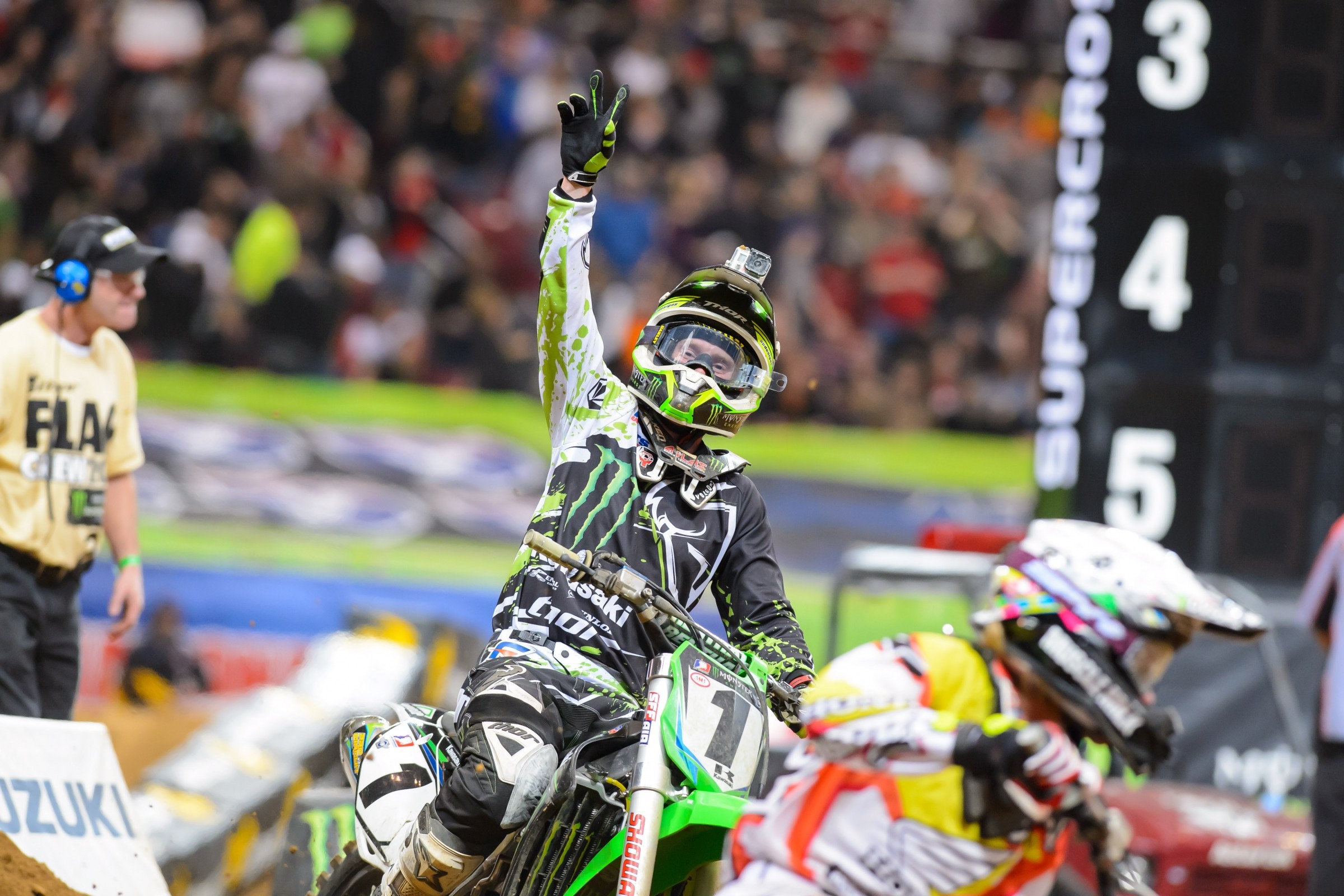 There’s just something about St. Louis. This round of Monster Energy AMA Supercross seems to always be one of the wildest, strangest, and most interesting of the series, despite the fact that it usually comes late on the calendar. For this week’s List, we’ll run down some of those peculiar—even spectacular—events. And we start with the first race there, which was also the most significant!

St. Louis made its AMA Supercross debut in 1996 as the second-to-last round of the fifteen-race series. At that point Team Honda’s Jeremy McGrath, the reigning four-time champion, had already clinched the title. He also had a perfect season going, 13-0 at that point, with a straight shot at the perfect season. McGrath was at the peak of his power, and it seemed all over before the race even started … but that’s why they hold the races. Instead of winning St. Louis easily, Jeremy found himself in a four-way dogfight with Kawasaki’s Jeff Emig, Suzuki’s Mike LaRocco, and the Great Western Bank Kawasaki team’s “Factory” Phil Lawrence. Emig, the hometown hero, had only won a single supercross in his career at that point, and a tainted one at that—several top riders, including McGrath, skipped the ’95 Las Vegas SX after the stadium lights quit working. Emig raced anyway, saying he owed it to the fans and his team, but it was a somewhat hollow victory.

He got the real win, and much more, in St. Louis. Over the course of twenty frantic laps he battled McGrath, LaRocco, and Lawrence for the lead and found himself out front in the stretch. Despite enormous pressure, Emig won; McGrath’s perfect season was over. (McGrath would go on to win the season finale, giving him fourteen wins and a second for the season.) Emig used the St. Louis win as a launching pad for the summer, taking the 250 AMA Motocross Championship from McGrath in another nail-biter, then winning both titles in 1997. And it all started in St. Louis.

In 1999, rookie sensation Ernesto Fonseca was lighting up the 125 East Region, dominating on the #100 Yamaha of Troy YZ125. But the St. Louis main event was about to be a historic one, not because of Fonseca’s prowess in supercross, but because Kelly Smith was one lap away from becoming the first KTM rider to win an AMA Supercross. But Fonseca was closing fast, and the two touched just after the white flag. Smith crashed out of the race, within a minute from that historic win. Fonseca kept going and ended up with the victory.

Thankfully, Smith would get in the record books with two different wins. While he lost that shot at becoming KTM’s first AMA Supercross winner—Grant Langston would get it at Dallas 2001—Michigan’s Smith would become the first KTM rider to win both an AMA National (High Point ’00) and an AMA Arenacross.

St. Louis 2006 was a super crazy night. First, Makita Suzuki’s Ricky Carmichael suffered a broken rear shock collar, giving him a rare DNF. Then Kawasaki’s James Stewart crashed out—a not-so-rare occurrence but a costly one this time, as he would have taken a commanding points lead from Carmichael. The beneficiary of all this drama was Yamaha’s Chad Reed, who won for the first time in seven races and jumped from third to first in the AMA Supercross points standings. Before St. Louis the series had been a two-man duel between Carmichael and Stewart, but from there on out Reed was in the title mix. They took it all the way to the last race in Las Vegas, where Carmichael would end up 2006 AMA Supercross Champion, and Stewart would end up 2006 FIM World Supercross Champion, and Reed—tied in points with Stewart—would lose because James held the tiebreaker of having the most wins.

One year later Reed and Stewart were right back at it, taking shots at each other with takeout moves as their bitter rivalry hit the boiling point. The recipient of their combined lack of focus on the checkered flag was none other than Ricky Carmichael, who was only racing a part-time schedule by that point as he transitioned into retirement. As a result, his forty-eighth and final AMA Supercross win would come in St. Louis. As for the rest of the 2007 series, Stewart would end it on a seven-race winning streak, unifying the AMA and FIM World Championship belts.

One year later St. Louis was the site of another crazy night of racing, this time with the focus on the Lites class. GEICO Honda’s Trey Canard had stunned everyone by winning the first three SX races of his career—and over two-time AMA 250 Motocross Champion Ryan Villopoto to boot. RV clawed back out of the hole by winning three in a row, and the title would be decided at the seventh and final round of the East Region Championship, which just happened to be St. Louis. The two found themselves at the front of the pack battling for the lead, and the title, when they touched in the last corner and Villopoto’s Monster Energy/Pro Circuit Kawasaki bounced out of the berm and slammed into the stanchion that held up the finish line structure. Canard would claim the race and the title, though RV would get even by going on to win the AMA 250 Motocross Championship—his third straight—later than summer.

The 2009 St. Louis race was interesting but not necessarily historic. Travis Pastrana came back out of his early retirement, having been invited by Feld Motor Sports to design and build the track. By most counts he did a good job, though the highlight was seeing him backflip a small berm, as he didn’t qualify for the main event. Chad Reed won the 450 main, while then GEICO Honda rider Blake Wharton won the 250 main, thus becoming the first Texan to ever win an AMA Supercross race in this class. (Finishing second and third, coincidentally, were the star-crossed Austin Stroupe and Nico Izzi.)

The next year, both Reed and Stewart were out of the championship picture due to injuries, and the now 450-mounted Villopoto was making a run on points leader, and rookie, Ryan Dungey. RV needed to win St. Louis to keep his title hopes alive, and Dungey needed to beat him to squelch them. Dungey led, then Villopoto nailed him with a block pass so hard that it took them both down! Villopoto got up in first with Dungey right behind, and they kept charging hard on a rapidly-deteriorating track. Villopoto landed in a rut so deep that his tires made contact with the concrete floor, causing him to spin, lose speed, and come up way short on a big jump. He broke his leg in the crash, and Dungey cruised past for the win and the title.

Fast forward to 2013 St. Louis, with Villopoto now the reigning Monster Energy Supercross Champion, and making a controversial pass on James Stewart while both red-cross and yellow flags are being displayed at the same time. RV was also penalized earlier in the race for a separate infraction, but this time the race got red flagged due to the rider that was down, which meant a staggered restart. The AMA/FIM officials decided to let RV take his penalty right then, rather than after the race, like we recently saw with both Jason Anderson and Ryan Dungey. Villopoto quickly moved back up and passed Stewart for the lead, through the red-cross flags. No penalty this time—the different flags being out at the same time were deemed confusing. Hence the new rule, where the red-cross flag trumps all, and the penalty is delivered after the race, and without appeal. That’s the one that caught up to Dungey a few weeks ago in Detroit. Yup, St. Louis’ history of crazy races has had a real impact on the sport!