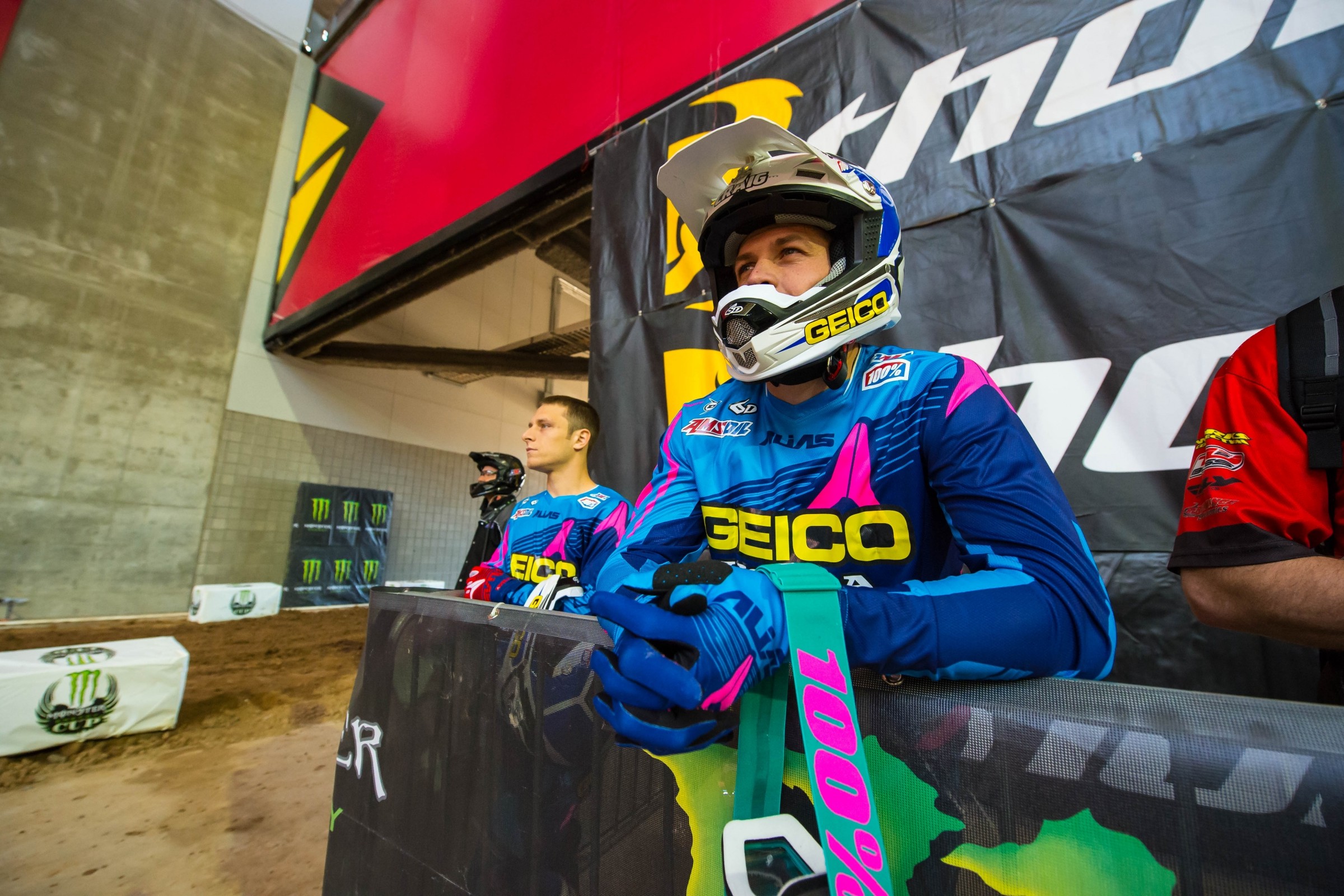 For a team once known for blowing up the model on amateur support—and locking everyone out on the first-round draft picks—GEICO Honda is now winning with veteran free agents.

A decade ago the team embarked on an ambitious plan to finally turn the tables on long-time 250 dominator Monster Energy/Pro Circuit Kawasaki. PC was a perennial powerhouse, but morphed into a complete domination unit when 250 four-strokes took over, as Mitch Payton got the jump on everyone. GEICO Honda decided to go a different route—with the riders—by using its pro budget to sign amateurs a year before graduation. The first selection was Trey Canard, who was pried away from Team Green (so, yes, that was an instant shift in power if you assume Canard would have been Pro Circuit bound through Team Green Kawasaki. But Team Green did have Austin Stroupe graduating at the same time, which seemed like a solid pick back then). Canard delivered instantly, winning the 2008 250SX Eastern Region Championship in his rookie pro season. Two years later, Canard won the 250 National Motocross Championship for the team. By then, the squad was stocked with power—Justin Barcia, Eli Tomac, Blake Wharton, Justin Bogle—and everyone else was locked out.

That’s a pretty easy model to follow, so now other brands are on it. Team Green is still Kawasaki’s amateur arm (and when you consider that Carmichael, Stewart and Villopoto all came through that system, it is still, by far, the most successful amateur program ever) but appears to have an even stronger tie to the factory Pro Circuit unit, witnessed by long-term amateur-through-pro deals for Adam Cianciarulo and Austin Forkner.

Yamalube/Star Racing Yamaha has made the biggest push, getting Jeremy Martin and Cooper Webb and letting the race wins rain down, and Aaron Plessinger could be next. Now KTM is heavily invested via the Orange Brigade unit and Troy Lee Designs.

GEICO Honda is still a big player in the amateur game, too, making a run at a variety of talent from other brands, and locking up Chase Sexton, who would love to make up a Webb/Cianciarulo style equation against Forkner. We’ll see.

Plus, GEICO Honda still has young guns RJ Hampshire and Jordon Smith in the ranks. Both have shown potential and seem one big break away from a breakthrough—they have the talent, for sure, it’s all about putting those puzzle pieces together now.

GEICO Honda has won two 250SX races this year, but they’ve won with vets. Christian Craig and Malcolm Stewart are retreads. They were available to anyone at any time. One was retired, one was without a ride. If the Canard/Barcia/Tomac gang represented first round draft picks, Craig and Stewart represent free agents taken off the waver wire. Anyone could have had them—but GEICO quietly snapped them up as projects, and now that’s paid off big time.

Craig got in because of family ties—he’s married to Majkrzak’s daughter, Paige—but the speed and results this year dispel any idea that he got the ride without deserving it. Actually, no one has ever doubted Craig’s talent. That’s why Troy Lee Designs Honda signed him as a young prospect, but injuries knocked him down and he never really recovered—until he had to work a regular job and found the motivation to race again. Everyone knew if Craig ever got everything straight, he’d be a legit contender. That’s where we’re at today.

Few ever doubted Malcolm’s skills, either, except maybe himself. On his end, he always seemed to be in it for the fun of it, and the pressure to be great would only rest on his big brother James. Sure, Malcolm put in effort, and so did Craig, but neither seemed entirely consumed with winning races in their younger years. Malcolm found himself without a ride at the end of the 2014 season, as he missed the last half of the season with extreme dehydration and other physical issues (ironically, he found himself racing for the Troy Lee Designs team as a replacement for Craig, who was dealing with chronic injuries).

In late 2014, Malcolm showed up for Red Bull Straight Rhythm on his own bike—and his brother’s Seven graphics—and told us he’d race at Anaheim as a privateer if that’s what it took. For a moment, he even took the challenge to James and nearly beat him in the event—although many, like Travis Pastrana, remarked that the result simply came down to Malcolm not really believing he could beat James.

It looked like Malcolm’s ship might have sailed, but at the same time he appeared more motivated than ever—maybe being knocked to privateer status will do that. Maybe nearly beating his brother in his strongest event—Straight Rhythm—gave him confidence. He, like Craig, just needed one more shot. GEICO Honda had a few riders banged up before the 2015 season, so they called Malcolm. He then won his first-ever race in Oakland. This year, he’s combined his old speed with a newfound consistency, enough to take the East Region points lead. From the scrap heap, to the top of the mountain.

Racing is strange that way. Anyone who ever watched Malcolm or Craig ride could tell them had the talent to win races, but it was almost like they were the last ones to believe it. The physical talents were in place, it just took some special circumstances for the mental game to come around—and when it did, the effort and commitment came with it. You know what they say: you have to believe it before you do it, but you have to do it before you can believe it.

Now they’ve done both. It’s a lesson the next set of young riders can look to for inspiration.