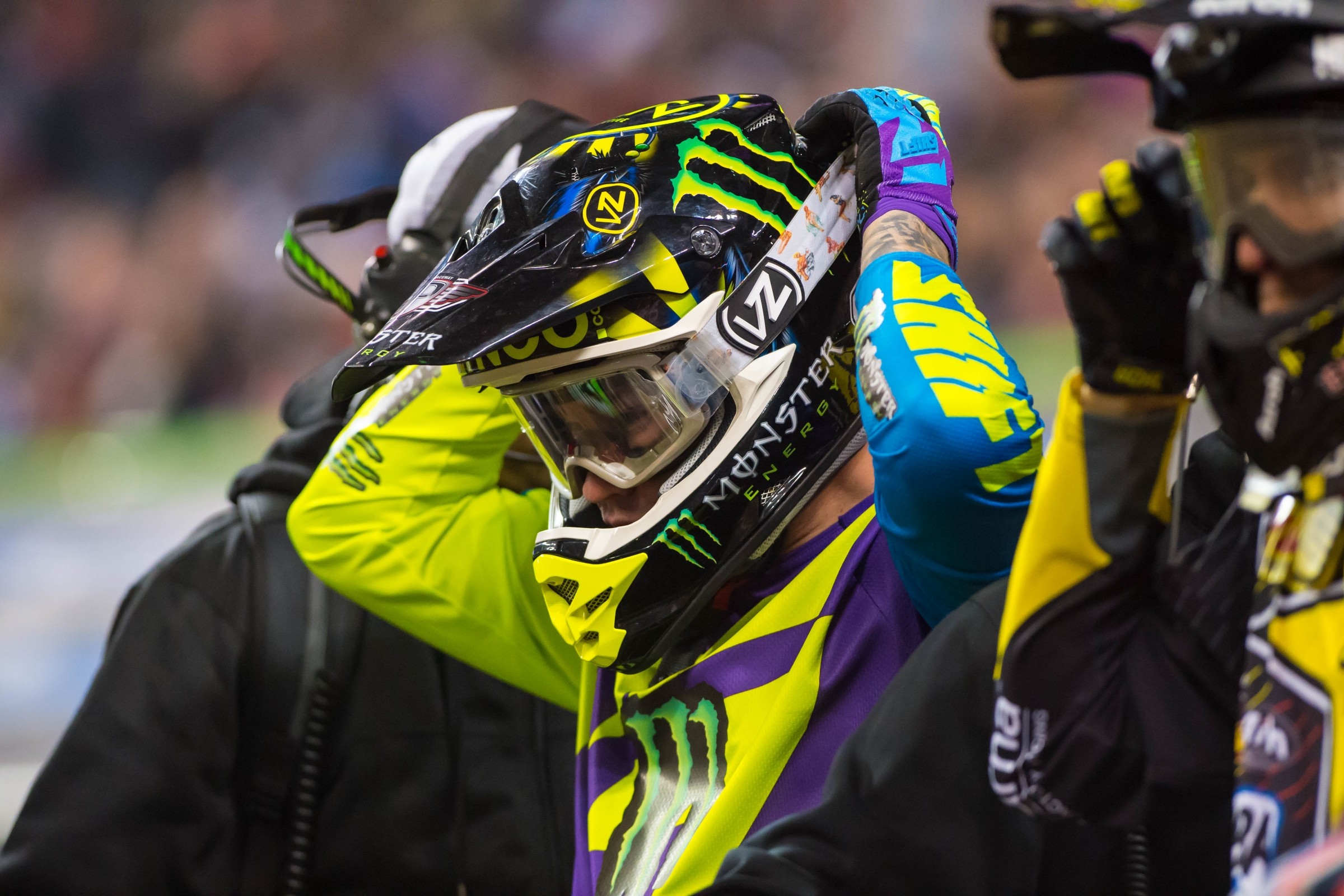 Racer X: The race got over and they’re tearing the track down right now, but we’re walking through the whoops. What were you checking out?
Marvin Musquin: When I go back to the tracks I always think, I wanted to check out the whoops. That’s the first time I checked the whoops. You don’t realize how bad they are when you ride it or when you’re in the stands. It’s good to see. Enjoy a little bit after a long day, and the rough day that I had.

This is one of the gnarlier sets of whoops we’ve had this season, do you think?
Not really. Anaheim 2 was pretty bad. They were just not that big but steep, really steep and cupped out, and not so much traction. So that’s why we were spinning off the whoops.

Aside from just spinning out in the corner on the last few laps, what were your thoughts about tonight’s race?
To get third here in Detroit [Musquin moved to second after Dungey’s penalty], coming into Detroit I knew it was going to be a tough one because last year was a little bit of a struggle on the 250 here just to find traction, but obviously I did better on the 450. We worked hard on the team. To be third right now, should have been a second obviously without the crash, but that’s racing and things happen like that. But four weekends in a row on the podium, that’s awesome.

So you said you guys were kind of expecting it to be dry coming in. What did you and the team do to prepare for that?
Not many things. Tried to work on the suspension a little bit. But then the rider obviously makes a big difference. But the pace of the bike is obviously really good right now. I’m doing a lot better in the beginning of the season and it shows when I’m riding. I’m happy.

What were the major differences between doing that step-on, step-off as opposed to doing it as a quad?
It was a big quad, pretty easy to do, but I just didn’t put it out all day. I was just scared of it. I never went for it so I was actually scrubbing, so I was not losing much time. I was getting into the turn with a little bit more speed compared to the other guys because I was tripling out. Other than that, like I said, being able to kind of follow Ryan [Dungey]… he was pulling away from me but not half a lap ahead of me, so to be able to be not that far off Dungey on that kind of track, I’m happy.

I just talked to Ryan too. He said even though you guys are putting in a lot of work down there you’re having fun at the same time. Does that kind of play a part in there or is there something in the water down there?
It’s tough during the week, easier on the weekends right now. We’ve just got to be focused during the week. The tracks that we have in Florida, Ryan and Jason [Anderson] are going pretty fast and sometimes I’m a little behind. Mentally it’s tough because you want to be fast, but it’s only practice and you’ve just got to do the work and be consistent and focused. Then when we get on race day the race track is always more technical and because there’s a lot of riders riding it makes the track rough. I’ve been doing good the last weekends. So when you look back in November when I was getting my wrist fixed and having surgery on that and then getting back on the bike, I was struggling. So we put in some good work with the team, the bike, and me and my condition and everything and now I’m riding happy. It’s a big improvement. To do four times on the podium right now it’s awesome for me.

Racer X: What happened? You jammed up your ankle?
Josh Grant: Yeah, the heat race I just slammed it on the finish line trying to slap the freaking jump and ended up rolling my ankle.

How was it first round on that Kawi?
It was good. For being on the bike for a couple days, I felt good. Qualified decent. The track was kind of gnarly for me. The whoops were pretty hammered. But for not racing all year I feel like I’m doing pretty decent.

Where was your fitness level coming into this? I know you’ve been riding a little bit.
Not that great. Like I said, I started training a little bit before Daytona, so I’m not quite there. But I made it through. I had some good lap times at the end so I was happy with that.

Once you jam your ankle up, fitness kind of takes a little bit of a back burner right?
Yeah, it was more of just riding and getting through it. It feels good though to make it through the race.

You going to try and take it easy a little bit?
For the next couple days and then back at it.

Racer X: Pretty good day overall aside from a little run-in beginning of the main event. But you fought back, had a pretty decent race after that.
Tyler Bowers: Yeah, it’s really good. A lot of improvement. The past weeks I’ve been starting up front and then throwing a fade on. I think tonight I just loosened up a bit. It’s crazy; sometimes you go a little bit slower and you go faster. My whole goal last weekend and this weekend was just quit putting so much pressure on and go out and ride my dirt bike, have some fun. Let this Pro Circuit Kawasaki do all the work, and it’s been working. I came out last week with a heat race win. That did a lot for the confidence. Let me know that I knew what I was doing again.

This weekend started out with a heat race win again and went into the main. Like you said, in the main event the first turn I got caught up with [Jeremy] Martin and went down. I just got stuck on his bike. I think him and I were pretty much last and dead last. So I just started clicking off laps and let the riders, letting the pass come to me and ended up in like fourth. My mechanic Ollie put fourth on the pit board and it actually surprised me a little. I was like, Oh, damn, I didn’t know I made up that many spots already! Started tearing it up a bit because I could kind of see third place ahead of me so I tried to catch him but just ran out of time. But I’m okay with running out of time. I’ve been running out of steam and I didn’t do that tonight, so I’m happy with that. Didn’t get passed at all today, which is what I used to ride like. Just try to keep on this rollercoaster here and ride it out. Got a little bit of a break and hopefully go into these last five rounds with a little bit more fitness and get back up front.

Anything you changed up recently?
Just riding loose. I was riding way too tight and just putting too much pressure on it. I would get pretty crummy starts at Atlanta and Daytona and then I would just ride so hard and make passes and stuff, just push the edge. So I was riding tight and holding my breath. I just pushed too hard at the beginning and I’d pass up into like fifth or sixth, but then I didn’t have any energy by the time I got there. I was holding my breath the whole time and just forcing the issue too much. So the last two weekends I was like, just have fun. The points, I’m pretty far down on points. I did an 8-10 and then last weekend I was in sixth and then crashed on the last lap and ended up eleventh. So 8, 10, 11, I was pretty much out of the championship hopes. So I was like, let’s just start trying to click off some wins here. Start with a heat race and a realistic goal and we’ll go from there. Got the heat race wins and just started riding looser. As I said earlier too, my Monster Energy/Pro Circuit Kawasaki, I quit overthinking it and let the bike do the work. The thing’s been just running great and handling great. I quit overriding the bike.

Technical track tonight. You made a ton of passes. What sections were you making those passes in?
The whoops were huge [for me]. The whoops were key. There was a line all the way on the left side of the whoops. The team had been yelling at me all day about it. “You’ve got to get back over to the left.” I just never felt like fighting the bike all the way back over to the left side of the track. But in the main event that was the line. I went a little bit slower going into the whoops and just focused on getting all the way back to the left, and the line was a lot better and a lot smoother over there. They weren’t as cupped and rutted out over there. I just was clipping passes left and right on that side. That was a big deal. And then just trying to be smooth. There were a lot of guys just kind of running into each other and getting kind of hectic, so I just tried to be smooth. I would get onto a couple guys and they would be battling and I would just kind of wait for them to take each other out and then I’d go around the outside of them or something like that. So I just let the pass come to me. But the whoops was definitely key.