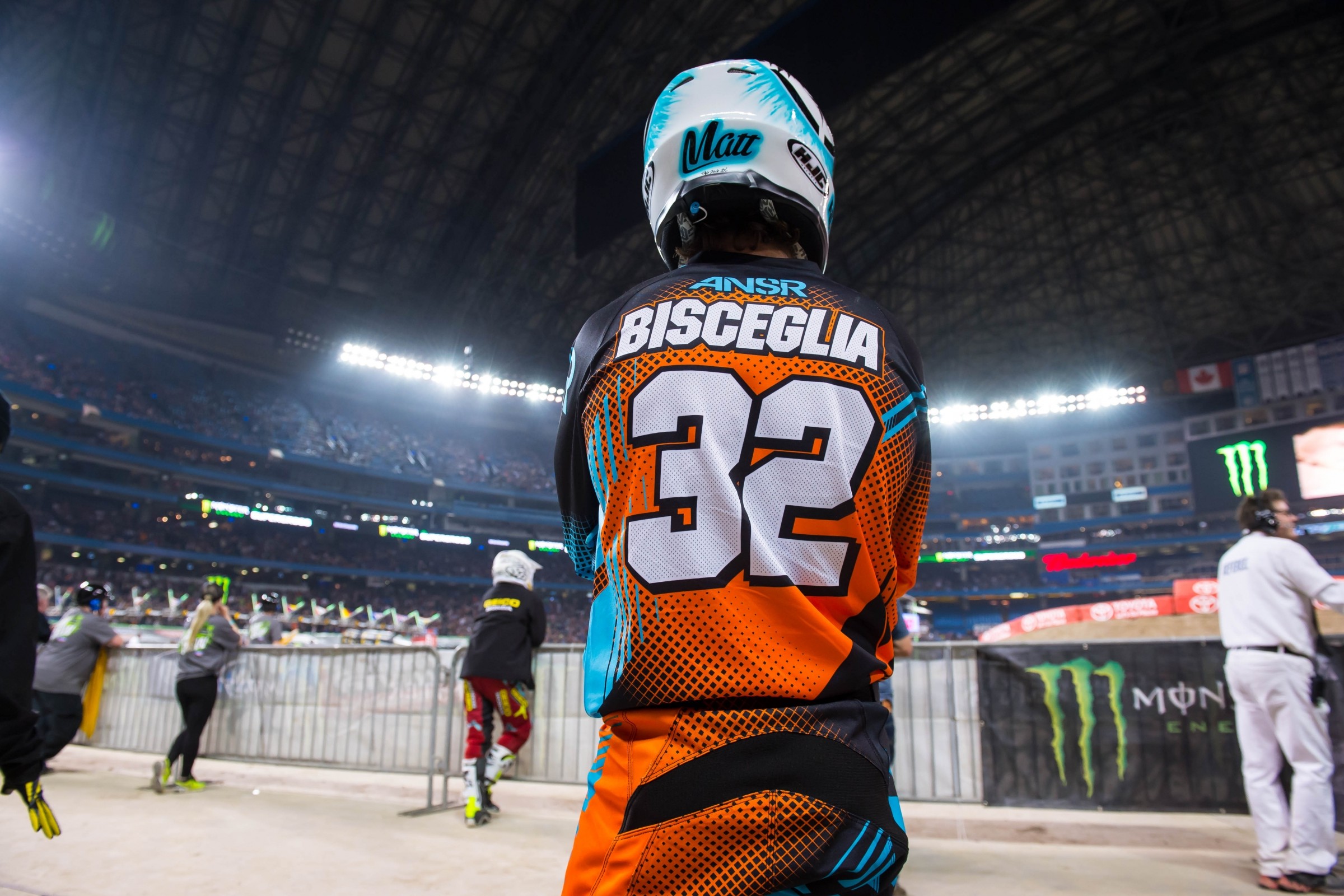 1. Do we take anything from the 250SX East Region from that Toronto main or do we just chalk it up to chaos?

Jason Thomas: I think we have to take Justin Hill's ride into account. He was the fastest qualifier and was as solid as it gets in the main event. He had been building up to this in recent weeks and looked ready to take command in Toronto. As for the rest of the results, Jeremy Martin ended up second after crashing on the start and walked away with the points lead in the process. Mookie fought through crashes, bike issues and an improvised jersey alteration to salvage a sixth place finish. Everyone remained well within this title fight and after such a wild night, which is good news for the fans.

Steve Matthes: Yeah, what JT said. What a nutty race for everyone out there and although riders like Alexander Frye and Jesse Wentland deserve full props for putting in some great results, it was such a massive tire-fire that everyone who got out alive (or with some good points if you want to be less dramatic) should be thankful. Maybe Wentland, a guy that's been very good at all three races takes this result and builds on it, but to me the real winners are Justin Hill (duh) and Jeremy Martin, who somehow salvaged a second. Confidence is everything, especially with younger riders, so this win has to help Hill out. Martin's got the red plate but we'll have Martin Davalos back this weekend to get into the middle of everyone and mix up the points.

Jason Weigandt: Hill’s win is totally legit. He’s been fast the whole time and just needed the right break to get a win. As for everyone else, this race was too nutty to figure out what it means. I’m pumped for Matt Bisceglia and his team to get a podium, it’s great to see Frye and Wentland get in the top five, and it’s amazing that JMart came all the way back to second. But dudes were crashing and flatting all over the place, so I can’t take too much from this except to tell these dudes they did a good job and see them try to do it again in Detroit.

Thomas: I am going to say no. I had a talk on Friday night with an elite level 450 rider and we talked about this very subject. I expected him to struggle again in Toronto because I didn't feel they had solved any of the issues. Daytona is a totally different animal and each year the results will reflect that change. Toronto was back to the standard issue supercross and alas, Tomac's struggles resurfaced. He is bouncing around between different suspension systems weekly and seems to be struggling with his late race laps. Daytona masked those problems but as we saw in Toronto, they are still problems.

Matthes: Well, in the course of one day he'll be back and then not and then back again—so I don't know. Tomac looked great in Toronto all day long until the third lap of the main event. If he had won any other event other than Daytona I would say he's back, but Daytona is so different that we can't just chalk up his victory there to figuring things out. Did I think that switching to a different fork system the race after you won is bold? Yes, I told the Kawasaki guys and John Tomac that very thing in the truck on Saturday before the night show. They said: "But it works better" and then I was quiet and got my coffee. This Tomac "thing" has been weird for sure but I stick with the fact I think he'll pull out of it and get some more wins. And JT, when you say you were talking to "an elite level 450 rider" you can just say "Chad Reed."

Weigandt: So he’s back to being not back? At first I thought the race was a disaster for Tomac but I talked to him afterwards and he didn’t seem too upset. He feels like he’s still way better than he was earlier in the season. But riders at that level rarely just have “off” nights where they fade from first to fifth for no reason. Hearing a rider just struggle and not know why is kind of scary. So I’d be a little worried here. Really, he didn’t look awesome in Atlanta, either, after an early crash. Dallas wasn’t great either. If you just take Daytona out you’ll see the overall trend hasn’t changed much. Uh oh.

3. Dungey had a three-race win streak that ended at round four and no one has won two straight since. Has the 450 class gotten less predictable?

Thomas: I think it is still predictable but maybe not for the top spot. Dungey has a sizable lead and I think his desperation to get out front has dropped a bit in comparison to earlier in the season. He seems a bit more content to finish on the podium, especially if he can finish ahead of Ken Roczen, his closest competitor in points. The hard work has been done and although I know he still wants to win every race, the focus is on bringing this championship home. His starts are so consistent that I think he will still win 3-4 races down the stretch but I also think he may be more willing to sit back and take a second or third place finish when he has to. Managing a championship is a valuable skill and Dungey has it mastered. He won't take any unnecessary chances and as long as he keeps Roczen under control, he will win when it's there and take the smart route when it's not.

Matthes: Hey, Dungey's only won two out of the last five races. Let me dig up the panic button here! We spoke about this in the Racer X Podcast Toronto SX wrap up and maybe we're in the era where you can't just rip through the pack and grab a podium. Maybe the Cole Seely's, Marvin Musquin's and Jason Anderson's of the world are too good to catch from the back for guys like Tomac, Roczen and Dungey. I'm not sure right now; we have too small a sample size. But stay tuned.

Weigandt: I’m going to go to my grave saying Dungey doesn’t just settle for podiums or take seconds and thirds. I’ve been at most of his professional races in person and I’ve never seen him not win a race and still be happy because he scored solid points. He wants to win!

It’s definitely less predictable. A month ago it was easy: just bet on Dungey. Lately these other guys have stepped up. When the season began I think Dungey was just slightly better prepared, slightly more confident, slightly more on his game. Now some others have hit mid-season form and can take him from time to time. They’ve also learned the hard way that Dungey’s early laps are now his strength instead of his weakness. Dungey had the lead briefly in Dallas, Daytona and Toronto, and those dudes were desperate to get back around.

In the averages though, week-to-week, he’s still the best guy overall, which is why his points lead keeps growing. He and his KTM also make for the most consistently good starting combination. I don’t think that Dungey has backed it down because he has the points lead. I think he wants to win races exactly the same way he did earlier in the season. I just think the other riders are better than they were a few weeks ago, and that’s why it’s more competitive.