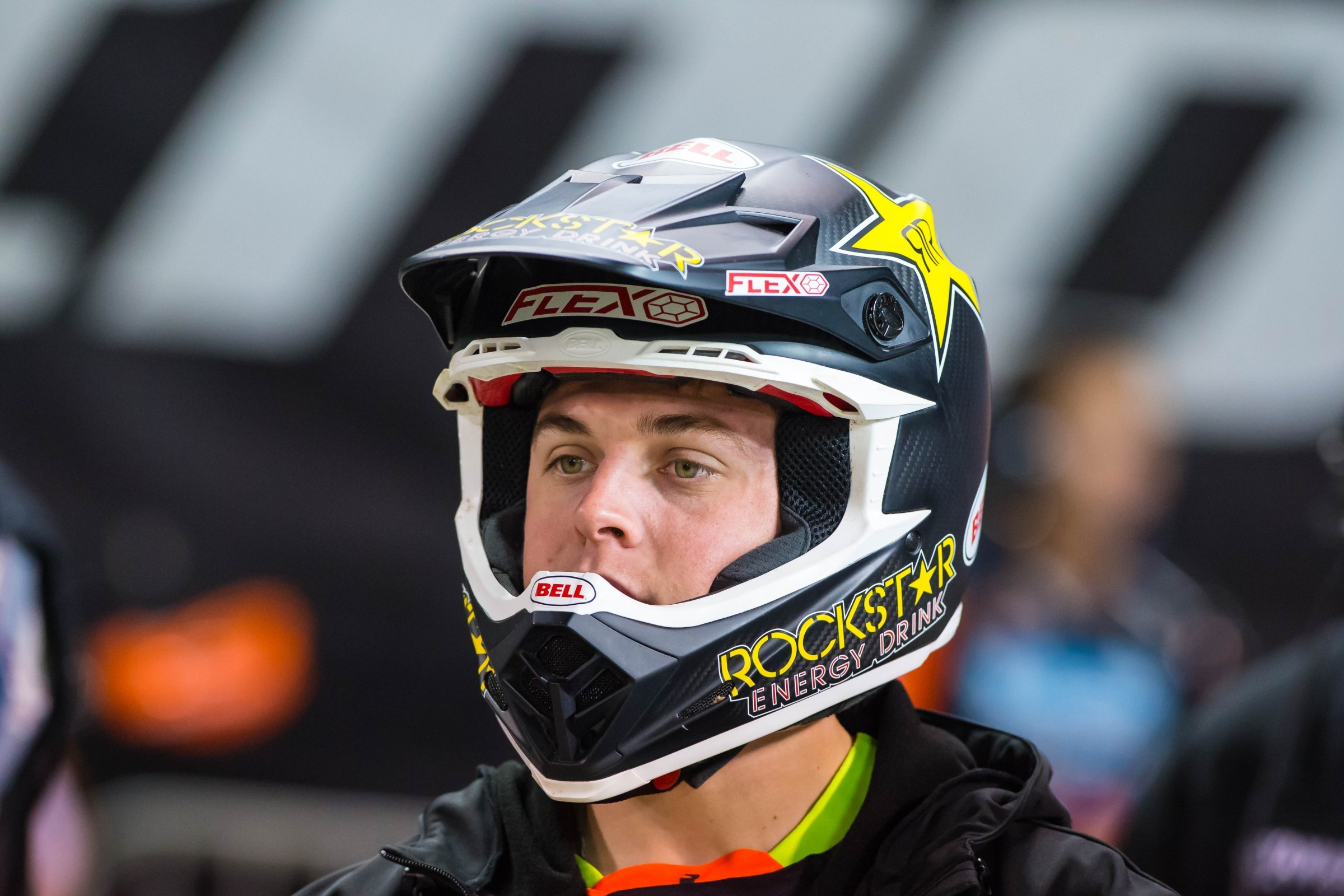 Even before the first gate drop on Saturday, the weekend was a trying one for Rockstar Energy Husqvarna. 250SX East Region points leader Martin Davalos would miss the race with “personal issues,” widely believed to be a problem with his visa. Further, Christophe Pourcel sustained a small crack of his vertebra during the week and missed the race. Suddenly, the three member team was reduced to one. And it got worse in the 450 main, as Jason Anderson was the first rider to get scooped up in the Justin Bogle crash. Although Anderson would rebound to finish ninth, it was his worst finish of the season. “I felt like I put myself in a good position,” he said in a team statement. “My starts have been better. I came out around sixth, but the guy who got the holeshot looped out when I was in the air and I hit his bike. It definitely wasn’t what I was planning, but at the same time I made the best of it. Luckily I’m healthy after that and put in 20 good laps. My whole front end was crooked, but all-in-all it wasn’t the worst time.”

Also caught up in the crash was Honda HRC’s Trey Canard, who looked poised for his first main event win of the season after qualifying fastest and winning his heat race. Canard’s run of bad main event starts, which started last year, continued in Toronto and did him in again. He would salvage seventh on the night. “It’s hard to come from the back, which seems to be the theme of my year, but I think I rode well so it is what it is,” he said in a team release. “We just need to keep focusing on what we can do better.”

As we reported on Sunday, Chad Reed is “banged up” after his crash in the 450 main event, but hopes that he’ll be able to race this weekend in Detroit. “Appreciate all the get wells and concern I'm a little beat up but I'll be all good and ready to try again in Detroit,” he wrote on Twitter. The finish was the worst of the season for Reed, who now sits seventh in points.

The utterly brilliant rides of Yamalube/Star Racing Yamaha’s Jeremy Martin (first turn pileup to second) and GEICO Honda’s Malcolm Stewart (first turn pileup, two pits stops to sixth) certainly deserve their merits. Lost in the melee of those rides was an amazing performance from Rick Schugel Racing’s Jesse Wentland. Coming off a career-high eighth just one week ago in Daytona, Wentland overcame a second turn crash to capture his first career top five finish. He was understandably a little emotional when talking to our Steve Matthes after the race. “After crashing in second turn … it was mayhem the first few laps. To come all the way back to fifth—I amazed myself. I don’t do it very often, but I broke down in tears after the race. I didn’t think I would get that far up and I’ve never finished that far up. It was a dream come true, pretty much.” To read more about Wentland, check out last week’s Privateer Profile.

Ryan Dungey was winning races early in the season by trading his old “diesel” rep for something more like a nitro-burning dragster. He was out sprinting everyone! Ken Roczen matched up in that department in Toronto. Kenny logged 54s from laps 1-6 and got away. Dungey and Eli Tomac, who were trading second and third, each only had one lap in the 54s during those first six laps.

Toronto’s scoring data only divides the track into two segments, where most tracks are divided into three or four segments. For what it’s worth, Roczen had the fastest time in the first half of the track, and Musquin was fastest in the second half. Both set those fastest times on lap three. All about the sprint, people!

MAD Racing/Dirt Candy Suzuki’s Matt Bisceglia wasn’t even sure if he would race the 250SX East Region opener due to off-season shoulder injuries—the latest coming just weeks before the opener. He certainly wasn’t ready. But he raced the opener anyway and toughed out an eleventh place finish. He had his troubles in Daytona finishing nineteenth, but bounced back for his first podium of the season in Toronto. “It was a long off-season for me,” he told Race Day Live’s Andy Bowyer. “I had a couple injuries and about … four and a half weeks ago I was in the hospital getting surgery. It’s a miracle I’m even here. The first couple rounds I wasn’t quite ready; I’m just getting ready week by week, doing what I can to get up here.” This is actually Bisceglia’s third career podium—the first coming in two productive seasons at GEICO Honda—and his first since Las Vegas in 2015.

Flat tires are still apparently a thing. It’s hard to remember a recent main event that featured two contenders bowing out of the main with flats, but it happened in Toronto. First, Troy Lee Designs/Red Bull KTM’s Shane McElrath got a flat while running in second behind eventual winner Justin Hill. Later in the race, GEICO Honda’s RJ Hampshire also got a rear flat. We suspect McElrath’s flat came from a rock (the track had quite a few buried in the soil) but Hampshire’s was the result of all that first-turn carnage. “I had a good start but then I got tangled up with everyone,” Hampshire said in a team statement. “I was trying to come back through and I felt good, I think I was up to around tenth but someone’s footpeg sliced my tire in that early crash, I felt it going down on me throughout the moto. I thought I could just roll around and get it to the finish, I was back in fourteenth, but we went in for a pit stop. Just going to forget about the night and go on to next weekend.” McElrath finished eighteenth with Hampshire in twenty-second.

Tyler Bowers finally looked like the rider we saw early in 2015 in Toronto. He caught and passed Jeremy Martin to win his heat race and was running third before a crash in the main event. He fought back to fifth, before being passed by Jesse Wentland on the last lap. Bowers tried to go back after him and crashed huge, he would get up slowly and finish eleventh. Despite the setbacks, Bowers is happy with the night. "Tonight was an improvement, I felt really good in practice and had a good plan for the night, which paid off with a heat win,” he said in a statement. “I tried to stick with the same plan and keep it smooth for the main event, when I decided to make my move for the lead I made a mistake and went down. I picked myself up and fought back for as many points as possible.”

Good thing Bowers is a tough dude. He survived not only two crashes in the main event but this rag doll in practice.

Last season in Las Vegas, Vicki Golden became the first female to qualify for the night program in more than four decades. On Saturday in Toronto, Golden did it again, qualifying thirty-seventh out of forty-two riders (the top forty advance to the night show). Golden would fall short of her ultimate goal—making the main—after finishing nineteenth in her heat and seventeenth in the LCQ. After the race, Golden wrote on her Instagram about the accomplishment: “I've had such a rough journey to get to this point. Wanting to quit came across my mind many times but accomplishing your goals makes it all worth it.”

Rookie Benny Bloss’ fill-in roll with CycleTrader.com/Rock River Yamaha continues to be successful. The former Horizon Award winner secured his first career top ten with a seventh in Toronto. “Started the main in neutral and somehow made my way to 3rd, ended up casing a jump pretty bad and rolling my bars back, went off the track, got back to 4th and crashed, ended up 7th overall and am tied for 7th in points,” he wrote on Instagram after the race. “A little disappointed but improving every weekend.”

The most amazing thing for Bloss was his start. When the gate dropped his bike was in neutral, which left him last, until about eight riders crashed in the first turn and he rolled right past them! Then some other riders crashed and by the end of the first lap he was in sixth. And he started half a straight behind everyone!