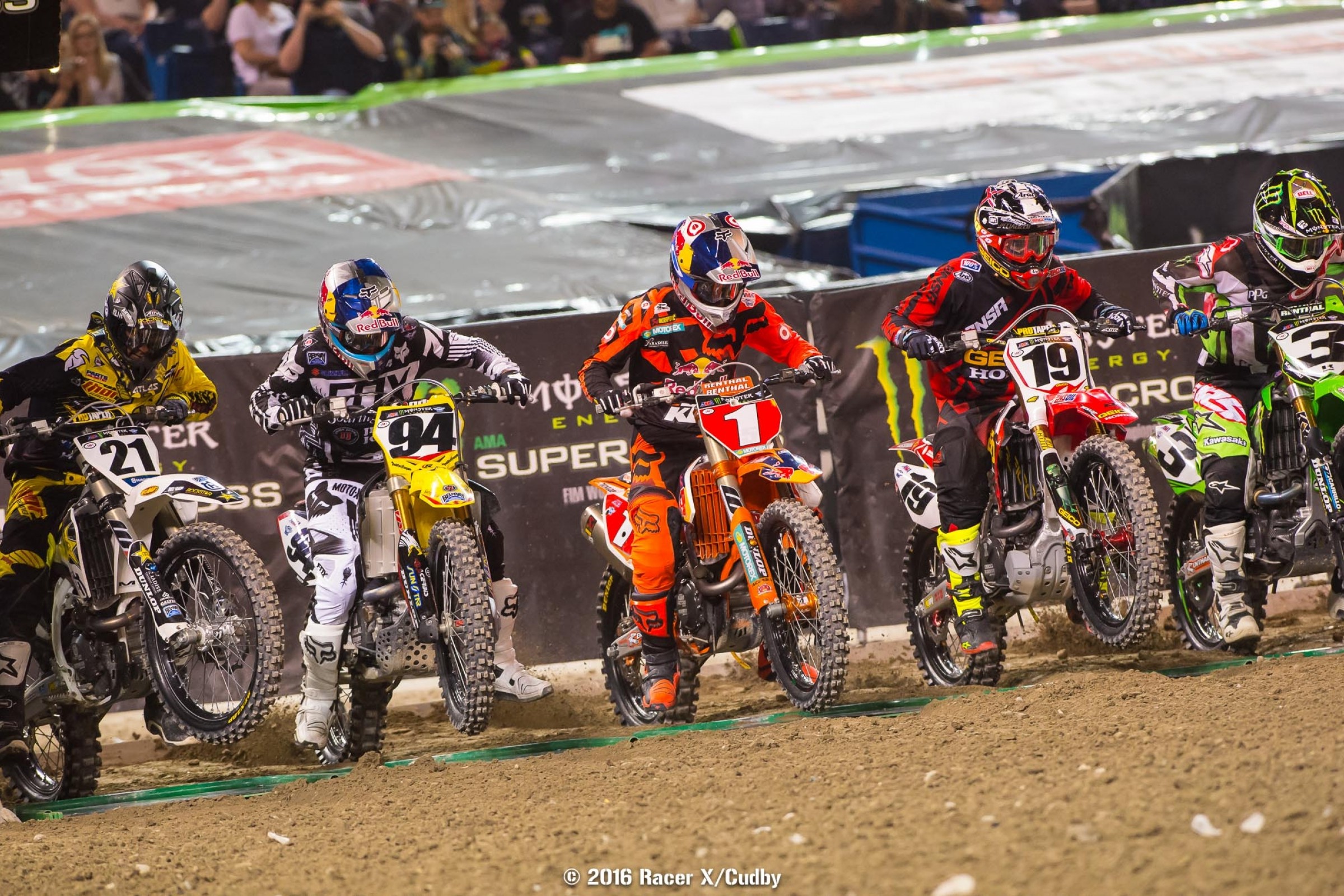 Hey, remember back in December when we all thought this would be a close, tight, unpredictable, deep field? Well, have a look at the last four races, which feature two wins by Soaring Eagle/Jimmy John’s/RCH Suzuki’s Ken Roczen, a near-win by Red Bull KTM’s Marvin Musquin, a Daytona win by Monster Energy Kawasaki’s Eli Tomac, and a win mixed with solid consistent results by Ryan Dungey. That five pack has been mixed up every week, plus Chad Reed had an Atlanta podium, and others like the Honda HRC duo of Cole Seely and Trey Canard are fast, BTOSports.com KTM’s Justin Brayton has been in there, as was his teammate Davi Millsaps before an injury last week. Seriously, the last four races have been what we wanted to see all season!

Roczen’s win is proof of the new level of unpredictability. His Dallas win seemed to signal a turnaround, but then his starts were terrible the last two weeks and he ended up deep in the pack. Then it was Eli Tomac coming in with the momentum after Daytona, and of course Dungey has been a machine. So who would have thought that Dungey would lead this one early, Tomac would pass him for the lead, but then Roczen would knife past them both to pull away for the win? You just can’t figure out what’s coming next right now! On this night, Roczen was rock solid, no doubt. But does it mean he’ll ride like this next week? We don’t know!

“Tough track out there, even the start was really slippery, I made some good passes happen at the beginning,” said Roczen. “The track was tough and got really cupped out, it was really all about maintaining focus. Haven’t changed my lately. I’ve kept it steady [lately]. Just needed to get good starts.”

Justin Bogle actually grabbed the holeshot on his GEICO Honda but then totally blew the first rhythm lane, over jumping a triple and landing in the face of the next jump, and then crashing in front of the whole field. Bogle was plenty willing to take the blame for that one, saying he ended up on the opposite side of the track from the line he had been using all night, and basically mistimed the jump. Luckily he was okay, but he ignited a huge pileup, and also damaged his bike beyond repair, ending his race.

This left Dungey in the lead, but Tomac dove underneath and stood him up with a block pass, allowing Roczen to sneak under. For a moment Tomac had the top spot and a shot at two wins in a row, but then Roczen passed him, and Tomac started going backwards, eventually to fifth, with Justin Brayton getting on him at the end of the race. We talked to Tomac and he didn’t have much of an explanation. “I don’t know what to say, I just kind of got shuffled back after Roczen passed me there,” he explained. “No finger to point at anyone but myself—I wasn’t the same guy in the main event that I was in the heat race. My heart race spiked early in the race and I never recovered. It was unlike any other race I’ve had this year.”

Once Roczen passed Dungey and Tomac he was gone. But don’t think Dungey is just resting on his points lead. He tried pushing hard to catch back up to Kenny and ended up sliding out. He didn’t crash but lost time, allowing his teammate Musquin to get by him and steal second. Musquin has been riding really strong as of late, and when Dungey tried to reel him back in, the Frenchman held strong for a solid second. “I held off Ryan all the way to the end, unlike in Atlanta,” said Marvin with a laugh.

Dungey’s third is his worst finish this year. Read that back again. The podium finish also makes history, as he now has the all-time supercross record of 26-straight trips to the box.

Cole Seely rode solid, not quite able to catch Musquin or Dungey ahead of him, but he did get Tomac to net fourth. Behind Tomac, Brayton and Canard were chasing each other. Canard almost caught Brayton, but Brayton kept pushing and caught up to Tomac, and all three were close coming across the line for fifth sixth and seventh. Brayton was happy with his ride but feels he let the race get away from him by taking a bad line through the whoops for the first few laps, and that’s what allowed Seely to get away from him.

The 250SX main event was perhaps one of the craziest races in recent memory and in the end, TLD Red Bull KTM’s Justin Hill stood atop the podium with his first win of the season. It was the second 250SX win of his career at that. Hill was really fast at the first two rounds of 250SX this year coming from the back and it was a forgone conclusion that if he got a start here in Toronto, he could walk away with this one.

And he did just that here with a massive lead but was also helped by a first turn crash that took down GEICO Honda’s Malcolm Stewart and Yamalube/Star Yamaha’s Jeremy Martin among others. Hill made the pass on his teammate Shane McElrath early on and stretched out his lead to over twenty seconds at one point. Hill’s ridden very well at all three rounds and sits second in the points. After the race he told us he’s happy with the win, but is keeping it all in check because his real goal is to get the points lead.

The race saw McElrath run second for a while before a flat took him out—at one point the TLD boys, with Hill, McElrath and Alex Frye, running in formation in second, third and fourth early. The Hill and McElrath were running one two before McElrath had to go into the mechanic’s area for a change. That gave second to MAD Racing/Dirt Candy Suzuki’s Matt Bisceglia who’s had a rough start to the season. Matt ran second for a while until Martin came from way back to pass him for the runner up position. Bisceglia held on for third, a big turn around for his season.

It was an amazing ride by Martin and allowed him to take the red plate in the series as points leader Rockstar Husqvarna’s Martin Davalos didn’t race due to a “family issue” that’s widely believed to be a travel VISA issue. Jeremy’s charge was something to be seen and props to him for overcoming adversity to lead a 250SX series for the first time in his career.

Stewart pulled into the mechanic’s area twice to fix his bike that was running poorly. The team cut a wire on the ignition (believed to be a kill switch) and fixed the issue. Malcolm overcame that crash in the first turn and two stops in the mechanic’s area all the way to sixth. Great ride by him and quick thinking by the team.

Monster Energy/Pro Circuit Kawasaki’s Tyler Bowers looked much better in Toronto than he had when he won a heat and early on in the main ran third. He crashed at one point, dropped back to around ninth before working up to fifth. But then privateer Jesse Wentland passed him for fifth on the last lap and Bowers ended up crashing a few moments later—and ultimately ended up ninth.

As far as flats, McElrath got one, and so did GEICO Honda’s RJ Hampshire, who told us he cut it on a footpeg in the first turn crash. Hampshire cruised around early on with one before pulling into the pits as well. Last time this many flats in a SX main event? How about never? Weird deal here in Toronto.

Privateer RSR Honda rider Jesse Wentland has been fast to start the year even with a DNF at the opening round with a crash. In Toronto the #63 fell in the second turn and still worked his way up to a career best fifth place behind another rider with a career best in Alex Frye. Great rides by both riders—golf claps to them.

Martin’s teammate Aaron Plessinger crashed off the start in his heat when Stewart cut over on him and then was forced to the LCQ to get into the main event (which he won). From there he was involved in that first turn crash and didn’t have a great night ending up in 12th.