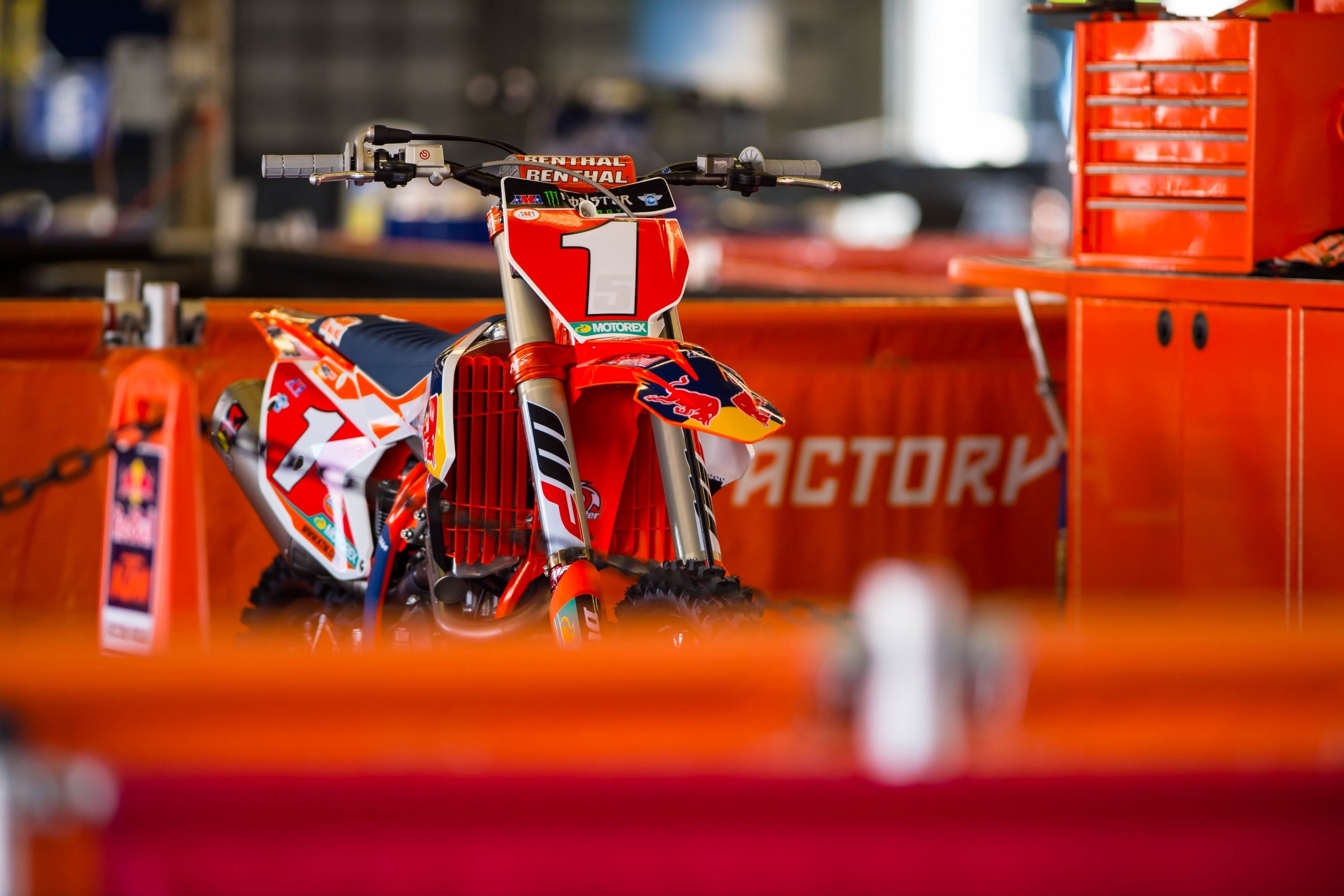 by aaron hansel and chase stallo

After starting out the year in the 250SX Class, Motorcycle Superstore Suzuki's Kyle Cunningham decided to keep racing during the break by joining the 450SX ranks. After just one day on the bike he finished eighteenth in Atlanta, then pulled in fifteenth in Daytona, despite riding without a front brake, which was damaged on the first lap. Now that he's got more time on the 450, how well can he do in Toronto? - Aaron Hansel

If you’re a fan of Eli Tomac, you’ll say he was destined to win sooner or later. If you’re not a fan, you’ll say he only won because he’s good at motocross and excelled on Daytona’s outdoorsy track. Either way, the win probably gave Tomac a big shot of confidence, which is something he’ll be putting to work this weekend in Toronto. If he wins again on Saturday night, he’ll hand Ryan Dungey his first back-to-back loss of the season. – Hansel

If you’d have told Malcolm Stewart he’d go 2-4 in the first two rounds, he probably would have been okay with it. Well, that’s exactly what’s happened, but we can guarantee he’s not pumped on it. He went down while closing in on the leader in Atlanta, then led twelve laps in Daytona only to stall his bike in the last corner while running third. The season is still young and Malcolm is only five points out of the lead. We’ll see if he erases the frustration of the first two rounds by winning in Toronto. -Hansel

After taking second place in Daytona Justin Hill told Racer X’s Jason Weigandt he thinks he can “run away with it” if he’s able to get a good start. And after looking at the lap times, it’s hard to argue with him—Hill had had the fastest lap of the race and consistently put in faster laps than winner Jeremy Martin. Keep an eye on Hill when the gate drops this weekend—if he’s up front we just might have our third winner in as many races out east. –Hansel

Anyone who’s had the flu knows how crippling it can be, and that includes Aaron Plessinger, who only rode one day during the week before Daytona after coming down with a nasty case of it. Amazingly, he still managed to snag fifth, which is extra impressive considering the additional physical demands of Daytona. There are more podium guys than podium spots in this class, but if Plessinger is feeling 100 percent we like his chances for getting back on the box, and perhaps even battling for his first career 250SX win. -Hansel

Shoulder injuries have limited Blake Baggett to just two main events in 2016, a year after he competed in all seventeen rounds of Monster Energy Supercross and all twelve rounds of Lucas Oil Pro Motocross last year. Baggett returned at Daytona after missing the previous four rounds and disclosed after the race that his fitness isn’t quite there yet: “I had pretty good starts. I had the speed, but just faded,” he said in a team statement. Coming into Daytona, Baggett rode just four times—and only the week prior. He said he hopes to gradually get his fitness back as he gets more time on the bike. Let’s see if another week can result in his first top ten of the year. – Stallo

Most circled Jeremy Martin for a win at Daytona—the more outdoor-sy track playing to the likes of the two-time defending Lucas Oil Pro Motocross Champion. And he delivered after a near fifteen lap duel with Malcolm Stewart. But if Martin is to win his first supercross title, he knows he needs to win at the more typical supercross rounds as well. He told us after the race that with the help of Johnny O’Mara, he’s changed his riding setup to do just that. “I’ve learned that the way I set my bike up for outdoors works great for outdoors but it doesn’t quite always work for supercross. If you always look in the past you see a lot of the good guys that have been able to figure out supercross make the same transition I’m changing. I’m moving the bars up a little more. Can’t have that sag [with the rear suspension] quite as low.” Can Martin make it two in a row this weekend? - Stallo

It’s been a tough couple weeks for Honda HRC’s Cole Seely. After a well-publicized run-in with Jason Anderson in Atlanta, Seely was involved in a first-lap pileup in Daytona and had to come from twenty-first to tenth. “It was a rough day for us, all around. I was struggling in practice and transferred through the semi, so I had a horrible gate pick,” Seely said after Daytona in a team statement. Seely’s found the podium three times this year, but not since a second place at San Diego II. Can he bounce back this weekend? – Stallo

Monster Energy Supercross heads north of the border for the first time since 2014—where James Stewart dazzled in a come-from-behind performance, his win marking the 49th of his career, moving him past Ricky Carmichael. That night was special for Justin Bogle as well, who won his first career 250SX race en route to the 2014 title. It also marked the end of the season—and the beginning of a rough three years— for Adam Cianciarulo when he injured his shoulder. The race even marked the first podium in the career of Matt Lemoine. Will we see any more monumental moments this weekend? - Stallo