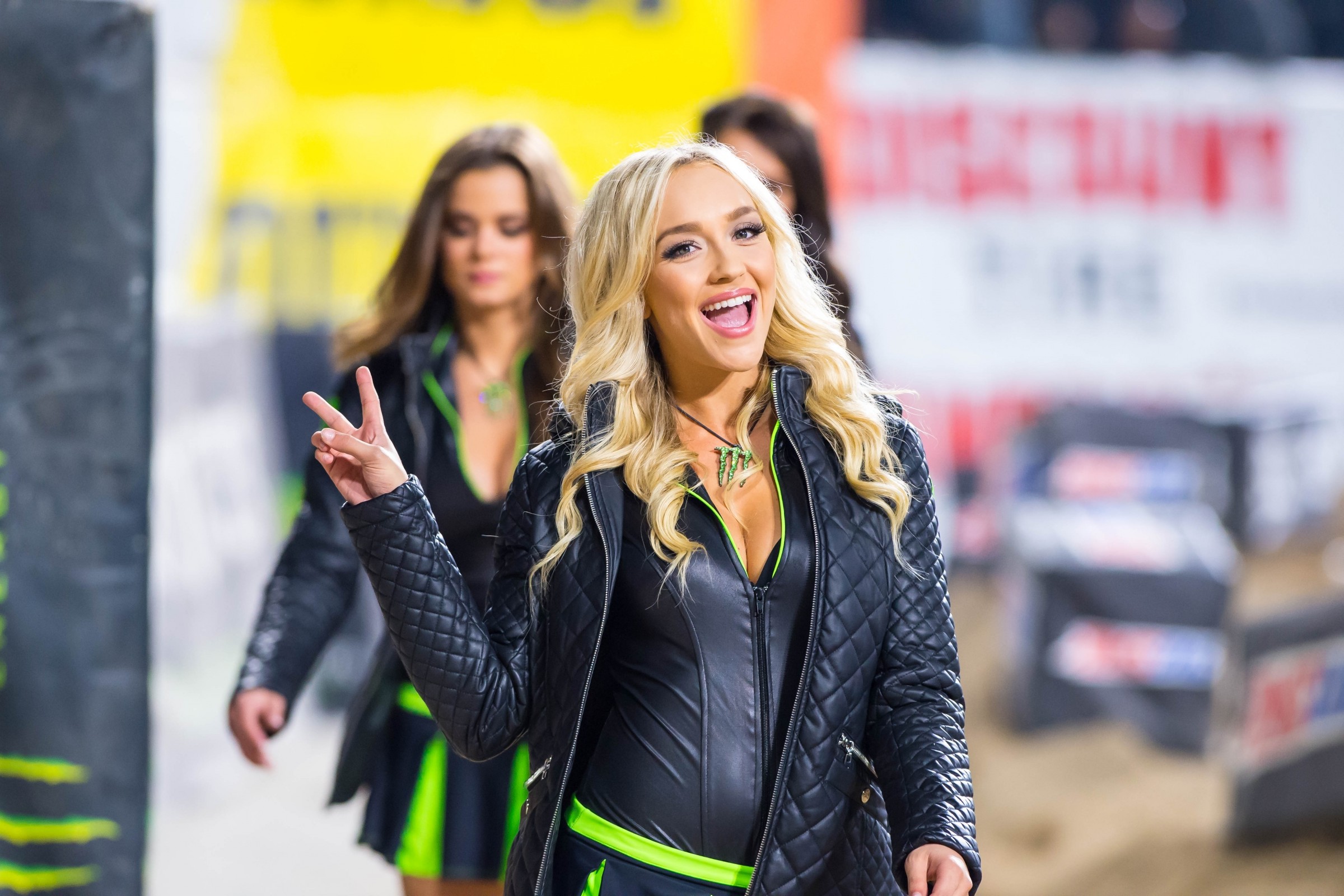 If you’re headed to Daytona this weekend for the Daytona Supercross by Honda, or Bike Week or Ricky Carmichael’s Amateur Supercross, you’ll undoubtedly notice a new and improved Daytona International Speedway. The $400 million facelift the venue, which originally opened in 1959, received was well needed and debuted at the recent Daytona 500. The NY Times recently ran a profile on the changes and why the venue now holds less people.

What the new speedway does not have are the 46,000 seats that were on the backstretch. Like many new stadiums and arenas, Daytona is buying into the notion that less is more, with several other racetracks having already downsized. The new speedway will accommodate what it did when it opened 57 years ago: 101,500 fans.

Chitwood believes that there will not be a revenue dip and that the financial difference will be offset by increased and upgraded concessions and food offerings, more and markedly better luxury suites, and, of course, finding creative ways to bring in more corporate sponsorship money.

There is a lot more to these changes, which you can read about here.

Brain Farm recently released a behind the scenes video of their new virtual reality series developed for Samsung Gear VR. Video junkie or not, this is a cool look at how it was created.

We've heard over and over that the mental game is a huge part of this sport. Money, pressure to win…riding a 200-plus pound machine that can literally snap you in half, tends to wear your mental psyche down. Feld Motor Sports and Fox recently ran a cool piece on what motivates riders of Monster Energy Supercross. It was a pretty open and honest look at what drives these guys. The funniest though, was one of Chad Reed’s answers: “My kids, probably my eldest, Tate, [Ryan] Dungey is his favorite guy. And he says, “Dungey’s gonna win,” and I can tell you there’s nothing more motivating than your kid telling your Dungey’s gonna win.”

The Red Bull MotoGP Rookies Cup was established in 2007 as a way to give young kids experience in Grand Prix racing. Although the series has changed from its inception—like moving from the 2-stroke KTM RC 125 to the KTM RC 250 R 4-stroke in 2013—it is still going strong and has provided many stars for Grand Prix Racing. In 2009, Vice ran an eight-part documentary on the series. Check out episode 1 below.

Suzuki and Volkswagen were once supposed to have a tie up on the automotive side, but now the divorce is finally complete, according to a report from Auto Blog last week. The German automaker, which originally took a 19.9 percent stake in Suzuki back in 2009, was ordered in August 2015 to sell its stake after the partnership turned sour. There’s also this, which forces Suzuki to pay VW as well…

In the final settlement to end the companies' disputes, Suzuki agreed to pay VW an undisclosed amount for not living up to the agreement to use the German automaker's diesel engines. While they won't disclose the exact sum, Suzuki said in a statement that the money "will not have any significant impact" on its 2015 fiscal year results, which will end in March.

The arbitration court took the biggest step to end this transcontinental partnership in August 2015 when the body ruled VW needed sell its 19.9-percent stake in Suzuki. However, the Japanese company wasn't entirely off the hook because VW was still allowed to sue for damages over the diesel engine issue. This latest decision finally clears up that dispute.

Like most marriages, the union between VW and Suzuki began with stars in both parties' eyes. The Germans paid $2.8 billion to buy 19.9 percent of the Japanese company in December 2009. VW was supposed to get greater access to the auto market in India, and Suzuki hoped to capitalize on access to its partner's advanced technology.

You Have to Watch this World Superbike Pass

I know very little about the world of Superbike racing. All I know is that this pass on the final lap, to win the effing race, ON THE FINAL LAP, is SO SICK. Defending World Superbike Champion Jonathan Rea made the stunning pass at the second day of the opening round of the 2016 World Superbike at Phillip Island in Australia last weekend. (Rea also won the first day.)

Side Car Motocross is Insane

Yep, not gonna do it. Not a chance.

The latest installment from Ken Block was released on Monday. At the time of this writing (Thursday morning) it’s already racked up more than 6 million (!!!!!!) views on YouTube. If you’re not one of those 6 million, I suggest you watch.

The final round of the Monster Energy Arenacross Tour (yes, the series Josh Hansen was competing in before pulling out due to a problem with the promoter) took place last weekend in London. And oh my God, it was insane. Thomas Ramette, Cedric Soubeyras and Cyrille Coulon went crazy. After the race, the sanctioning body reviewed all the footage and disqualified Coulon. Ramette ended up taking the championship. And guess what? All three are expected to race Daytona this weekend. Get the popcorn ready!

Side note: This may be the best commentating I’ve ever heard.

According to a report by Food Drive, Monster Energy has purchased American Fruits and Flavors, the company’s primary flavor ingredients supplier. With the deal, worth a reported $690 million, Monster now owns intellectual property related to flavor development. More from the report:

This grants Monster opportunities that other energy drink makers — and beverage companies in general — don't have by putting new flavor technologies directly into Monster's hands. An in-house flavor department reduces costs and increases earnings, but it also provides an advantage with the flexibility to control flavor development.

As consumers, particularly millennials, demand more beverage flavor innovation, that limitation can hinder a manufacturer's growth potential. Currently, energy drink flavors tend to be dominated by fruity varieties, but having the flavor technologies plus Monster's resources under one roof could foster a new wave of tastes.

Pastrana Is A Robot

Getting Social in the ATL

- Jimmy Albertson has certainly used the power of social media to his advantage throughout his career, so it’s not shocking that he ranks second with 17.8K.

- Tyler Bereman, who hasn’t raced since 2013 due to injuries, but has made a new career in free riding, tied with Jeremy Martin for third.

You’ve probably already read Jason Weigandt’s piece on how the NASCAR Holeshot Challenge came together. (If not, check it out.) The man behind it all was none other than Andy “Rev Up” Bowyer, once a columnist for this very site. I’ve had the pleasure of knowing Andy for almost six years, and if you’ve ever read his columns, you know he is one of the most passionate guys you will ever come across—a heart squarely on the sleeve guy. Andy’s moved on to bigger things—hosting Race Day Live and running social media for Feld, and putting this together—so it was really cool to see him succeed in his venture and have his story covered by such a big outlet as USA Today. Congrats, Andy.

A small piece from the USA Today feature.

The NASCAR Holeshot Challenge — a dirt-bike drag race prior to Saturday night’s Monster Energy Supercross main event in front of 65,000 people and a national TV audience — was Bowyer’s brainchild. And he was worried about what exactly could happen when brother Clint Bowyer raced fellow NASCAR drivers Greg Biffle, Ricky Stenhouse Jr. and Ty Dillon.

“For the fans, it’s exciting,” said Andy Bowyer, an employee of Supercross promoter Feld Entertainment. “For my pulse, I’m a little nervous. I’m going to remind them, ‘Guys, let’s keep our heads here.’”

If he was nervous then, his heart sunk four hours later when Clint never let off the gas in order to edge Biffle at the line, then went over a lip at the end of the track and smashed into a soft barrier (the faceplant has been replayed on social media countless times in the days since).