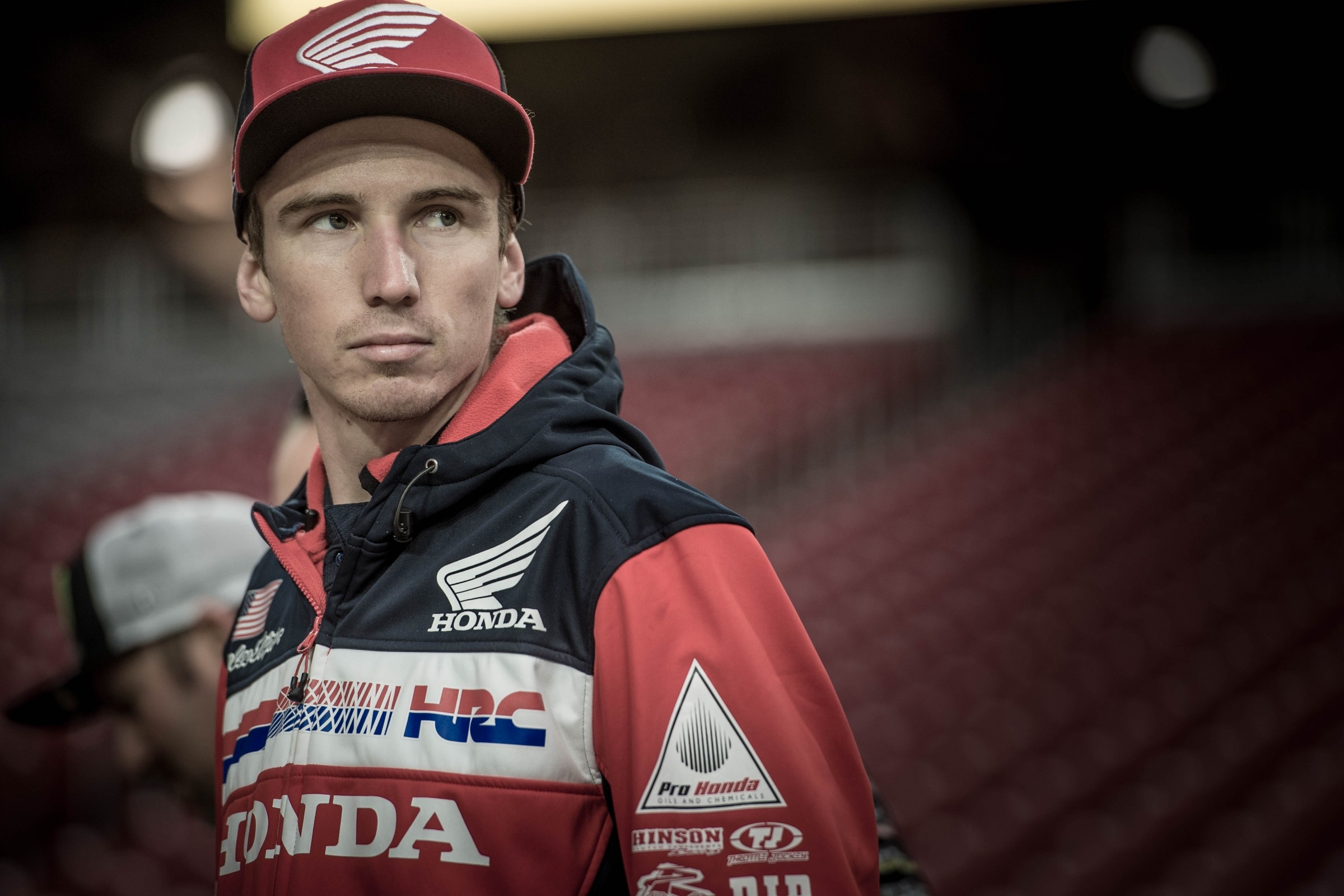 Jason Anderson has been running on the razor-thin line of aggressive and dirty all season (or for longer, depending on which riders you ask). He’s played with fire and a fuse, but nothing blew up until Atlanta.

Not surprisingly, Cole Seely was the one who got hot. Seely has been on the receiving end of plenty of aggressive Anderson passes through the years, but he’s categorized all previous contact from Anderson as “just racing.” On Saturday, Seely was hit twice by Anderson, and, combined with an incident off the start with Ryan Dungey, he’s finally had enough.

“Yeah, I think I owe Dungey one and I owe Anderson two,” Seely said to our Steve Matthes. “Off the start, I don’t know what Dungey was thinking. He just decided to not let off. I had a complete half a bike length on him, went to turn left, and he just never let off. When he hit me he pulled my clutch down, like completely pointed at the ground, and then put me in neutral. I was riding really good. I had really good times. I was going fast. I had a really good night going, and then making my way past probably six guys and then got to Anderson. When I caught him and passed him, he took me out.

“I passed him and then he brake-checked me basically and it took us both down,” he added. “When I got remounted I was making my way through and I slowed down a little bit when I caught up to Bogle and stuff, trying to make moves on those guys. Then we all kind of got bunched up again. Jason was actually able to pull up alongside of me and I shut him out once, but nothing major. And then two turns to go he just completely T-boned me. I was heated. Luckily I didn’t find him after the race because I was about to do some things that probably would have not been good for me. Then he came over about an hour after the race and tried to apologize but I just told him that I didn’t want to talk to him. I respected him a lot because we fought really hard for that West [Region] championship two years ago and I think we have a lot of respect from each other because of that. Now I have none for him. I basically just want to retaliate the rest of the season.”

Anderson has learned a lesson and gained an enemy. All year he’s talked about trying to find the line between making things happen but not pulling “bonehead moves” like he did as a rookie. Seely was really mad after the race, and when we spoke to Anderson, he seemed to understand that he had gone too far. We, like most of the supercross world, missed Anderson’s last-lap takeout on Seely, as the Dungey/Musquin/Stewart situation further ahead drew most of the eyeballs, and also the TV cameras. In fact, when we approached Anderson to interview him after the race, we didn’t even yet realize an incident had happened on the last lap—but you could tell by his demeanor that something had gone wrong. Anderson has been living life on the edge, and while his aggression has helped him make some key passes this year, it led to his downfall this time.

“Yeah, it was definitely a hectic main event,” he said. “I had a good start and I was up there in podium position and then just got tangled up and fell. A lot of people hitting a lot of people. Got the bad end of it, got the good end of it. It’s not something I want to do every weekend.”

The first pass attempt by Seely, which we did see, came about halfway through the main event. Seely got a good drive over the wall and the whoops and got past Anderson and then held the inside in the next corner. Seely slowed to prevent Anderson from slicing back underneath, and Anderson squared up and hit him, sending both to the ground. They battled a few more times racing back through the pack, and finally Anderson lost his cool and took Seely down on the last lap.

“He came and I squared him up and then I clipped his back tire and I got squirrelly a little bit,” said Anderson of the first pass by Seely. “We just came together and I was cool with that. That was whatever. And then we came back through the pack and me and him were playing around again. The thing is, me and him kind of threw away a third and fourth. We were in the top five. I think we could have moved up. And instead of being seventh and eighth we could have been four, three. Even if he would have beat me, it would have been better than where we finished.”

Instead, Anderson admitted to us he’d let his emotions get the best of him. He cost himself more than a few positions in Atlanta, because there could be a higher price to pay down the road when Seely decides to get even.

“Yeah, [I’m learning] about the emotion part,” said Anderson with regret. “You’ve got to get rid of that.”