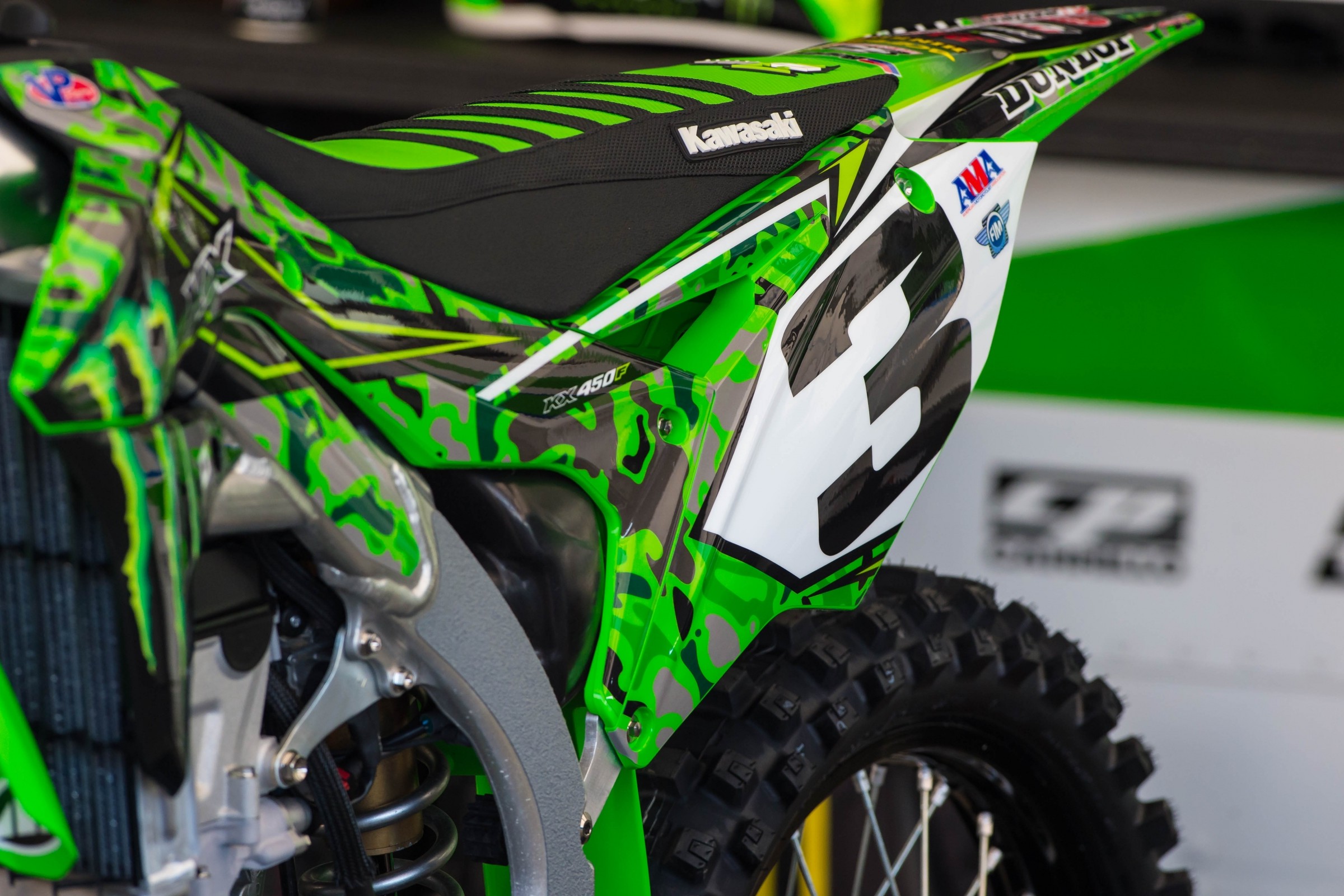 Although Glendale was two week ago, and no one probably even remembers that Cooper Webb won…oh, wait, he didn’t win. See what I’m saying. Anyway, Hookit provided some great stats from the race that we didn’t get a chance to feature. So, we’ll talk about them now.

With his win, Christian Craig took the top spot in 250SX with 40.6K interactions. Cooper Webb was second with 35.1K. Joey Savatgy was a distant third with 11.1K.

No surprise atop the 450 Class, as Ken Roczen had the most interactions with 280.4K. Chad Reed (182.3K) and Marvin Musquin (25.7K) were second and third. The big surprise was Ryan Dungey coming in at sixth with just 22.9K. The 450 points leader is typically always in the top three.

Another interesting development was Chad Reed gaining a growth of 11.4 percent. That’s a big number. Meanwhile, Ken Roczen had the top seven most popular posts out of any rider.

Ryan Dungey jumped back to second last week (and his posts rose from two to fifteen) with 156.4K interactions. Roczen was tops again, with Reed in third.

If you didn’t already know, Hookit is a digital platform created to support and connect athletes, brands, and sports. Hookit provides real-time rankings, data, and insights to quantify the talent and marketability of athletes for the industry.

Earlier this week, I received an amazing email from Jason Weigandt. The content of the email was unassuming: “use this for Word On” with a link attached. A couple days passed before I got around to scanning through all eight minutes. I don’t want to spoil it, so just watch and then read my thoughts below.

- 1970s freestyle was fantastic. Get some of that, McGrath.

- Breathtaking voiceover. The boys at DMXS sum it up best:

Amazing video. Epic narrator sounds like Art Eckman after an all nighter. https://t.co/Zt3p9ToSZ1

- Boy, this is a beautiful mullet:

Someone get him in the studio right now!

I ain't really no rapper but since ole @the722 broke he's stomper Imma drop a line. #healupsoon

Hey, You Can Own Ken Block’s Car

Star of the Gymkhana movies and co-founder of DC Shoes, Ken Block is one of the most popular car drivers in the world. And now you can own his Ford Fiesta HFHV Rally (Rallycross) Car. But it will cost you a nice chunk of cash. Ken’s team, Hoonigan Racing Division, is selling the car for £250,000, or a little more than $350,000. Jalopnik says the car has claimed “600 horsepower and 900nm of torque.” Here is some info from the sale.

The car was built to be used for Rally, Rallycross and Gymkhana filming and was based on a M-Sport build Ford Fiesta World Rally Car. The car was built in the UK but was updated and fitted with a powertrain to allow the car to compete on Global RallyCross rounds. It can run in both Rally and Rallycross specification (the sale will include the parts to convert the car to Rallycross specification).

If you’re feeling froggy and have a ton of cash, you can purchase the car here.

The second MotoGP test of the season is taking place this week at Phillip Island in Australia. The second day of the test on Wednesday was basically a wash due to weather, as most riders completed between twenty and thirty laps. “Honestly, it was a wash of a day for everyone,” Cal Crutchlow told Asphalt and Rubber. Most of the day centered on testing the new Michelin tires (which you can read more about here). The interesting part of the week to me was this report from Asphalt and Rubber:

A new figure popped up in Valentino Rossi’s garage in Australia, raising a few eyebrows. Former 125 and 250 champion Luca Cadalora is at Phillip Island, working with Rossi as a rider coach, to help him perfect his riding style.

Such assistance is common among other riders (Wilco Zeelenberg does it for Jorge Lorenzo, Emilio Alzamora for Marc Márquez) but so far, Rossi has not had anyone explicitly helping him at the track.

Rossi explained that he started working with Cadalora last year, when the pair of them had started riding together at Misano on the Yamaha YZF-R1. Cadalora has also spent time at Rossi’s dirt track ranch, riding and offering coaching.

“From that moment the idea was born,” Rossi explained, and he had invited Cadalora to come to the test. “First of all Luca have a great passion for motorcycles,” Rossi said, “but he’s also a very technical rider. When he raced, he was like this. He was very good for the setting and everything.”

Prior to the test in Phillip Island, Repsol Honda members Marc Marquez and Dani Pedrosa visited Indonesia for the official presentation of the team and to debut the new RC213V.

Ryan Sheckler has been in the skating spotlight from a young age, winning X Games gold in SKB Park at just 13. Since that time he’s won five more X Games medals, had his own MTV show—Life of Ryan—and become of one the biggest names in skate. Ryan isn’t the only member of the Shekler family, as his little brothers Shane and Kane also ride. Red Bull recently dropped a cool video about the brothers.

Fenway Park, one of the most iconic stadiums in Major League Baseball, and home to the Boston Red Sox, was recently transformed into a big air snowboard jump. Check out some cool videos from the event.

The life of two-time British MotoGP Champion Barry Sheene is coming to theaters. Based on the book Barry: The Story of Motorcycling Legend Barry Sheene, the movie will be written by Across the Universe writers Ian La Frenais and Dick Clement. Known in racing circles as the “original Grand Prix playboy,” Sheene personified racing in the 1970s—think James Hunt on two-wheels. Sheene lost his life in 2003 due to cancer. No release date has been announced.

Daily fantasy is an absolute dumpster fire right now. DraftKings, one of the leaders in the market, took another blow last week when Fox marked down the value of their $160 million investment 60 percent. From Awful Announcing:

Fox Sports made what was viewed as an “imperative” investment in DraftKings last July, bankrolling a $160 million commitment to the company that was crucial in funding its massive ad-buying campaign. But in its quarterly earnings report on Tuesday, Fox announced that it marked down the value of that investment by 60 percent. Over a period of approximately six months, the value of that investment had dropped by $95 million.

That’s not all. Last week ESPN announced that it’s exclusive relationship with DraftKings was over. Again, Awful Announcing has more.

The original advertising deal (reached on the heels of ESPN backing away from investing in Draftkings) – was announced last June came at the industry’s high point before the ground beneath them started cracking. The deal allowed DraftKings to become the official daily fantasy sports partner on all ESPN platforms and included content integrations on shows like SportsCenter. More importantly the partnership also blocked competitors from advertising on ESPN although that component only kicked into effect recently. The deal made DraftKings one of ESPN’s top 10 advertisers, as the DFS company put $200 million worth of ads into ESPN.

Oh, wait, there’s more. Frontline teamed with The New York Times and took a deep dive into fantasy sports and online betting. You can watch it here.

First published in 1964, the Sports Illustrated Swimsuit Issue has been one of the best selling magazines in history. As magazines continue to evolve, SI has dived into virtual reality with the latest issue. From Mashable.

The Google Cardboard-style viewer is part of SI's 2016 Swimsuit Issue and, when combined with the SI Swimsuit Issue app, allows users to take an immersive trip to some of the tropical locales featuring the magazine's swimsuit models.

The SI-branded viewer, which lays flat in the magazine like any other insert, took about 10 minutes to put together and even came with tiny lenses. Once constructed, the viewer was actually pretty solid and worked as well as any Google Cardboard device.

Circuit of Wales, a motor racing circuit and technology park in Blaenau Gwent, is about to get a big shot in the arm. Per Bike Social, the Circuit of Wales is set to announce that “insurance giant Aviva will foot a lion's share of the £300m bill needed to get the Ebbw Vale project off the ground.” More from the report:

According to BBC Wales, Aviva is set to cover a large amount of the circuit’s initial funding with an announcement from those behind the circuit, the Heads of the Valley Development Company (HOTVDC), expected imminently.

Despite not yet existing the circuit already holds a contract to host the British round of the MotoGP until at least 2019.

In the absence of a circuit, the HOTVDC are currently sub-letting the round to Silverstone and will continue to do so until they are ready to host their first event in 2018.

Goal of the Year