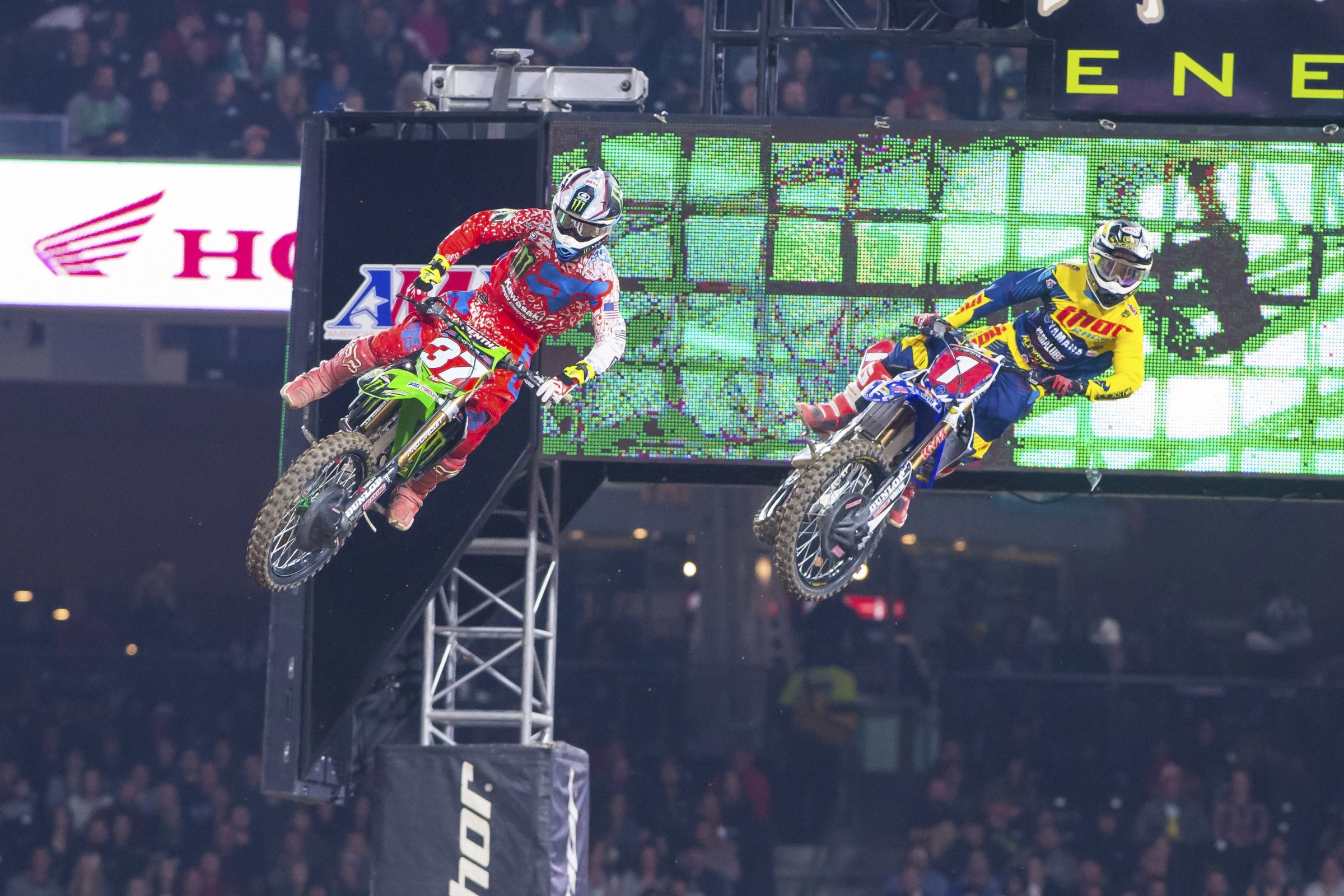 Joey Savatgy has taken sole possession of the championship points lead. If you were at the first three rounds of the series, it would have sounded crazy to hear that now. The only apparent explanation for such a turnaround in the points landscape would be an injury to previous points leader Cooper Webb, right? Not so fast, my friend. In racing, golden opportunities will present themselves from time to time. The real question is: Can you capitalize on them when they arise? Joey Savatgy has done just that.

At the first three rounds of the series, Joey was simply slower than Webb. Don’t feel bad for Joey, though, because everyone else was slower too. Webb was able to move through the pack and chase down anyone from Jessy Nelson to Christian Craig to Zach Osborne. Not only was Savatgy losing time to Webb, he was also losing points every weekend. In fact, his first three rounds saw him give up nearly an entire race win’s worth of points. Leaving Anaheim 2, Savatgy was 22 points down on leader Webb, and he had missed two out of three podiums with finishes of 8-2-4. At that point, he hadn’t really shown championship form. Then we arrived in Oakland and everything seemed to change.

In Oakland, Joey rode to the level that everyone expected all along. He was able to match Webb’s pace and although he wasn’t putting any pressure on the defending champ, he was certainly in the mix. It marked the first time that Webb wasn’t able to ride away from the field and when Webb’s bike rolled to a stop, it appears that his momentum in the series did as well. He lost 24 points to Savatgy that night, changing the entire outlook of the championship.

Webb could do no wrong leading up to that mechanical failure in Oakland and it seems like that one issue opened the floodgates for misfortune. In the two races since, he has crashed in both main events. Not big crashes, mind you, but small tip-overs that cost him a chance at race wins. In both cases, he was trying to make a pass on the race leader and lost the front end. That’s a very common mistake but it’s also a mistake we didn’t see at the first three rounds. More importantly, with the huge points loss in Oakland, he simply doesn’t have any margin for these errors.

You can see another way that this championship has changed by looking at the lap time data. At Anaheim 1, Webb was consistently two seconds faster than Savatgy. At the following two rounds, he was one second faster on average. That may not sound like a lot but at the end of fifteen laps, it seems like an eternity. At Oakland, Savatgy was on the same pace and it showed. Moving on to Glendale, he dropped back to that one-second lull and that left him in third place at the end of the race. This weekend, though, Savatgy was able to get back onto the same pace as Webb. Coupled with a holeshot, he forced Webb into a mistake and earned his second win of the season. He never faltered under Webb’s advances and showed that he is not lacking the mental fortitude it takes to win at this level.

San Diego 2 was a breakout ride for Savatgy and sent a resonating shot across Cooper Webb’s bow. Whatever mental edge that Webb had a few short weeks ago seems to be erased. Leaving Anaheim 2, everyone with an objective take had Webb penciled in for another title. A few weeks later, I don’t think anything can be assumed. Savatgy has proven he is a worthy holder of the red plate and Webb may be a bit frustrated with his own mistakes. Yes, it has to be mentioned that Webb’s mechanical DNF put him in a points position that he didn’t deserve, but racing encompasses both man and machine. It wasn’t Webb’s fault that he lost 24 points in Oakland but now he has to overcome that adversity.

It is truly anyone’s championship at this point and after this weekend’s race in Arlington, they will have a couple of months before they reconvene to settle this once and for all. This weekend will be hugely important for both riders to leave with the momentum. Savatgy made a statement in San Diego and will be the lone carrier of the red plate into the Lone Star State. Cooper Webb has to be less than pleased with the last few weekends’ events and will be out to reestablish his position in a series he was once dominating. Plus, Arlington will be the last time these two square off until April. With such a long break, doubts and worry can fester just as confidence and momentum can swell. This Saturday may indeed tell the tale for how this championship unfolds. If Savatgy can find a way to once again best Webb, he may rewrite the story on a championship that many had prematurely handed to the defending champ.