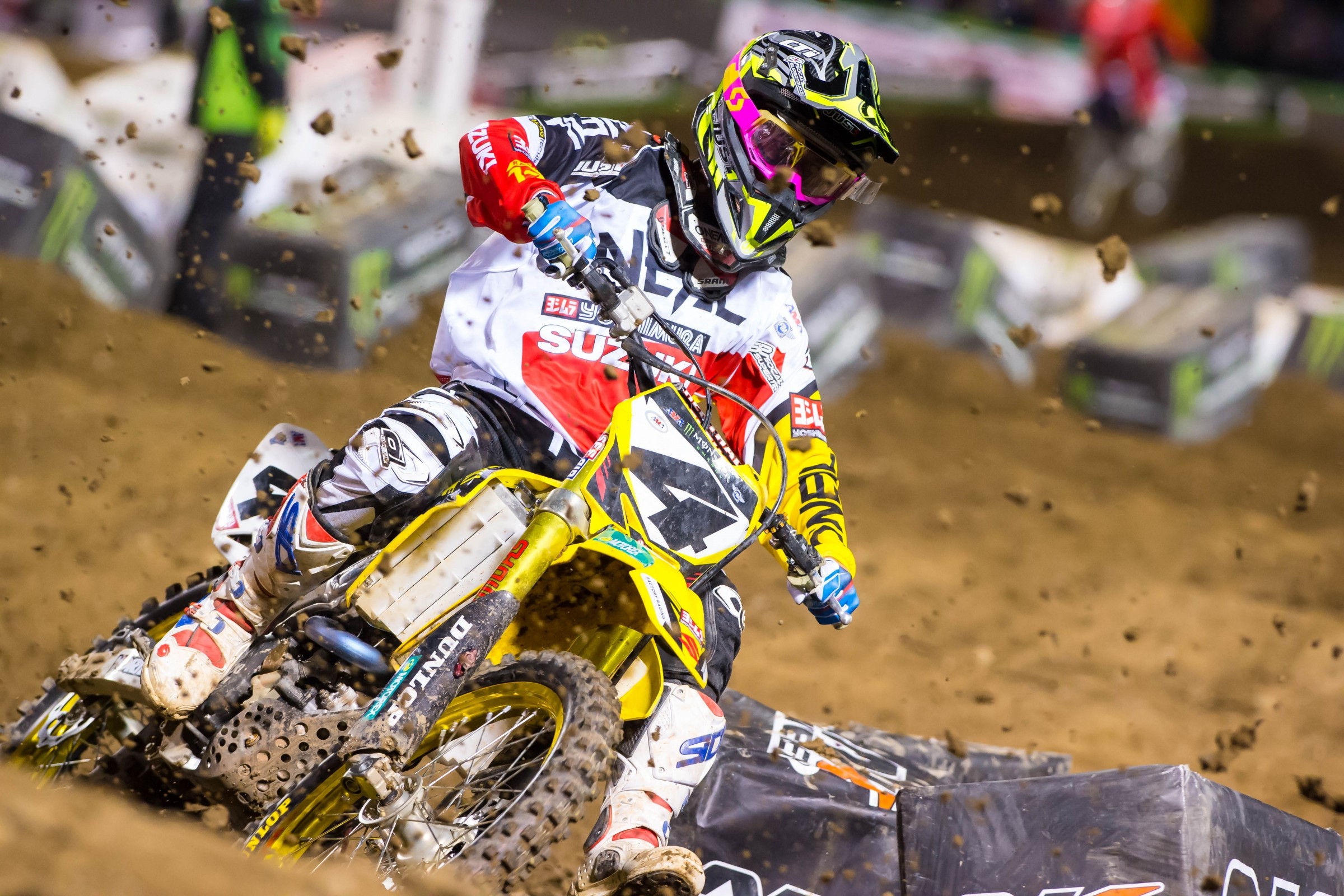 Blake Baggett – Shoulder
Comment: Baggett broke his collarbone, ribs, and scapula during the pre-season. He came back in Oakland but landed on his shoulder when he crashed in his heat race. He soldiered through the main, but his shoulder was deeply bruised. He didn’t re-break anything, but he sat Glendale out as a precaution. The plan is for Baggett to race in San Diego.

Justin Barcia – Thumb
Comment: Barcia is out after undergoing surgery to repair a thumb injured in a pre-season mountain bike crash. He may not be back for the rest of Monster Energy Supercross.

Justin Bogle - Foot
Comment: Bogle has been recovering from a broken foot suffered in December, but will make his return to racing in San Diego.

Trey Canard – Groin and Hand
Comment: Canard pulled his groin before the season started and suffered a nasty cut to his hand at Anaheim 2. He tried to make a go of it in Oakland, stitches still in place, but his hand swelled badly and he didn’t have enough strength to race the night show. He missed Glendale too, and although a final decision hasn’t been made, he could line up on Saturday night.

Kyle Chisholm – Shoulder, Concussion, and Humerus
Comment: Chisholm ended up with a dislocated shoulder, broken humerus, concussion, stitches, and big time soreness after endoing into the face of a triple and getting run over at San Diego 1. He underwent surgery for the shoulder (the humerus was a clean break and didn’t require surgery) and hopes to return before the end of the season.

Adam Enticknap – Femur
Comment: Enticknap broke his femur earlier in the week while practicing at Lake Elsinore. He’s had surgery and is out for the rest of Monster Energy Supercross but still plans on being involved in racing and making appearances at specific races. For more info, check out his Instagram: @the722.

Tyler Enticknap - Thumb
Comment: Enticknap went down in San Diego during practice and broke his thumb. He’s looking good to come back after Daytona.

Vann Martin – Collarbone
Comment: Martin went down in the whoops in Anaheim and broke his collarbone. He’s working on getting ready for the East Coast rounds.

Andrew Short – Shoulder
Comment: Short had surgery on a shoulder he injured before the season and his recovery went incredibly well. He’ll be back racing in San Diego.

James Stewart – Concussion
Comment: Stewart was knocked out when he and Ryan Dungey collided at Anaheim 1. He came back in Oakland, but pulled off in the main due to blurry vision. Stewart says he’ll return to racing when he’s ready, but as of now, we aren’t quite sure when that will be. We heard from the team that James was told to take two weeks off, which he has now done. He will attempt to do some riding next week, and if he feel okay, might give next Saturday's race in Dallas a shot.

Tevin Tapia – Wrist
Comment: Tapia cased a jump and broke his scaphoid in the preseason. He hopes to be ready to race when supercross heads east.

Broc Tickle – Wrist
Comment: Tickle fractured his distal radius in his right forearm several weeks ago. An exact return date is unknown at this point.

Dean Wilson – Knee
Comment: Wilson crashed tore his ACL and meniscus, and sprained his MCL. He’s out for the supercross season.

Daniel Baker – Ankle
Comment: Baker crashed during practice in San Diego 1. He had surgery to repair some torn ligaments and is out for the supercross season.

Zach Bell – Collarbone
Comment: Zach Bell suffered a broken collarbone and will have surgery. The timetable for his return is unknown at this point.

Matt Bisceglia – Collarbone
Comment: Bisceglia had some bad luck when his countershaft sprocket came apart and sent him over the bars. After surgery he hopes to be ready for Atlanta.

Adam Cianciarulo – Wrist
Comment: Cianciarulo went down last week and broke his wrist. He was set to contest the 250SX East Region, but this injury will put him off the bike for at least six weeks.

Luke Clout – Femur
Comment: Clout went down hard during qualifying in Oakland and broke his femur. He’s out for the rest of Monster Energy Supercross.

Nick Gaines – Femur
Comment: Gaines fractured his femur at Pala Raceway in California while getting ready for 250SX East Region. He had surgery to have a rod and two pins inserted and hopes to be ready for Lucas Oil Pro Motocross.

Mitchell Harrison – Banged Up
Comment: Harrison suffered a hit to the head, but a source told Racer X that Harrison passed the concussion protocol. Unfortunately it was a day late and he wasn’t cleared to race Oakland. He had another big crash in Glendale that left him feeling dinged up, but we’ve been told he’ll be ready to go for the weekend.

Jessy Nelson – Banged Up
Comment: Nelson crashed hard before San Diego and was taken to the hospital. He hasn’t raced since and won’t return until after Dallas.

Zach Osborne – General Soreness
Comment: Osborne had a big crash in Glendale. He’s pretty sore, but should line up in San Diego.

Josh Osby – Ribs and Lung
Comment: Osby went down while practicing supercross at Lake Elsinore, suffering a punctured lung and three broken ribs. He was taken to the hospital for supervision, and while there is no specific timetable on his return, Motorcycle Superstore Suzuki says, “It should not take long before he is back on his RMZ 250F in Monster Energy Supercross.”

Mark Worth – Hip and Elbow
Comment: Worth crashed hard during practice in Anaheim and dislocated and fractured his elbow and dislocated his hip. He’s out for San Diego.