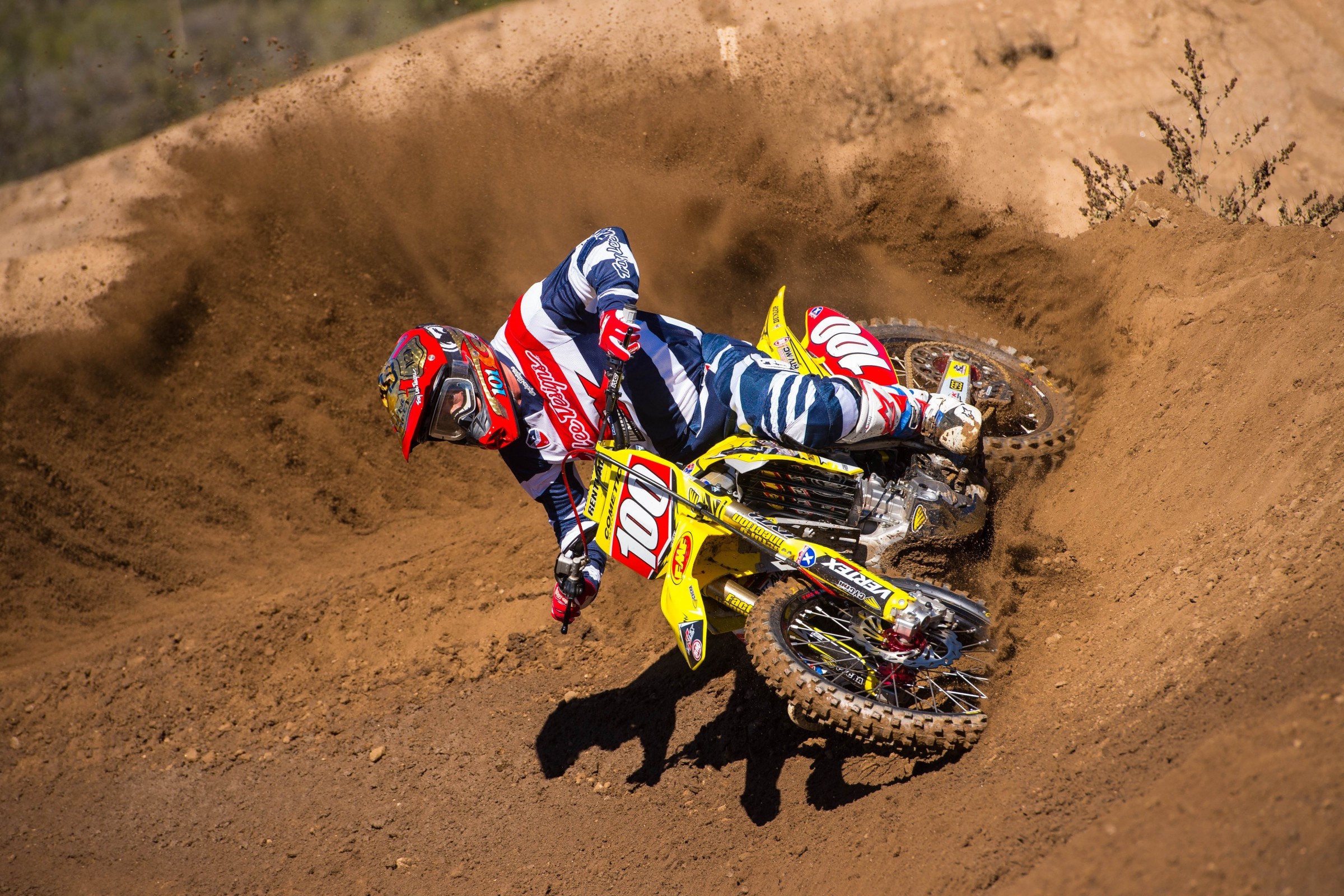 My question is about what happens at the starting gates. I see it at every start, regardless of heat, LCQ or main, most of the guys rev the bike constantly. A bike that you have thousands of dollars into engine work won't idle at the gate? Even when the rider is adjusting his goggles or helmet, the crew will stand there and run the throttle until such time that they can take back the grip. Please help us understand this seemingly ostentatious habit.

You know, I’ve thought the exact same thing and unless I’m missing something there isn’t a good reason for this. It would make sense if the engine were cold before they went to the line and they were trying to ensure the internal engine components were up to operating temperature before the gate drop. But I know any good mechanic starts the bike and gets it warm before they even head down the tunnel. Plus, there is a parade lap prior to the main so it would warm up plenty during that time. There doesn’t seem to be a really legit reason to be tugging on the throttle like a chimpanzee in a zoo discovering his genitals for the first time.

The most likely explanation is that this is a habit/tradition brought over by the two-stroke generation, when mechanics had to work the throttle to keep the bike from dying and to keep it cleaned out. Honestly, these guys today could fire the bike up and let it idle right up until the 30-second card goes up. A couple snaps of the throttle before they click it in gear and it’s all good. You also have to consider that the mechanics are totally jacked on adrenaline too and twisting the throttle keeps them from pulling their hair out during the longest 30 seconds of their life. Let’s try not to let it bother us.

You may have answered this question before, but I thought I would ask it anyway.  During your time as a pro rider or team manager, have any of the top riders on the circuit smoked cigarettes? What got me thinking about this was a comment made by Steve Smith Sr. of the Baltimore Ravens on ESPN radio the other day. He stated that during his career, there were a few players that actually smoked cigarettes during half time!

Before today I would have said, unequivocally, no to this question. Motocross demands an incredible amount from your cardiovascular system and choking it up with a bunch of smoke is the most ignorant thing I’ve ever heard of. But after a quick Google search these photos have me questioning my theories.

I literally typed “motocross racers smoking cigarettes” and those two images popped up. I expected to see some old-timey black and white photos of Moiseev, Wolsink and DeCoster puffing Winchesters in the paddock at Namur. Instead, I see a couple of our sport’s current heroes! All this time I thought hard work and commitment to training, diet and health were a key part of any successful program but maybe I had it wrong. Maybe the answer is inhaling carcinogens on a regular basis? I wonder if a little more research would turn up photos of Carmichael sitting around his house with a hooka? Or maybe I’d see Ken Roczen smoking a vape pen or, as I’ve referred to them up until now, a douche flute. I mean, are people serious with those things? If you like that much smoke just do us all a favor and light yourself on fire.

I’ll have to do some more research, Mark.

First of all, I generally love your column as we appear to hate the same things in this world and it is quite refreshing.

My question is about amateur support teams and riders. In lower levels of car racing, the kids with the best equipment and support usually come from privileged backgrounds. Many who then reach the pinnacle, let's say Formula 1 (such as Pastor Maldonado), have had the money to get them on the best teams to showcase their talents (or money) in the lower categories.

Is this the same case with the kids we see at Loretta's every summer on Team Green Kawasaki or GEICO Honda? Would Austin Forkner's parents pay for his younger team green days or did Kawasaki finance him from the time he was on a 65? There is no doubt he is an exceptional talent and I am just trying to think of other kids who maybe have the support but don't necessarily make the grade.

Thanks for any of your knowledge on the subject.
Cody

Ahhh, hatred…bringing people together since the beginning of time. One of the things I love about this sport is the fact that there are very few limiting factors. You don’t have to be six feet tall or be able to lift a car over your head or be rich to be successful as a dirt bike racer. Ricky Carmichael, James Stewart, Ezra Lusk, Jeremy McGrath… you know what they all have in common? Aside from being legends in the sport, they all came from very modest, blue-collar families. In fact, that may have been part of what drove them to be great.

That said, times they are a changing. When Ricky and James were on their way through the ranks they did get some support from their sponsors, but it was just enough to keep them racing and making it to all the amateur nationals. These days, kids who are chosen to be the “next big thing” are groomed and catered to from a young age. Some teams are locking kids up before they even get off mini bikes. Also, the cost of bikes is changing the demographic slightly. Back when I was racing you could still pick up a used 125 for a couple grand and with $250 have it running like new. That was your starter bike and after a season or two you could upgrade to something better for four or five thousand. You might still be able to find an old 125 but it’s tough to compete on one of those in a 250 class. The next five to ten years will be very interesting in terms of what direction the manufacturers go to re-engage the grassroots of the sport.

Motocross is not polo or formula one. You can’t buy your son a ride on a factory team [That’s a lie… everything is for sale for the right price] and we don’t drink tea with our pinkies out. We drink Red Bull and wear skateboarding shoes and we fart big when we walk through the first class cabin on an airplane. Wait, that last one might just be me. It’s our down-to-earth, working man roots that make our sport so real. Now, who’s going to join me in leaving a little stank on those well-to-do folks in the uppity cabin?