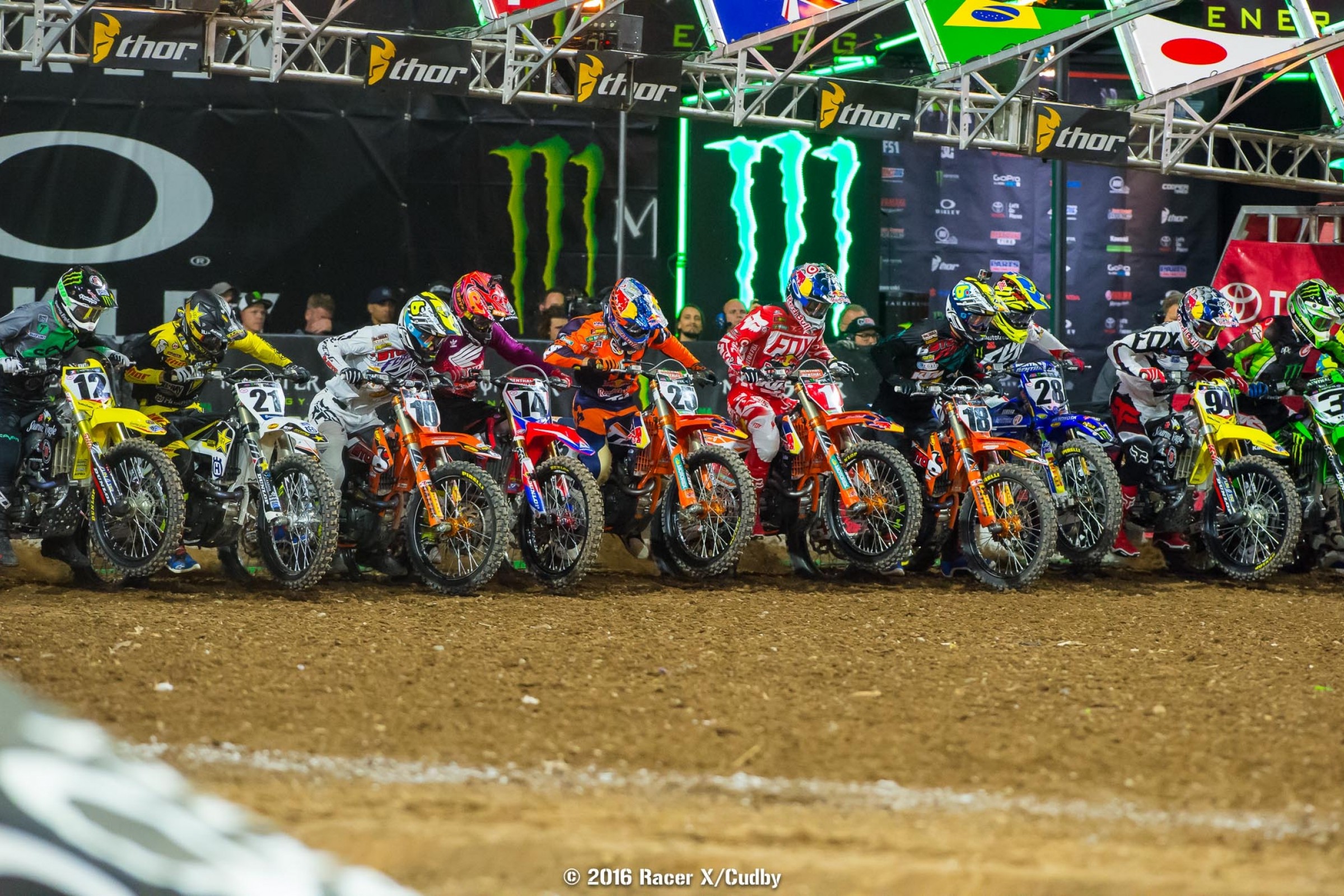 Monster Energy Supercross moved from its usual stop at Chase Field in downtown Phoenix, Arizona, to University of Phoenix Stadium in Glendale. It could have moved in another direction, though, because the nearby city of Surprise, Arizona would have mate a fitting stop. This was the first race this year where neither  Ryan Dungey nor Cooper Webb won on the same night, breathing life and confidence into two riders who have been chasing them hard as of late: Ken Roczen in the 450SX class, and Christian Craig in 250SX.

Not like Dungey and Webb weren’t fast, and in fact they reeled in some time on their rivals during their main events. It wasn’t enough, though. In the case of the 450s, Red Bull KTM’s Dungey got his first dud of a start this year, coming out of the first few turns in 11th. Soaring Eagle/Jimmy John RCH Suzuki’s Roczen, meanwhile, finally snapped his start slump by coming out in second, and then made short work of BTOSports.com KTMs’ Davi Millsaps to get the lead. It’s the first time Roczen has led in a main event all year, and he knew what to do with it. He might not have been the flat-out fastest the whole way, as Monster Energy Kawasaki’s Eli Tomac got to second early and put a run on him, and then Dungey later took that spot away and closed on Roczen a bit, but it didn’t matter. Roczen put together the cleanest overall race between his good start, strong early laps, and strength all the way to the end, more than enough to notch his first SX win since January of last year. Dungey eventually got to second and did close up some time, and Roczen was aware of it. After the race, Roczen said he rode most of the track well but was too conservative through the very difficult whoops. He knew Dungey made some ground on him, so he and his team will continue to put in the work to try to close that speed gap.

Dungey’s three-race win streak is over, but he’s now finished no worse than second in a supercross for a full calendar year, and now has 21-straight podiums (Chad Reed holds the all-time mark with 25 straight). His ride was probably as impressive as any other this year even though he didn’t get the win.

Long time coming for Tomac to get his first podium of the season, via third, but for awhile it looked like it could be more. Eli tucked into the inside in turn one nicely to scratch out a good start, got around Millsaps to get into second, and then made a brief run on Kenny. Tomac told us at one point the race reminded him of last year’s Phoenix race, where he caught and passed Kenny for the win, but in the second half of the race Eli wasn’t as strong, and that allowed Roczen to get away and Dungey to take second. After the race, Eli was happy to have finally podiumed, saying huge bike changes this week really paid off. However, he couldn’t put up much of a fight when Dungey got to him, and admitted he’s got to find eight more laps or so. Considering Tomac started the year late after recovering from double shoulder surgeries, that’s understandable.

Good ride from Rockstar Energy Husqvarna’s Jason Anderson for fourth, but, again, he was done in by a poor start. Same story every week! Anderson did feel this start was at least somewhat better than his last few, but he was disappointed he couldn’t quite hang with Dungey as they came through the pack. The hardpacked, slick Phoenix track required patience, and Anderson thinks he tried a little too hard to hang with Dungey, got on the gas too early, spun too much, and lost time.

Another solid night for Millsaps, who has been good in his revival with BTOSports.com KTM. He won his heat race and led briefly in the main, then held on for a solid fifth, his season best.

Ah, the 250s. The Christian Craig versus Cooper Webb battle has been raging for three weeks now, and this time, for the first time in a main event, GEICO Honda’s Craig got the upper hand. As had been the case for several of these races, Craig got a great start, just edged out by his teammate Jimmy Decotis for the holeshot, and took the lead. Webb’s start was poor (can we say “as usual” here?) but he made amazing moves on the first lap to get to fourth, then third, and then second. Webb ate into Craig’s gap, he was quicker in most places, but Craig did have him covered in the whoops. Webb kept closing and tried making a move, and they came together over a jump. Craig wanted it to be known that he only tagged Webb because he was trying to get to his preferred whoop line on the right side, and that’s the line Webb was aiming for as well. The next lap, Webb tried to dive even deeper inside and lost his front end. That was it—Webb was out of time to make one more charge.

Craig’s win was an emotional one. The man retired from racing at the end of 2013 before mounting a full-scale comeback last summer. “Preperation,” said Craig when we asked what the difference is between him now and his previous incarnation.

Make no mistake, Webb is still the fastest man in the class, but now, due to a mechanical failure last week and a washout this week, has lost two in a row. The good news is he finished in front of title rival Joey Savatgy. The Monster Energy/Pro Circuit Kawasaki rider struggled at times during the day and night, and when Webb fell trying to get Craig, Savatgy was unable to take advantage. He explained on the podium after the race that he was struggling with an illness. He and Webb are now tied for the points lead.

In the 450s, oh wow did a battle rage behind the Roczen/Dungey/Tomac trio. Anderson, Millsaps, Chad Reed, Marvin Musquin, Justin Brayton and Cole Seely all went at it. Seely was there at one point, actually in fourth, before he stalled his Honda and went to the back of the train. Reed was there but didn’t seem to have the same magic on this night as he’s had in others, and was passed by Musquin and nearly by Brayton. Then Chad kicked his veteran experience into action, cleaning everything up in the second half of the race, repassing Musquin and pulling away from Brayton. That left Millsaps fifth, Reed sixth and Brayton seventh.

Musquin, who podiumed last week, told us the whoops got the better of him this time, and he started making mistakes in them and going backwards. Brayton was happy with his ride and felt it was his best of the year, but was amazed that Reed, who he seemed so capable of passing, kicked it into another gear late and got away.

Seely was eighth after stalling, but he did catch Musquin, and when he passed him his front wheel tagged Musquin’s rear and put him down. Musquin recovered for ninth and Wil Hahn took his season’s best with tenth.

This stadium was a nice upgrade over Chase Field, which is saying a lot because that stadium is cool, too. The most unique part was a track that actually went outside the stadium, adding a lot to the lap times—no one ran one under a minute. It also opened up a jumbo-length start, which took riders into fourth gear. Tomac told us he thinks he went faster down the start straight than he even does in any section of Lucas Oil Pro Motocross.