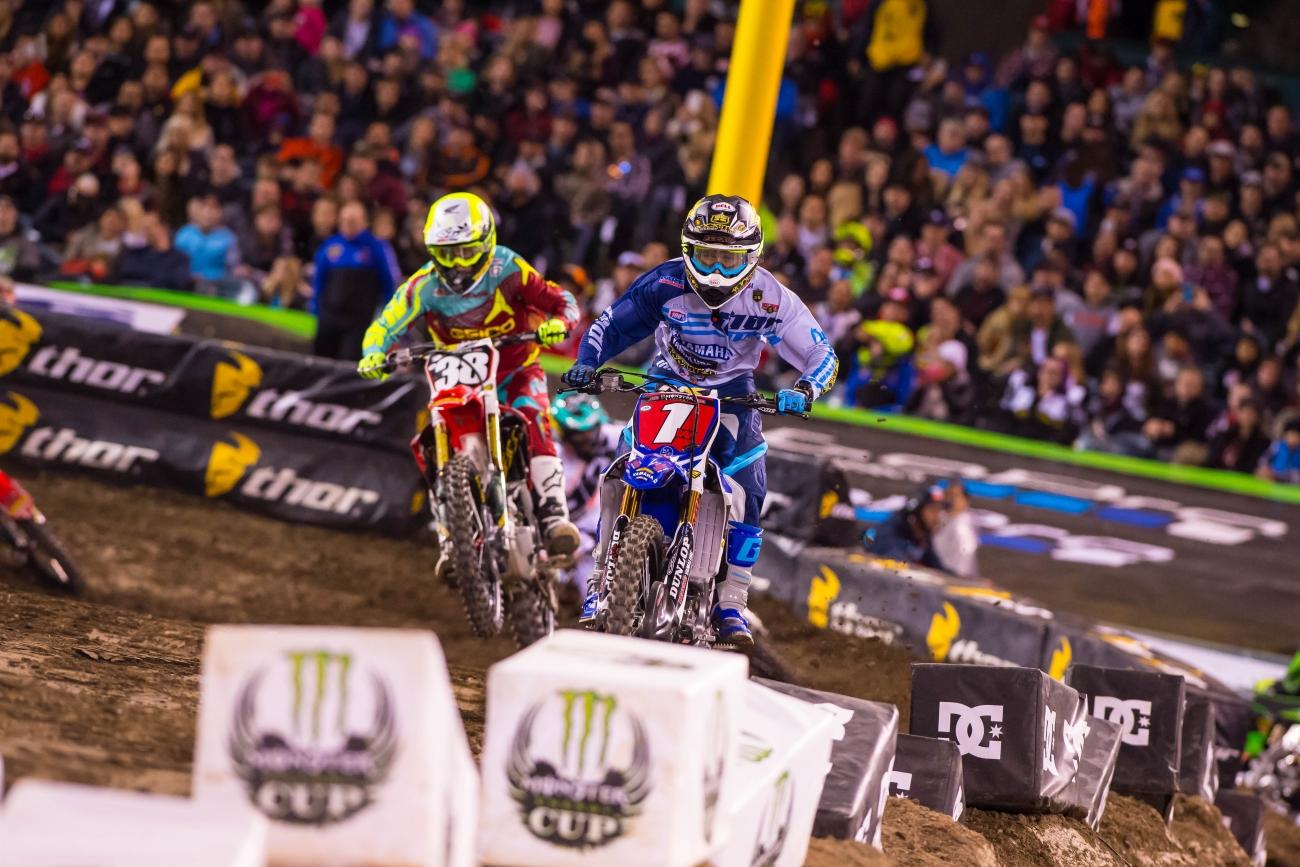 Breakdown Wise Beyond his Years

Cooper Webb impressed me this weekend. I know, I know… Not a shocking revelation. For all of the great things that Cooper is doing on his motorcycle, it wasn’t his corner speed or scrubbing a triple that gave me pause. He is taking great strides in his mental game, and for a rider still so young, his approach is becoming very cerebral.

Practice was a frustrating affair, with multiple run-ins through traffic. In his heat race, he simply couldn’t match Christian Craig in the tougher whoops section. The heat race was the first time I saw anyone simply beat Webb straight up this year, and I knew that didn’t sit well with the outspoken defending champion.

In the main event, Cooper rounded the first lap in fifth place. Not a terrible starting position, but his fiercest rivals were positioned in front of him. He hadn’t had the greatest of days thus far, so I was curious to see how it panned out. And did I mention that Christian Craig had jumped into the lead? It was an interesting scenario for him to have to work to the front. Webb didn’t panic, though, and slowly moved past Zach Osborne and eventually by a downed Joey Savatgy and into second place, setting his sights on GEICO Honda’s Craig. After such a spirited chase in the heat race, Webb had to be a bit worried about Craig once again fending him off. As he slowly crept up on Craig’s rear wheel, I wondered where and how he would make the pass stick. In the heat race, the taller, lankier Craig simply had Cooper’s number in the whoops. He could consistently put time on him there, and it put pressure on Webb to close the gap on the rest of the track. Essentially, Craig just had to keep Cooper at bay until he could get that advantage back, or so he thought.

As the whoops began to deteriorate, and possibly in part due to lost intensity with fatigue, Craig lost that advantage. This let Cooper apply a copious amount of pressure to Craig, virtually riding on his rear wheel all the way around the track. Every time he tried to make a pass, though, Craig answered. He would cut back underneath him if Cooper went for the block pass. He would ride him high into the berm if Cooper tried to slingshot around the outside. Christian had foregone the idea of racing forward and now was simply trying to counter Cooper’s every move. And, for a while, it was working! Lap after lap, they were locked in a high speed chess match, sizing each other up. Meanwhile, Zach Osborne crept up closer and closer to the lead action, like a cat ready to pounce on its prey.

This whole dynamic is the real subject matter for the article, and is what I found so impressive. Many riders, faced with Craig’s counter moves and slowing of the race, would lose their temper and make an aggressive, risky pass. Cooper, not the shyest of racers, surely had to be fighting back the urge to send the #38 machine into another dimension. After all, he hadn’t been overly aggressive and Craig had toyed with him more than once. Furthermore, their back-and-forth had allowed Osborne back into the fight. As this was playing out, I fully expected Webb to go for the jugular. He had to be frustrated, ready to make the pass stick, and bee-line it for the checkers, right?

To his credit, he didn’t panic. He remained calm, patient, and methodical. He finally found a way around Craig, and without making contact. He was able to fend off the Osborne uprising and immediately began extending his lead. It was a picture perfect example of how to remain above the fray. He didn’t let anger cloud his judgment and lead to a mistake. He had every reason to get into a situation that could have left him on the ground or worse, and he chose not to.

The things I have witnessed from Webb over the last year or two span a wide spectrum. His riding is some of the most brilliant I have ever seen, but I have also seen some immaturity in his interviews, and in the extracurricular activities during practice and racing. The tact and patience he showed last weekend, though, was particularly impressive. Being so young, I often expect him to fall into the traps that many young riders do. Last weekend’s main event was a great opportunity for him to do so. Instead, he played it like a veteran who has seen this song and dance many times before. His skill on the bike is undeniable and will propel him to more victories, but his thought processes and headiness will be the difference between a flash in the pan and a champion for years to come.