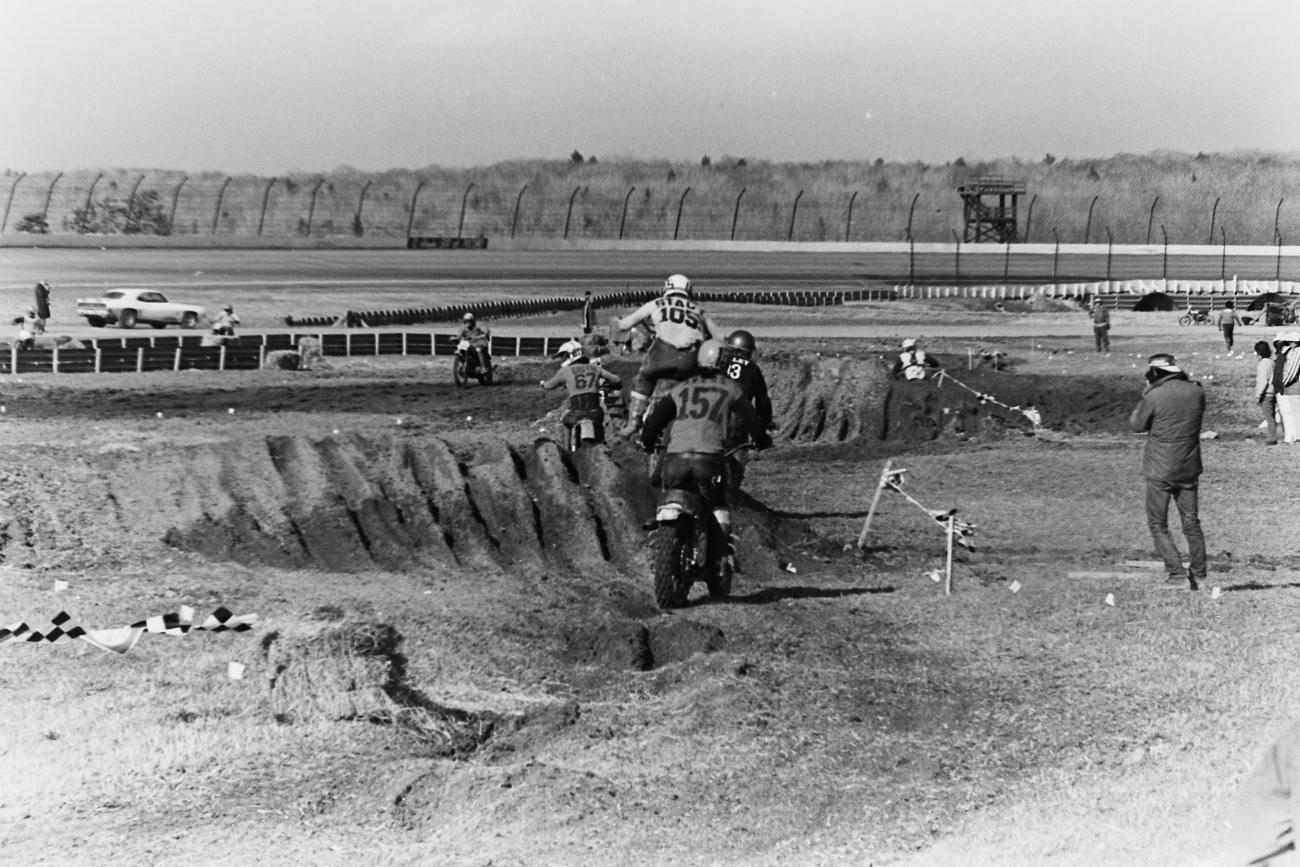 The press announcement earlier this week in North Carolina meant that pro racing—in the form of the FIM World Championship—is returning to Charlotte Motor Speedway for the first time since 1996-’98, when what is now called Monster Energy AMA Supercross held an annual round on the infield of the big car track. But this time it’s not a round of supercross, though it is being held at night, under the lights, on a manmade track. And it’s not in the actual Charlotte Motor Speedway, but rather next door at the zMax Dragway, which offers all the amenities of the stadiums that currently host supercross. Both promoter Youthstream and the zMax owners stated that this is basically the future of motocross, a new step toward bringing motocross “downtown” and to better facilities—think NASCAR and stadiums style—that will hopefully attract more new fans and sponsors.

That sounds quite similar to what Michael Goodwin said when he came up with the idea of the Superbowl of Motocross at the Los Angeles Coliseum in 1972—effectively the birth of AMA Supercross as we know it today. It’s also what a lot of other promoters have said when they tried this same concept, some to great success, others to much less. So for this week’s Bench Racing Ammo, we decided to take a trip through the history of auto-racing facilities and other non-traditional venues hosting supercross-style and motocross event. Let us know if we missed any in the comments.

Let's start in the beginning, the Great Victory Day race in Prague, Czechoslovakia, on a manmade motocross course at the city's soccer stadium in the fifties. This was a supercross before Americans even knew what a motocross race was! That one predates not only Goodwin’s idea but just about every other professional supercross and motocross concept.

In 1971 the first Daytona MX race took place, actually on the other side of Daytona International Speedway where it is now. In 1972 it moved to where it has resided ever since, and in 1974 it went from being an outdoor national (as it counted in 1973) to the opening round of the Yamaha Super Series of Stadium Motocross, now known as Monster Energy AMA Supercross.

(Rare shots from the 1971 Daytona Motocross race, which was part of the Florida Winter-AMA Series. Photos by Wally Wallenberg.)

The first Daytona race was actually part of Bill West's Florida Winter-AMA Series, which was once the biggest U.S. domestic championship. Gunnar Lindstrom, father of longtime pro mechanic Lars, won the 250 Class on a Husqvarna, while Ohio's Bryan Kenney won the 500 Class, also on a Husqvarna.

(Check out some of Wally Wallenberg’s rare chrome slides from Road Atlanta 1971.)

Believe it or not, the very first official AMA National Motocross race was held on the infield of Road Atlanta, the world-renowned road racing facility in Georgia. The race marked the beginning of the first stand-alone series for the purpose of determining the AMA Motocross Champions, and the races were won by a pair of CZ riders, Sonny DeFeo(250) and Barry Higgins (500). To this day Barry, an AMA Motorcycle Hall of Famer, still works in the industry with KTM.

Road Atlanta actually held a race in 1971 first. It was called a Spring-AMA Series race and was held on the hillside by the road course's starting line. The winners were Barry Higgins in the 500 Class and Athens, Georgia's Barry Blalock in the 250 Class.

After the successes of Daytona and Road Atlanta, the next big tracks to host motocross races were Pocono International Speedway in Pennsylvania and then Talladega in Alabama. The Pocono track was similar to Daytona in that it was built by Gary Bailey, but the soil was much harder-pack than the then-all-sand Daytona. They held a Pro-Am regional race there, as well as a round of the 1973 AMA 250/500 National MX Championships. The winners were the late Rich Thorwaldson (250) and his Suzuki teammate Mike Runyard (500).

Talladega's Alabama International Speedway held a race on its infield, using the paddock and garage for the motocrossers as part of a 1974 Motorcycle Week, but it was scheduled on top of the last round of the AMA Motocross Championship that year in New Orleans. So they held a women's race on the infield of the speedway, and the winner was Crystal Champion, who rode a 100cc Yamaha.

Talladega tried again ten years later with a round of the 1984 AMA Supercross Championship, with the race won by Team Kawasaki's Jeff Ward. It was the one and only AMA Supercross race ever held in Alabama. No women's class this time, nor was there a 125 class—that was still a year away in AMA Supercross.

In 1973 promoter Mike Goodwin took his idea of "stadium motocross" to Philadelphia's old John F. Kennedy Stadium. The race took place in the fall and was part of the Trans-AMA Series. Dutch Maico rider Gerrit Wolsink won it. Racing would return to the same building in 1980, only this time it was in August and part of the AMA Supercross Championship—a doubleheader, even. The winners were Yamaha riders Mike Bell and Broc Glover.

There was the old Great Bear Grand Prix at Riverside Raceway in California, which was more of an off-road race but often drew top motocrossers out to have fun.

And Road Atlanta also hosted some Trans-AMA races, including in 1974, when Roger DeCoster won the 500 Class and Marty Smith took the 250cc Support Class.

In the summer of 1976 an ambitious A-class racer from Illinois named Joe Kennedy, whose father owned a large construction company, decided to build a track inside the Waukegan Speedway stock car track and promote a Friday-night series. Joe and his brothers knew how to work the dozers and he built the track and offered a $100 first place for 125, 250, and Open Pro classes. Word spread quickly and the series drew not only the top racers from the area like Mark Barnett, Jeff Surwall, and H-D factory rider Eric Skrudland but out-of-towners like Glen "Tex" Johnson and Team Sambo's rider Jack Keese trying to pick up extra cash between Nationals. The track also featured the first "double jump" in the ILL-IND-WIS area.

The auto-moto idea is not new in Europe either. There have been at least four Motocross des Nations races held at auto racing facilities in the past twenty years. In 1996, Team USA's Jeremy McGrath, Jeff Emig, and Steve Lamson dominated on the infield of Circuito des Jerez in southwest Spain. In 2003 the race was held at the Zolder Circuit Terlaemen in Belgium, where Ricky Carmichael won outright in the one-moto main (though the Stefan Everts-led home team took the Peter Chamberlain Cup). In 2008, Team USA's James Stewart, Ryan Villopoto, and Tim Ferry—all on Kawasakis—won again at the purpose-built Donington Park infield track in England. And then one year later in Italy, Team USA—Ryan Dungey, Jake Weimer, and Ivan Tedesco—won again, this time at the Autodromo di Franciacorta in Brescia.

For several years now the FIM World Championship has opened under the lights in Qatar, another track built on the infield of the Losail International Circuit. The event gets few spectators, but it is certainly in a unique setting. Last year it was watched closely online, as it was the first MXGP race of Ryan Villopoto’s ill-fated season abroad. He did not do well, but he had another shot a week later on another racecar facility, this time Nakhonchaisri in Thailand. Villopoto claimed his one and only Grand Prix win there. Two races later, he crashed at the more traditional Arco di Trento circuit in Italy and injured his back, ending his season and ultimately his career.

Two years ago, the EuroSpeedway Lausitz in Germany hosted MXGP, similar to the one that starts the series in Qatar, only this one was not at night and actually had a few thousand spectators. The track was well-received in the paddock, but a very hot weekend probably affected the turnout. Germany will get another supercross-style race in October with something called the Manufacturers Cup, which will be held under the lights inside a soccer stadium, on the same day as Red Bull Straight Rhythm and one week before the Monster Energy Cup in Las Vegas.

Probably the most successful go at having MXGP in an auto-racing setting was last year’s Assen race, where the organizers built a sandy racetrack on the infield of the renowned Dutch facility. A beautiful August weekend brought out a sizeable crowd, and while the concept was panned before the race, its success has pretty much led to a move for MXGP toward this kind of facility and supercross-like setup.

Which leads us to Charlotte Motor Speedway. Many thought at first that the race would be held inside the actual NASCAR circuit, Daytona-style (and Charlotte Supercross-style), but it is instead at the smaller drag strip next door. The animated Charlotte track map looks pretty much exactly like a Monster Energy AMA Supercross track, right down to the black banners and green arrows—just fewer rhythm jumps and no sharp whoops. The soil will probably be some very good and red Carolina clay.

The concept of building an SX-style track on top of a drag strip dates back to 2000, when what was called the AMA/EA Sports Supercross Series visited Route 66 Speedway at Joliet, Illinois, just below Chicago. At the time, the ChicagoLand NASCAR Speedway was still under construction next door, so the setting was pretty much exactly what they have planned for Charlotte in September, only they are calling it Monster Energy MXGP instead of Monster Energy Supercross. Lap times at Route 66 were about ten seconds longer than most AMA Supercross tracks were at the time.

The event in 2000 aired live on ABC network TV but was plagued by cold weather and the foregone conclusion that Jeremy McGrath was going win his seventh championship in eight years. The King came through, but the other star of the show—125cc rookie Travis Pastrana—did not, losing a close race and the #1 plate to Stephane Roncada. Here's what the program looked like.

Of course there were also the last three years of having a round of the Lucas Oil Pro Motocross Championship at Miller Motorsports Park in Tooele, Utah, which MX Sports Pro Racing organized along with MMP. Marc Peters tried to construct the most motocross-authentic track he could on the infield of the auto-racing facility, with some massive dirt-moving to build some hills. The event, which was held during the day, had mixed reviews from both riders and media, especially when it was windy. When the racetrack was sold, the decision was made to move that round back to a more authentic motocross track, not to mention a historic one: The 'Wick in Southwick, Massachusetts, which lacks all of the amenities of a sports stadium but has a superb motocross track. That race will take place on July 9 and will be featured live on NBC.