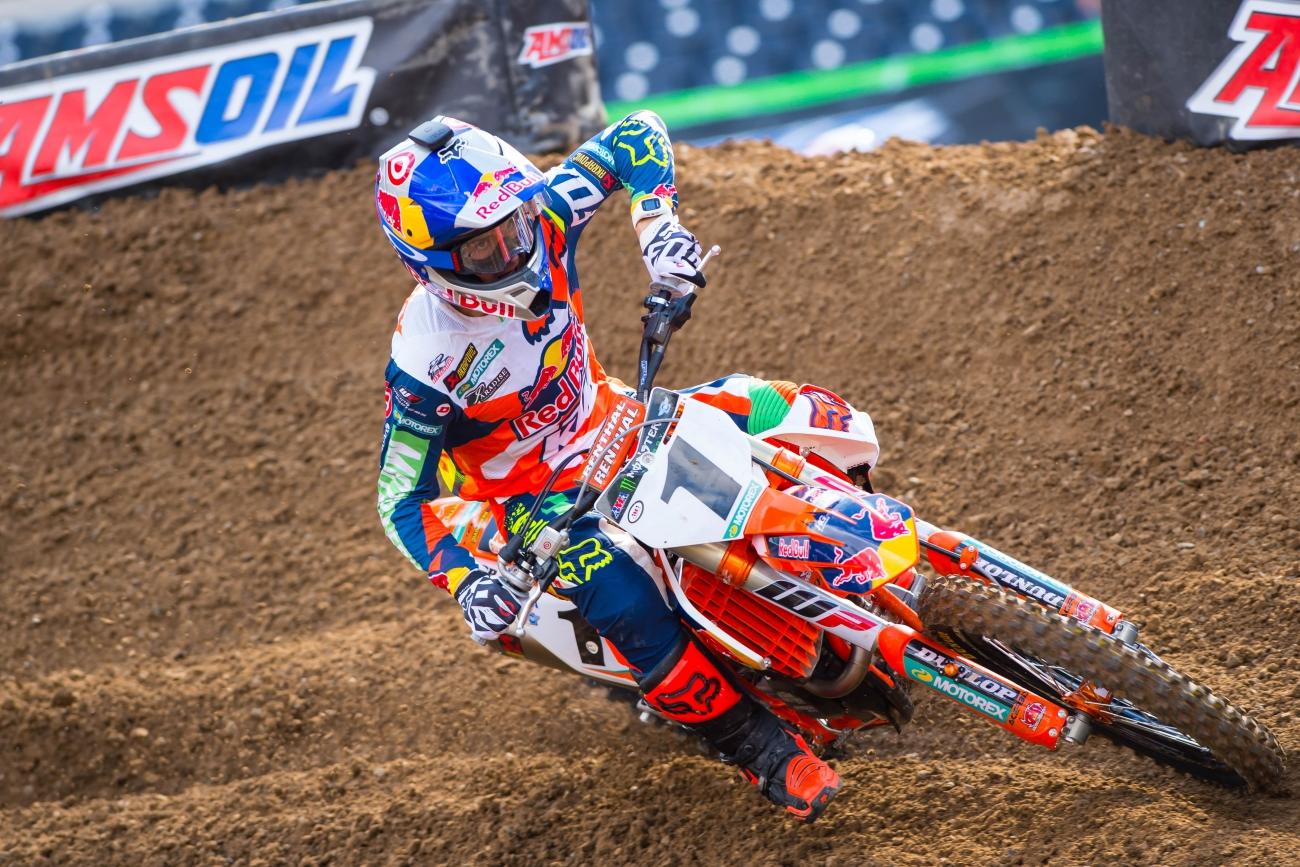 This weekend’s track had many layers to it. No, I don’t mean the plywood and plastic laid over the baseball field, but how it appeared to the average fan versus how it had to be raced. On the outside, it appeared there was ultimate traction and riders could be very aggressive. While this may be true to an extent, it was actually key to gauge that aggression level to lowering both the lap times and chances of a crash.

While watching the races, everyone could see the berms being built up, giving riders a cushion in which to accelerate from and use as a pivot point. While these berms may have been useful at times, as they pushed further and further towards the outside, they also became slower. This is a recurring theme in modern era supercross racing. The four stroke torque has really changed the game for how riders have to approach a track. The old two strokes needed a lot of room to build up momentum and clear obstacles, so berms were crucial for gaining the needed speed to clear jumps. Even if it meant adding 10 feet of distance traveled to reach a berm, it was still worth going outside.

With four strokes, riders now focus on riding the “shortest” possible track. The bikes have so much power and traction that riders don’t need to swing out wide to build speed. This different tactic was very relevant this past Saturday at Petco Park. As the berms began to push out, the distance traveled grew correspondingly. The berms kept moving further away from the inside line, and that added distance to the track without adding any reward in speed, or the chance to clear a bigger obstacle. That all translates into slower lap times.

Racer X’s Aaron Hansel caught up with Ryan Dungey about this topic this week in Monday Conversation: “I think we all had more left in us, but you would have to find the roll speed rather than intensity because the harder you attacked this track the more you would spin and you’d be prone to make a mistake—you’re overriding it at that point,” said Dungey. “I felt him [Reed] there but I just tried to keep things clean and tight. I think we all had a little more in us, but it was just such a fine line. A few corners were a little softer and kept getting pushed so I’d get inside and try to start a new line and just keep that momentum going."

There are a few points in those quotes that could be overlooked, but they are critical to understanding how Dungey went so fast on a track like that. Many times, Ryan is accused of being robotic in his interviews but in this case he really shed light on valuable information. When he speaks about “roll speed rather than intensity,” he is talking about keeping the machine’s natural momentum up versus using hard braking and hard acceleration. The dirt was too loose to avoid wheel spin if a rider where to get too aggressive, but that was hard to resist because all of that traction just begs for more throttle.

There’s also this: “A few corners were a little softer and kept getting pushed so I’d get inside and try to start a new line and just keep that momentum going." He is referring to exactly the point I am making about the inside line. Dungey knows that as the line moves further outside, he is only adding distance to the track. He knows that the four stroke will allow him to ride a tight inside line and still jump anything necessary. But while it’s easy to try to use the inside, it’s hard to use it at max effectiveness. To do it, Dungey relied on one of his greatest strengths: carrying corner speed without relying on applying the clutch or throttle.

As far as other riders are concerned, he simply stays off the brakes! I know that may sound impossible, and, yes, he is actually using the brakes, but he is absolutely making a concerted effort to use them as little as possible. He lets the bike roll (that’s the roll speed he referred to) through the turn and doesn’t upset the suspension or grip that the tire enjoys under zero load. As he carries this speed through the inside line, it lessens his need to accelerate for the next obstacle because he is traveling faster already.

Now, I know this all sounds easy but trust me, it is one of the most difficult techniques to master. Back in 2006, when Roger DeCoster was justifying a surprising hire of a young Dungey, he kept referencing Dungey’s corner speed. Dungey is the master of roll speed through corners, and he wields that power unmercifully on the rest of the field. It allows him to look picture perfect for 20 laps, often times because his engine is turning 1000 RPM less than his competition in the turns. He is not hard on the binders, he is not hard on the throttle, but he is still going fast. The reward is momentum and efficiency. His ability to shorten the race track, maximize the four stroke’s strength and apply his technique effortlessly for 20 laps all equates to the result we all watched last Saturday night.

I have a funny feeling we may see a lot more of it.