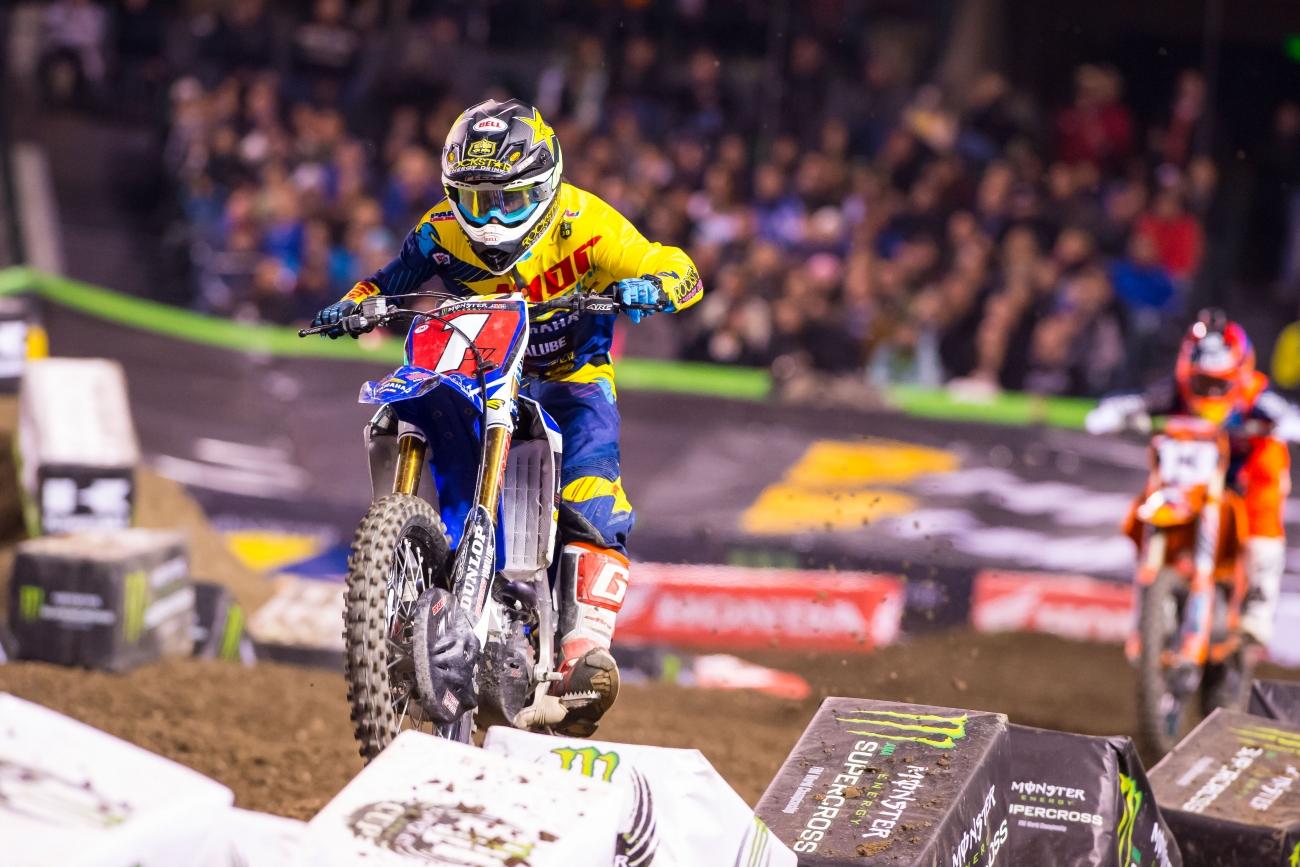 Cooper Webb, of the Yamalube/Star Racing Yamaha team, is in a strange spot now. Winning races is awesome, but for the defending 250SX West Region Champion, who won all but two races a year ago, it’s also expected. So while the headlines from Anaheim can go on forever with 450 stories, Webb’s solid victory in the 250SX class almost went overshadowed. We talked to Webb after the race and found him thinking similar things—even he knows the wins are pretty much expected at this point. It’s up to him to actually deliver.

Racer X: Started the year out right!
Cooper Webb: Yeah, it’s been a long off-season and it’s been fun getting it done here. I kind of struggled here last year so it’s nice to get that monkey off the back. It was nice to come from behind and get the win too, to do it that way. Looking forward to the rest of the season.

Do you feel more pressure to win now than last year?
I don’t think there’s any pressure put on me, but for myself, that’s my standard now. It’s obviously our goal too. We did it last year so obviously it’s possible to do it again. I know everyone kind of expects it. Everyone says it’s harder to win the second than the first, so we’ll just put our heads down and put in work. I think we’ll get going here shortly.

We’ve been hearing some rumors of you riding a 450 on the East Coast.
That’s the first I’ve heard of that. We’ll see where we’re at. Winning the 250SX title and outdoor tile are the goals this year. We’ll take it one race at a time, so ask me in a few weeks.

How was the track?
It was tricky, but the Dirt Wurx guys did an amazing job and it was actually pretty slick and dry. I was glad the rain held off and it was even a little drier than Anaheim normally is, almost like A3. But it’s all good. We didn’t know where we were, and I’ve been riding the 450 a lot lately. I haven’t been doing as much testing on the 250; I was actually supposed to do East [Region] until about a week ago. There was some last minute prep that went on.

Is that hard to change it up like that?
Yeah, it’s tough because I did all those off-season races thinking I was doing East. I knew I had to get ready regardless, so I think we’ll be fine.

So tonight we saw a Cooper Webb that was unprepared?
I don’t want to say that, but there’s definitely room for improvement.

At least you get to run the number one plate!
Yeah, there are pros and cons. With this year being my last year on a 250 I really wanted to ride all the East Coast tracks and learn them for when I race a 450 next year. But it is what it is, and we’ll race out here on the West!

Why the switch?
Injuries. Aaron Plessinger and Jeremy Martin got hurt.

The track was pretty wet earlier. Were there any remnants of that left in the main?
It was night and day. Practice was soft and the transitions were pretty weird. It was good. It was really technical in practice and it really tested the setup. We had to make quite a few changes and we got to test a lot. It was tacky earlier, but the main event was really slick. We got some good information today and I felt really good on the bike.

Jessy Nelson had a pretty good lead for a while, and it seemed like he was holding it stable for a few laps. Was there a moment when you thought you were going to have to settle for second?
No, there was never any of that. You always go for the win. I didn’t want to ride over my head, but I knew what I was capable of and I knew it was going to be around lap ten or twelve. I knew it was going to come late because of the lead he had. He was doing all the rhythms, and I was only catching a few tenths at a time, but I knew if I kept pushing we could get it done. It worked out nicely.