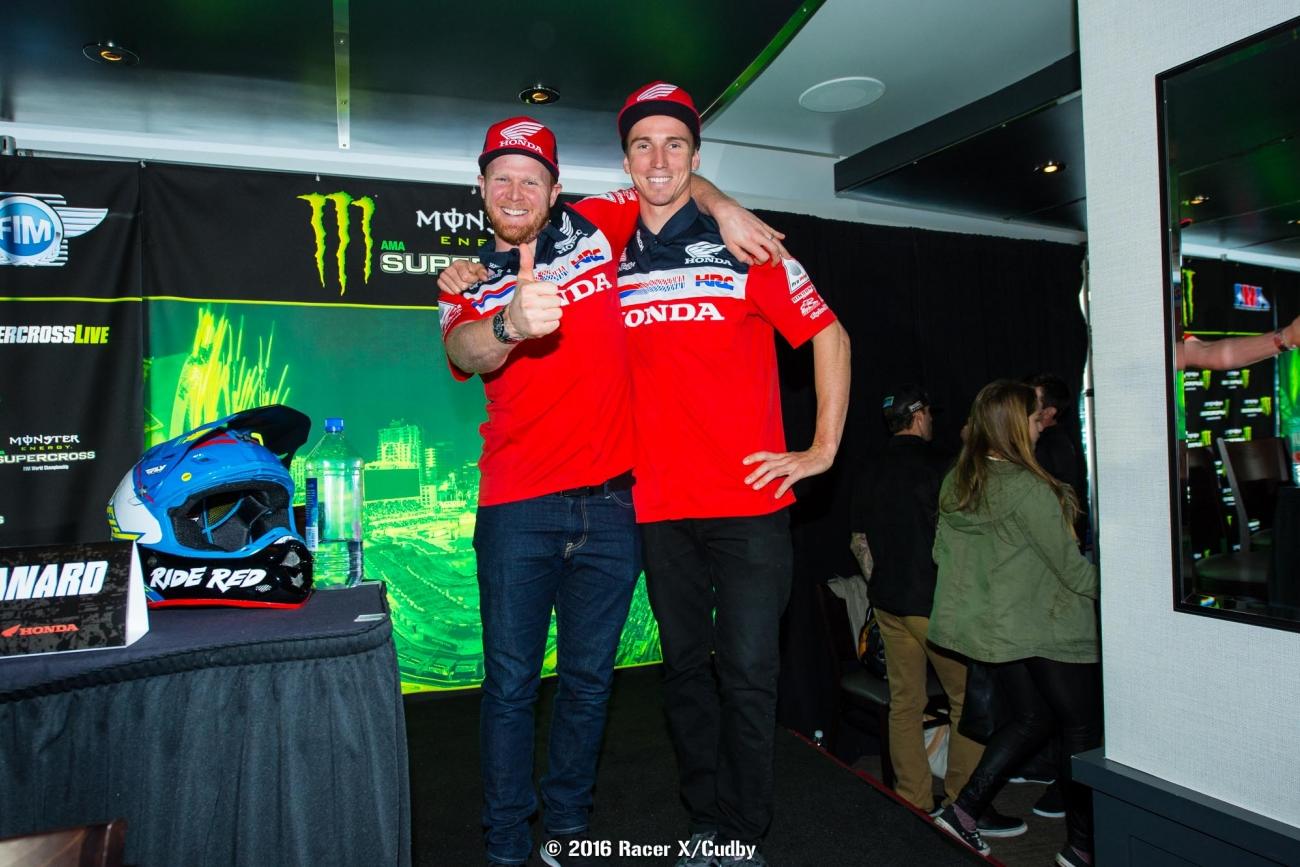 The modern-day-gladiators and world-class athletes that compete in Monster Energy Supercross begin their season this weekend, but so do you. Racer X has once again partnered up with MotoDynasty for our own fantasy league, and it’s time to start cracking. Last season was good, but this year we’re introducing some tweaks to make it even more fun.

The basic MotoDynasty league concept remains: you score points by accurately predicting rider finishes. For example, you select Ryan Dungey on your team and predict he will finish third. If Dungey finishes third, you score the maximum points. If he finishes close to your predicted position—say, first or second—you’ll still score pretty well. But if your third place rider doesn’t even finish in the top ten, you’ll barely score any points at all with that rider. The same formula exists for every other rider finish you predict—you win the game by accurately predicting the finishing positions of each rider in the field. Basically, you’re creating a chart with the final main event results before the race begins. Points for accuracy!

Last year’s MotoDynasty rules asked you to predict all 22 finishing positions in the main events (both 250SX and 450SX). That has changed. This year we’ve introduced a 12-rider card, to streamline the process. Simply: You are picking the top 12 finishing positions for each class.

There are three bonus segments to add to your team’s score. You can choose the option to guess the fastest qualifier (pole position), and/or a heat winner and/or the main event holeshot. These options exist for both classes, too, opening up six total bonus scenarious.

But where there are rewards, there are risks. If you go for the bonus and miss, you LOSE the five bonus points that are on the line. Be careful!

Those are the rules. Now, how do you win? Follow our tips!

In a normal fantasy league, you pick a few riders for your team and hope they score great finishes. In MotoDynasty, you don’t want great finishes, you just want your riders to finish where you predict they will finish. If you select Wil Hahn to finish tenth, you score max points if he finishes tenth, not if he has a career night and makes the podium. MotoDynasty is the most realistic game out there, because you have to answer the question we all ask every night: “Where do you think ___ will finish?” Is Weston Peick good for a seventh? A fifth? A third? You make the call.

Because of that, the most important part of the game is finding predictable riders. You know who is a fantasy stud in MotoDynasty? Broc Tickle. He routinely and consistently pulls in finishes in the 6-8 range. That’s MotoDynasty gold right there, Jerry. Ryan Dungey is always in the 1-3 range, so, gold again. Eli Tomac is a risky prospect, he won races last year but also had a few 20ths. With the 12-rider card, it is much more important to get your selections correct.

Bonus point sessions (fastest qualifier, heat race winner and holeshot) seems risky considering you can lose points if you get it wrong, but you can make calculated guesses. We’ll let you in on a real secret (Shhhh!): 250SX heat races are where you make the money. With the 250s split into East and West, the talent is already sliced in half each weekend, and then two heat races slice it down to a quarter. About an hour before the night show begins, go to amasupercross.com and check out the results page—heat race lineups will be posted. Often times you’ll see a 250SX heat with an overwhelming favorite. For example, what if Cooper Webb is in Heat 2 this weekend and guys like Savatgy, Osborne, Nelson and Craig are in Heat 1? Why would you not put your hopes on Webb?

New for 2016 Racer X MotoDynasty Fantasy Supercross will be utilizing a 12-man race card and three bonus options for fantasy gameplay. On your race card, you will choose the racers you think will finish top 12 in the main event in the order you think they will finish. You will score 30 points for choosing the correct winner and 20 points for every correct placement in the 2nd thru 12th place positions. If you choose a racer that does not finish in the top 12 you will score 0 points with that racer. The usual bonus play options will be available (pole position, heat winner and holeshot) but pay attention to spikes in the bonus points throughout the season!

Now a more in-depth My Series page gives you full control of your custom series gameplay. Search for a private or public series to join. Create a private series for just you and your friends or create a public series and take on all challengers. Once you create a series it is easy to share it on Facebook to let your friends know you want them to join your Fantasy Supercross league. Or share a series you didn't create to bring in more fantasy players. You can create, join, leave, share and delete a custom series at anytime throughout the year. You're in control.

Like last year, we'll be offering cool weekly and series prizes; dynasty play; private leagues that just you and your buddies can play in; weekly fantasy previews; and weekly podcasts all focused on fantasy.

New prizes are available every week, and this week, DeCal Works, Nordic Games and Youthful Edge will be awarding prizes to the top three in both the 450 and 250 classes. HJC will offer a helmet to the 450 and 250 winners as well.

IMPORTANT: There are two options to be eligible for prizes:

2) Pay  a mere $10 (per class if you want to be eligible for both 450 and 250) and be eligible for all 17 rounds of Monster Energy Supercross weekly prizes and the series prizes.

A) Dynasty play is where you test your skills against thousands of others to win weekly and series prizes.

B) Create or join a private league with your buddies, co-workers, family, the dude at the local watering hole—whoever. You can talk smack on your way to the league title.

Note: Racer X MotoDynasty Fantasy prizes are limited to US residents only.