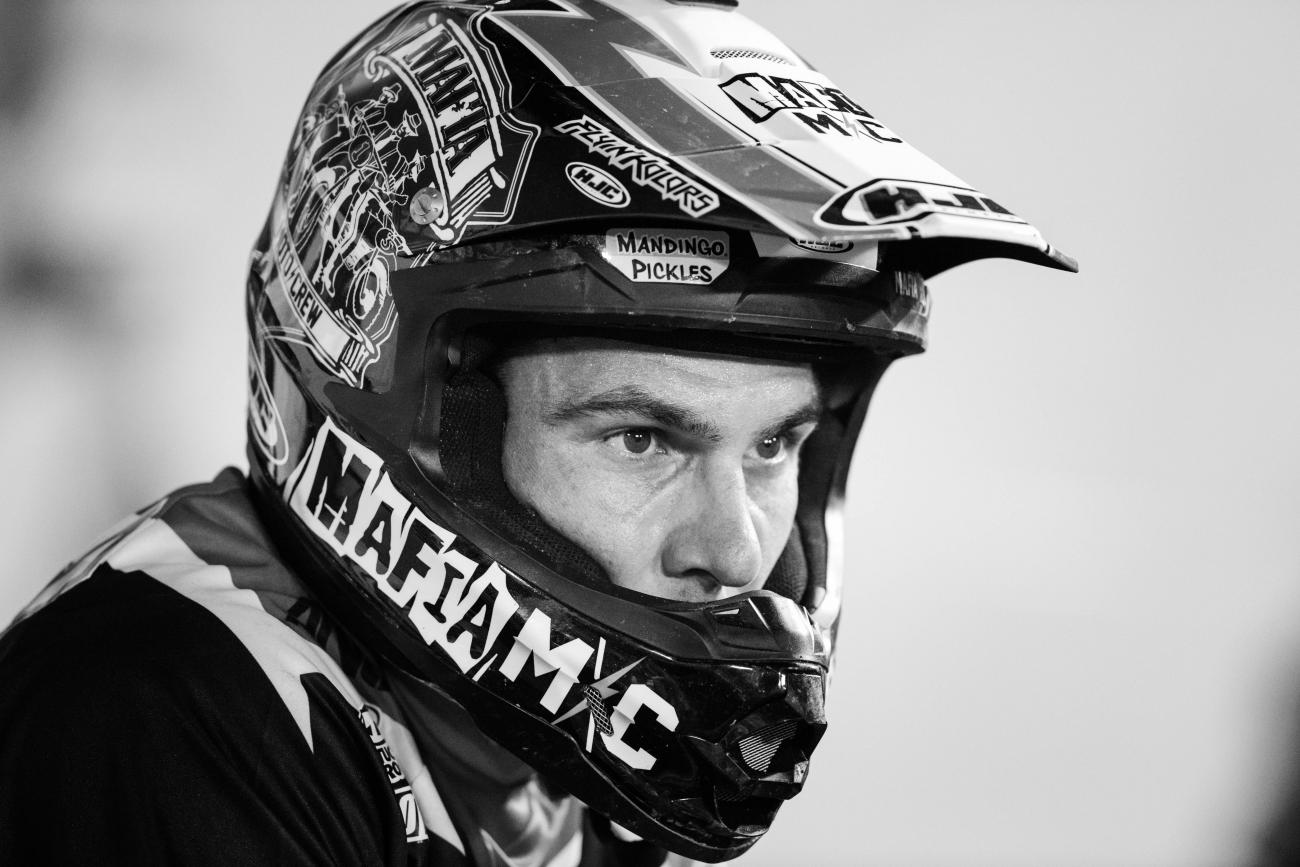 Last night, following eighteen years as a full-time professional racer, Nick Wey announced on Instagram that he would be retiring from full-time racing moving forward.

“I'm not a good quitter. So I'm going to just say it before I change my mind.. I am not going to be racing full time in 2016. I'm a bit reluctant to say I'm retired because I will ride and occasionally race the rest of my life,” he wrote.

Wey, ever the professional on and off the track, leaves a unique legacy as one of the most respected riders in the sport. He’s also one of the biggest fans of the sport for someone who made it so far as a professional. A lot of riders at that level end up racing because it’s their job. Wey just loves to race.

Many on the Racer X staff got to know Nick well during his career, so we decided to share our best memories of the Michigan Mafia member.

Davey Coombs: I've been lucky enough to know Nick since his minicycle days, and I don't think he's changed one bit. His parents raised him right, and he never got lost in all of the stuff that comes with being a professional motocrosser. He has always been funny, articulate, competitive and sincere—not a combination we see very much of in motocross. He took it all very seriously, but not so serious that he couldn't smile and joke around and just be himself.

I remember seeing an epic amateur-day battle at High Point when he came down from Michigan with his KX125 and Ricky Carmichael came up from Florida and raced a big-wheel Kawasaki supermini. Their battle was like watching two pros go after each other, and I remember thinking that Carmichael had him, talent-wise, but Wey was the better athlete. Of course Ricky would eventually get over to the athlete side and rewrite the history books, which in turn made it hard for Nick and Kevin Windham and Robbie Reynard and everybody else who happened to come along during that time to get the wins and titles they otherwise would have scored.

But that didn't define Nick, nor did it change the way he carried himself—on or off the track. He was a consummate professional, he was great with his sponsors and us race reporters, and he always gave it an honest effort. Even when we did our Nick Wey Coloring Contest with MSR, he judged each and every one of the hundreds of drawings personally, and even reached out to some of the people who entered to thank them for making a cool picture for him. He had a true appreciation for being a professional racer. Stuff like that helped him earn one of the biggest collections of race results in the history of AMA Supercross and Motocross, which you will certainly notice when you look up Nicholas Wey in The Vault.

I don't know what Nick has planned moving forward, but whatever it is, I am sure he will do it well, and he will do it right, just like he did with his professional motocross career. Congrats to Nick, his wife Nicole and the entire Wey family.

Jason Thomas: I’m not sure where to begin this. Nick and I spent a lot of time together over the years. We grew up racing each other in the amateurs and carried it into the professional ranks for another 15-plus years. I spent a few summers in Michigan with Nick and Nicole, riding and training for the Lucas Oil Pro Motocross Championship. Of course, when you are living with someone, you’re going to make some memories.

Every time Nick, Steve Matthes and I are in the same room, it always turns into a huge debate over the truthful version of how certain events actually went in our past. There was a week in Germany that had daily competitions, with the Wheel-man Championship going to yours truly (and don't let either of them ever tell you differently). See, the objective was to see who could pull off the most daring and impressive of driving maneuvers during the span of that week. My winning move came on the Autobahn. While doing 100-plus mph, I split the two cars in front of us. The cars were driving in unison and I simply had no time to wait for them. I decided to "shoot the gap", as it came to be known in German folklore, sending our rental car and two unsuspecting German participants into a three-wide formation. The shocked look of sauerkraut and lederhosen at the impromptu NASCAR race was enough to tip the scales in my favor.

Now, there was a discussion about Nick's claim to the title. It was a weak argument and justly tossed from the proceedings but in the fairness that this prestigious championship deserves, I will explain. Nick knew he was in dire need of a tide-turning performance after my Autobahn heroics. There was simply no way to one-up my moves on the hard-top so Nick decided to take his game off-road. To keep it brief, all Nick did was drive through the woods and try to do some power slides with his E-brake in the dirt. He was hooting and hollering the entire time, hoping to evoke some sympathy with his enthusiasm but there was simply no substance to his run. It was clear that he was no Wheel-man Champion.

Matthes never really had a chance at the title. All he was able to muster was a few swerves through traffic while leaving Paris. I will say that he did a bang up job of driving the entire eight hours to Germany while Nick and I were sleeping off the three-day Bercy race weekend. Other than that, he had no bearing on the outcome besides his usual wisecracks and critique.

If you ever bring this up to either of them, be prepared for a barrage of half-truths and false propaganda. Their recount of the events will surely be fueled by bitter jealousy and grotesque envy. In all seriousness, memories like that are priceless. I have so much respect for Nick as a racer but even more so as a friend. As great as Nick was on the track, he is even better off of it. He embodied how racers should present themselves for their team, sponsors, and family. He did it the right way, every time and in every scenario. Hats off to you, Nick. Well done.

Steve Matthes: I got to know Nick Wey in 2001 when I was working for a fellow Michigan racer named Kelly Smith at KTM. Obviously knew who he was—his pro debut out of Loretta Lynn’s on Pro Circuit was a pretty big deal—and by this point in his career he was at Yamaha of Troy in his last year in the 250 (125) class.

We became good friends, our girlfriends back then became our wives and we both eventually moved on to different jobs that paid better and allowed us to have less worries. The year I worked for him I stayed in Michigan that summer and lived with his family. And it’s easy to see why the guy had the career he did once you meet Terry and Beth Wey. They are great people, raised Nick, Luke and Carey right and I’m happy to call them my friends.

How many parents of riders do I share hugs and laughs with? Just the Weys.

Nick had an amazing career as a full-time racer (I bet we see him still race, this man loves motocross way too much to just quit cold turkey) and ask anyone that has worked with him or for him—we’re all part of the Wey Universe that included a guy named Big Nasty. I hung out with Wey a lot the last few years at the races and his old mechanics, his old sponsors, the promoters—whomever—would come by to say hi and chat with him. The man literally had the entire pits as friends. He did everything right on and off the track. That’s about the best thing anyone can say about a racer and it applies to the NYK.

See you around, Nick. Bravo and a slow and steady clap for you from this corner.

Jason Weigandt: Canada might provide the most friendly of borders, but you still have customs to deal with, passports, money exchange rates and the rest. That makes the Toronto race a little unusual. One year I needed a cab ride from the airport to the hotel, but I didn't have Canadian money on me yet. I was about to turn around and get ripped off with fees at the exchange rate desk, until I heard "Hey, Weege! Let's share a ride!" from over near baggage claim. It was Nick Wey. He was heading out the door with a gear bag and two Pro Circuit suspension cases (standard racer fare). Nick then figured out how to jam all of this stuff into the trunck of the taxi, which was no easy feat, and we headed downtown to the hotel. Over the next 30 minutes of bro down time, we solved all the world's problems—from travel with wives, kids and school, to sponsorship money, trainers, agents, bikes, teams and testing. You get 30 minutes with Wey, and you will learn a lot. This is a very smart man who has seen and done more in his one life then you could do in nine. Plus, unlike most pros who take their lifestyle for granted, you get the feeling Nick was just a fan who actually made the dream come to life. I always appreciated his honesty. Nick would admit it didn’t come to him as easily as it did for others, but that didn’t deter him one bit.

When you next see Nick at a race (and you will, because he can't stay away from the sport he loves) try to get even a few minutes with him, and it will be brilliant. Now, I can't guarantee he'll pick up the cab fare like he did for me that day (mission accomplished!) For cheap advice, you're better off talking to me. For everything else that really matters in life, Nick Wey is as good as it gets.