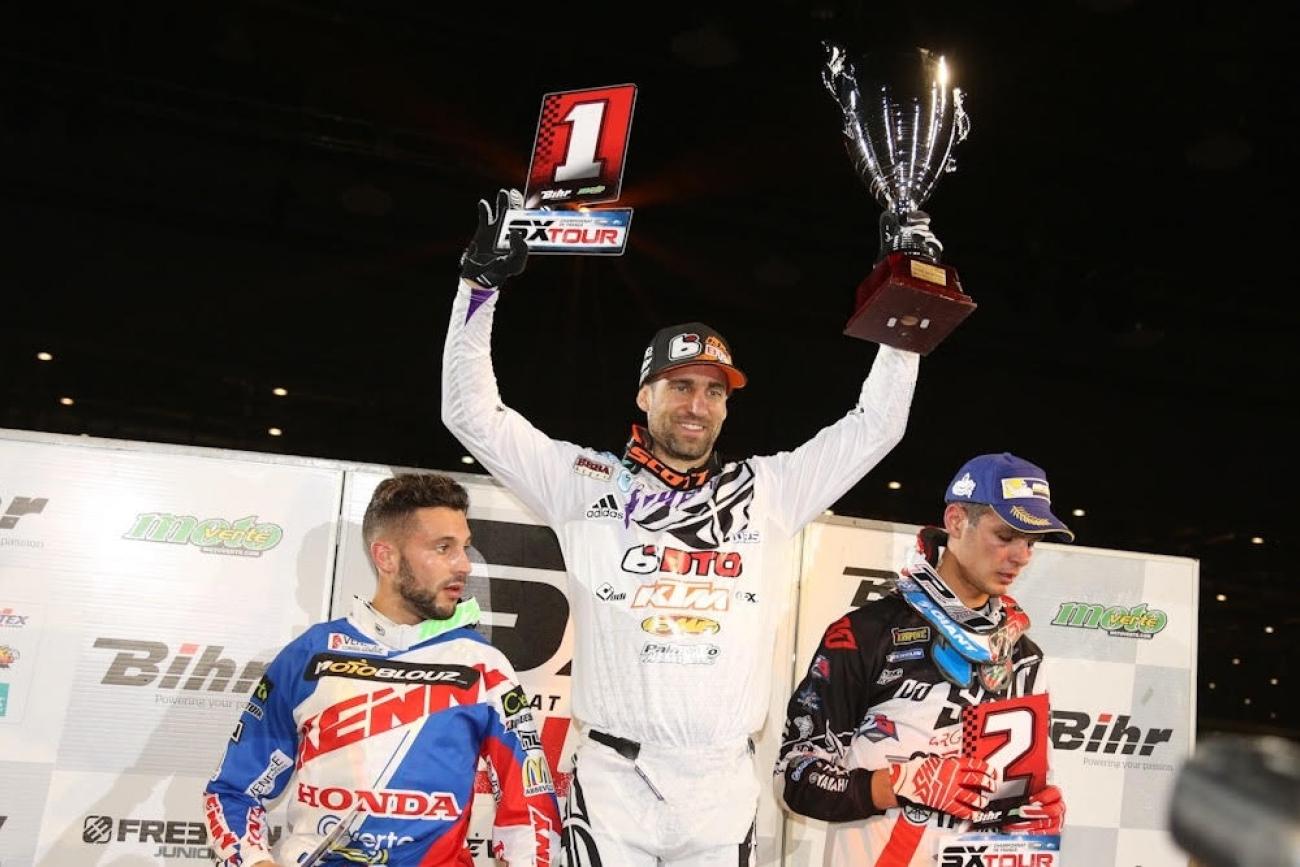 Monday King of Geneva and More

Over the weekend, the sun rose, the moon set, and BTOSports.com KTM’s Justin Brayton won another European supercross. This was in Geneva, Switzerland, and it’s the fourth time Brayton has taken King of Geneva honors. GEICO Honda’s Malcolm Stewart and Kawasaki Frenchman Fabien Iziord joined him on the podium. Steve Matthes talked to all three.

Racer X: You’re the King of Geneva for the fourth time. I don’t want to say it was easy, but you were the only guy doing the quad, you were faster in the whoops…I don’t know how Aranda was faster than you in the lap times today. But overall, just a good weekend for you.
Justin Brayton: Yeah, for sure. [Laughs] I don’t know how Aranda was faster than me either! I was telling my mechanic, man, that’s pretty much all I had! He said Aranda looked pretty sketchy. But I felt good going into the race, I felt like I was definitely the best guy, but that adds pressure, you know? You have to perform. But it was overall a great weekend, won both heat races and won both mains.

Had a little challenge in the one heat?
Yeah, absolutely. Had to work for it in the heat. I just kind of felt sluggish today for some reason. I knew I had to get a good start in the main, the track was tough to pass on and I knew if I didn’t get a good start it would be hard to do the quad and the things that I was good at that made me better. And it’s funny, I thought it was Aranda behind me the whole time! [It was actually Fabian Iziord.]

He fell right?
Yeah, with like two to go. I was pushing as hard as I could go, with three laps to go I almost crashed in the whoops. It was probably a blessing in disguise because if he wasn’t right behind me I might have cruised, but I was glad because this was good training. Yeah, a good European tour for me, I won all three. I feel good going into Anaheim, ten times better than I did last year. We’ll see!

Between Bulgaria, Genoa and here at Geneva, which one did you feel like you were at your best?
I don’t know. Three totally different types of track and three totally different styles. I feel really good about where we are on our bike. Instead of just riding at home on the hard pack everyday, I’ve kind of had to test on different tracks and see how the bike reacts. It’s been awesome. I know it sounds cliché but I’m excited , I feel good and I’m ready to go.

New mechanic for you this year. You guys seem to be working well. This guy isn’t going to know what to do when he loses!
[Laughs] Yeah, he’s awesome. It’s a funny story, he’s from Iowa like I am, we grew up knowing a lot of the same people, racing the same tracks, but I’d never met him. He was a really good local A rider, but he was coming up just as I was moved to California. We get along really well. I was saying on the plane to Italy like “It feels like we’re just best buddies traveling the world!” That’s cool. I’ve had great relationships with my other mechanics, but it’s great to know someone that’s from your roots.

Any rider give you more trouble than anyone else? Iziord hung with your for the first half of the main.
Yeah, Iziord is good, I think he’s leading the championship over here. Aranda is always good, he’s always been fast ever since I’ve been coming over here.

But I feel like Aranda has slipped off his game from his peak when he was on the Kawi.
I thought that last year for sure, but I watched the German series and he’s been winning all of that, so coming here this weekend I thought, Oh this is cool he’s back in the mix. There’s been years where it was like “Man, I’m not sure I can beat him!” But lately I’ve kind of got the upper hand.

Last question: That dragon back, jumping all the way over it. Not as fast? I’m just watching from the stands but no one did it.
That’s what’s weird. Even when I walk the track, or when I’m working with Nate Dogg [riding coach Nathan Ramsey] back home, he’s like “You’re always going to end up going inside here.” And I’ll say, “No way, I’m going to rail this turn, stay low…” but then you always end up going inside. You just cut off so much of the track. So I’ve gotten smarter. I only jumped it three times all weekend.

It looked fast though!
Yeah, it was fast, but if you did it you would end up to the right and that wouldn’t set you up for the next turn. It all just linked together by going to the inside. The older I get the smarter I get with that stuff.

Racer X: Mookie, hey thanks for making night two exciting. A crash and dead last start, watching you rip through the field, it was exciting.
Malcolm Stewart: Yeah it was a battle. I had to battle all day, those boys made me work! But, yeah, I’m happy, and I’m glad I got out of here safe, and now I get to take what I learned and go to Anaheim 1. It was good racing with Justin, congrats to him on being King of Geneva again…dammit! Bastard! [Laughs] No I’m just kidding.

I feel like compared to Lille, and Bulgaria, this track hurt the 250F the most.
For sure, I was definitely underpowered. I couldn’t get a start to save my life. The whoops were long and right out of a corner, but I got out of here healthy and that’s what matters.

Nice heat race battle today, you scrubbed by somebody to make a pass.
Yeah scrubbed by somebody and I had to stuff somebody, too. It sucks because I have to think about so much while I’m out there. I’m like, “Man, well if I go inside he’ll square me up and I’m screwed.” That’s it, we’re out of here!

Racer X: Good ride, you crashed late in the main event but you were a strong second.
Fabien Iziord: Yeah, that was a crazy race, we need to fight with Brayton and Malcolm and Vallentin Guillod. We need points for the French Championship, but that’s okay, fourth yesterday, fourth today, second and third for the French Championship. So I lost some points today, but only the final next weekend and we’re keeping a 13-point lead.

Heat race, Brayton got a poor start, he was battling with you. He got you but it was a good race.
Yeah it was a really good start. Of course he was very fast so of course he came back to battle for the win, but I stayed focused on the lead. Justin passed me with maybe two laps to go, good lines and good speed with Justin. That was the solution for the main event also.

Lille was good, too. I didn’t get to talk to you after that one. There was all this carnage there and that helped you pull away a bit.
Lille was crazy, the track was soft so there were a lot of crashes on the second night. On the first night I crashed and came back to sixth, not perfect. The second day was a great night, of course I benefit from the crash by Cooper Webb and Malcolm, so I was very happy to finish on the box for the first time in Bercy.

You’re battling with Soubreyas for this French title. Is it hard for you? You have Malcolm, you have Brayton, you want to race with them, but you have to think about the championship too right?
Yeah, exactly. We need the guys like this to come to Europe to see that speed, for us it’s fantastic. Lille is a little bit different because it’s not for the SX1 Championship [Lille does not count for French SX points], but here it’s for points, so if you fight with those guys and you crash you lose points. But I like racing with those guys, they’re very fast and have good style. It’s pretty fun.