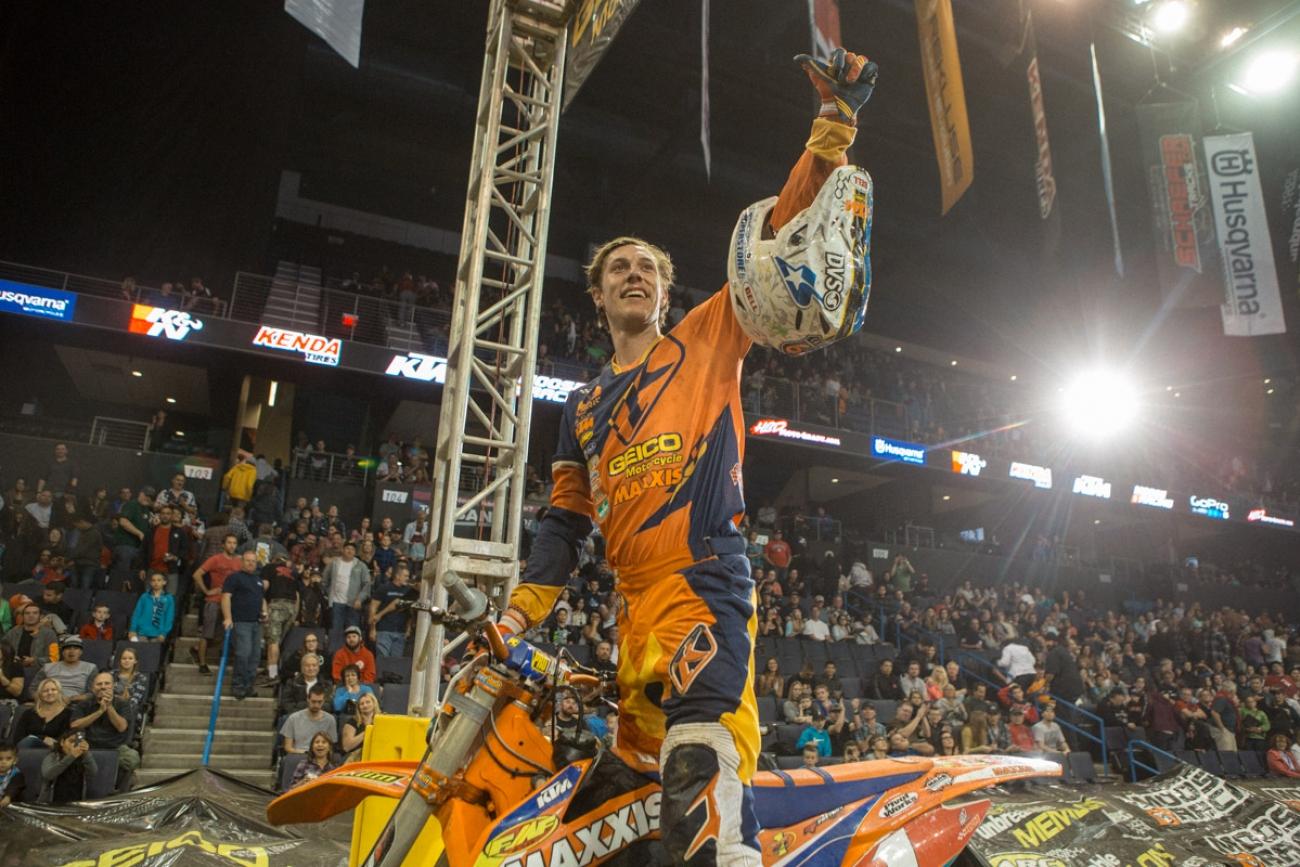 Somehow Webb has gotten all this done while also attending college full time at San Jose State, studying engineering. Soon, he’ll begin his European traveling season and compete in the FIM SuperEnduro World Championship as well. Cody’s a busy man but he found time for us during his drive back home last night.

Racer X: Hey, you’re two time champ now! I have to ask the super cliché question: was it harder to defend than to win it the first time?
Cody Webb: It was definitely harder this time. I think it was a mixture of two things: I put a lot of pressure on myself, and Colton [Haaker] rode really well this year, brought a lot of speed, and I think I was lacking in fitness. I’d get to lap 12 and I’d fall apart. I did the best I could, I tried to get more physical training in, but my schedule just sucked the last spring and fall semester in school. I did what I could, but it was barely enough, and I feel like I only squeaked by with the championship.

So this is still from juggling the college engineering student schedule?
That was a little easier last year and I was able to do my physical training. This year, I had one really tough class last semester, a couple of labs that were really time consuming. Then this semester I had a lot of credits, I overburdened myself so I could make it easier on myself the next semester! [laughs]

So what happens when you graduate and you’re finally unshackled?
I would like to think things would get even better for me. The riding can only get so good, but it’s just fine-tuning on that, and then a lot more fitness work. I would like to try more different things, like more moto-type stuff. I feel like this year there were a couple of big jumps and other things where Taylor Robert, Mike Brown and Haaker took advantage.

So now you and Haaker have taken the reigns in this series, and you both have a trials background. When EnduroCross started, we didn’t know what would work—motocrossers like Ryan Hughes and John Dowd were winning. Is the trials background still the difference or has the sport evolved beyond that?
The trials background definitely helps in the technical stuff, but the sport is so specialized now, everyone has gotten so good, it would be really difficult for a trials guy to jump right in and try it and make main events like I was doing a few years ago. It’s crazy how specialized the sport is now.

So how did this race in Ontario go? How were you playing it?
I was definitely playing it smart. I felt like, honestly, I didn’t have good speed. I’ve qualified well all year in Hot Laps, then I stalled it in the morning qualifier, then I finished last in Hot Laps during the night show! [laughs] Maybe the pressure got to me a little bit. There were two big jumps on the track, and I wasn’t doing it, I wasn’t going to risk it. Brownie [Mike Brown] ended up dislocating his wrist on one. I couldn’t afford that. When I was leading the main event, I was actually surprised how many laps I led. Taylor [Robert] was in second and jumping all of that stuff and I was like ‘C’mon are you going to catch me here?’ [laughs] Then I caught up to lapper, got slowed up, he got around me and I just thought, ‘Let me ride this puppy out.’

You ended up battling again with Haaker in the race and for the title. Explain your background with him and your relationship now.
We both grew up as trials riders in northern California. He used to be a moto guy, he had some injuries, he started riding trials. I was probably 17 and we did a lot of riding together, he got really good really quickly. We were going through the ranks together and then he tried some EnduroCross on the trials bike and did well. I thought, ‘Well, I’m beating these guys on trials bikes so I should be able to do well at an EnduroCross stuff.’ But I quickly realized I had no fitness at all! I started riding a dirt bike here and there, me and Haaker and Kyle Redmond and a lot of us were riding together. Taddy [Blazusiak] was the man back then and we were just a bunch of young kids running around. Hard to believe a few years later me and Colton are at the top of the sport. It seems like we’ve become the top two guys, and that shows in the points standings. Seems like the tension between the two of us…it has gotten pretty tense. We still talk to each other a little bit, but it’s not like it was ten years ago.

You two had some fierce battles in the last few races—some aggressive moves. So was that really heated, or was that just racing?
It wasn’t heated, I don’t think. I had the points gap and I think he was just doing what he could to maybe get me disgruntled so I’d make some mistakes and lose a few more points. It worked out in my favor, I didn’t need to win the race in Boise, I probably slacked off and started riding too soft while I was leading, and he reeled me in. Then he pushed me wide in a corner even though I was letting him by. Then this weekend, I hope they got it on video, it’s pretty funny, I looked back at him when got through the water because I knew he had caught back up to me again, I kind of pulled over and went way wide to let him by, and then he tries block passing me again! He told me after the race he shouldn’t have been so nice, and I’m like, ‘You clearly didn’t even try to turn, you just tried punting me.’ He proceeded to block pass me and then he crashed and got stuck, and I cruised over the tires, then I held it wide open and gave him the thumbs up down the straight away! I probably shouldn’t have done that! Afterwards everyone thought I had flipped him off, so I felt bad. I was just kind of messing with him. I’m glad I gave him the thumbs up, that’s actually more demoralizing.

This is actually your first year on the KTM, you won the title last year on a Beta. Was it a big adjustment?
Yeah, it actually was. The Beta and the KTM are both 300cc two-strokes. The Beta is really good for technical stuff and more trials-type riding. The KTM is just good on everything—you can even ride moto on it. But when you’re pretty much only riding technical stuff, you need to just do some fine-tuning and tinkering. I took a shot in the dark at the first few races of the FIM SuperEnduro Championship in Europe. I’m glad we had those because we didn’t have a lot of time to learn about the bike. Once I was able to start talking to the KTM Factory Services motor guys and the WP suspension guys we were able to start getting it figured out. You know, run this power valve spring here, maybe lean it out or richen the jetting there. We just didn’t have enough time between seasons to prepare.

Official factory team next year. Does that change a lot?
It does change a lot. This year I was on the satellite team, RPM KTM, and we had great factory support with suspension and motor work, but that was about it. We had an outside guy come in to be my mechanic, and he’d come over to my house sometimes to help with the practice bikes. But sometimes I’d spend half of my day working on the bike before I could go riding. Definitely next year on the FMF KTM factory team, everything will be done for me. It takes a huge weight off a rider’s back.

Now all you have to do is get that college degree.
That’s right. Almost there!