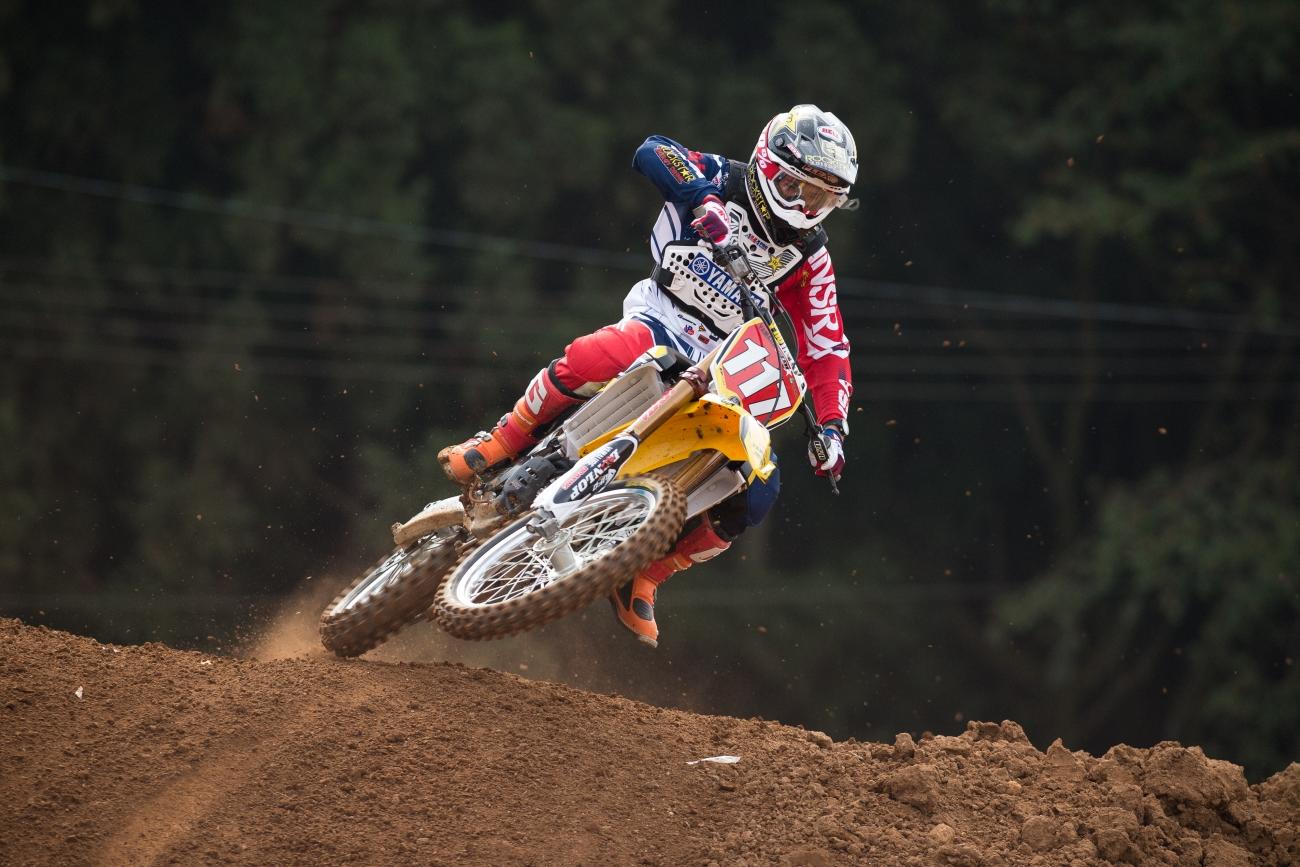 1. International travel season for the American riders is here. Give us a good overseas travel story from your racing days.

Jason Thomas: One of the most chaotic racing weekends of my career happened in the fall of 2004. The German Supercross Championship was underway, and this particular round was located in Chemnitz. For those unfamiliar with Chemnitz (see: everyone), it is in the former East Germany sector and, therefore, was under Communist rule for decades following World War II. (The city is still a bit hit and miss in areas but has improved lately.)

The prize purse mimicked that economic condition and left me brainstorming a way to increase my income for that trip. On the calendar, I happened to notice that the Barcelona Supercross was on Sunday night, conveniently just after the Friday/Saturday German doubleheader. I realized that the mission, if I chose to accept it, was to go win the German event and somehow make it to Spain in time for the Sunday night showdown. This was a tough sell for the Spanish promoter, as an all-night trek across western Europe involving autobahns, commuter jets, and shuttle buses wasn't providing incentive to meet my start money request. After some persuading (see: begging), I convinced the promoters in Spain that I could skip practice, catch a nap in the afternoon, and still be competitive by main event time.

So, the stage was set.

I headed off to Germany for the first leg of the weekend and was able to win the overall, besting the at-the-time champ Casey Johnson. Next, I started the all-night drive from Chemnitz down to Munich for my flight to Barcelona. Spurred on by the night's victory, the trip was a breeze, but as I was sitting in the terminal at six o’clock in the morning, my eyes were definitely heavy. After the relatively short flight south, I was ushered to the stadium to have my bike built for the night's racing. Practice had already happened, so I would be racing on a track I had never ridden before! I did the smart thing and let everyone go on the start and tried to pick up the jumps and race pace as quickly as possible. I knew I needed to get to eighth place by the heat race finish, and luckily, I was able to do so. The semifinal would give me another chance to dial the track in much more effectively and become competitive.

As for the main event, well, I just so happened to pull the holeshot and, after fighting with the leaders for a few laps, settled into fifth spot and counted down the laps. Even at full strength, beating Damon Huffman and Mike Brown would have been tough that night, but I was nowhere near strong enough after the weekend I had already endured. I didn't win, but a fifth place was respectable at a race like Barcelona, and, more importantly, I proved to the race promoters that I would indeed be able to pull off the unlikely plan.

Needless to say, I slept every possible second of that night, the next day as I flew back to Germany, and then on the long haul back across the Atlantic. I had maximized the weekend and had the Euros in my socks, backpack, underwear, wallet, and pockets to prove it.

David Pingree: I had a pretty interesting trip that started in Dortmund, Germany. I lined this race up and got my buddy Chad Pederson hooked up with the promoter as well. He hadn’t done much racing at the time, but I figured the track would be basic and we would just have fun. Well, the track was rutted and tight and nasty and way tougher than we thought. I didn’t do very well either night, and the guy who ended up winning was none other than Larry Ward, who also hadn’t been racing much. He was still good at hitting on girls, though, and I didn’t let my wife out of my sight when he was around.

The last race of the night, Chad flew off the track and landed on the concrete floor, breaking his ankles. We helped him to the cab in the morning and sent him to the airport solo, hoping he would make it back. My wife and I, meanwhile, hopped on a train for the Czech Republic. I negotiated another race the following weekend in Brno, and the lady who I was dealing with spoke about as much English as I did German. The train ride itself was really cool, but when we got off it was dark and I had no idea who would be picking us up. Fortunately, they found us and things worked out.

Factory Phil Lawrence joined us that weekend and we had a pretty good time. We got to see a Red Bull Crashed Ice event in Prague, visit some incredible castles and churches, and eat at one of the weirdest places I’ve ever been to. This place was carved out of stone and decorated with fake rock like it was an underground rock mine. There were chinchillas in cages throughout the place with all kinds of skulls and demons chiseled into the wall. It was super-creepy. The vibe was like if Dracula had a nightmare while tripping on acid. I was skeptical, at best, about the food there, and mid-dinner I looked over and saw a couple of chinchillas getting it on in a cage next to me. That was it. Check please.

I won one of the nights there, and still have the cup and a bottle of champagne the guys bought me.

Jimmy Albertson: The first time I met my wife Georgia in Sweden, we had a late night at the bar with my brother and Paul Malin. Long story short, we missed our flight out. The only other flight that I had the money to buy was in Norway. My lack of funds was due to Martin Honda's awesome track record of paying riders. My brother and I did not have cell phones that worked, so we found the nearest train station, and rode the train all day to make our flight in Norway. We finally got to our final destination, and as I am dragging two gear bags, the door closed on the gear bag that I was pushing; my brother had already stepped off the train. So we were separated, and I was stuck on this train for who knows how long, I knew I would probably miss another flight, and I didn't have a cell phone to get ahold of my brother. It took me over two hours to get back to the right station. We missed another flight and slept on the ground at the airport…. And, yes, we were very hung over.

Small price to pay for meeting your future wife though!

2. Trey Canard, Cooper Webb, and Jeremy Martin all raced in Japan last weekend. Have you ever tested or worked with Japanese or European engineers?

Thomas: Japan is one of the few countries I have yet to visit. I don't think it will remain in that category for too long, as my current job will see me heading to Asia sooner than later, but as of yet, it's a mystery. As for the European engineers, I did work with them when I was on the DKNY/Fast by Ferracci factory Husqvarna effort in 2001. Marzocchi was the suspension supplier, and we worked with them quite a lot, developing new suspension settings for the 250 two-stroke in supercross. Those were early days for me, and I was naïve to the ways of factory testing. I will say that they were great to work with, even if the results didn't show that on paper.

Ping: I never made the trip to Japan, but I did plenty of testing with their technicians over here. They are all very quiet and soft-spoken. I have been to Mattighofen, Austria, where KTM’s headquarters are located, and spent some time there. They had a big party for all the team riders when I was part of the Red Bull KTM team here in the States, and they brought us over. It was one of the craziest parties I’ve ever been to. Kurt Nicoll jumped a Dakar bike on stage, and people were ripping through the banquet hall on KTM 65s and doing burnouts on the Factory GP bikes. It was nuts. When it’s time to get down to business, though, both sides take it very seriously, and they are amazing at helping you move in the direction you want.

Albertson: I've tested with both. The Japanese I worked with, no matter what you say about the motorcycle, will just shake their heads and say yes.

Rider: "This bikes a piece of sh-t! I'm going to set it on fire and launch it off a cliff!"

The Japanese are very good about documenting all the information. They are very smart, and the kindest nationality you will ever meet, in my opinion.

3. What are your thoughts on the Bogle hiring?

Thomas: I think this was the best possible scenario for Bogle, once the Wil Hahn to Monster Energy Kawasaki thing was a lock. He gets to stay on a program that he is comfortable with and has access to a full-on HRC works Honda. He’s following in the footsteps of Eli Tomac with a program that showed great success this past season. He doesn't have to deal with the headaches and growing pains of a new bike, new team, new mechanic, etc. He can jump right into his off-season program with great continuity, providing a much more stable platform to enter his rookie 450 season.

Ping: It seems like a good fit. The bike definitely won’t be an excuse, because Tomac was destroying people on the exact same machine last summer. This is good for everybody, and hopefully he can turn it into some good results. Justin works hard and has the talent, but he will need to find another level this season.

Albertson: Bogle staying at GEICO was not a very "Smartop" move. See what I did there? I'm glad to see him staying put. There's a lot to be said about working with the same guys for multiple years. They know how to give Justin what he wants. I'd say this is a best-case scenario for him, bike and team wise.