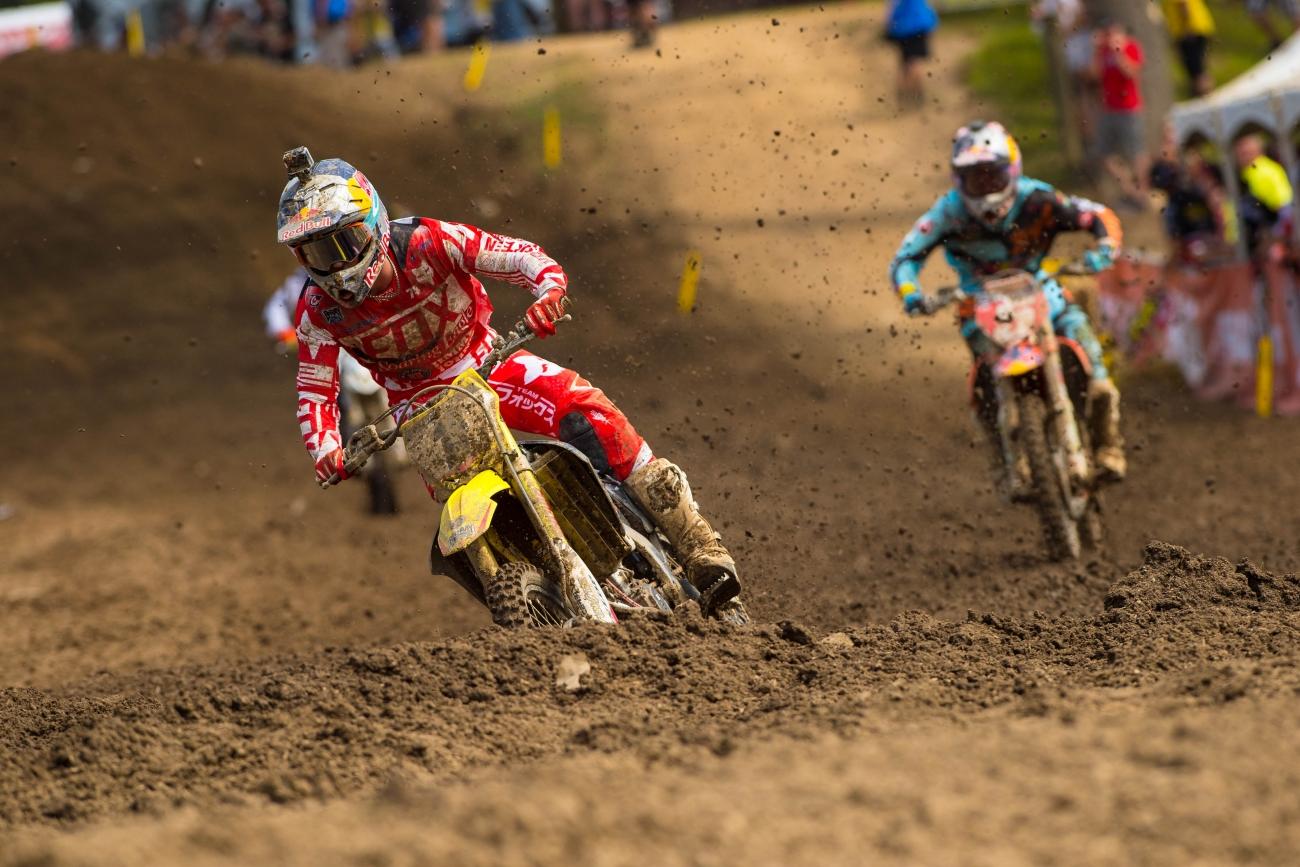 All motorsports bridge man and machine, but each one balances it differently. They run the gamut, with Formula 1 packing the ultimate expression of technology, and motocross the ultimate in athletics, but deep down every motorsport is the same—it’s a bunch of fearless people battling for the win, and that leads to good old-fashioned drama.

The motocross world is on hold for a bit right now, but you can see the same drama we all love on display in other series. Over in MotoGP, actually, the action has gone beyond what you’ll probably see anywhere else, as Valentino Rossi tries to hold on for his tenth career championship (and eighth in the premier class) and his first since 2009.

His Yamaha teammate Jorge Lorenzo is now on a tear and making up ground, and defending champion Marc Marquez, who struggled early in the season and is out of the title hunt, is becoming the ultimate spoiler. Two weeks ago, the race in Australia was about as good as any race you’ll ever see, with Lorenzo, Rossi, Marquez, and Ducati rider Andrea Iannone passing each other literally fifty-three times throughout the event. Marquez made a last-lap pass to win it, but just as the smoke cleared, Rossi threw a match on it all by accusing Marquez of messing with him during the race to help Lorenzo get away and gain points. Why? Rossi says he’s not sure, but he thinks it’s either because Marquez and Lorenzo are both Spaniards, or because Marquez hopes to someday break Rossi’s records, so blocking one title now means one less to win later.

It got worse, or better, this past weekend, as Marquez and Rossi passed each other in every corner for about two laps, and then Rossi knocked Marquez down. Now there’s even more heat. Like, lava heat. The move was either dirty or perhaps just revenge, because some think Marquez spent those laps purposely slowing and dicing with Rossi.

"I tried to go wide to get a better line to make him slow because he just rides to cause me problems," Rossi says. "Unfortunately, he came to me, and I think he crashed in that moment."

Maybe it was dirty, maybe it was an accident, or maybe Rossi just lost his cool under championship pressure. Either way, the drama is nuts, and now Rossi, due to a penalty for knocking Marquez down, will have to start the final race on the back row. If Lorenzo wins and Rossi doesn’t climb to second, Lorenzo wins the title. Marquez might want to be a part of that.

A few hours after that was going on, the Formula 1 USGP took off in America at Austin’s Texas Circuit of the Americas. The last two F1 seasons have featured Mercedes dominance, so most of the battles featured teammates Lewis Hamilton and Nico Rosberg. Hamilton had a small edge last year and a bigger one this year. On Sunday, Hamilton banged into his teammate off the start, and later Rosberg blew it when he went wide in a turn while leading late.

"Have you ever seen them try to eat ox testicles on Survivor?" Rosberg writes in a German newspaper. "Absolutely disgusting! That's how I felt after the race in America."

After the race, Hamilton threw a second-place hat over to his teammate and Rosberg threw it back at him.

"I was just pissed off. At myself, at Lewis, at the whole situation. Everything!

"I'm not talking about losing the world championship, because Lewis deserved that this year. But Lewis didn't win the race in Austin. I lost it.

"If you can explain a mistake, there is no problem. But at the moment it feels as though there is something invisible stopping me from succeeding. An enemy that is so hard to combat. Some call it fate, others bad luck," he says.

"There are internal rules in our team," Rosberg reveals, "and I kept to those rules. Lewis did not. He went much too far."

Over in NASCAR, the championship is close because of the Chase for the Sprint Cup, which is a series of three-race segments to determine the final four drivers to race for the title in the last race of the year. Say what you want about NASCAR, but it does have parity, so if you take a field that’s really close and really deep and tell them they have just three races to decide their fate, drivers will do anything to get an edge. Late on Sunday at Talladega, defending champion Kevin Harvick realized his engine was about to blow, and with it, his season would be over.

A ton of stuff happened because of this, but I’ll sum it up as simply as I can: Harvick had just enough power to circulate during the caution flag laps, and when the race restarted and went to full speed, he knew he would get yarded, dropped to the back, and eliminated from the championship.

He ended up ramming into another car, igniting a big crash, bringing out another yellow flag, and forcing the race to end (NASCAR had previously announced that, at a big track like Talladega, they would end the race under caution if there was a crash on the final restart. They let everyone race it out a few months ago at Daytona, and Austin Dillon got into one of the worst crashes ever, so this was a safety move).

Harvick stayed alive in the title race because the crash that he started froze the results before he dropped back in the running order. Of course, we’ll never know if he did this on purpose, or if he was just struggling to get out of the way with an ailing car and got into a wreck.

This week, Harvick told his side at media day. "They can look at it one hundred different ways, but you can't quit. You can't roll over and be done with it and say, 'We tried our best,'" Harvick says.

Three different series with three very different championships, united only by pressure and competitiveness. It’s the human element that makes it most interesting.

"We are sportsmen, but we are also human," Rosberg says. "We are under tremendous pressure all weekend."