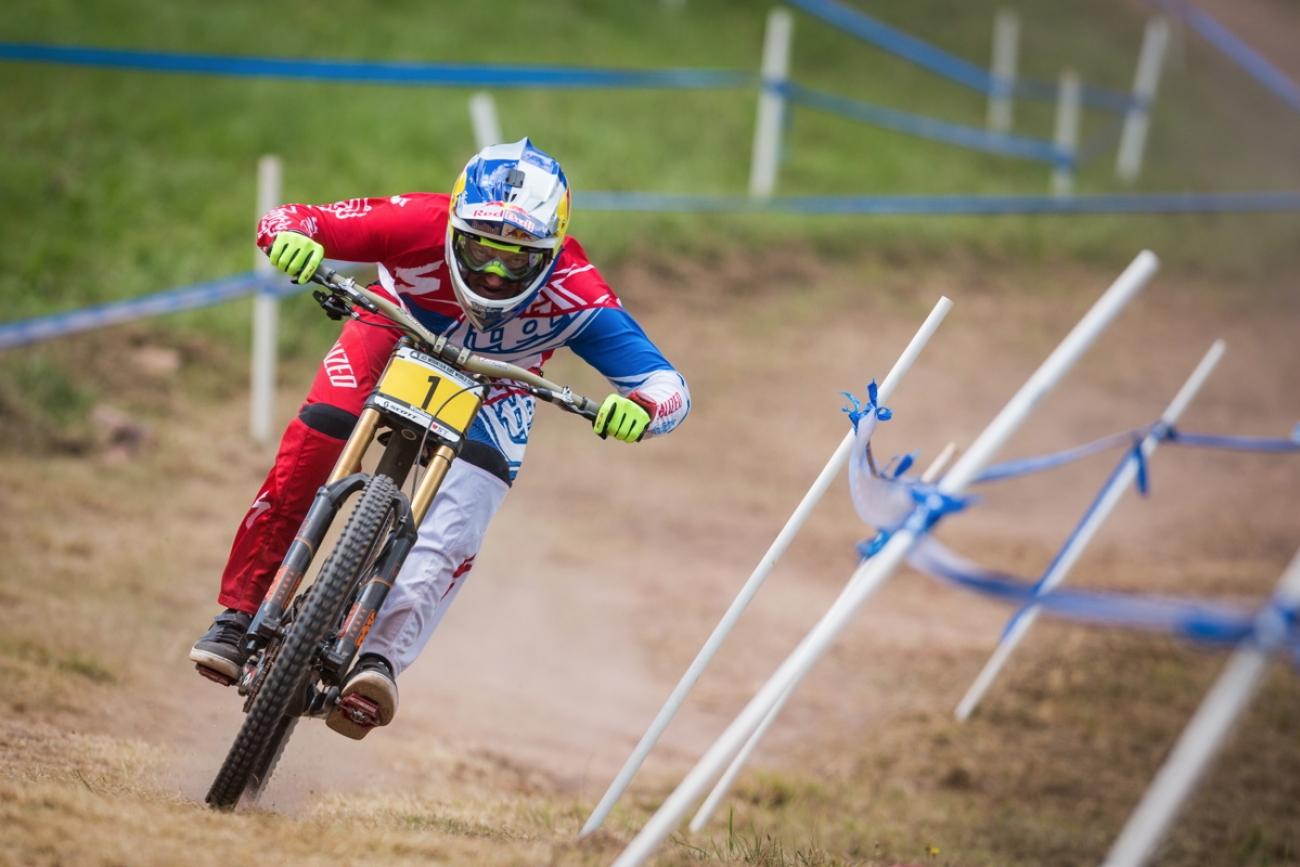 Aaron Gwin is the arguably the most successful American downhill mountain bike racer ever, having just won the UCI Downhill World Cup Championship for the third time this year (2011-2012, 2015). The titles alone are impressive enough, but his story makes it all the more remarkable. Gwinn didn’t even try riding a mountain bike until age 20, as he spent his formative years as a motocross racer. And while bicycles are now his main trade, he still claims motocross and supercross as his favorite sport. He still rides, and he still watches all the races.

Gwin was visiting KTM yesterday; we rang him up to ask about all things mountain bike and motocross

Racer X: I feel like mountain biking, and especially downhill, keeps morphing closer and closer to motocross. I know you rode moto growing up and you still have a connection, but overall, for everyone, these sports seem like they’re pretty close.
Aaron Gwin: Yeah, I’ve always kind of laughed at it, really. I know a lot of guys from factory Honda and KTM now, lots of riders and industry people, team managers, and I’m always telling them how cool it is to be at a supercross, and they’re like "ah, whatever" because all they want to do is watch mountain biking and talk mountain biking. And I just want to talk supercross! But a lot of the motocross guys, it seems like they’re more into mountain biking, and a lot of the mountain bike riders are more into motocross. I think a lot of that is, if it’s your profession and you do it every day, it’s more enjoyable to have a fun form of cross training. You’re not always under the gun and on the watch trying to get better. You can enjoy it a little bit more. It’s pretty similar too, but it’s funny how they’re merging more and more.

I was wondering that! Seems like a lot of sports frown on motocross as cross-training because of the danger factor. But it really does help, skill-wise, for you guys.
For me it was always a big help, naturally, because I grew up with a motocross background. It’s line selection, fitness, and the speeds are faster and the bikes are heavier, so when you jump on a mountain bike, it’s almost like training on a 450 and getting on a 250. When I get on a downhill bike after riding my dirt bike, things slow down a little bit. You need to manage it, though, and not twist a knee or have a big crash or something!

You mention motocross tracks, but do you also go out on gnarly trails, hills, single track, and the kind of stuff? Do you try to simulate mountain bike trails?
Yeah, for sure. That’s kind of more of what I’m into now. In the off-season I roughly ride once a week, and we try to go out in the desert and try to find hills, rocks, gnarly terrain, flowing trails. For me it’s cool because you get the experience of downhill without having to pedal uphill!

Lately we’ve been going down to Baja. I went to San Felipe with some friends and did some pre-running. Man, after you go fifth gear every day for five days, you feel like you’re a bit more of a man on the bicycle!

Explain your motocross background.
I guess it all started when I was 4 and I raced BMX. I did that until I was nine, I was kind of a top-level kid, we went all over the country and raced nationals and stuff. I switched over to motocross around 12, and raced until I was 17. Same thing there, started as full beginner, couldn’t work the clutch, but after a few years the goal was to go pro and race supercross. Like a lot of kids, though, I got hurt a lot and my parents got into serious debt. They just wanted to support what I wanted to do, but the injuries and the debt just kept piling up, and I stopped. I got into downhill by accident, I guess.

So you weren’t even thinking of being professional?
No, I was just working normal jobs, some pretty crappy jobs, like plumbing and digging trenches. Through a mutual friend I met Cody Warren, who was the national downhill champion at the time. He invited me out to ride with him one day, he gave me a bike to borrow, and it was fun. Then he invited me to a local race, I signed up for pro and I got third, and that was probably my third or fourth time on the bike. After that he was like, “Dude you should start racing!” I needed to make a decision pretty quick, because I figured I was going to start college and find a career. I had two or three local races, finished on the podium each time, and I got a call from Rich Houseman, who is still a good friend of mine, and he offered me a ride on one of the local teams. Basically just a free bike and some gear. I decided to go for it. I figured racing might not always be there but college always will be. Then everything happened really quickly from there. I believed in my skills, but I didn’t really know for sure. I had a good couple of races, and then the national level program, the one above me, they had a guy get hurt so they let me fill in for him at a couple of races. I did good, beat a couple of the world cup guys. They sent me to a World Cup race and I got a top ten. By the end of the season I signed a full-time contract to work for Yeti for the next two years. It’s pretty wild how quickly it happened!

You’re racing the World Cup. Where are you based? How often are you in Europe?
Well, everyone does it differently as far as where they’re based out of. Most of the races are in Europe, and they usually run April through September. You can mix in some national races, too. For me, I prefer to be home, so I come home between all the races. I fly back and fourth, but I feel like I’m fresher when I get to come home.

How rare is it for an American to be battling for these titles?
Yeah, I’m definitely one of the few. I think when I got that top ten at a World Cup, I was like the first American to get a top ten in a few years. There are a few guys doing pretty good now, a few Americans have broken into the top ten, and there are some good young kids coming up. But, yeah, for the last five years or so, it’s pretty much just been me.

That’s crazy. Now of course we have to talk about the run that went big, that went viral, when you won a race after your chain broke. What was running through your mind when that happened? Did you think you had a shot?
To be honest, not really. When you watch the video it looks pretty good, but they don’t show some of the sections in the middle of the track where all the pedaling was. I remember feeling good in some of the sections, but then I’d hit other sections and have to roll the jumps! I was just trying to tuck and carry speed, but I remember thinking I was getting smoked because I couldn’t pedal. Then the bottom of the track got steeper again and I was able to get some speed, those are the parts you can see on camera. It would have been nice to get in a pedal stroke here and there, but nothing like it was in the middle of the track. At that same race last year, I was leading the points and got a flat tire. It ended up costing me the title. When the chain broke I didn’t want to lose the points so I was hoping to maybe get a top ten or something, just salvage some points. So I just tried to put my head down and did the best I could.

With these titles, how do the guys treat you when you go to the supercross races? Are these guys pumped on you as much as you’re pumped on them?
[Laughs] Yeah, it’s really kind of a trip. Some of them probably don’t know me, but a lot of them do. I looked up to a lot of these people since I grew up as a moto guy, and those were the guys that were cool in my mind, and now they come up to me and say “What’s up?” It’s a trip because I still look up to them! I still watch every race and it’s still my favorite sport. We joke now because my family was going into debt when I raced motocross, we spent everything we had to get two bikes and get to the races. I think they’re still paying the credit cards on those bikes! But now KTM has me on their loner program and I get two bikes every year, and also gear, parts and everything else. It’s funny because I don’t even race motocross anymore and now I’m get supported really well. It’s a cool blessing for me and I enjoy it.

Who are some of the riders you grew up with?
Dean Wilson trained with the same trainer I trained with. I remember him as a 13-year-old kid when he had just come down from Canada, and he’d be out there mobbing through the mud puddles in the hills on rainy days. He was just this ratty little kid pinning it on an 80. I met Trey Canard years ago in Texas. I was actually working as a mechanic for one of my friends, before I got into downhill. We went down to do a camp with Shannon Niday for a couple of weeks before Loretta’s and I met him. There are guys I look up to and follow just because I’m a fan of the sport, but I know some of them, like Eli [Tomac] for sure. I trained with his dad, Johnny, when I first got into downhill. Me and him and Eli would train together when they were out here, and we still talk at the races.

Things keep melding together. Someday guys are just going to race both!
[Laughs] I know, and I’ve thought about doing some races. Not nationals or supercross, that’s a whole different deal, but off-road stuff would be pretty fun. Racing brings a whole different element, though, you’re not riding by yourself, you can just get t-boned by someone wide open! I’d have a lot of people mad at me if I got hurt at a race!