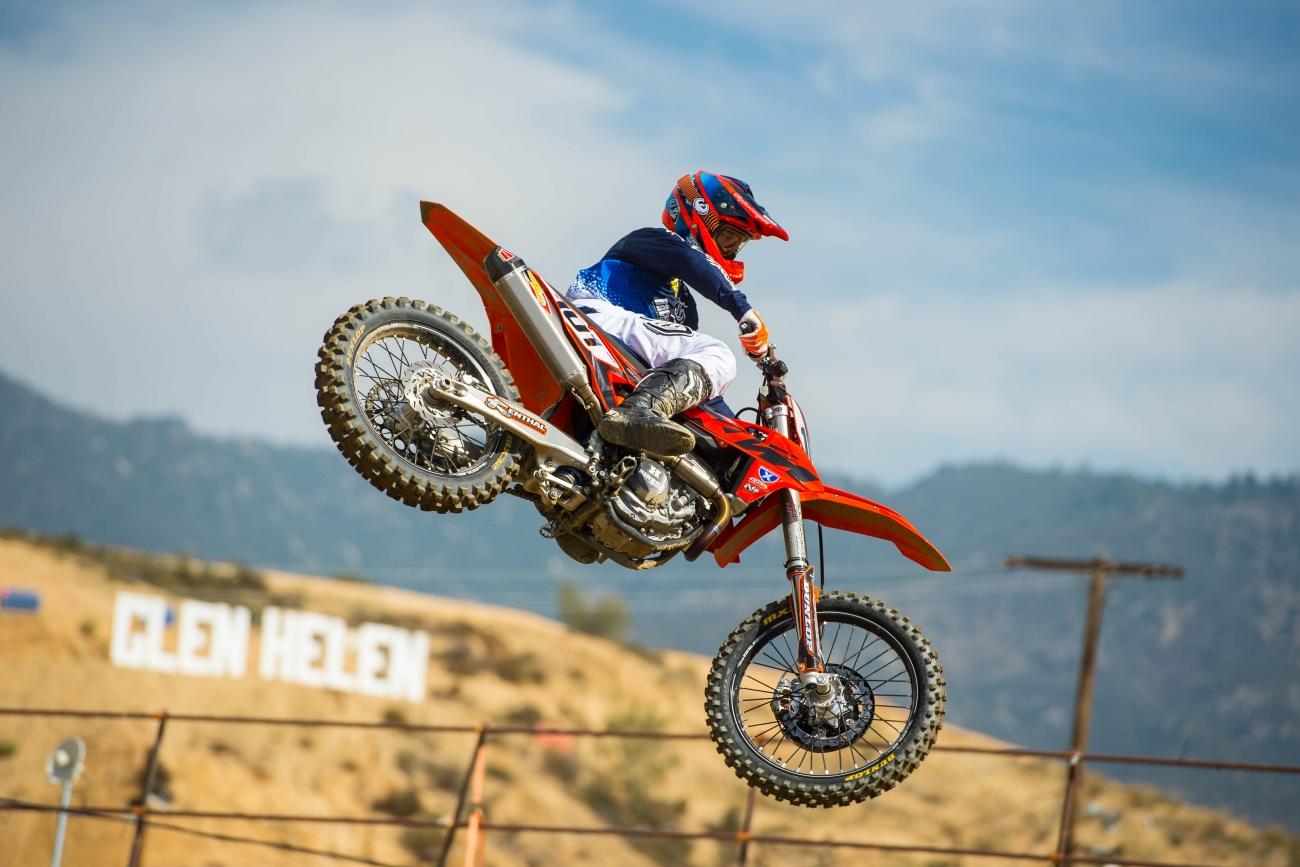 What made the GOAT so great? Something tells me it was not raw talent or smoothness; it wasn’t outstanding bike set up skills either. I don’t recall anyone speaking about his impeccable corner speed!? He also does not strike me as an exceptional athlete by birth (on the physical side). Nonetheless, the man captured two perfect outdoor seasons and countless trophies indoors and outdoors. I can only come up with an uncommon amount of determination and a set of brass that is still looking unrivaled (Eli Tomac is working on it though) and a right-hand twist of steel.

Shine some light on the legacy from the inside line!

Ricky Carmichael wasn’t born a physical specimen of athleticism. And he didn't come from a family with a racing pedigree or even a history of racing motocross. Ricky started his racing career on a Yamaha Tri-Zinger, using exactly one wheel more than any self-respecting motorcycle racer would need. And yet, despite having none of those things in his repertoire, he became the most accomplished racer in our sport. Carmichael had a few things going for him that steered him into success.

First, he began winning at an early age. Call it a natural sense of balance or competitiveness or whatever you want, but he learned very early on that he could win and he didn't like losing. Winning, like losing, is a learned behavior, and guys that figure it out early and believe they can and should continue to win usually do.

Second, he had a family that pushed him to give his best. His mom, Jeannie, is known as "the Sarge" for a reason. He could be thirty-nine minutes into a forty-minute moto at the end of the week on a scorching hot day, and if his lap times dropped one second, he heard about it the rest of the day. She didn't accept excuses, and it was either going to break Ricky or make him. (Spoiler alert: He didn't break.)

Third, he (and his family) put good people in place around him. From the sponsors and teams he rode for, to Johnny O'Mara working with him, to the friends that made him sandwiches and drove his motorhome, RC had a solid group of people around him that kept him grounded and going in the right direction.

Fourth, he stayed healthy. I don't really know how he pulled this off because he didn’t like to let off the throttle, but he only had one injury that put him out for a season and that was a torn ACL. And he didn't even crash when he did it!

Last—and the most difficult to pinpoint—was his determination. He wanted to win so badly that he was willing to work harder than anybody else. By the time people figured out how intense his program was, he was already on another level and they couldn't catch up.

I don't know how long it will be until we see another rider who can match RC's records and legacy. Like Jeremy McGrath's record in supercross, they may never be touched. I can't speak about the brass because I never sat across from him in the Pro Circuit truck, but there is no question he knew how to twist the throttle.

From Stefan Everts' techno track to Jeremy McGrath's blue hair and chops, there were some pretty unique faux pas in the 1990s (and, of course, every decade before and after). Since you were one of the guys in the pits, what do you reckon was the most standout of those "mistakes"? I'm not faulting them, either, because I've made worse decisions (all without being a champ of any kind).

The 1990s did produce some pretty awesome trends that likely left an aftertaste of regret like a cheap beer. Off the top of my head, literally, is the mullet. Did I run one? Does a bear sh-t in the woods? Look, I will not apologize for that because to this day it looks cool to have hair hanging out the back of your helmet. It's unprofessional and inappropriate for anyone over 25, but it's still bad-ass. If you permed your mullet, well, I can't really help you. You stepped in a big pile of fashion doggy poo on that one because no man should ever get a perm. Ever.

Another big blunder that started in this era was the bicep tattoo. You really had two choices, and neither of them was good. You could go with the barbed wire, which even the great Pam Anderson fell victim to. Or you could be slightly more vague and just go with a tribal band. I'm pretty sure the tribe you belong to is not that cool. Sorry. I managed to sidestep that one, or I'd be at the laser removal center faster than you can say, "Kenny Watson's Bad Boy Club tattoo." That reminds me: Bad Boy Club tattoos were also very high on the regret-o-meter.

Goatees. Sigh. What can I say about the little tiny beards that took over the sport during the McGrath era? I had one. It was patchy and terrible and made me look more like the bearded lady at a circus than a man with facial hair. What I really wanted was to win races like Jeremy, but I couldn't make that happen, so I went with the mini beard. Jeremy actually ushered in many moto trends, including pierced ears, pierced nipples, tattoos of yourself, oversized necklaces, and shiny button-down shirts. Jeremy was so much larger than life back then he could have worn a garbage bag for a shirt and empty Kleenex boxes for shoes and we would have thought it was cool.

The good news is those fads only exist in photos and a few video clips anymore. Well, unless you belong to the bicep tattoo club.... That's forever, bro.

About a year ago I set aside a 450 with engine work and jumped on a new and stock YZ250. Much to my surprise, the YZ felt plenty fast and I was actually able to use all the power at times. I had to shift more, but riding the bike was very enjoyable. With this in mind, have we gone too far with horsepower? And more importantly, has this increased horsepower led to more and increasingly severe injuries? I don't like the idea of young kids going from an 85 to a built 250 with 45-50 horsepower. Also, I think sending vet riders out on a rough and rutted track with sixty horsepower is just asking for trouble. On a personal note (knock on wood), I never got hurt or even had a bad crash on a two-stroke. But when I switched to a four-stroke, the broken bones, concussions, and dirty crashes started. As I enter my mid-thirties, I rarely race but just want a fun bike to play around on with my buddies. I'm ready to get a YZ125 and flashback to my '99 RM125 and the 125 C class.

Can we make the sport safer by going back to lower horsepower two-strokes, or perhaps switching to 150 and 250 four-strokes? If motocross becomes too dangerous, fewer people will buy bikes and show up at races. And we will have a big challenge on our hands in the next 10-20 years as vet racers get too old to ride, and decreased birth rates will shrink the peewee pipeline.

I've ranted about this several times before, but I think the future of the sport depends on our leaders making good decisions for us right now. The 450/250 four-stroke model isn't working. Cost is too high, and, if we are being honest, the 450 is too much bike for most folks. The manufacturers have done a great job of pushing forward the technology on these bikes and making them easier to ride, but if only upper-middle-class people can afford them, we are hurting the growth of the sport. We can try to class it up all we want, but motocross is a blue-collar sport, and we've lost sight of that. My opinion, for whatever it's worth, is that we need to bring back a 125 class as an entry point for the sport. These bikes are inexpensive, simple to work on, and light enough that riders can work on technique without the extra weight and power of a 250F. All of the manufacturers either have these bikes, or at least have the tooling to start producing them again. The 450 class could easily be converted to a 350 class.

Manufacturers could use their existing 250 chassis and retool the motor for the lower cubic centimeters. You can look at KTM's current 350 and see that this is a viable option. Their 350 weighs less than many of the current 250s and makes plenty of horsepower, even for a bigger guy. The lighter weight and reduced reciprocating mass makes the bike much easier to ride and control. Like everything else, politics and money are the big roadblocks to making any change here. One thing that makes a big difference is where consumers spend their money. If more folks are buying two-strokes again (and they are), the manufacturers will see that and respond. You've seen first hand how much fun those "old" bikes are to ride, and unless you are making a living racing, that's all that matters. Now go get that 125 Yamaha you've been wanting.