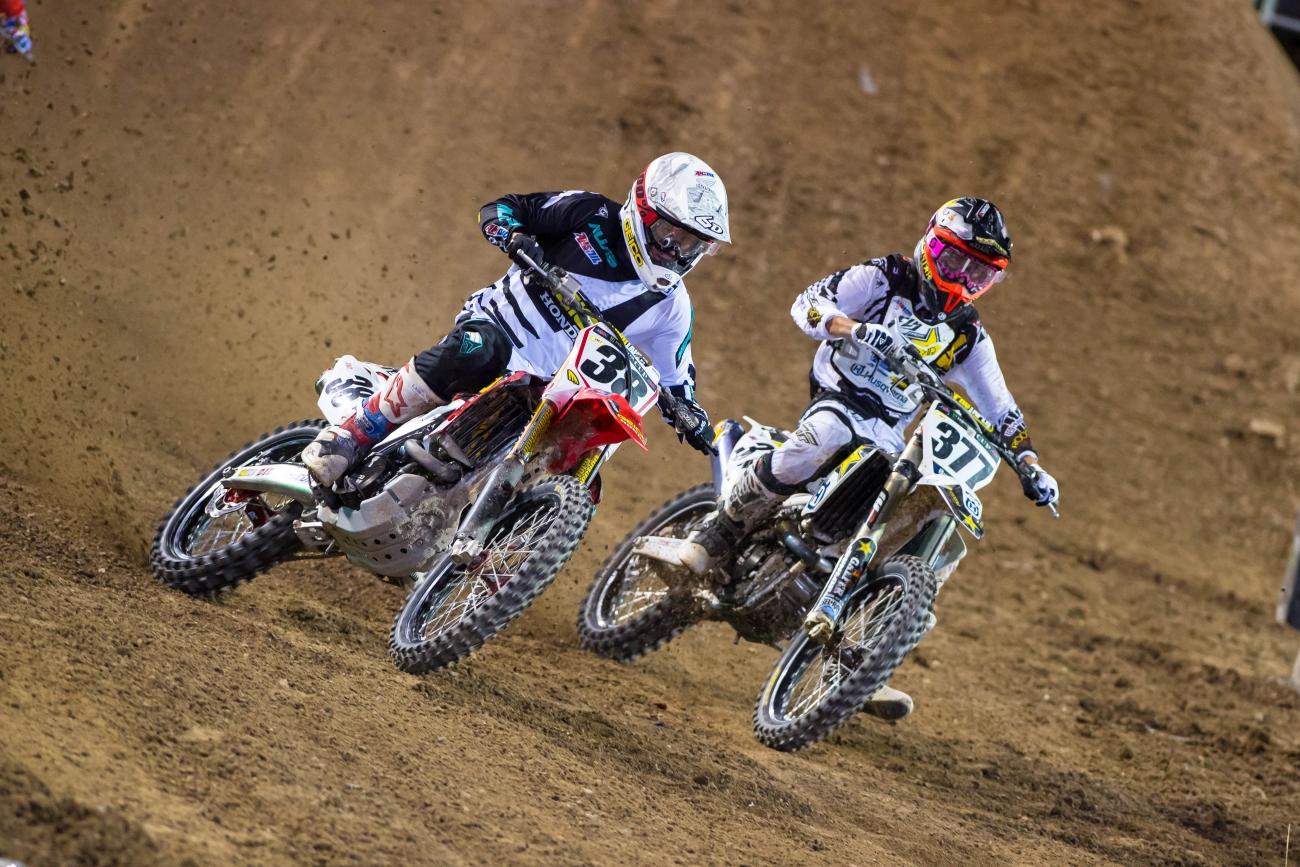 Winning the Monster Million is no easy task. Only once, with Ryan Villopoto in 2011, has a rider actually done it. Yet, if you asked most riders—excluding Mike Alessi, of course—they would probably say it’s harder to grab three consecutive holeshots and win a new Toyota Tundra. Jason Anderson surely thought so. "For me I think the odds of winning the million dollars were way better than me pulling of 3 holeshots," he wrote on Instagram after the race.

Before Anderson did so on Saturday night, no rider had claimed all three holeshots to win a new truck at this event. "Starts aren't usually my deal, so pulling three holeshots is kind of unheard of in my world, or even getting one," he said in press release following the race. And he's right. The Rockstar Energy Racing Husqvarna rider didn’t claim one main event holeshot in either Monster Energy Supercross or Lucas Oil Pro Motocross in 2015. The night may have been even better for Anderson had he not forgotten to take the Joker Lane in the first main event, costing him five positions (he finished sixth instead of first, although he only passed Ryan Dungey and Ken Roczen because he didn’t take the Joker Lane, while they did). Anderson went on to win the second main event and finish third in the final for a third-place overall finish. He even joked about missing Joker Lane after the race on Twitter: "You can add another dumbass to the missing the joker lane list! Haha #cassicmixup."

A year after nearly winning all three main events and one million dollars, Honda HRC’s Trey Canard was happy to escape Vegas on Saturday after a scary crash in the third main event when he landed at the bottom of the mechanics' tower. "I had a pretty good start in the last race, too, and was trying to make a pass on Jason Anderson, and I'm not sure if he broke traction or what, but his back end came over on the finish-line jump and his rear tire hit my front wheel," he said in a team statement. "I thought I was going to land on the tower—it was really scary." It was an up and down night all around for Canard, who led early in the first main event before losing the front end in the corner after the finish-line jump. Following a tenth in the first main, Canard bounced back to finish runner-up to Anderson in the second main event. Still, Canard was happy with his night, as he had the fastest lap time in two of three races (even the one where he crashed into the tower) and took the fastest qualifier award. "It was a tough day, but I’m really happy with how I was riding," he said. "It's always good to know you have the speed, especially coming back from injury."

Red Bull KTM's Dean Wilson sat out the final main event Saturday night after tangling with Red Bull KTM teammate Ryan Dungey down the start straight in the second main event. Wilson was down for a brief moment, but was able to get up under his own power and ride off. He wrote on Instagram that he "hit his head," which is why he decided not to race the final race: "I was feeling good for a top 5 last night but unfortunately made a mistake and hit my head a little and thought it was best to sit it out."

It was an uneventful return to supercross for Christophe Pourcel, who last raced in 2010 en route to a 250SX East Region title. Pourcel had some flashes, as he qualified third. But, in the first main, he went down after running into teammate Jason Anderson, which caused Justin Barcia to hit him. "It was a bunch of beginner mistakes, and when you put yourself in that position only to make those errors, it kind of sucks," he said in a press release. Pourcel, who will make his return full time to Monster Energy Supercross in 2016, said the hybrid MEC track didn’t fit his technical style. "This isn't the best race for me because it's fast and I'm more technical, but I think it was okay because it's not very dangerous, so it was still good for me to learn."

Rockstar Energy Racing Husqvarna teammates Zach Osborne and Martin Davalos came together in the first main event, which forced Davalos out for the remainder of the night. According to a team source, he got "checked out" yesterday. We will have more later this week. Osborne was able to continue and finish 11-11 in the final two races. "I had an unfortunate crash with Martin [Davalos] in the first main, and he ended up getting hurt," Osborne said in a team statement. "I'm a little bummed about that, but I took two elevenths in the other mains. I took some time off after the season and I'm just getting started again. I'm okay with how it went. I showed some flashes; the bike was superb and way better than anything we've had before. The 350 is very similar to my 250, which is good for me, so we can collect some data going into the season."

Osborne and Davalos weren't the only 250 riders making the jump to either a 350 or 450 for the weekend. GEICO Honda’s Christian Craig, Yamalube/Star Racing Yamaha's Aaron Plessinger, and Lucas Oil/Troy Lee Designs KTM's Shane McElrath all made the move to bigger bikes. Plessinger injured his foot in qualifying and was unable to race the LCQ. McElrath, meanwhile, finished third in the LCQ to make the main, where he finished fourteenth overall. Craig had the best day of the full-time 250 riders, finishing fifth in the final race to claim ninth overall. "The main goal of this race was to get a supercross event under my belt since I haven't raced SX for a couple years," he said in a team statement. "I'm pumped to be walking away with a ninth-place overall result. Being in the top ten against this level of talent after not racing SX competitively for a few years is pretty good. I'm pleased with this, and now I'm even more pumped up than before for January to get here so we can kick off 2016."

Sometimes u don't understand why things happen the way they do but it's part of life I guess , I'm blessed my foot is not broken but my thumb is I'm going under surgery to get it fixed so I can be ready for next year.

Monster Energy Kawasaki announced prior to the race that Wil Hahn would miss the race Saturday with an ankle injury. According to sources, Hahn sustained a broken ankle preparing for the event but should be ready for the Monster Energy Supercross season opener.

How about Ken Roczen winning the race but only having the fourth-best time? Impressive for Blake Baggett, who was solid but not a speed demon throughout 2015, to be second-fastest in this one. Anderson was obviously fast all night; however, take his average lap time here with a grain of salt—he never took the Joker Lane.

Canard was fastest in qualifying, crashed while leading the first race, then logged the fastest time while charging through the pack for second in this one. He was on it all night. Dean Wilson, by the way, was quick here but crashed out while fighting for a top five.

Canard again! No wonder he told Matthes after the race that he had good speed.

Forkner dominated this one, but Sexton had the faster time while battling his way to second. That gave some hope for a big battle between them in race two.

That battle didn't materialize because Forkner was faster earlier. He pulled the holeshot and then did a 1:09 and a 1:08, while Sexton was quickly in second and logged a 1:10 and a 1:09. Sexton matched him for the rest of the race.

Lance Kobusch was in a world of his own in this one.

Mullennix came through the first lap in sixth and worked his way to fourth with this lap time.

Despite not having a rider in the Cup Class, Kawasaki was well represented in the Amateur All-Stars and Supermini Classes. Team Green teammates, Austin Forkner (Amateur All-Stars) and Lance Kobusch (Supermini), both from Missouri, won their respective classes on Saturday. For Forkner, who is expected to make his pro debut at Hangtown in 2016, it was his sixth straight race win at the event (he swept the Supermini Class in 2012 and 2013.)

"After setting the fastest time in qualifying by over a second, I felt very confident leading into the races," Forkner said in a team statement. "My Monster Energy Kawasaki got me off to two great starts, which made my job easier, and I never looked back from the gate drop to the checkered flag and was able to get both wins to remain undefeated."