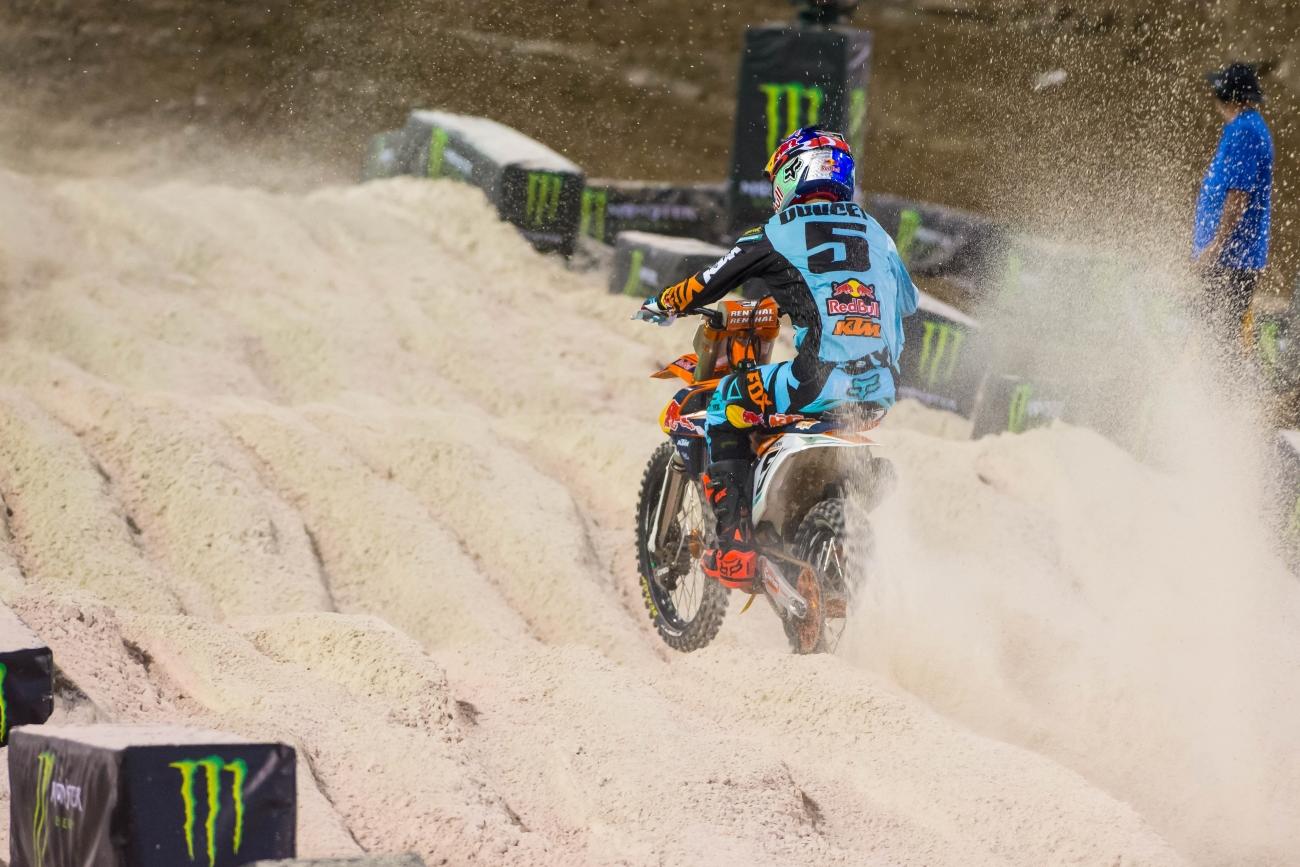 Breakdown What Did I Learn?

After five months away from supercross, it was interesting to get back inside a stadium even if it was the exact same stadium we were in the last go-round. A lot of things have changed since then, but many things have remained constant. In any case, I learned a few things from this year's Monster Energy Cup.

Ken Roczen showed the form that we saw from him in early 2015. Remember the lightning-fast K-Roc from Anaheim that ran away with the win? Well, that was the Kenny of this past weekend. He made moves to the front all night and had no trouble winning the first and third main events. There was a lot of buzz about his switch to KYB forks on his Suzuki, and my general opinion on topics like this is that riders should use whatever setting or component will make them happy. There is no bigger advantage a rider can gain than confidence.

Ryan Dungey was very good, but he made some uncharacteristic mistakes that cost him. With the timing of the Monster Energy Cup and his Aldon Baker-mandated time off the bike, Ryan showed up a little less polished than usual. He took somewhere around three weeks to a month off the bike, surely the most he has taken off sans injury. While he was still easily a podium-level rider on the night, he wasn't the picture perfect machine that we saw January through August of this year. The reason is simple: to achieve that level of performance, Ryan needs to prepare in a very precise and calculated manner. Taking time off just rounds the edges, so to speak, off the razor-sharp blade it takes to win. As Ryan said in his post-race interview, though, this event is fun, but the real racing begins in January, and that's where his focus is.

Jason Anderson was the surprise of the night (according to the Racer X poll, anyway). His three holeshots won him a brand-new Toyota Tundra (which Stilez Robertson smacked into in the Supermini race). Had he remembered to take the Joker Lane in the first race, he may have been your MEC champ as well. As surprising as this was, it may shed more light on the new Husky model than Anderson. That was his first supercross on the smaller, lighter model, and the difference was clear. His starts were immaculate and his pace was right on point to win. He is Husqvarna's hope for the future, and with rides like that, the future looks bright for the bikes in white.

Trey Canard is still fast…really fast. Unfortunately for Trey, he made mistakes that cost him a chance at the win for the second year in a row. Having the fastest qualifying lap, it was clear he would be in the mix, and when he jumped out to the lead on lap one of race one, I would be lying if I didn’t have him already pegged for the win. His front tire slid in the mud on that treacherous first lap, costing him dearly. His speed served notice that he was back on form, though, and will be dangerous again in 2016.

Austin Forkner is undefeated at the Monster Energy Cup. I was a bit concerned about his streak this year, as Chase Sexton figured to be strong aboard his new GEICO Honda. That concern proved to be baseless, as Forkner proved once again that he is a force inside the confines of Sam Boyd Stadium. His lap times in practice were good enough to qualify him for the Cup Class, ahead of riders like Andrew Short and Martin Davalos. He is going to be very good in supercross in 2017, and there are sponsors signing deals with Mitch Payton's team for that exact reason.

Chad Reed's results aren't all that spectacular on paper, but his riding was actually pretty decent. I know, I know—you're only as good as your results, but I'm telling you, he rode well. His starts, however, were terrible. The MEC is all about starts, and without them, you end up explaining (or I do) how the riding didn't match the result. Chad is working day and night to finalize a deal that will see him on a Yamaha in the fast-approaching supercross series.

The track itself was okay overall, but I really think it could have been better. I know they are dealing with a format that has supermini riders, amateur riders, and also professionals. That's a tough combo to suit for everyone. When watching the racing, though, there is no denying that the track looks narrow. I have seen bills pass through Congress with less trouble than making a pass in some sections of that track. Building a track with no whoops is also not my favorite concept, but I realize they are trying to lure MXGP riders (which hasn't happened) and also keep it safe for the younger riders. Whoops just always add unpredictability and passing, something the MEC needs.

Having three races where all of the superstars are racing is a positive. The standard supercross structure is fine, but many times a fan's favorite rider gets a bad start or tips over and then their evening is over. Having three chances gives spectators more value for their ticket and also adds to the experience. I wouldn't be opposed to adding a MEC-style format to multiple rounds of Monster Energy Supercross starting in 2016. That probably won't happen anytime soon, but if anyone wants my worthless approval, there it is.

Davi Millsaps was a factor in his supercross debut on the BTOsports.com KTM. He was a strong third in the first main event and rode on the lead pace in each race. He's in a good place mentally for the first time in a while, and as we all know, a happy rider is a fast rider. For Davi, it was a huge confidence booster after a rough and tumble 2015 season. If he can come into 2016 prepared and healthy, he'll turn some heads once again, just as he did in 2013.

Those are some of the things that jumped out at me over the weekend. As I have learned, though, these off-season races should be taken lightly. Riders are generally less prepared than normal, and many are going through bike and team transitions. Still, it is interesting to see changes in progress and add a bit of flair to a generally quiet time on the calendar.

As we leave this event, the hard work is about to begin. For riders like Ryan Dungey and Weston Peick, who both took lots of time off before coming to Vegas, their next two months will be hellacious days of training and riding. November 1 marks the beginning of "boot camp" for many of the sport's elite riders. Their whole lives will consist of gym sessions, three-hour bicycle rides, and endless supercross laps. It's the most grueling part of the year, and one I always dreaded, but also realized the importance of.

I hope all of you riders had fun this past weekend because the fun is officially about to end.