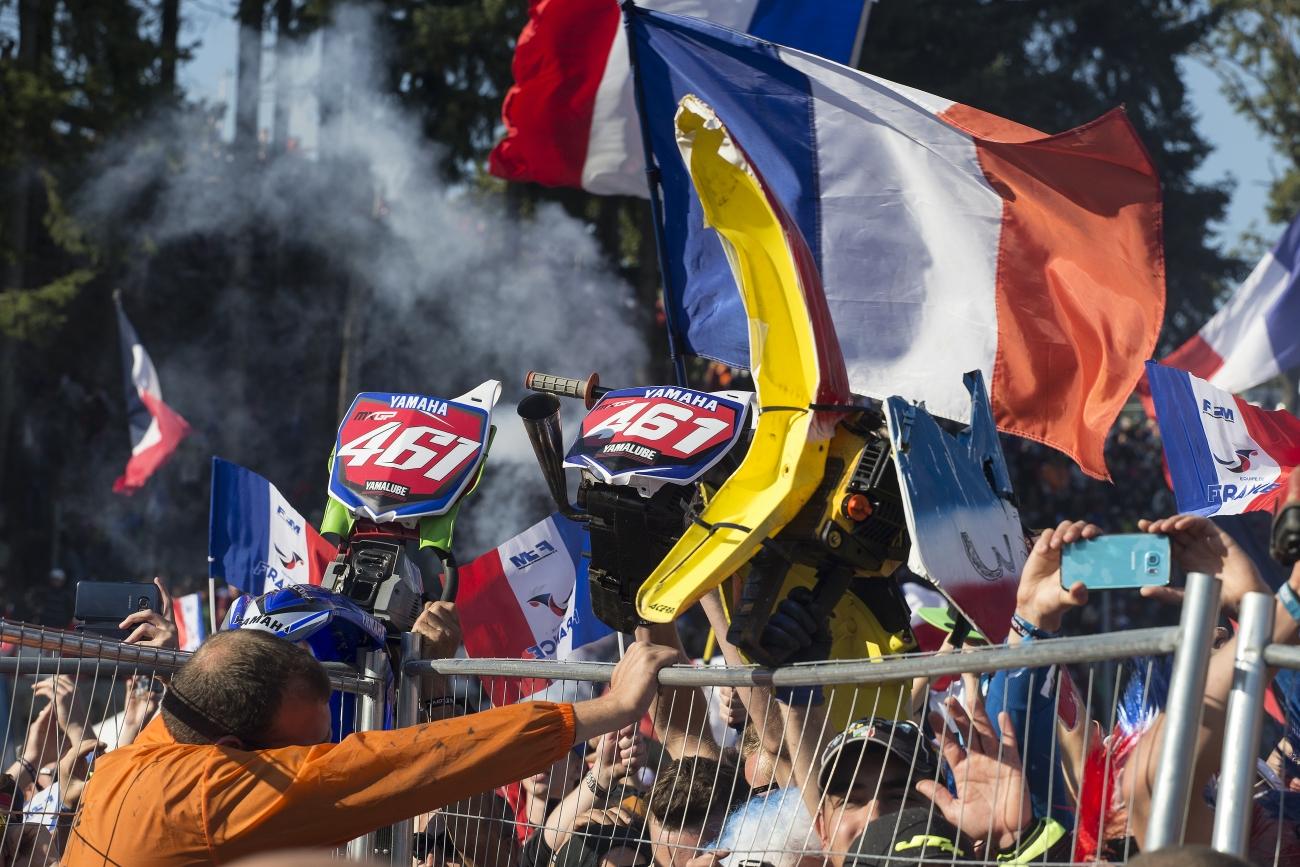 How Much Does It Cost to Go Racing?

Racing is expensive. This much is pretty obvious. Travel, bikes, salaries, parts, etc. quickly drop your profit margin into the red. Compared to other forms of motorsports racing, motocross and supercross are quite cheap. Jalopnik recently received unprecedented access to a team in the Prototype Challenge class of IMSA’s Tudor United Sports Car Championship and found out that it costs $150,000 for one race! Earlier this week, Pulpmx got former team owner Alan Brown to draw out the details on how you would spend 1 million on a budget. There were two caveats: the budget was for a two-rider 450 team that would race both Monster Energy Supercross and Lucas Oil Pro Motocross, and the riders would have to be consistent main-event guys. Check out the hypothetical budget that Moser came up with below.

When I first read this, I thought he would be kind of close to the cost—then I read Alan's response. Check it out for yourself on Pulp.

James "Bubba" Stewart is back, people. Following a sixteen-month retroactive suspension handed down by the FIM last December, Bubba will return this weekend at the second-annual Red Bull Straight Rhythm event—the last race we saw him in, which he won. While RBSR and the upcoming Monster Energy Cup are great and all, they have no bearing on 2016. Brett Smith, contributor for Racer X Illustrated, among other publications, laid out a great piece at Revzilla on what challenges Stewart faces heading into 2016—one being his age. According to Smith, no rider in the history of AMA Supercross has ever won a title in the premier class after turning 30. Stewart turns 30 this December. Moreover, only four riders have won a single main event after 30—Mike LaRocco, Chad Reed, John Dowd, and Kevin Windham. More from Smith:

Based on history, the Floridian faces two big hurdles: the long layoff and his age. No rider has ever taken an entire 365 days (or more) away from racing and won a championship. On Dec. 21, Stewart turns 30. No rider has won a Supercross title in the premier class after turning 30.

Go check out the entire article on Revzilla; it’s worth the read.

Seriously, How Did This Happen?

I'm still kind of baffled by this crash. This past weekend at the World Superbike Championship in France, Gino Rea entered a corner in qualifying when either the front brake locked or he applied too much front brake—either way, it was one gnarly crash—and went flipping head first into the ground. Luckily Rea was okay and went on to finish seventh in the SuperSport class the following day.

Remember a couple weeks ago when we told you about a report from Vice News that said Anheuser-Busch InBev, which includes Budweiser, Corona, and Stella Artois, is looking to acquire SABMiller, which includes Coors, Fosters, and Miller? Well, about that.... Apparently the deal has run into a snafu—$104 billion ain't good enough! Per Mashable, SABMiller rejected Anheuser-Busch InBev's offer of $104 billion earlier this week, saying it "still very substantially undervalues" the company and "its unique and unmatched footprint, and its standalone prospects." Damn! But…the deal may still happen.

Plans for the merger may be temporarily on ice, but analysts have been generally optimistic that it will go forward, despite the bidding hiccups.

"Although there are a number of potential loose ends and the recently appointed [SABMiller] heavyweight chairman, Jan du Plessis, is likely to put up a strong bid defence, we see no obvious white knight or poison pill that might prevent the deal from taking place," analysts with Nomura wrote in a research note last week.

$104 billion may not have been enough, but at least the guy has a cool title like heavyweight chairman. Read more about the deal here.

Quick, what would you do with this thing barreling down on you?

Yeah, running probably isn't a good idea. If you’re Chase Dellwo and a 350–400-pound grizzly bear is coming after you, you just stick your arm down his throat. Yep, that's it.

From The Great Falls Tribune:

The bear knocked Dellwo off his feet and bit down on the top and back of his head.

"He let go, but he was still on top of me roaring the loudest roar I have ever heard," Dellwo said.

The bear left and Dellwo managed to sit up.

"He came back and bit my lower right leg and gave it a pretty good shake and threw me a ways," he said.

The bear came after him again.

"I remembered an article that my grandmother gave me a long time ago that said large animals have bad gag reflexes," Dellwo said. "So I shoved my right arm down his throat."

It worked. The bear left.

Turn Down for What!

Last week, Lanesplitter ranked their top moto Instagram accounts of the week and there was one name you might recognize—FMX star and Moto-Gate founder Lance Coury. If you don't follow Coury on Insta (@lancecoury), you probably should—he posts some pretty cool stuff, and not just your typical at the track, training, inspirational quote photos. Check out a few below.

When these guys got done talking Navy Seal Team stories or lifting 300+ lbs at the gym I had to show off some how, Wheelies it was. Haha. I had a great time covering 2300 miles over 6 states and camping every night. Thank you @thedavecastro for the invite along with @bridgesj3 @dan_bailey9 @richfroning @jameshobart @cfmediajordan @tysonold & @timchansd for the great time! I can't wait for the next trip. #cfmototour2015 PC @tysonold

Need fresh goggles, gloves, anything Moto related? MotocrossGIANT.com is offering FREE SHIPPING to all orders over $49

What are your favorite moto accounts to follow and why? Let us know below.

You're out for a nice ride on your paddle board, taking in the scenes, getting your relaxation on when a pair of giant whales happen to get all up in your space. Luckily for this guy, in Esperance in Western Australia, the whales seem to be pretty chill.

So, some guys in Sweden decided to drop 225 horsepower into a 1956 Volvo BM Terrier tractor and film a Tokyo Drift session on their GoPros and, well…. It's glorious.

"It is exciting that skateboarding could possibly be included in the Olympics," he told TIME. "This is not only a great opportunity for our sport and the skaters, but also for the Games. It is now more important than ever to preserve the unique culture of skateboarding which makes our sport so appealing and relevant."

The Dakar Rally, a fifteen-day, 6,200-mile race through the desert, is one of the toughest, most demanding races in the entire world. From its first year in 1978 through 2007, the Dakar ran from Paris, France, to Dakar, Senegal. In 2008, the event was cancelled due to what The Guardian said was a "threat of terrorism" in Mauritania. The event continued in 2009, but moved to South America, where it is still held today. Recently, filmmaker Simon Lee documented Christophe Barriere-Varju's attempt to complete the Dakar Rally in the film The Dream Racer. Last week, the film won Best Feature Film Award at the 2015 Motorcycle Film Festival in New York.

"I wanted to make a film to show that anyone with a dream can actually make it come true; in my case it was competing in the Dakar Rally. Simon Lee [director] and Adrian Barac [editor] have done a fantastic job at capturing the core elements of a totally non-scripted adventure and has turned Dream Racer into a timeless story that will stand the test of time and inspire young and old for the next several decades. To be awarded Best Feature Film in New York is a great honor and I truly hope Dream Racer has inspired ordinary people, like myself, in doing extraordinary things with their life and be able to say at the end, 'Yes, I am happy of having lived such a life,'" says Christophe Barriere-Varju (subject of the film).

Check out the trailer for the film below. Dream Racer is also available worldwide on DVD, Blu-Ray, and Video-on-Demand at www.dreamracer.tv.

Only in Florida would a dude whip out his phone during a high-speed chase to send a text message. Thoughts on what the message was?

Yeah, the Ferrari didn't stand a chance. Per Esquire, the guy dusting the Ferrari 430 Scuderia is Switzerland's Francois Gissy. Gissy apparently recorded 3.1 gs of inline acceleration on his way to a top speed of 207 mph, according to the article. Yeah, he wasn't the guy driving the Ferrari; he was the guy on the bike! Check out more here.