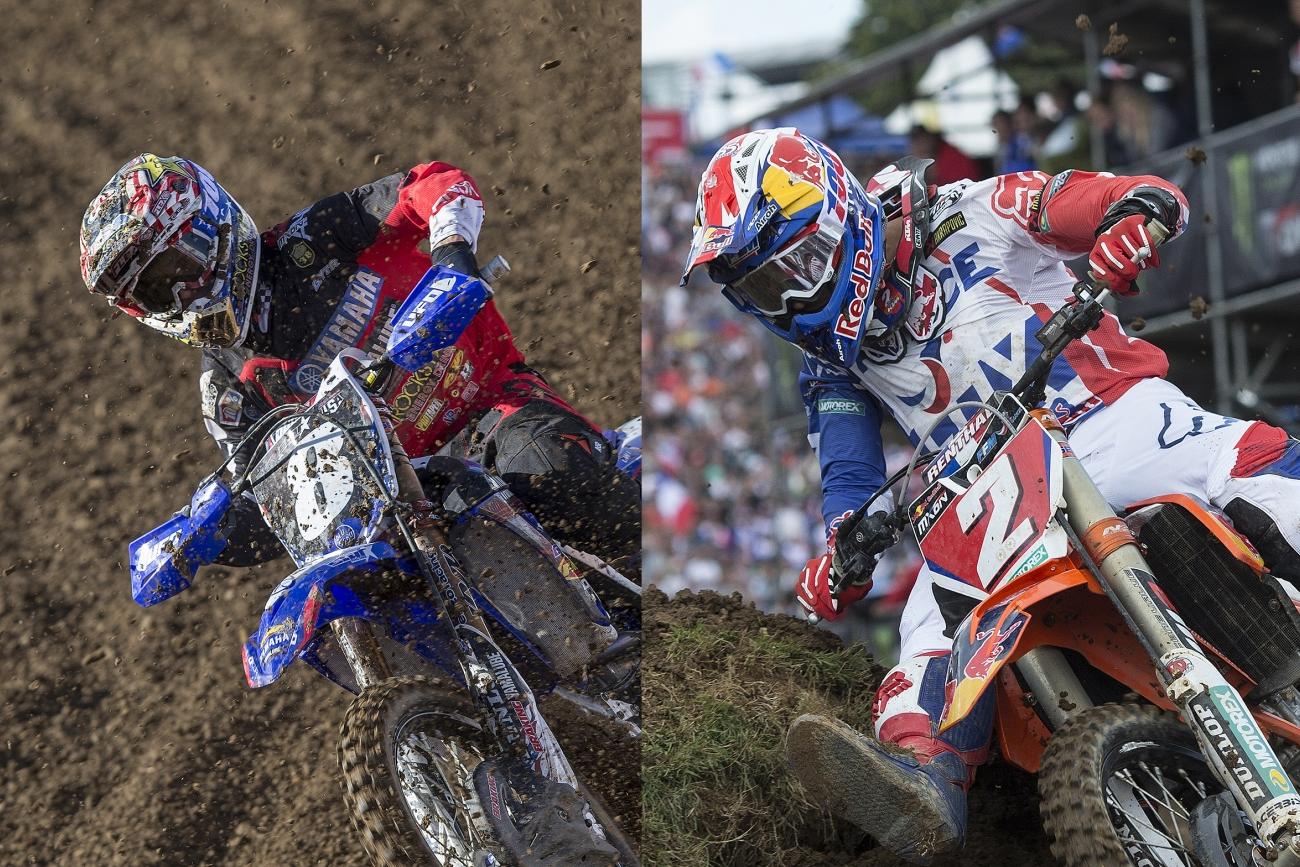 Rivalries in this sport take on different forms, but we always gravitate toward the ones with heat. Sprinkle personality conflict on top of actual racing battles and you’ve got unforgettable stuff. While Marvin Musquin and Jeremy Martin battled through every inch of Monster Energy Supercross 250SX East Region, 250 Lucas Oil Pro Motocross, and the MX2 class at the Monster Energy FIM Motocross of Nations, they showed respect through all. We never saw a fight, never heard any trash talk, and never saw anyone try to take anyone out. Because of that, we might not think of it as a rivalry in the way of James Stewart and Chad Reed, or even in what Cooper Webb was building with Musquin through the final few nationals. But Martin versus Marvin was significant, because rarely are two riders so close through so many races, indoors and out, and all the way over to Europe.

It's rare we can find a season where two riders shadow each other so consistently. The closest we can find is 2000, when Stephane Roncada and Travis Pastrana locked horns for all three of those titles—125 East Region SX (won by Roncada, with Pastrana 8 points behind in third, and Brock Sellards splitting them), 125 Nationals (won by Pastrana by 2 points), and the des Nations (Pastrana and Team USA came out on top of Roncada's French team in France). In 2000, Pastrana and Roncada grew close, and even wore each other's stickers on their chest protectors. The personalities of Pastrana and Roncada had a way of disarming any feuds.

The personalities defined this one, too. Marvin and Martin found each other again in France at the des Nations, and they were close at times, they battled, and they showed respect. No doubt Musquin was the better man on the weekend, and Martin could only tip his visor to him.

In Saturday's qualifier, they started and finished 1-2. In Sunday’s first moto, Musquin was logging an incredible ride, actually battling Justin Barcia's 450 for the lead, until he crashed. By the time he got up and going, his old rival Martin was there to try to make the pass. They'd found each other again. In the second moto, Martin got the jump on Marvin and had the better start, but they found themselves in the center of a four-way battle, with Great Britain’s Dean Wilson and Belgium’s Jeremy Van Horebeek in the mix. Musquin rode amazing again, passing all three riders to finish the moto in third, with Martin fifth. France went on the win the event. But consider how strong these two were: Musquin went 4-3, Martin 5-5, and the next-best MX2 rider was Switzerland’s Jeremy Seewer, five positions back with 10-10 moto scores.

"I figured Marvin must have been up there up front [in the first moto]," Martin told our Steve Matthes. "I heard some French chainsaws going off, just a few. I was like, 'He must be up there battling.' I was, I think, nineteenth on the first lap, and I was just working my way forward, kept charging. I really struggled with the track. It was a lot different than what's in the States. So I was constantly fighting everything every lap I was out there, but I just knew I had to give it everything I had. When I got in behind Marvin when he went down—we've battled many times together in the States this year, and he was on another level. He was really on it this year. So was the rest of Team France."

Martin, ever the nice guy, even threw out some respect to Marvin's situation with his brother Mickael, who broke his neck in a crash a month ago. Marvin and Jeremy even have the racing brothers thing in common.

Of course we’ll forever wonder what would have happened in the final moto of the Ironman National in Indiana, where Musquin's bike broke before the duo had a chance to battle for the title. We can only assume, though, that whatever happened, the two would have shaken hands and showed respect when it was over.

"Yeah, I can walk away…. Obviously I want to win and we’re bummed," Martin said. "We want to make everyone back home proud. But we did everything we could."