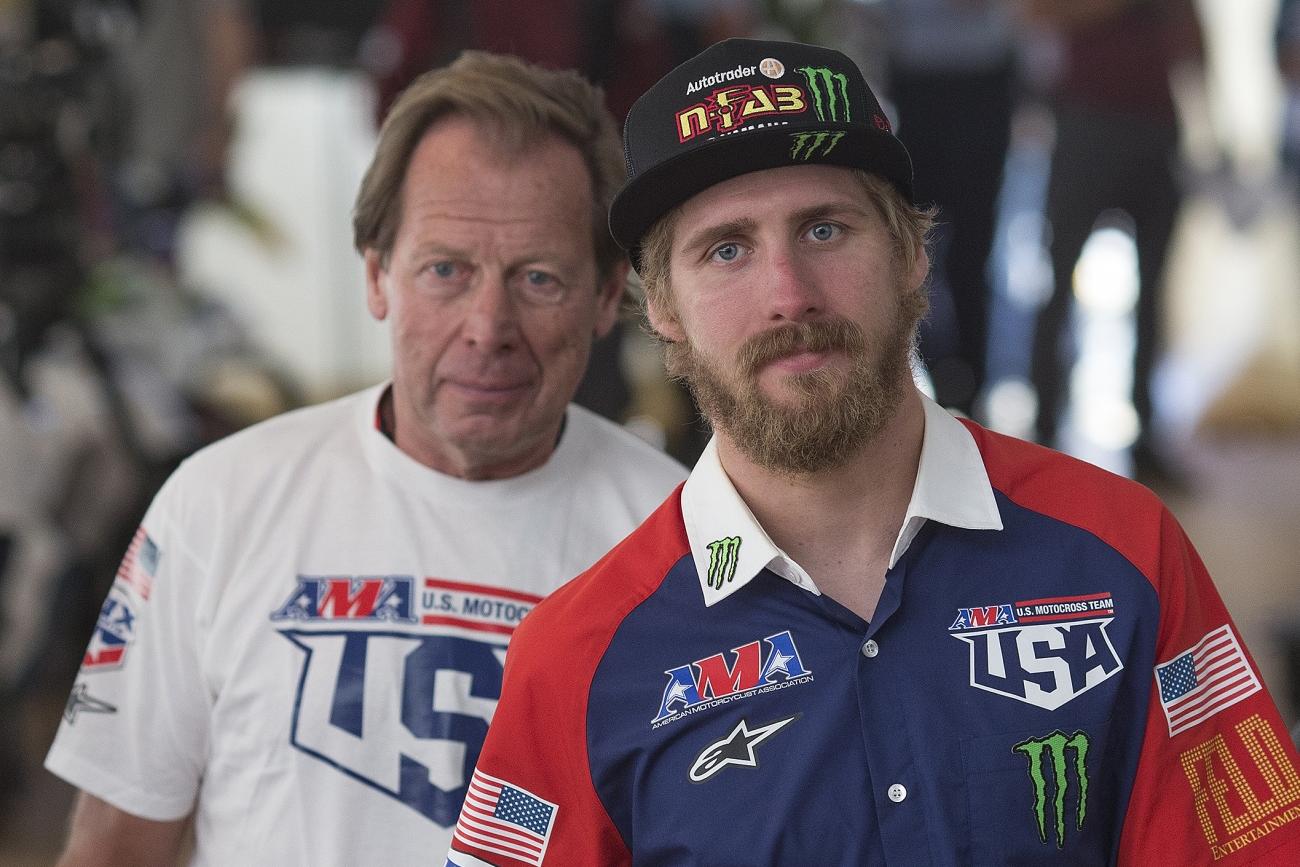 Unfortunately for him, Justin Barcia has now been to the FIM Monster Energy Motocross of Nations three times for Team USA, but has yet to win. That’s especially tough because he’s brought it each time, and you could argue that he was the strongest rider on the team in all three of his appearances (2012, 2013, and 2015).

This year, Barcia won America’s first moto since 2011, and charged from outside the top ten to third in the final race, trying to pull out a victory. He gave it one heck of an effort. The Autotrader.com/Toyota/N-Fab Yamaha rider talked about it in the press conference and again to our Steve Matthes.

FIM Press Conference: Justin Barcia, you put in some great performances today. You showed that you are all heart this weekend. Your battle with Marvin Musquin had everybody on the edge of their seats and on their toes out there in the crowd. What was it like to be a part of that race in that kind of atmosphere?
Justin Barcia: It was awesome. That’s my favorite type of racing—aggressive racing. I think it was pretty clean. I like Marvin; he’s a great person. It was a fun race. I’m glad we could do that together. We hadn’t really raced each other before; it was fun. It was a challenging weekend for sure. I always come to this race with 100 percent heart—never give up. It was fun, but we came up a little short. France did a great job.

The first race, you got the first holeshot and made it a lot easier for yourself, but in the next race, when everything was on the line, you messed your start up. What was the problem there? Was it your start position or just a bad jump?
Just a bad jump, unfortunately. Maybe things would be a little different if I would have gotten a better start. I would have liked to race with Romain [Febvre] and everyone up front, but just had to make a hard charge. Caught up toward the end, but the race was over by then, so definitely had to charge hard. The track was, I think, very fun. It took me a while to get warmed up through the weekend and get used to the track. The guys from France ride this stuff really good. They stand up a lot and move around, and the traction was challenging. So I had to learn it all this weekend, but all in all really proud of the whole team. I wish we could have won, but we did our best and we’re going home knowing that we never gave up.

You won the MXGP class as well. Some kind of consolation I guess.
Yeah, I guess. But it’s good to win that for sure. It’s nice, and congratulations to all the teams up here. Thanks a lot.

Nice evaluation of the track. Was it harder to deal with than you thought? Some of the guys are saying it’s pretty tight, but also technical.
It was a challenging track. Everyone kind of said it was going to be really gnarly. I thought it wasn’t as bad as everyone made it to be. It definitely was a learning curve for me. Roger [DeCoster, team manager] actually said it was going to kind of be like supercross passing; I was confused at first. But then, as I raced, it’s really tight, so you had to make supercross passes. So it was challenging. The lines were really strange compared to U.S. The U.S. tracks are really flowing and fast, and this was a lot of stop and go. On this type of track you can’t over-ride the bike, and I’ve been known to over-ride the 450 a little, so I had to kind of shift up a gear and just roll around pretty much, pick the right lines, and stuff.

Obviously the French took a lot from the crowd. In two years it’s going to be held at Glen Helen. Do you think you can get a similar effect from the fans at home?
It’s unbelievable, the fans here. When I was behind Marvin, I could hear all the cheering, and when I came around in front of him, I didn’t hear anything. They kill it for sure. But it would be nice to have one of these races in the U.S. I’m sure the fans would be pumped up.

Steve Matthes/Racer X: You rode great. A ton of heart. Is there any satisfaction that you rode great, or does it just suck because you lost?
You know how it is. I always come here and ride with 100 percent heart no matter what and never give up. I was happy with my riding for sure; only thing I would have liked to fix was my start in the second moto. I felt like me and the team worked good. We made changes today, and the bike was absolutely awesome; legitimately it was really good. We made great changes. A little motor change, and a little suspension, and my bike was awesome. So I was pumped on that. I felt like I could pretty much charge as hard as I want. Satisfaction, I won the overall in my class, but that doesn’t really matter because I was here for a goal and that’s to win, but France was really good.

Third moto, like you said, you didn’t get the start. You worked hard. But about mid-moto, I don’t know what happened, Cooper got you, and you snapped out of whatever it was and then you got on it. What was the deal there for a few laps mid-moto?
The beginning, I was just a little tight and trying to pick lines and do the right things. I knew Cooper [Webb] was behind me, and I felt like he was faster than me, so I checked up one of the hills and let him by, and I was just going to trail him. Then, unfortunately, he stalled, and that’s when I somehow kicked into gear and started hammering down more.

Gate selection—what was your thought on that? I think you had the outside gate in moto one and still pulled a holie. It almost didn’t matter much, huh?
Yeah, gate position didn’t matter much, but as the team leader I think I took the second gate pick every time. So I wasn’t too worried about where I was on the start. Just the second start, I had a bad jump and kind of blew it for myself. I had to put in a lot of work to get back up to where I could.

It was a tough track to pass on. Talking to the GP guys that come here all the time, they were like, "The start is everything." You can pass at the bottom of the hill; you can pass by the mechanics area. So right away off the third start you were probably like, "Uh oh."
I knew it was going to be tough. Roger said at the beginning of the weekend it’s like a supercross track, and I was a little confused with that, but then once I rode it and saw how you have to pass, it’s like supercross passing. The track was challenging. I can’t say I didn’t enjoy it because I had fun riding the track. With my bike setup and the way I was riding, I was able to move around, follow Marvin a little bit in that first moto, pick up on some of his sick Euro lines. I did have a good time, but it’s definitely frustrating coming up short.

I saw two turns where you found some things where Marvin got by you.
Yeah, I found a lot of things when Marvin came by. He had some good lines. I put the good lines I had together, then I put his lines together and I was like, "Boom, this is good." My bike settings, I wish I had in the U.S. What I had here because I feel like I made a lot of great progress the last few weeks after Indiana. I was testing a lot, pretty much non-stop during the week with Jonny [Oler, JGR suspension tech] and all the guys. We got the bike good.

I was worried about you revving the sh-t out of this because you had to shift up….
I was worried about the revving and stuff. I rode fairly good in the beginning of the first day. I looked at the data. Dean [Baker, JGR engine tech] showed me everything, and I knew I needed to shift up. I rode good in the heat race, but not great. I just shifted up and Roger said, "You can’t over-ride your bike here; you won’t win." And I agree with that 100 percent. So I shifted up. You’ve kind of got to almost cruise in certain places.

Is this the best feeling you’ve had after a race, after the Team USA appearances?
Yeah, I feel like Roger picked the best team to come over here. We did the best we could. I wouldn’t say I feel good about it. I think we could have done a few things a little better here and there, but all in all I know that Cooper and Jeremy [Martin] tried their hardest and that’s all we can ask. I tried my hardest, too.

I just knew he hated coming over here, so I knew there had to be some funny stories.
He did say the best part of coming here was the Alpinestars hospitality rig with the food.

You’re not happy you didn’t win, but you rode terrific, you rode really great—impressive. One of these years you’ll be on top.
Yeah, hopefully be on top one of these years for sure. I definitely try my hardest. Congratulations to France. They did a great job. We’ll be back for more.