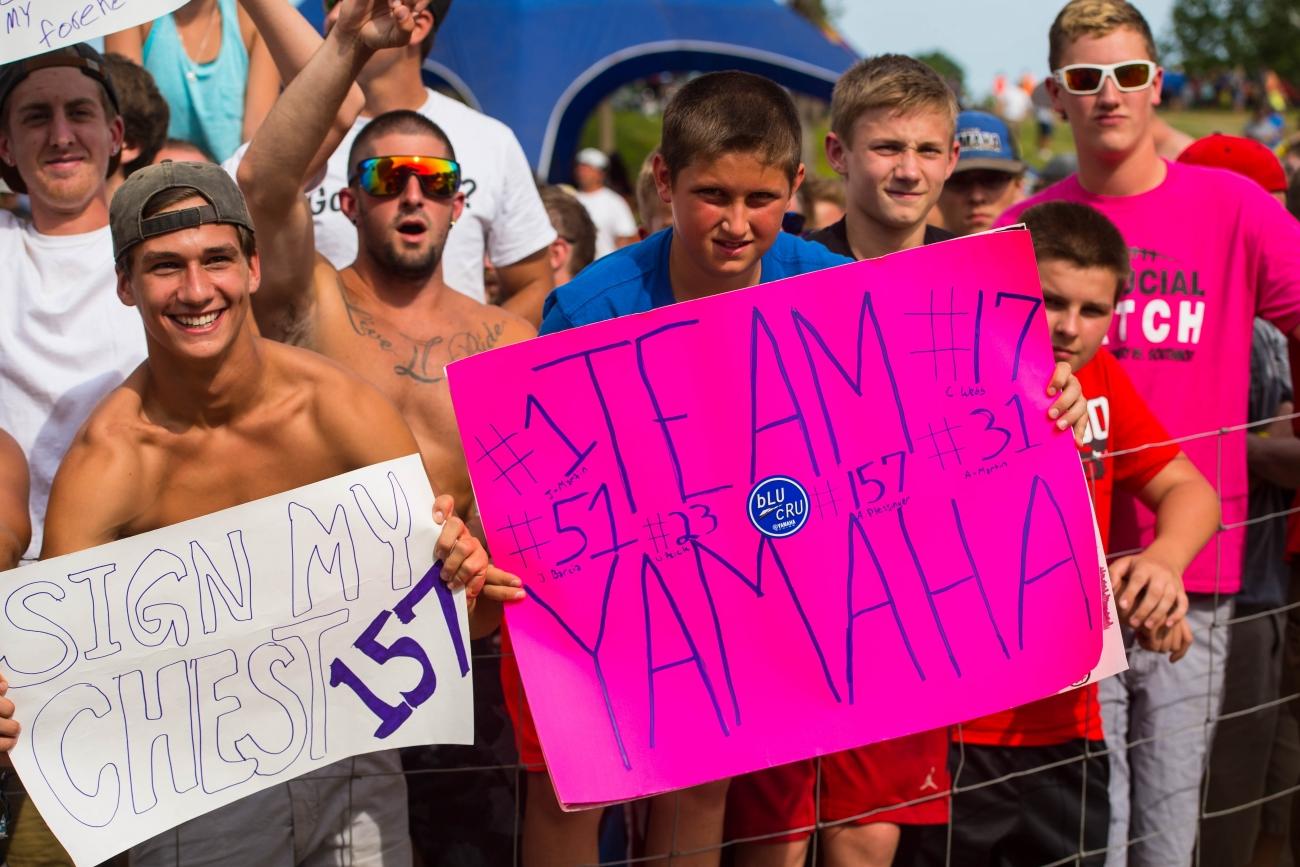 Remember Supermoto? The hybrid love-child of road racing and motocross? The sport that had its own series and a prominent spot on ESPN and the X Games? Where our own David Pingree competed for a number of years? Nothing??!! For you younger bucks, Supermoto used to be a hip thing for a few years—TLD had a full-on factory team and all—and was growing in popularity before it kind of just….stopped. Supermoto is still very much a thing in Europe, though, and we found a link to Lane Splitter of a Supermoto track in Bulgaria that is made entirely of asphalt—the jumps and everything. Apparently this track hosts the FIM Supermoto of Nations from time to time. Anyway, it looks pretty awesome.

Red Bull KTM’s Ryan Dungey visited the ESPN campus in Bristol, CT, yesterday for a guest appearance on SportsCenter (which aired yesterday on ESPN News and can watch here) and to film a special segment with SportsCenter anchor Lindsey Czarniak that will air tonight on SportsCenter at 6 pm EST on ESPN. I watched Dungey’s appearance yesterday and while you could tell he was a bit nervous, I thought he did a wonderful job representing our sport. Make sure to catch the special segment tonight—we hear it involves Dungey riding around the ESPN campus—and check out some of his day below.

When you win every major American Motocross and Supercross title, you get one of these. #ESPYS

It was a fun day @ESPN campus touring and meeting good people! Also got to ride my @ktmusa 450 all over campus filming a segment for @sportscenter to bring anchor @lindsaycz her cup of coffee, check out more tomorrow at 6pm!

@ryandungey with his @redbull KTM on @espn campus. Dungey will be on the ESPN News 3-6pm ET broadcast of @sportscenter. #ProMotocross #ThisIsMoto

Make sure to watch the 6 pm EST edition of SportsCenter tonight on ESPN for a special segment with Red Bull KTM’s Ryan Dungey and SportsCenter broadcaster Lindsey Czarniak (@lindsaycz). We won’t reveal the entire segment, but we hear it includes Dungey riding all over the ESPN campus. @promotocross #ThisIsMoto #motocross @redbull @ryandungey @ktmusa @foxracing

The Isle of Man, located in the middle of the Irish Sea, hosts world famous, yet very dangerous, TT races. But the TT races are only held during one week a year; the other fifty-one weeks the island is home to public roads without speed limits—the only place in Europe outside the German Autobahn that is speed limitless. Esquire-owned Car and Driver magazine recently profiled the man in charge of keeping order on the roads. A small piece of the profile ran on Esquire, and it’s quite interesting.

It's proactive policing, to the extent that Thomson or one of his teams will meet up with visiting groups of bikers or supercar owners when they arrive on the island.

"We make sure they have a point of contact," he says, "and then it's about painting a picture of the hazards over here, getting across that these are public roads. If you hurt somebody, you are liable for it, regardless of whether there are any speed limits or not. But we want people to come over here and enjoy themselves."

Not that this soft approach works for everyone, with considerable emphasis still put on enforcement against poor driving or riding. The IoM Constabulary has several high-speed interceptors, including a Focus ST wagon that Thomson meets us in. "You definitely need a car that you can make ground in," he says, "but you'll never be as fast as some of the bikes—you can be driving at 100 mph with the lights and sirens on and there will be bikers whistling past you."

Check out the entire piece here.

If you live in a city that houses a professional football team, you’re shelling out a lot of money to pay for the nice stadium downtown, says the Huffington Post. (Shhh. Don’t tell Weege—he may sell his house and move away from Charlotte.) This isn’t really breaking news—teams typically float the idea that “they’re moving (wink, wink),” and receive considerable tax breaks when they stay and build a new stadium. But the amount tax payers are paying is kind of staggering. More from Huffington Post.

All told, 29 of the NFL's 31 stadiums have received public funds for construction or renovation. In the last two decades, the analysis found, taxpayers across the country have spent nearly $7 billion on stadiums for a league that surpassed $10 billion in revenue last season.

"Unfortunately, beneath all of the glitz and glamour, these venues are nothing more than monuments to corporate welfare and taxpayer handouts," David Williams, president of the Taxpayers Protection Alliance, said in a press release. "These stadiums have been built on the backs of taxpayers who had no or little say in the matter and in many cases have benefitted little or not at all.”

The report provides a team-by-team breakdown of the “staggering” costs: $444 million to the Dallas Cowboys; more than $600 million for the Indianapolis Colts; and $424 million for the Cincinnati Bengals, in a city that later had to sell a public hospital to close budget holes.

Due in part to the size of its stadiums, no league relies more heavily on public subsidies than the NFL. Taxpayers contributed an average of $262 million to each NFL stadium built between 1990 and 2010, urban planner Judith Grant Long found in 2013, about $60 million more than the average MLB stadium received.

There is no complete accounting for the costs of stadiums to taxpayers, but the $7 billion figure is an accurate ballpark estimate, multiple stadium experts told The Huffington Post.

You can read more here. [Wait, here's a note from Weege: Last year Charlotte spent $100 million upgrading Bank of America Stadium. And still no supercross! I want my tax money back!!! - Ed.]

The music industry has changed. Unless your name is Taylor Swift, not many artists sell a ton of albums. Due to streaming services like Spotify, Pandora, YouTube, etc., artists have to look to other avenues for making money. Vulture recently looked at how exactly artists do it. Check out a small sample below and check out the full chart here.

When you get the voice of Lucas Oil Pro Motocross to announce your Instagram video, you know you’ve taken your social media game up a notch.

[Note from The Weege: I'll announce anything. -Ed.]

When you train day in day out... You have to have fun thanks @sheetmetal220 for the video and edit and @jasonygant for the commentating! And yes you even have to practice mid moto crashes you just never know what can happen.... #skillstopaythebills

Northern California is in the midst of one of the worst fire seasons ever. According to CBS News, the flames have displaced about 23,000 people and destroyed around 750 homes. It’s truly awful. A YouTube user recently drove through the fire to show exactly what firefighters are dealing with.

According to Lane Splitter, these guys are called StuntFreaksTeam and are from Finland. That’s about all I know. And that’s about all that matters, because they do some cool stuff on motorcycles.

So, this email showed up in my inbox earlier this week with the following text (a portion of it was cut) and the accompanying video:

The new XTERRAIN500 Electric Bicycle, however, comes with an ATV type front tire that is 10 inches wide and a 4.6-inch wide rear fat tire. Plus, it also includes a 500-watt motor that helps with propulsion. This unique combination of tires and motor power allows for easy gliding over any type of soft sand, mud, gravel, grass and even deep snow. This super innovative bike is a real ATB (All Terrain Bicycle) and will go for 20 miles on a single charge of its 48 Volt battery.  Also included with this bicycle is Shimano Turney gear and a RockShox front suspension that helps absorb uneven terrain.

Because of the XTERRAIN500’s motor, you have the option to use the electric power to help you with pedaling, or even to glide along without pedaling at all. Additionally, for those who like to ride a bike in the winter, the XTERRAIN500 also smoothly rolls over snowy terrains as well as on mud and dirt roads.

There could be a new training facility coming to North Carolina, reports the Lincoln Times-News. According to a recent article, former NASCAR team owner Brittan Schnell has plans to put a “motocross track, an arenacross facility, BMX downhill, and supercross tracks, an indoor motocross training facility, and special event space” on the proposed property in Lincolnton. There will be a meeting on the proposal September 22, according to the report.

Schnell opened The Special Event Linen Co., a hotel and restaurant tablecloth manufacturer, at a portion of the plant in 2004. Almost instantly he envisioned using the location as a sporting facility and educational campus for athletes across the country, including his 14-year-old son Brantley, one of the country’s top young motocross racers.

Through Liberty University’s Online Academy, the park would admit students as young as sixth grade and allow them to earn high school diplomas and associate’s and bachelor’s degrees via online instruction.

“There are a lot of training facilities throughout the country but when you really look at it, many times their emphasis is truly just on the sport,” Schnell said. “We looked at being able to build a foundation with these kids’ lives. Through our partnership with Liberty University, we’re able to have these kids in a nontraditional educational role in a structured educational environment.”

Read more about the proposed site here. [Note from Weege: Wait, this is just outside Charlotte. Can I shift my tax dollars from the NFL stadium to this? - Ed.]

This is one of the most bizarre, coolest videos I have ever seen. ICON Motorsports, which sells a variety of products, from helmets to armor, vests, etc., also makes movies. This crazy video below is apparently the norm. It’s a must see.

His Airness is still rolling in the dough, according to a recent PBS Newshour report. According to the report, Jordan brought in “$100 million last year from his Nike, Jumpman, and Air Jordan royalties,” which is more than he made in his entire NBA career. A lot of that is due to inflation and what not, but still, that’s a ton of money for a guy that hasn’t played a game since 2003. But, as For the Win points out, this MJ thing may be a bit different.

That’s just a product of the changing times (and inflation) though. Snow White brought in $8 million in its original theatrical release but is considered one of the top-10 earning films of all time because of various re-releases and the fact that the cost of a movie ticket today probably could have bought you a nice little one-bedroom back in 1938.

But the MJ thing is different. He’s still the highest paid player in NBA history over a single season! In his final two years with the Bulls, he earned $66.3 million. No one in NBA history has ever come close to either. Yet he still makes more money off the court and that’s for two reasons: While MJ made that $66.3 million in his last two seasons, he “only” made about $30 million in his 13 other NBA seasons. Also, people love sneakers. They just do. It’s crazy how much people love sneakers. I don’t get it but, hey, to each their own.

Check out more here. [Note from Weege: Jordan owns the Charlotte Bobcats Hornets that also play in downtown Charlotte, at Time Warner Cable Arena. How much you want to bet my taxes helped him pay for upgrades to the building? -- Ed.]