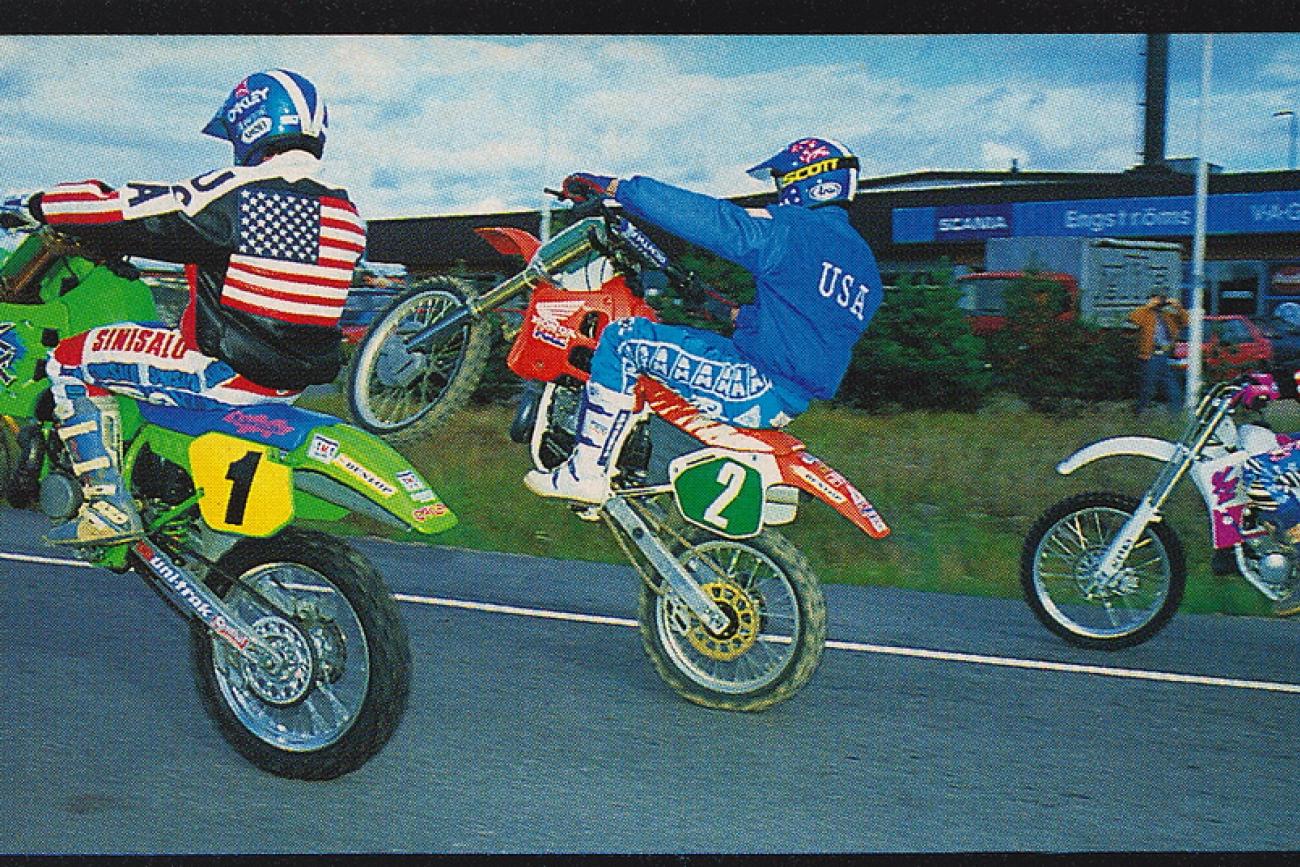 As we count down the days to the 2015 Monster Energy FIM Motocross of Nations, we are looking back at each of the twenty-two winning lineups for Team USA since 1981. Today the Monster Energy Racer X Countdown with Team USA reaches 1990. (And with apologies for the lack of photos from that era, thanks to Cycle News and TBlazier of PulpMX for the screen grabs to illustrate the action.)

Vimmerby, Sweden, is a tiny town of nine thousand inhabitants with its charter dating back to the fourteenth century. But it has a great motocross track and as a result was tapped by the FIM to host the 44th Annual FIM Motocross des Nations in 1990. Home of the world-renowned author Astrid Lindgren and her fictional character Pipi Longstocking, the charming little hamlet had a fairytale-like vibe to it. So did Team USA’s winning streak, which had by 1990 reached nine years. The European teams had no doubt grown weary of it all, but they felt they had a decent shot at winning at Vimmerby’s rough and sandy circuit located on the outskirts of town.

The race was set for Sunday, September 16, 1990, and the day was bright and sunny, with some ten thousand fans flocking to the circuit, which was laid out in a thicket of tall evergreen trees. During opening ceremonies, Team USA—first-timer Damon Bradshaw (125cc), AMA Supercross and 250 Motocross Champion Jeff Stanton (250cc), and 500 Champion Jeff Ward (500cc)—stood in the back of a small Jeep, draped in an American flag and waving to all the smiling souls who filled the narrow valley.

The American team oozed quiet confidence while getting prepared for the opening moto, but deep down, the formidable trio knew they had a fight on their hands. This time, the Grand Prix riders who made up the World Championship circuit were serious and sensed Vimmerby would be the place to finally take the Yankees down. For instance, the day before during Saturday afternoon practice, Belgian Open rider Dirk Geukens had taken it upon himself to taunt both Ward and Stanton, often pulling in behind them and shadowing the duo to the point that they both wondered just what he was doing. In fact, the burly Geukens nearly landed upon Ward in one session.

The first moto on Sunday was the combined 500cc/125cc race. When the gate dropped and the bikes pounced from the concrete starting pad, there were some strange glances exchanged in the American camp when home-team rider Stefan Larsson pulled an amazing—perhaps a bit too amazing—holeshot.

"We always use the same gate for the GPs throughout Sweden," Larsson would say after the moto, implying that there were secrets to be learned from it. Nonetheless, Larsson led the first eight laps of what would be a seventeen-lap affair before Ward flashed past. Following the American past the Swede was Team Luxembourg's Jacky Martens (who was actually from Belgium, but that’s another story). One of the world's premier sand specialists at the time, Martens would soon blitz Ward and race away to win the moto over the Kawasaki pilot. Dane Soren Mortenson was third and Belgian Geukens was fourth.

Back in the beehive that was the 125cc class, Belgian MXdN rookie Stefan Everts had a hell of a race, gliding his works Suzuki RM125 through the Swedish silica and ultimately crossing the finish line with the class moto win. For the Americans, an out-of-sorts Damon Bradshaw—Bradshaw struggled to find his form all moto—placed an off-song fourth in the 125cc class.

"I was riding the bike as hard as it could go, wide open, and just trying to stay on two wheels," a somewhat perplexed Bradshaw said afterward. His presence was something of a question mark. Bradshaw had not raced the 125 Class in 1990, and the champion was instead Guy Cooper on a Suzuki, who narrowly beat defending champ Mike Kiedrowski of Team Honda for the title. Yet Team USA manager Roger DeCoster once again decided to leave the 125 champ at home—just as he had in ’86, ’87 and ’88—choosing the pure speed of the 250 battle-tested Bradshaw instead.

When the pack roared up the start straight to initiate the 250cc/125cc moto, once again it was another Swede at the sharp end of the field (remember, same gate), as Peter Johansson was the first racer out of the forest. Jeff Stanton stalked just behind. Bradshaw was way back in sixteenth and desperate to pick off any 125cc rider he could find. By the end of lap two, Stanton, who had picked off Johansson and Italian Alex Puzar, was in front and pulling away.

"I was up there at the start where I wanted to be," Stanton said. "I knew they'd be fast at first, but once I got by I just kept pulling away, riding my race." Stanton would never be challenged. For Bradshaw, though, the race had turned into a nightmare. At the halfway point, Alan Morrison of the Irish team collided with the American and they both hit the sand in a heap. Their race was run.

"I had been behind Morrison a ways and caught up to him," Bradshaw lamented. "I went one way to pass him, and he didn't make the tabletop. I didn't even have time to think."

With Belgium and Sweden too close for comfort in the overall scoring, it was nervous time in the American pit area prior to the running of the third and final 500cc/250cc moto. Australian rider Jeff Leisk holeshot the pack, while way back and wobbling out of the first turn was Stanton, who had narrowly escaped a major crash coming out of the starting gate.

"A Russian rider just got all squirrelly and hit me, and there was nothing I could do," he explained to Cycle News journalist Nate Rauba. "I was way back, and in the first corner I was off my bike, running beside it, after I got rammed. I got back on and knew I had to ride and do the best I could."

Up front, Ward ran in fifth before the shock on his big KX packed in and called it a day. "The rebound went on the third or fourth lap and it was just a pogo stick," Ward scoffed back in the pit area.

Italian Alex Puzar led the moto aboard his works Suzuki 250, and behind him were 500cc riders Leisk and that pesky Geukens. Stanton, meanwhile, rode like a man possessed, ripping and tearing his way toward the front. At the halfway mark he was up to fifth, and soon thereafter, zapped Johansson and Finnish rider Pekka Vehkonen. Next up was the Belgian Geukens. Upon closing in on the American nemesis, the battling duo disappeared into the track's back section. Then, while all the fans waited for the duo to come back into view, Stanton was all alone. A collective gasp went up. Where was Geukens? Stanton, smirking under his helmet, had the answer.

"In practice, Geukens follows you, passes you back and forth,” he explained of the Belgian’s Saturday practice antics. “It's stupid and I got tired of his BS all day. So I put him down in the back. I parked him. He screwed with us too many times and I got tired of it.”

“He hit me in front, he went inside," Geukens said after the race. "It's not a nice way to pass."

Stanton then went on to pass Leisk, and at the finish line was just a few seconds adrift of the winner Puzar. And so it was.

And largely due to Stanton's heroic ride, Team USA had won the Motocross des Nations for the tenth consecutive time—a full decade of dominance. And what became of Dirk Geukens? After the race, he came looking for Stanton. "Congratulations," he told him, shaking his hand. "But I'll remember it for next year." Stanton shook the man’s hand and wished him well. He was already thinking about the 1991 AMA Supercross Championship.

Here’s an Italian film with some event highlights:

To read more about the twenty-two winning teams, click here.