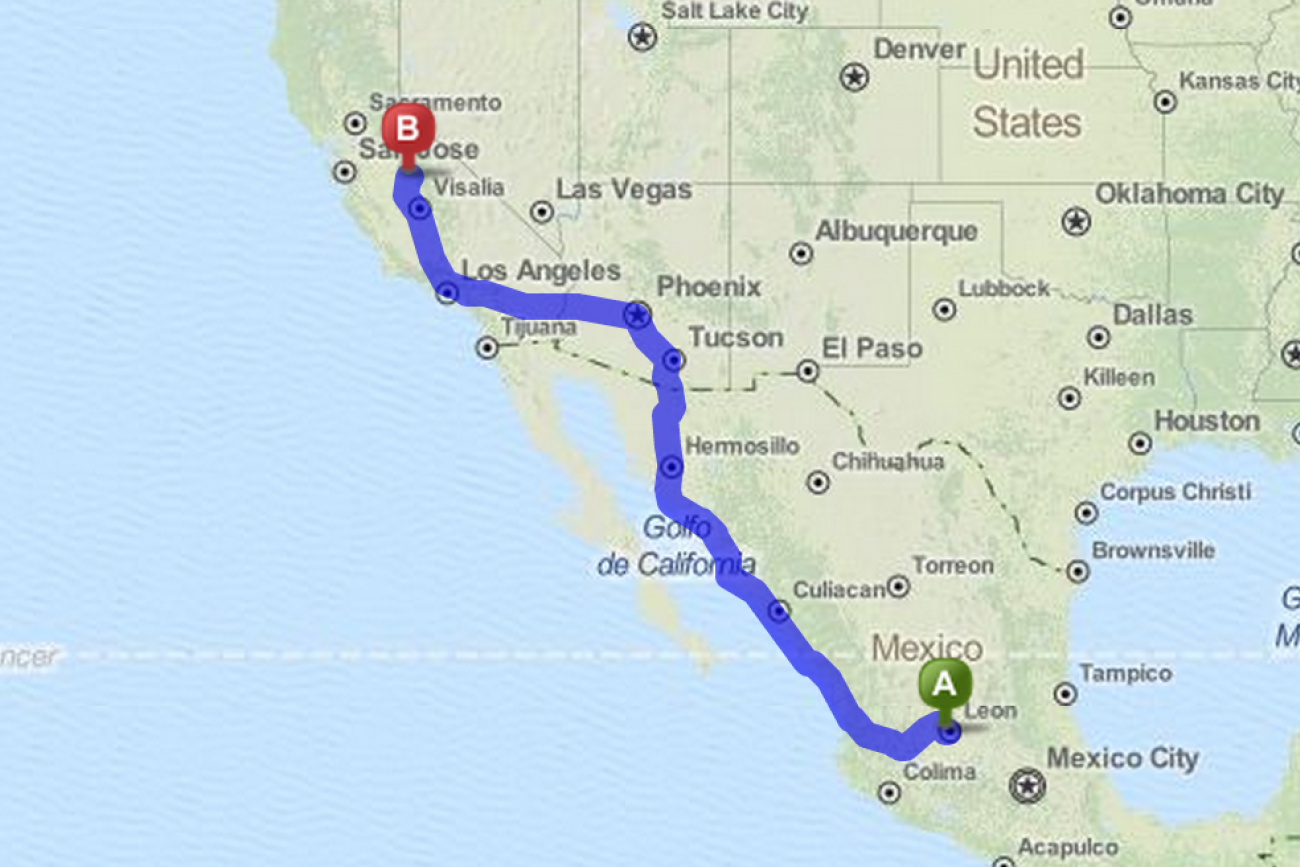 Welcome to the off-season. The next four months are the slowest point in the year for us fans. While we have some big races sprinkled in—the USGP, the Motocross of Nations, Red Bull Straight Rhythm, and the Monster Energy Cup—going long stretches without racing makes us crazy. Crazy enough for the Racer X Ultimate MX Road Trip?

To begin, you’ll first need to do two things:

1) Quit your job. This is non-negotiable. Just ask your boss about taking three months off and he or she will say the same.

2) Buy an RV and sucker two people (an odd number of friends makes it easier to solve arguments) to do the same and join you on this Ultimate Road Trip.

The goal is to hit thirteen (or fourteen) races in four different countries on three different continents over the next three months. There are only a few rules and virtually no price tag. This is our road trip and we can spend as much of your money as we want.

(Some of you may need to consult your significant other before quitting your job and spending your life savings on a road trip. Racer X will not be held responsible if such occurrences as divorce arise, although, that would really pave the way for our 2016 Ultimate Road Trip guide, coming soon!)

We realize this trip is virtually impossible. Unless your name is Dan Bilzerian the odds of you completing this trip are zero. But, if you make it to any stops, use the hashtag #RacerXUltimateRoadTrip and we just may do something cool with it. Have fun!

The first leg of our road trip finds us in Leon, Mexico, for the penultimate round of the FIM World Motocross Championship. While Romain Febvre has clinched the MXGP title in his rookie season, the MX2 class is a nail-bitter. Tim Gajser leads another rookie, Pauls Jonass, by just 13 points entering the final two rounds.

If you somehow made it out of Mexico alive and to the final round of the FIM World Motocross Championship, you’re in for a treat. This is quite a long drive (longer than we expecteded), but you have seven days to complete it, so time shouldn’t be a problem.

The GPs return to America for the first time since 2011 at the famous Glen Helen Raceway. Americans Josh Grant, Davi Millsaps, Jason Anderson, Jessy Nelson, Shane McElrath, Chris Alldredge, Joey Savatgy, and Cooper Webb are expected to compete, as are Frenchmen Christophe Pourcel and Marvin Musquin. The race will also feature Dean Wilson, Ben Townley, Cody Cooper, and more. An added bonus: the MX2 title will probably still be very much up for grabs.

Our first flight of the trip takes us to Ernee, France, and the FIM Motocross of Nations. Team USA is looking to end a three-year slide, while the home team, France, is a solid favorite and looking for a second straight Chamberlin Trophy.

While the cost of flying to France is quite steep, no Ultimate MX Road Trip is complete without a visit to the Olympics of Motocross.

Once you’re back from France, complete with your picture of you drinking from the Chamberlain Trophy, you head directly to Canada for the first round of the Canadian Arenacross Championship in Armstrong, British Columbia. This is especially convenient because if you get in major trouble in France, it could be easier to get through customs in Canada. You didn’t hear that from us, though. Located on the far west coast of Canada, snuggled between Calgary and Vancouver, Armstrong kicks off the 2015 AX Championship. Last year the series featured Canadian talent as well as Americans such as Teddy Maier, Adam Enticknap, Ricky Dietrich, and more. Amsoil Arenacross runner-up Jacob Hayes nad Chris Blose have already committed to the series this year, and we hear some more talent could be going up north for the winter.

You’ll complete a multi-city flight from Cali to France to Canada and back to Cali for the second annual Red Bull Straight Rhythm event in Pomona. (Note: The best flight we found was from Vancouver to Ontario, CA.) The event is a must attend this year, as Yoshimura Suzuki’s James Stewart will compete in his first race of the season after serving a sixteen-month suspension from the FIM..

An official rider list hasn’t been announced, but, besides Stewart, Ryan Dungey, Dean Wilson, Ken Roczen, and Marvin Musquin are all expected to appear. They’ve also moved the race from a drag-racing track to a horse track this year, so this will be a really unique setting. It was a big hit last year.

Okay, maybe a flight to Motocross of Nations is a stretch. But you can easily make this Red Bull Straight Rhythm/Monster Energy Cup tandem work. This is shortest drive of the trip, as Vegas is just under four hours from Pomona. You should get there early and spend the week in Vegas. If you get there by Monday, you could drop by Matthes’ and check out a live showing of the Pulpmx Show. I’m sure he won’t mind. (Note: You better like dogs—he has like fifty.)

This is the Anaheim 1 of the off-season. All the heavy hitters will be in attendance sporting new gear, sponsors, and maybe even new colors. Nothing is confirmed yet, but Chad Reed may be returning on his new brand.

Time to head east, and we’ve got a heck of a pit stop for you on the way. We found no major motorcycle races the weekend after the Monster Energy Cup, but on your way across the country, hit the legendary Talladega, Alabama, superspeedway for NASCAR racing at its most NASCAR-y. This is bucket-list stuff. They’re qualifying and racing all weekend, but the big Sprint Cup race is on Sunday, October 25.

There’s a good chance you’ll run into Weege in the midst of rooning another sport steeped in tradition.

Covered a @NASCAR K&N Pro Series race over the weekend for @nbcsports and ran into this. I think I missed the gate drop this time too.

You’ve got a day to work off the NASCAR hangover and get your stuff back together for a jaunt to Indiana for the Amsoil GNCC finale. The Ironman is the best track, packs the biggest crowd, nice fall weather, and even some Halloween hijinks. Go watch all day at Ironman Hill and tell us it’s not way, way more entertaining than Talladega was.

From Indiana we head west to Idaho for the penultimate round of GEICO EnduroCross. Colton Haaker, Cody Webb, and the ageless Mike Brown are locked in a tight points battle and provide quite the show.

This is an awesome, unique, unforgettable event. You’ll want to say you went one time. Not sure who is even racing it yet this year, but that hardly matters—it will be, as they say over there, 200 percent show.

Remember that you flew from to France from Nampa “International” Airport, so you’ve got to fly back and get your 1982 Winnebego from there. We’ve got a second Vegas road trip coming, complete with a double feature—two titles, two disciplines, two nights. Ready? First it’s the Orleans Arena in Vegas for the AMA Pro Racing Flat Track final. A good points battle is shaping up between Bryan Smith and Jared Mees. One of them will grab the title at a unique event inside the Orleans Arena, and then you will grab some drinks and some trouble after the event is over. But, you need to rally on Saturday morning because you’ve got to get to California.

Once you’ve nursed off the hangover, you’ll make the short drive—just under four hours—into California for the GEICO EnduroCross finale. Big points battle going between Webb, Haaker, and Brown; you’ll want to be there for this one. Your next question: where to go for Thanksgiving?

The last leg of the Racer X Ultimate MX Road Trip we’re leaving up to you. We’ve laid out three options—you can’t go wrong with any.

We’ll start with the most logistically logical stop—a short twenty-seven minute drive to San Bernardino and A Day in the Dirt. Becoming a Thanksgiving tradition on the West Coast, A Day in the Dirt started as a cool way for Hollywood stunt types to get their racing and riding fix, but has now turned into a cool weekend-long race, ride, and party at Glen Helen. By November, nearly all of the pro supercross world is out in California, so you never know who will show up. Have a look.

One of the longest running amateur events, this is considered the kick off to the annual amateur racing season (Loretta’s, in August, is the closer). The famous Gatorback Cycle Park in Gainesville, Florida, is the host site—this is a great place to see all the “next” kids making their debuts on new bikes and in new classes. Austin Forkner will still be an amateur at this point, so you get to say you saw him before he was a superstar.

Or, you could do something really big. We’re talking Stew v. Reed!

Let’s get crazy, bros. James Stewart will meet Chad Reed on Reed’s turf in Australia, for the next-to last round of the Australian Supercross Series. This is superb, and by the way, it’s summer in Australia this time of year, so you can take in Sydney and also some great weather. Do it!

If you’re already in Australia, you might as well stay for the final round of the championship. Thanksgiving is an American holiday; it will be there next year. Blow it off once for a week on an Aussie beach in the summer.

Well, that’s all there is to it. You’ve completed the first Racer X Ultimate MX Road Trip, and all you’ve done is lost your job and blown your money. But, hey, think of the memories! You also have a sweet 1982 Winnebago now, so get the oil changed in that thing. Anaheim 1 is just over a month away!

Check out the entire off-season schedule and visit your nearest event. See you at the races?