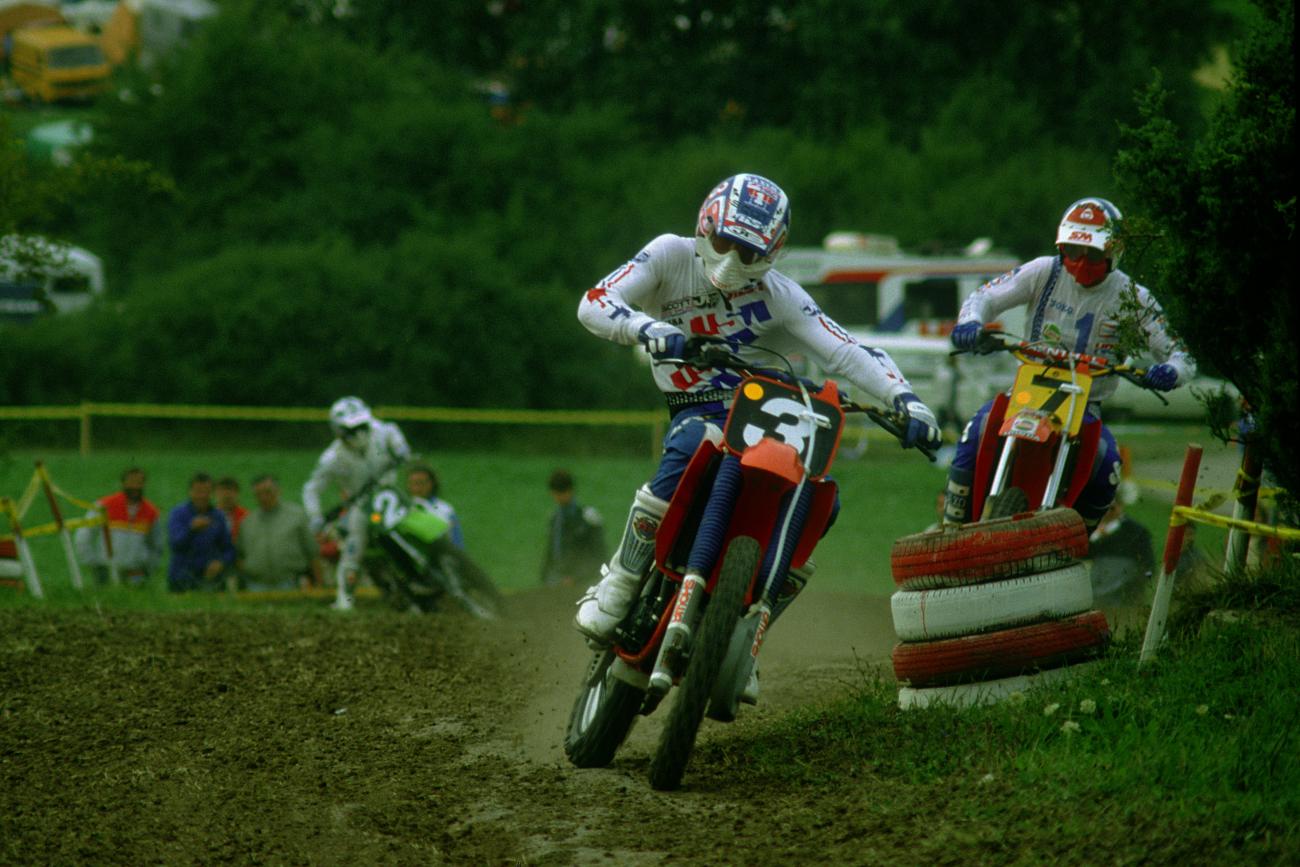 As the 2015 Monster Energy FIM Motocross of Nations draws closer, we are counting down the days by looking back at each of the twenty-two lineups for Team USA that won the event. Today our Monster Energy Team USA countdown reaches 1985, when David Bailey, Jeff Ward, and Ron Lechien took on the world in Gaildorf, Germany.

With Team USA having swept both the Motocross and Trophee des Nations for four consecutive years, the FIM decided to drastically change the event format—and not just because the Americans kept winning. By 1985 the costs of racing were rising, and it was becoming more and more difficult for many countries to field four-man teams for 250cc (Trophee) and 500cc (Motocross) on successive weekends. That meant eight different bikes per team to compete in both events. Add it all up and it made more sense to run just one race—the Motocross des Nations—for three-man teams, and each team would field a 125cc rider, a 250cc rider, and an Open class rider. Previously there had been a modestly attended Coupe des Nations for 125cc-only from 1981-’84, won by Italy twice, Belgium once, and the Netherlands once. Now the 125s would be included on the big stage, racing against bigger bikes—and all at the same time! There would be three motos, and in 1985, all three riders would ride all three motos. The turnout of a record twenty-one teams meant there would be sixty-three riders on the track at the same time, all of them doing thirty-minutes-plus-two-laps motos, from a double-row start. Each class was scored separately, so there were basically three winners per moto—one for each division. And in the end, the six best of each team’s nine finishes would determine who won the Peter Chamberlain Trophy.

For Team USA, those riders were the seasoned David Bailey (500) and Jeff Ward (250), plus newly crowned AMA 125cc National Champion Ron Lechien. Bailey and Ward were established international stars, but the teenaged Lechien was just coming into his own. But having won all but two of the 125 nationals he entered that summer, he was not considered a weak link, just an untested one.

Making matters more difficult was the weather, with intermittent showers making the track fairly slick for the first two motos, before getting very dry and slick in the third and final moto.

With twenty-one teams and a forty-two-bike starting gate, one member of each team would have to start in the back row. For the Americans the decision was made to put Lechien on the back row on the 125, giving Bailey and Ward better shots at actual holeshots. True to form, Bailey holeshot the first moto on his works Honda, just ahead of HRC Honda rider David Thorpe of Great Britain. Dutch KTM rider Kees Van der Ven, then known as a sand specialist, was third ahead of Ward after the 100-yards-long start.

Where was Lechien? Sixty-first place!

“Thorpe dialed it off the gate and blinded me,” said Lechien, who had started right behind the newly crowned 500cc World Champion. “I got to the first corner and there was nowhere to go—there was just wall-to-wall riders.”

Speaking of Thorpe, many American fans have given him much less respect than he deserves given the events of the following year—the 1986 Team USA romp at Maggiora, where Johnny O’Mara beat him on his 125. But they often overlook Thorpe’s remarkable 1985 performance, where he would pass Bailey in the first moto and go on to win, narrowly lose the second moto to Van der Ven, and then win outright again in the third and final moto. In the first-ever combined MXoN event, with all classes and all riders, Thorpe went 1-2-1, beating Team USA’s superb 500 rider David Bailey all three times. Great Britain might have had a shot if not for the unlucky broken leg suffered by 250 rider Kurt Nicoll on Saturday, leaving Thorpe and teammate Rob Andrews on the KX125 to account for all six scores.

“If Kurt had been well, the Yanks wouldn’t have won,” Thorpe said afterward. “There would have been no problem.”

And Lechien’s efforts on the 125 at Gaildorf are also often overlooked, including the fact that he passed forty-nine riders in the first moto to get to twelfth (second 125 behind Finland’s Pekka Vehkonnen) and then finishing fifth and fourth in the last motos, even while starting in the second row!

“Winning this event has always been one of my career goals,” Lechien said afterward. “But it was a lot tougher than I thought it was going to be. I had a tough time keeping [Davey] Strijbos behind me in the rain, which came down pretty hard in the second moto, but I loved it when the track dried out a bit in the final moto. Some of the Europeans are a lot faster than I thought.”

Bailey never quite showed a full level of comfort on the same Gaildorf circuit where he helped Team USA win as a substitute for Donnie Hansen in 1982. “Some fat guy on a Cagiva ran me all the way into the woods on the back section of the track in the second moto,” Bailey said. “I went over the wood poles holding up the banners and got banners caught in my rear wheel. It wasn’t two corners later that I crashed after passing the guy back, then I had to pass him again.”

Bailey was actually a substitute this year as well, after original 500 entry Broc Glover injured his wrist. “I couldn’t believe how fast Thorpe and Van der Ven were going,” said Bailey after the race, “And I kept telling myself, We have to win this thing. I replaced Broc on the team and didn’t want to face him if we didn’t pull it off. I was wide open all the way until the last two laps of the final moto—the track was so slick in some places it was like ice-skating.” Bailey would avenge himself one year later at Maggiora.

For his part, Ward, on the KX250, was glad to have won, though he wanted to go after Thorpe, but it just wasn’t in the cards on a 250, of which he was the highest-placing rider in all three motos (5-3-3 overall).

“It feels great to be on the winning team, but I liked it better when everyone was on the same size bike,” Ward said. “This way, it’s hard to say who’s best. Our team was definitely the best, but I would’ve liked a chance to chase Thorpe down on a 500cc bike instead of my 250. If they keep the format this way, they should use a staggered start.”

They did keep the format this way, for the most part, but there would be no staggered starts. No matter, Team USA had won again—now five years on the trot—and no one could have imagined that this winning streak wasn’t even at its halfway mark. The pressure of the streak was building on Roger DeCoster, but every year, even with different lineups and drastically different formats, the Americans kept on winning.

Here’s a rough video compilation of all of the highlights.

And here’s a more condensed version, from the British TV coverage.