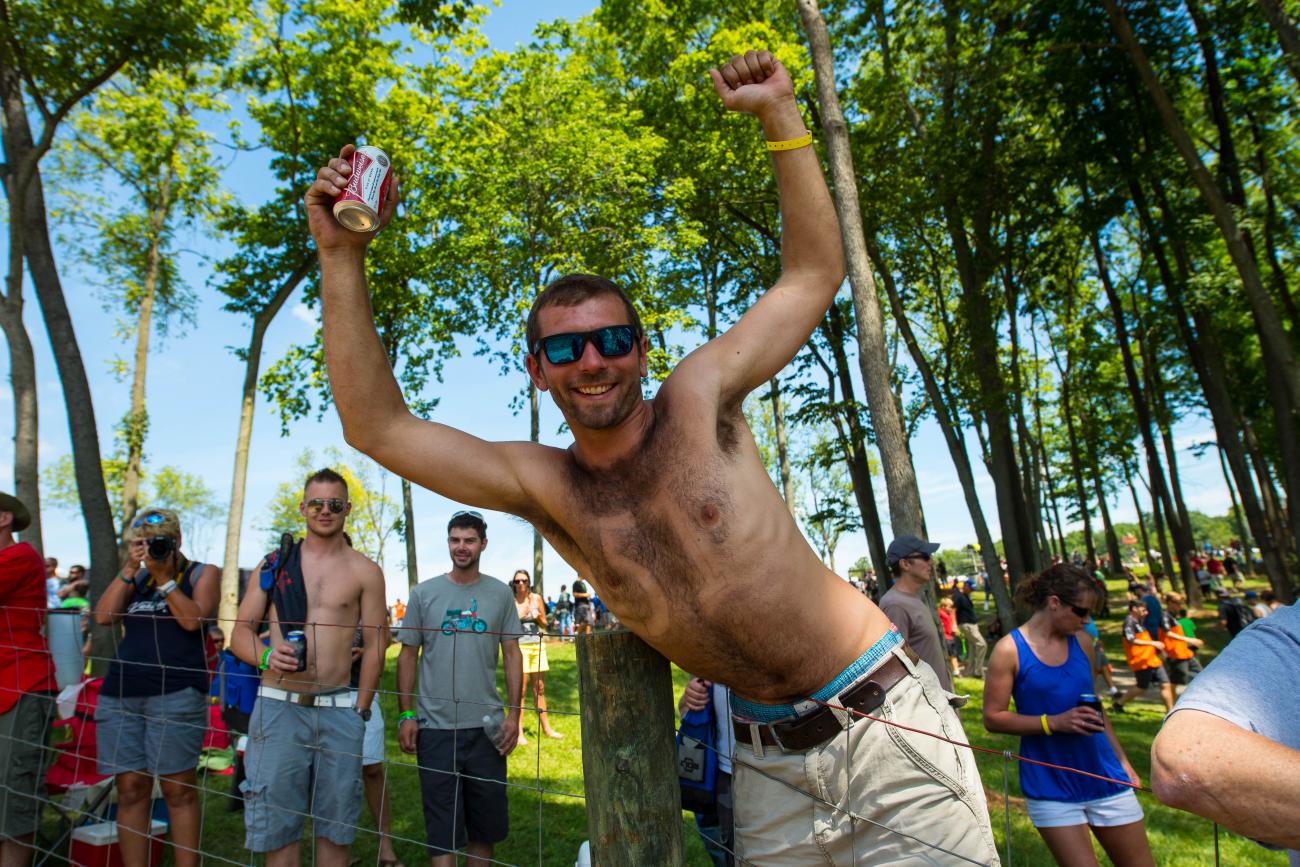 The one, nay, the only thing that sucks about surfing are the giant sharks you will encounter if you hang out on your board long enough. Two thousand pound, man-eating things that swim in the ocean are sure to kill your surf buzz. No worries, bro—you can now surf in peace thanks to Australian surfer Arlen Macpherson, who according to Reuters, installed a “electronic shark repellent device,” on his board. In the report, Reuters says “Macpherson paid $390 for a device embedded in his surf board to repel sharks by emitting an electronic force field that overpowers its sensing organs.” Get eaten by a shark or shell out $390 bones? I’ll take the latter.

Staying Fit on the Road

The action is fake, but pro wrestlers are still some of the fittest athletes on the planet. Maybe you've noticed that they, um, seem to work out a lot? They also travel more than any other sports profession, sometimes on the road an incredible three hundred days a year. They aren’t taking first-class round trips, either; a lot of their travel is driving. If you travel, you know how hard it is to eat correctly and work out while on the road. So, how do these dudes still look like gods in the ring while on the road most of the year? GQ asked some five of WWE’s biggest stars. Moto guys will relate to this Q&A.

Is there a certain place you rely on for food when you’re on the road?

Charlotte: Or Moe’s. But only if you can’t find a Chipotle first. [laughs]

Seth: Yeah, Chipotle’s the universal one. They’re pretty much everywhere. It’s fresh ingredients. It’s quality. Now everything they have is non-GMO. If you can just get a bowl with a bunch of meat and vegetables and rice, you’re pretty set.

Roman: It’s just simple and delicious. I’ll do anywhere from two to three scoops of chicken, and then sometimes the barbacoa if the time’s right.

Cesaro: I go and get three bowls to go, and then I have my protein shake after my workouts. That’s pretty much my road diet. [laughs] I usually get brown rice and black beans. I’ll do one bowl with double chicken, one with double steak, and one with chicken and steak. It’s fresh, it’s fast, and it’s reliable.

Kofi: Anytime we can hit a Chipotle, we always stop.

In 2008, professional snowmobiler Mike Schultz sustained a compound fracture of his left leg, which eventually required amputation. By the following summer, Mike was already back on the bike, earning silver at X Games. In 2010, Mike founded BioDapt and developed the Moto Knee, which utilizes a Fox mountain bike shock. Translogic caught up with Schultz to talk about his creation in this amazing story.

Brad Pitt, the dreamy American actor known for such movies as Ocean’s Eleven, Fight Club, and Snatch, recently teamed with filmmaker Mark Neale—who directed five previous documentaries—to co-produce and narrate a new film about MotoGP. The movie, which hit UK theaters earlier this week, follows six riders—two-time world champion Marc Marquez, his teammate Dani Pedrosa, two-time world champion Jorge Lorenzo, seven-time world champion Valentino Rossi, retired two-time world champion Casey Stoner, and Marco Simoncelli, who died in a racing accident in 2011—from their beginnings to their on-track battles and more. Pitt is apparently a huge MotoGP fan and attended the British Grand Prix last weekend for the premier of the movie where MotoGP.com caught up with him. The DVD and Blu-Ray will be released September 7, which you can order here. Check out the trailer for Hitting the Apex below.

(Note: I have no idea if this took place in WV, but it seems fitting.)

Who Lost the Most?

I don’t gamble much. Mainly because I suck at it. But, when I do, I tend to rake it in. Just ask the dealers at Soaring Eagle Casino! The Economist recently put together a chart of which country losses the most gambling each year…and Australia definitely sucks the worst. Singapore and the United States are next. :(

Asia is home to the unluckiest punters on a per-adult basis. Australians gamble (and lose) the most: an estimated $1,130 for every adult in the country, owing to a highly penetrated bricks-and-mortar market and a high propensity to gamble. A sizeable share of the losses are spent on "pokies" or video-poker machines. Australia has the highest concentration of such machines in the world, on which a person can lose over $1,500 an hour, though tighter regulation on these have seen the country fall to sixth place in absolute terms in recent years.

Is so happening…if you live in Seattle. The online retail giant announced this week it would start delivering wine, beer, and spirits to Prime Now customers around the Seattle area, says The Verge. And, here is the best part: it only takes one to two hours. These Amazon guys are on to something.

You'll need to enter your zip code at the company's website to confirm that Amazon's instant gratification service is really available at your address. Prime Now has previously rolled out in Atlanta, Austin, Baltimore, Chicago, Dallas, Indianapolis, Manhattan, and Miami.

"Tens of thousands" of products can be purchased through the service, though for many items you'll still need to wait for free two-day shipping (or Prime's cheap overnight delivery) like some kind of animal. In the Seattle vicinity, Amazon says Prime Now deliveries will run from 8AM local time until midnight — yes, Sundays included. As in other cities, you'll have to pay extra ($7.99) to receive a package within the hour, but if you can wait even just two hours, it's completely free. As the name implies, you'll need an active Amazon Prime subscription ($99/year) to take advantage of the service.

Smacked by a BeAr

Lesson #1: DO NOT MESS WITH BEARS.

Earlier this year, American Pharoah became the first Triple Crown winner since 1978. Which is cool and all, but what is even cooler is getting a POV of what it would be like to ride the horse. The horse runs a GoPro and is sponsored by Monster Energy. What is this, motocross?

Here's the GoPro footage. Now, this is worth waiting thirty plus years for.

Ken Roczen had surgery this week to fix a back injury that has been bothering him for much of the season. Ken then went on Instagram after the surgey and it was glorious.

To all the single ladies out there, the following is an update from Wil Hahn.

Well. Here it goes.... I can't finally give all you ladies a break. I'll be taking the next two years off... Hahha #evenlessgame #brushingteeth24/7

Turn Down 60 Million For What

Steve Ballmer, the former Microsoft CEO who bought the Los Angles Clippers last year for a record $2 billion, is said to have turned down $60-million-a-year offer for local TV rights, according to the New York Post. Why? Ballmer may be starting his own streaming network, becoming the first owner of a major sports team to bypass the traditional cable or satellite companies. More from the Post:

Prime Ticket currently pays the team a rights fee of $25 million a year — and offered a 140 percent increase, to $60 million, but the billionaire Ballmer turned it aside.

Prime Ticket’s exclusive negotiating window closed in June, one source said — meaning Ballmer is free to negotiate with others.

Some observers think the bombastic Ballmer is merely using the threat of forming an over-the-top network as a play to wring more mon­ey from an RSN.

But others think the plan is real.

“Steve Ballmer has not renewed his deal with Fox,” said one source close to the situation. “He’s looking at a [digital] subscription channel.”

McD’s in the AM, and at Night

One of the worst things in the world is pulling up to McDonald’s, or some other local fast food joint, well hung-over, craving an Egg McWhatever, and the lady screaming that it’s 10:45 and they stop serving at 10:30. Seriously, that should be a crime. Good news, folks! If you’re craving that McEggFlurry at McDonald’s, you can go anytime, as they will start serve breakfast ALL DAY (!!!!) October 6, according to the Wall Street Journal.

The move to all-day breakfast, which McDonald’s has been testing since March and will start Oct. 6, was approved in a vote by franchisees last week and affirmed Tuesday by a franchisee leadership council, the company said.

The expansion marks the latest initiative under Chief Executive Steve Easterbrook, who took over on March 1 vowing to revamp the burger giant’s stale image and end a sales slump in the U.S. that began nearly three years ago.