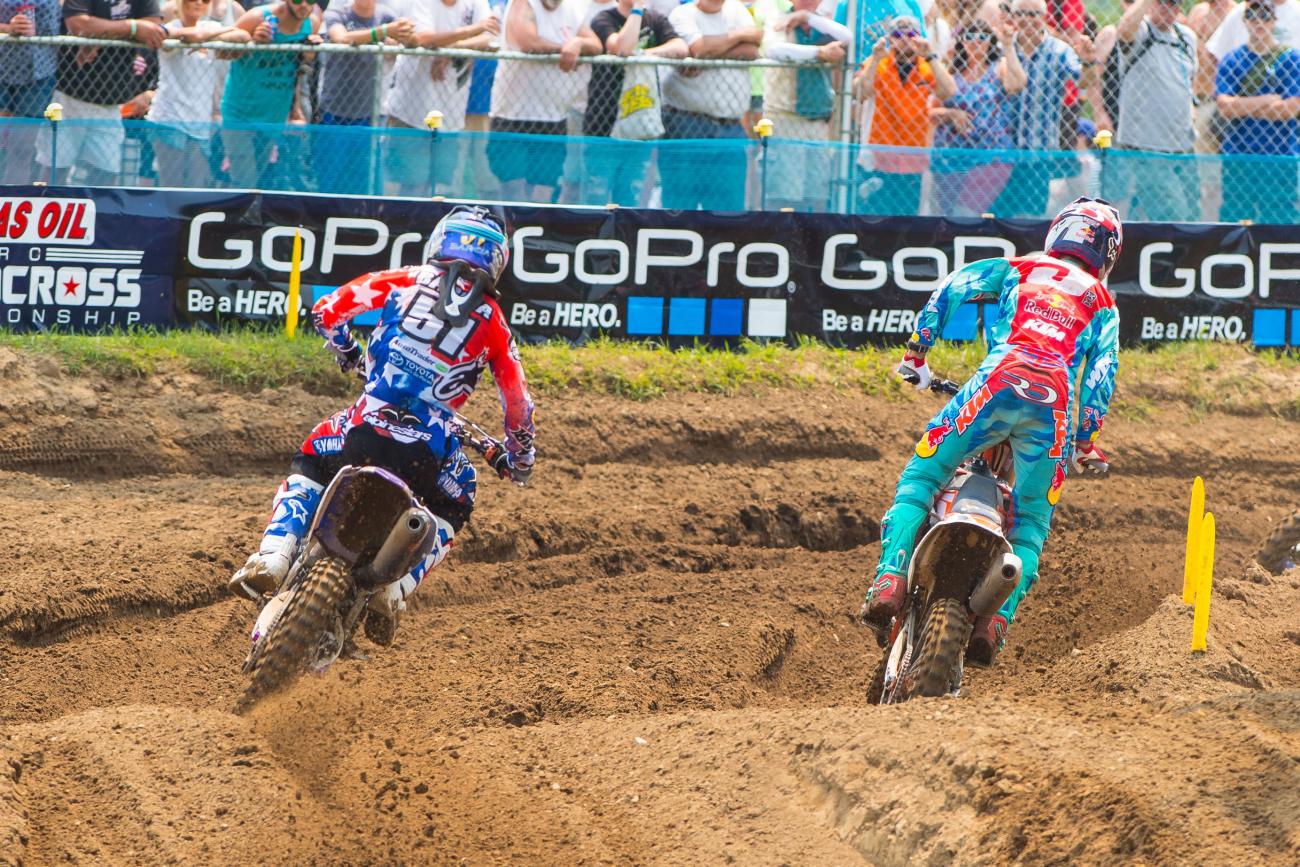 3 on 3 Questions after Looking Back

The 2015 season is in the books, and our staff is going to have a quick look back. Be sure to weigh in with your answers to these questions below—this is what bench racing is all about!

1. What was the craziest "I can't believe I just saw that!" moment of the year?

Chase Stallo: This may not rank as the craziest moment of the year—most will point to Chad Reed’s black flag or Roczen face planting in Oakland—but it may be the most underrated. During practice in Houston, I happened to catch Alex Martin flying through the air, sans bike, reminiscent of a Mad Skills MX crash, out of the corner of my eye. Instantly, I began searching social media to see if anyone had footage. Someone had sent the video to privateer AJ Catanzaro, who posted it to his account. Once you see the video, you’ll see why it ranks high on the “I can’t believe I just saw that!” moment of the year for me. How Martin survived this crash uninjured is beyond logic.

Most hilarious crash I've ever seen in my life. Made my day that someone got this on film. Glad you're alright little guy @alexmartin_31

Aaron Hansel: Really? We have to pick just one? From Eli Tomac’s early domination to Marvin Musquin’s incredible (and unintentional) Nac-Nac save at the finale, and from saboteurs disabling Case Clason's bike at Glen Helen to the inflammatory interview with Ken Roczen’s dad, the 2015 Lucas Oil Pro Motocross Championship had plenty of on- and off-track moments that left me scooping my jaw off the bleachers. That includes Jeremy Martin ripping through the pack on multiple occasions and Adam Cianciarulo launching the gigantic Fly 150 triple step-up at Hangtown. But since we’ve got to pick one, I’ll go with Weston Peick’s crazy save at Glen Helen. It would have been incredible anywhere, but having seen in person how rough that track was, his save was especially crazy. The look of annoyance on Mitch Payton’s face as he was getting patted down by airport security the morning after Utah is a close second. Sorry, folks, no video of that one available.

Jason Weigandt: I suggest we call this the “Chad Reed Memorial Chadapult Moment of the Year.” That’s the all-time moment. As for this year, when Ryan Dungey was going over the bars at the start of Budds Creek’s second moto, I thought, This could change everything. But the racing gods giveth and taketh. Dungey was crashing because it was muddy, but he was also safe because it was muddy—he landed in mush, slipped instead of stuck, and ended up completely unhurt.

But the real reason this Dungey moment seemed so big was because of what happened to Eli Tomac three races earlier at Thunder Valley. At the moment when Eli went down, we weren’t sure just how hurt he was, and there was a chance he could maybe get back in the game the next weekend. It turned out he was done, and I had flashbacks to that when Dungey was rolling the windows at Budds Creek. Now Eli’s 2015 outdoor season will go into the all-time “What If?” bin. We’ll forever wonder if anyone could have challenged him, forever wonder how many motos he could have won, forever wonder what he could have done at other tracks, or, gasp, on Team USA at the Motocross of Nations. Dungey, Roczen, and Barcia were good, but what we saw from Eli was positively next level. Let’s hope that he’s back healthy next year and we don’t wonder “What if?” forever.

2. Who was the biggest surprise rider of the Nationals?

Stallo: It’s easy to look at guys like Aaron Plessinger or Joey Savatgy or Blake Baggett or Jason Anderson and say, “Yeah, I didn’t think they would do that good.” Yet, when it comes down to it, isn’t that why they have factory rides? Are they not paid to get good results? So, while I think all of the above may have had better years than some (or most) expected, at the end of the day, they were signed with the expectation that eventually they would produce said results.

Before the season, if you would have told me privateer Hayden Mellross would get top twenty in the 250 Class outdoors, I would have said two things: 1) Who is Hayden Mellross? and 2) No. I’ll be completely honest; prior to the start of supercross, I had zero knowledge of the privateer from Australia. As his results improved, and his story got out there more, you began to see how impressive his summer was. He scored points in twelve of twenty-two motos (he missed Washougal), which included five top-fifteen performances. Mellross reminds me a bit of fellow Australian Jackson Richardson—highly under the radar, on inferior equipment, producing solid results. Hopefully he can find enough support to make another run in 2016.

Hansel: Cycle Trader.com/Rock River Yamaha’s Alex Martin comes to mind here—he had some outstanding moments over the summer and even won a moto when his brother Jeremy stalled his bike on the final lap at a muddy Budds Creek. But considering Martin’s been on a steady rise the last two years, it’s hard to say he was the biggest surprise. I thought Benny Bloss’ pro debut in Indiana, where he went 17-15 for fifteenth overall in the 450 Class, was extremely impressive, and Dean Wilson’s late-moto surge in Utah to take the spot back from Trey Canard made my eyebrows bang my ball cap too.

But the most surprising? Jake Gagne. You know, the road racer who had a road race title on the line and still opted to try his hand at professional motocross for the first time at Utah? Yeah, that guy. Sure, he skipped the second moto when he felt an injury flaring up, but he nearly earned points (twenty-second) in the first moto, which is incredible for a rider whose main discipline doesn’t even take place in the dirt.

Weigandt: I broke into this industry covering the Grand National Cross Country Series, where Scott Plessinger is a legend, and when his son Aaron started tearing it up in the woods (and also on the moto track—AP was pretty good at Loretta’s) I had a front row seat. So, now I get the chance to say I saw this coming. I didn’t. Aaron was always a nice kid and had some talent, but I just didn’t think he’d be this good. I thought he was on the borderline of making it—maybe he’d get a factory deal and make a go of it in moto, but it was no guarantee. Well, he stepped up and got that ride, but now he’s gone a step further and is on the verge of “the man” status in the 250s once some others graduate. I saw him a long time ago, but I never saw this coming.

Further, while he did very well in supercross, I was afraid he’d struggle outdoors. He’s so damned tall, and while that can work on jumps and whoops, I thought his size might hurt him in the ruts and turns outdoors. Plus, you figure he’s giving away some pounds to the smaller kids. Well, that didn’t really matter, and in fact his height seemed to help on some of the nasty rough tracks at the end of the year, the same way Dean Wilson used it to his advantage on a 250 years ago. The lesson, as always: never, ever judge a motocross rider on size. Small dudes can win on 450s and handle whoops; big dudes can win on 250s and rail ruts. Basically, whatever I thought I knew, I actually didn’t. Good work, Aaron, you really did make it!

3. What was the best moto of the summer?

Stallo: First 250 moto at Budds Creek, and I really don’t see how you can say otherwise. You had all the variables of a great story: two brothers, one the defending class champion, the other a long-time privateer searching for his first win, battling in the rain and mud, with neither having goggles, which eventually lead to Jeremy Martin passing Alex Martin late in the moto, only to stall (!!!!) with a few corners to go, leading to Alex capturing his first career win and Jeremy finishing second for a 1-2 brother finish. Need I say more?

Hansel: There were plenty of thrill rides this summer, but unlike questions one and two, this one’s easy—moto two at RedBud. You just knew Ryan Dungey was going to get Justin Barcia for the overall, or Barcia was going to take them both out trying to prevent it from happening, right? Wrong. The two put on what was, in my opinion, the most exciting battle of the Nationals, with Barcia backing up his muddy win at Budds with a victory in the dry mayhem of RedBud. What made it more electrifying was the feeling we were going to see the two go at it like that for the rest of the summer—it really injected some excitement into the series.

Weigandt: RedBud’s second 450 moto was awesome, plus it was a live show on NBC. Too often we get a barnburner first moto and then a dud on the big network later in the day. Big thanks to Barcia for stepping up to the Dungey challenge. Hansel already used that one, though, so I’m going with a sleeper: Unadilla’s second 250 moto. That thing was crazy. First you had Joey Savatgy leading, until a tornado of Marvin Musquin and Cooper Webb stormed through. Marvin did some swerving, Cooper got mad and activated missile lock, and for about ten minutes you watched him try to line Marvin up for a kill shot. But Marvin rode like a champion, and also rode it like he stole it, trying to get away. Cooper wanted it so badly that he tried a double no one else on a 250 could do, and he crashed, which let Marvin escape but also re-gifted Savatgy with the overall win via a 2-2. Big win for Joey, big moto win for Marvin, big drama thanks to Cooper. Man, the 250 Class was not short on storylines this year.