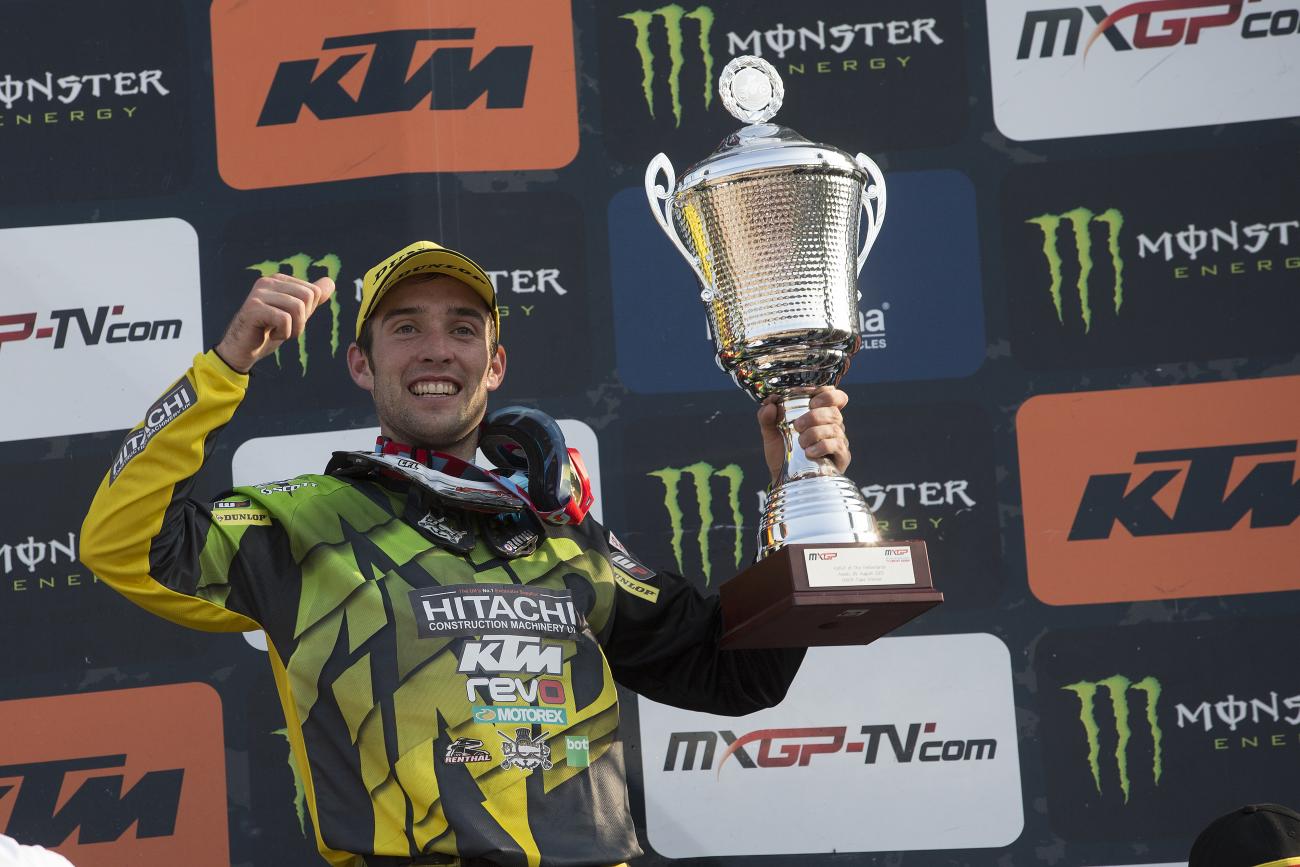 Race Report MXGP of the Netherlands

Romain Febvre has been feeding on MXGP all season—as only a maturing and confident 23-year-old 450 rookie can—and polished off the last morsel at the surprisingly effective and atmospheric setting of Assen for the Grand Prix of Netherlands. Getting second place overall to Hitachi Construction Machinery Revo KTM’s Shaun Simpson, who owned the proceedings once more with his superlative sand skills, was enough for Febvre to end a fading challenge to his superiority by HRC Honda’s Gautier Paulin.

The factory Yamaha rider made a small piece of history. Not since 2009 had a rookie won the premier class (incidentally, also Yamaha’s last year of success), and not since 2002 had a Frenchman taken the title (Mickael Pichon, 250cc). Febvre managed the feat with his eleventh straight podium appearance, helped by his twelfth moto win with a 5-1. There are still two rounds and 100 points of MXGP to go.

Zolder, Donington Park, Mallory Park, Lausitzring, Jerez—placing MXGP into road-racing facilities is nothing new, but the only real survivor among all the “experiments” has been Losail, a circuit of immense resources and pride to the Qatari state, with three editions. Assen is a legendary venue for MotoGP and Superbike, the Indianapolis of asphalt bike racing with almost one hundred years of history, with this year representing the sixtieth anniversary of the current motorsport facility seeing track action.

Did it work? Assen was not motocross in the traditional sense, and in a country with a selection of capable sand tracks with a lot of history and character, there was a degree of concern beforehand (although not from the fans apparently, with very healthy pre-event sales). It was a bold step by the circuit itself and through Youthstream wanting to modernize the image and infrastructure of the sport. Numbers such as 1,500 truckloads of sand and 25,000 cubic tons of imported terrain were bandied around as Assen rushed in four days and nights to become a beacon for how motocross can be transplanted.

The course was perilously close to elements of the permanent structure in places, which will have to be examined for future editions, and the length as the lap time was too short at under 1:40. Bringing the spectators into the massive grandstand and as close to the action as possible turned out to be a masterstroke, and it created a vacuum of noise around the majority of the track, particularly when Red Bull KTM’s Davy Pootjes grabbed a holeshot or Rockstar Suzuki’s Glen Coldenhoff pushed up to second place in the second moto to earn his second MXGP podium (two of the top three at the end of the day were 2015 rookies). The sand itself wore down and the hard artificial base perplexed some, but overall it was a winner: there is nothing better in motocross than seeing a voluminous crowd going bananas over some decent action. The Dutch sunshine helped as well.

In the first moto, Simpson recovered from a third-corner fall to slay the rest of the field Lommel-style, but there was concern among Febvre’s fans that the #461 might have to wait until Mexico for the gold plate. Paulin had delayed the inevitable by running to second behind the KTM of Simpson and Febvre could not pass Coldenhoff for third.

For the final moto, Febvre needed to finish ahead of Paulin by two positions to take the championship. He nailed his second start and caught the tiring Evgeny Bobryshev, silencing any doubt about his impending championship. Simpson lingered for a while, but his comeback in the first moto made him sluggish, and as Febvre escaped the lively Coldenhoff—bolstered by the vocal din beside him every lap-who slipped past Simpson to sit in second place. Paulin would then need to get to third, but he had gotten away poorly in the depths of the top ten, and although his lap times were consistent, they weren’t enough to catch Coldenhoff and Simpson and prevent his Motocross of Nations teammate from celebrating. (Check out Monday Conversation with Romain Febvre for his reactions from Assen).

All the while it was a strange scenario for the watching Tony Cairoli. The Sicilian has dominated the MXGP class for the last six years, as well most of the sandy Grands Prix in the premier class. It will be fascinating to see how the ex-champion dials in his 450SX-F for 2016, and how he attacks the class with renewed vigour. Paulin also will have a working base with Honda in place to raise his game. Speaking with Red Bull IceOne Husqvarna’s Max Nagl afterward, the German admitted that he had struggled to come to terms with the fact that six red plates before his broken ankle did not extend into a viable fight for the championship and sixth place was the beginning of a recovery for the #12.

MXGP is in the books, but MX2 took another interesting turn. We’ve already seen Monster Energy Kawasaki’s Dylan Ferrandis and Jordi Tixier, as well as Wilvo Nestaan Husqvarna’s Alex Tonkov, lost to injury; and Standing Construct Yamaha’s Valentin Guillod cursed by crashes and misfortune to drop out of the championship race. Monster Energy DRT’s Max Anstie has learned the harsh price of inconsistency through a phase of the campaign, and of course Jeffrey Herlings had to endure the sort of bad luck that will make the Dutchman afraid of black cats, the number thirteen, and broken mirrors for the rest of his days.

Although Anstie won a moto for the fifth Grand Prix in a row, his loop-out while in second place during the first moto, which pushed him down to ninth, was a blow to his chance to take the championship from the current leaders, Red Bull KTM’s Pauls Jonass and HRC Gariboldi’s Tim Gajser. The latter was horrifically off the pace on Saturday, so much so that the team can be forgiven for advising the 18-year-old Slovenian to minimize the points loss to a feisty Jonass.

A different #243 came out to play on Sunday, and although neither of his starts were impressive, his trails through the top ten were. Gajser won for the fifth time in 2015 and passed Herlings’ haul of four triumphs with a 1-2. In doing so he snatched the red plate from Jonass for the first time in his career and the first for Honda since Marvin Musquin had the honor back in 2009.

Jonass also rode fantastically well, earning third place in the first moto. Then, in the first corner of the second moto, Gajser clipped him while he was on the ground, mangling his front brake. The Latvian lost almost two laps getting back to the pits and the whole mechanism was hastily removed from the bike. From there he made a brakeless charge to thirteenth, which keeps Gajser in sight with just 13 points separating the two.

Behind Gajser and Anstie on the podium was Kemea Yamaha’s Brent Van Doninck. The rookie rode to a 4-4 to give the Belgian team their first Grand Prix trophy, a just reward for all of the work and investment that businessman and former rider Hans Corvers puts into the presentable and friendly setup managed by former Belgian great Marnicq Bervoets. A word also for Monster Energy Kawasaki’s Thomas Covington, who posted a sixth place in the first moto for his best finish since round two in Argentina. The Alabama native recovered from a “moment” in the second moto to reach eleventh.

Holland drew the final rounds of the European Championship together, where Nick Kouwenberg (EMX250), Jorge Prado (EMX125, watch out for him in AMA Supercross), and Emil Weckman (EMX150) all confirmed their respective series.

The FIM World Motocross Championship now heads to the Americas. Leon, Mexico, will entertain MXGP next for the second time on September 11-12. Seven days later, the series will close at Glen Helen, where a degree of mystery with regards to the entry list and perhaps even its sustainability after well-organized but mildly received attempts in 2009 and 2010 surround the event.

Round 16 - Assen - GP of the Netherlands