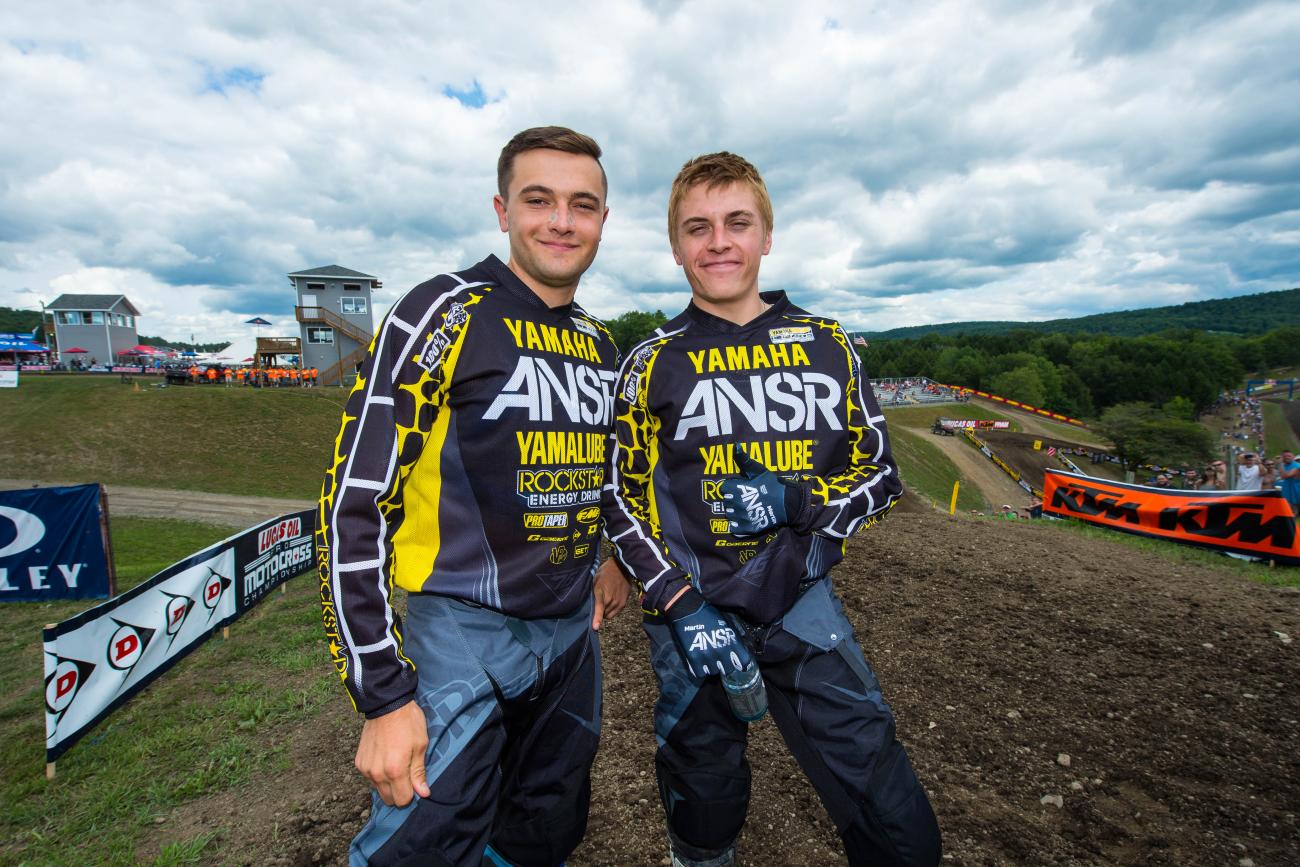 There are two types of Motocross of Nations teams: one squad is built in a perfect world, and the other races in reality. The reality is that this race comes at the end of a long season, and injuries usually eliminate great talent for every country.

For example, despite five years of career overlap, James Stewart and Ricky Carmichael never raced on Team USA together. Stew turned pro in 2002, but Team USA didn’t participate that year. They also didn’t send a team in 2004. The 2003 des Nations format featured one moto with everyone on open bikes, so Stew and his 125 didn’t get the nod. James was hurt in 2005, then Ricky got hurt in 2006, then James was hurt in 2007. The history books lack for a Carmichael/Stewart super team, and that’s a big loss.

Further, can you imagine if Travis Pastrana had reached his potential as a racer? He was part of a winning Team USA effort in 2000, but if there had been a Carmichael/Stewart/Pastrana team, even once, fans would have mobbed the airport when those rock stars arrived.

This year’s lineup of Justin Barcia, Jeremy Martin, and Cooper Webb is capable and motivated. But we all know where this team started. Eli Tomac’s incredible/ridiculous/amazing speed early in the 450 Lucas Oil Pro Motocross Championship presented a tantalizing prospect for the ‘Nations. He even gave a glimpse of it at last year’s event while charging from last in the final moto. This 2015 Tomac could have been like a bomb dropping on the comp. Alas, he’s out with double shoulder injuries. Further, combining Tomac with a healthy Trey Canard and a willing Ryan Dungey would have been a potent squad. Stick one of them on a 250 and let the cards fall.

Canard broke his arm in supercross and only just recently got back to racing, and Dungey bowed out, which is understandable. His six straight Team USA appearances tie Jeff Emig’s 1992-1997 run for longest ever. The most important part is that Dungey would race it while the riders he has to beat at Anaheim didn’t. Ryan Villopoto raced for Team USA just one time during Dungey’s six appearances. Ken Roczen took last year off. Stewart hasn’t been on the squad since 2008. Dungey actually wanted to bow out last year, but people I’ve talked to said he changed his mind simply because he’s a nice guy and doesn’t know how to say no. Unfortunately, there’s no reward for that if team doesn’t win. "It’s okay that we lost, Dunge, we’re just happy you went," said no one in our comment section.

"Kind of a dream come true day to be picked for des Nations on the MX3 class."

The good thing, the best thing, is that while we didn’t get Tomac or Dunge, we do get three riders who really want to go and are really fired up. There’s an attitude shared by Barcia, Webb and J-Mart, a real take-no-prisoners mentality. Webb and Barcia wear it on their sleeves, J-Mart plays the nice guy but is every bit the competitor behind the scenes. These dudes won’t feel burned out or burdened over there.

"I’m excited for des Nations," Martin said on Saturday. "Obviously last year I struggled with breaking my foot and stuff like that. Definitely pissed off about that. Ready to go back over there and bring it home for America. A good career is ten years, and if I can go there and grind it out for ten years and have an opportunity to represent America, that’s awesome. Definitely want to bring it home. Want to make America proud. It’s a big thing. I just got to say it’s probably one of the coolest races of the year, just because of the fans are so into it. You got the chainsaws and the air horns are louder over there. It’s just cool."

"It’s super special for me," said Barcia, who was very fast in appearances in 2012 and 2013. "I’m excited. I didn’t go last year unfortunately, but I went the year before that and the year before that. We’ve come up a little short—just little mistakes and stuff. I won the overall in the MX3 class there, so I was pretty decent. [As far as being] Team leader, I didn’t think I would be saying that this year, like ‘I’m going to be a team leader at des Nations,’ which for me is an honor. To go represent the USA is very special. I think we have a very strong team. Jeremy’s great. Cooper’s really good right now. Our bikes are definitely strong like Ryan [Dungey] said—they’re rocket ships. It’s exciting. I’m looking forward to going over there. Our team is definitely strong. I know those two guys want to win bad, and I definitely do too. But I think just need to be smart and be consistent."

When Barcia first went to the 'Nations in '12, he raced a 450 despite riding a 250 during the season. Dungey did the same in 2009, leading the team to victory on a 450 after racing a 250 all season. Now Webb is jumping to the 450, and his excitement alone should overcome his lack of experience on the big bike.

"Kind of a dream come true day to be picked for des Nations on the MX3 class," Webb told us. "That was a killer thing for me. It’s unreal."

Webb was so excited about his opportunity that he started riding a 450 two weeks ago once he heard rumors he could be picked. At the time nothing was official, but Cooper didn’t hesitate to dust off his YZ450F practice bike just in case. After Washougal, he even flew to North Carolina to do some testing and riding with the JGR boys. The call from DeCoster came last Wednesday, and he was ready to accept.

“He can ride a 450 from what the Yamaha guys are telling me,” DeCoster explained. “And he is already spending some time on it. I think maybe in the back of his mind he was hoping that we would be thinking about him. He started riding before we mentioned anything to him on a 450.

"Justin, for sure, he is in a place that he deserves to go," continued DeCoster to our Steve Matthes. "Martin, it’s pretty clear also. It was a little bit more difficult with the third rider. Jason Anderson, Canard coming back, but I think first of all Jason has been a little bit up and down. Canard doesn’t have that many races under his belt. He’s probably going to be a little bit conservative. Sometimes he comes back really, really strong, but I think with all the amount of injuries he has had, I would think that he would really play it conservative. Cooper has been riding really good. He had earlier injury from Las Vegas Supercross that kept him away from the Nationals for a while. So he had no more chance to win a championship this year. I think that’s an extra reason for him that we picked him."

There will be many more details to work out for this team. Webb’s Yamalube/Star squad doesn’t race 450s, so the team will have to hammer through JGR and factory Yamaha options to figure out what he’ll actually race over there. And this team represents a major shift in power, as all three riders actually ride for privately owned teams. Star Racing’s Bobby Reagan told me he spent $20,000 of his own money to send Martin last year, and with Webb on board, he’d be in even deeper. He doesn’t care. Coy Gibbs also promised to back Barcia’s effort, although the team will use sponsors to help offset the costs.

"For me going, it’s all Coy," Barcia said at Unadilla’s post-race press conference. "It’s not Yamaha or anything; it’s just Coy. He asked me if I want to go and I said I’d love to. He’s like, 'Yeah, I’ll back it for sure.' We have some great sponsors behind us that are going to help out, like N-Fab and Pirelli and just a lot of great sponsors. Bobby at Star, I know he’s pumped that he’s going to send his guys. It’s not cheap to ship the bikes and ship us over there and do all that. We don’t get a lot of money from the AMA to take our families and stuff. It’s cool to have sponsors that are going to send us over there."

The common thread between this team is the common willingness to go and do whatever it takes. The riders and their teams are 100 percent committed to the effort. It’s not a perfect world, but those chosen for duty will do the best they can to make it look that way.