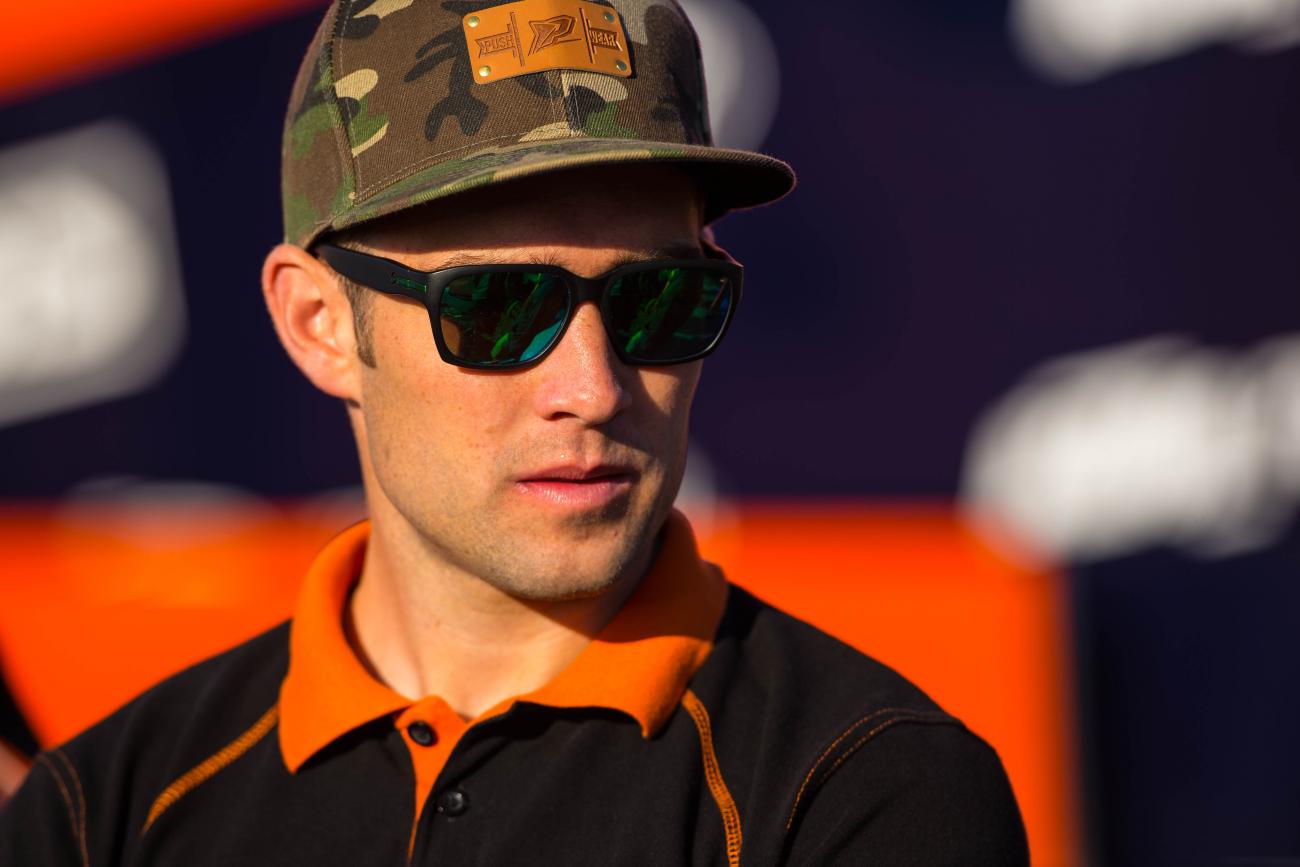 Joey Savatgy won his first career overall at Unadilla, Ryan Dungey extended his points lead with another win, Marvin Musquin closed the gap on Jeremy Martin, Team USA was announced for the Motocross of Nations; however, none of the riders involved in those stories were as happy on Saturday as Shaun Simpson. We talked to the friendly Scot before and after the race, and he was all smiles the entire time. It helped that he rode incredibly well, scoring fourth overall via 4-8 scores in the 450 Class. Here’s what he had to say over in the Red Bull KTM pits when it was over.

Racer X: That was a good ride. What did you expect, and where was it with what you expected?
Shaun Simpson: I wanted to go home with a big smile on my face—that was the main goal. So then put a goal on how I felt I could do, probably two top-sevens, two top-sixes. I was dreaming about two top-fives. So to actually get a fourth overall nearly blew the doors off of my expectations. So I’m pretty happy, to be honest. Fourth and eighth, 4 points from the podium. Wow! That’s pretty impressive weekend. Such an experience from start to finish—from getting on the flight in Belgium to arriving in NYC, driving up here to our hotel, just everything. It’s been such a great weekend. The excitement, the anticipation of qualifying—I’m so happy! I finished the second race and I was like, dang, I have to go home now. The one-day format is good. It’s cool, but I was looking for more. I wanted more.

But as a racer it had to be tough, though, because that’s not a lot of time to get ready, especially compared to what you’re used to.
Yeah, but the British Championships are just a one-day format, so I’m pretty used to that. But the sheer intensity of the qualifying, two laps, green flag, no jumping—all this sort of different stuff I have to take in and take on board was different. But overall we did a great job in the short space of time we had. Big hats off to the Factory KTM Red Bull team for making me feel so welcome here. Pitting right next to them is almost a dream for me. I’m a privateer back home, so it’s been such a great weekend. Putting a bike together for me, something that was really rideable, really close to how I would like to set it up if I get the chance to ride the 2016 back in Europe. Overall just had great fun.

That’s the thing—the bike was different as it could get from what you ride normally.
Totally. We’ve been using a 2015 now. It’s basically the same bike as 2014, so two years on basically the same bike. The factory guys in Europe, on the Factory KTM in Europe, they’re riding a ’16 bike, but I’ve only had minimum time on it. Maybe eight or ten hours, and that’s been purely for testing, not really to set up my own setup. So been working a lot with WP over in Europe to just get something, get it dialed in within the weekend. It’s been pretty cool. It’s kind of outdone my expectations. It’s been cool.

How were the fans? Did people recognize you? Especially getting that win last weekend, were people pretty excited?
From start to finish, everyone here has been so accommodating. Everyone that I’ve seen, everyone that I’ve met, they’ve all been like, “Well done last week. Thanks for coming over.” A lot of the fans were even saying, “Thanks for coming here. We like this different spice of something different.” Everyone’s been super cool. It’s been refreshing to have that sort of motivation. The win last week obviously helped. Everyone’s saying good job in Lommel, we watched that race. It just creates an extra buzz. I feel like I’m leaving here with an extra fan base, and I’m just looking forward to getting back home and hopefully finishing the season strong.

Too bad someday you’ll have to come back down to reality. You had a 1-1, and then you had this, a really fun set of weekends. In racing it doesn’t get to be all-awesome all the time unfortunately.
Unfortunately not, and I know that all too well. I’m happy now, though. I’m looking forward to getting home and getting some work done and finishing the year on top for them.