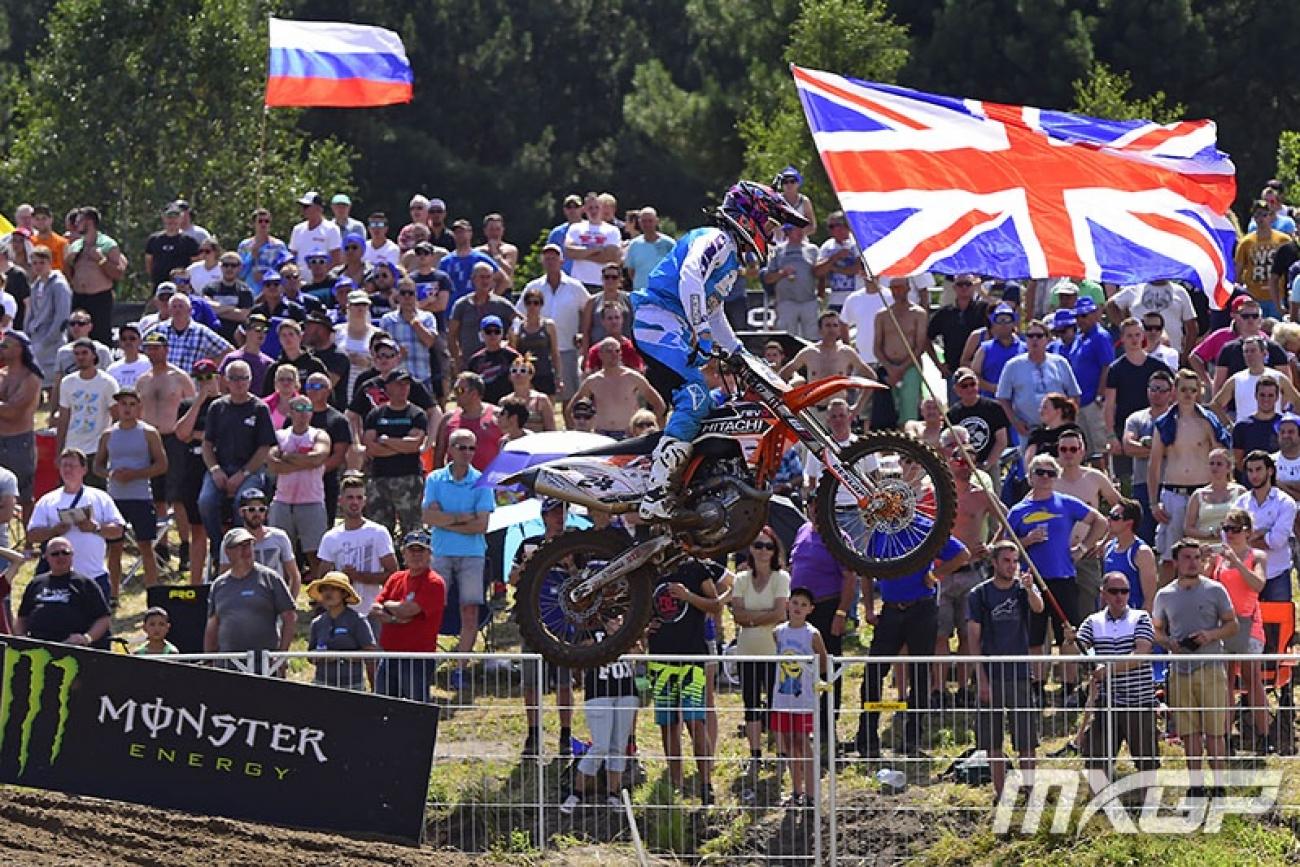 Lommel is a daunting circuit at the best of times, but the preparation of the sand combined with a total of six racing classes meant that the terrain was brutal for the Grand Prix of Belgium, round fourteen of eighteen in the 2015 FIM World Motocross Championship. On Saturday evening spectators were even taking comedy photos of each other, barely able to peer over the sides of some of the vast holes when inside them. On this stage, the Brits battered Belgium. Success in four of the categories meant that “God Save the Queen” might well have been played on repeat for the podium ceremonies.

At the top of the tree was Hitachi Construction Machinery Revo KTM’s Shaun Simpson. The 27-year-old has been in Grand Prix for eleven years, and has spent much of that time living and training locally. The Scot memorably clinched (only) the UK’s second GP win in the premier class back in 2013 as a privateer at Lierop, around 40km from Lommel. He went 1-2 that day, and with slightly better resources this past weekend—but still essentially a privateer—marked the first 1-1 of his career (with pole position to boot) with superiority in the sand that was astonishing.

The #24 will turn into #274 when he flies to Unadilla this week for a wild-card outing with the backing of the KTM factory. Simpson signalled his worth to the Austrian giants with this performance and result, as not a single member of the Red Bull KTM squad made the motos (Ken De Dycker is rehabbing from shoulder surgery, Tony Cairoli is out with an elbow fracture, and Tommy Searle pulled out of the GP on Saturday with a ribcage problem).

The British Champion—who incidentally is unbeaten in the UK series after six of eight rounds and stands on the threshold of a comprehensive title defence—interrupted a title dispute between Yamaha Factory Racing Yamalube’s Romain Febvre and Team HRC’s Gautier Paulin’s.

It was Febvre’s first time tackling the Lommel sand on a 450, but he is also a Lommel resident and, like many GP riders, uses the facility for training and testing (several teams are also based in the region). Reports from his peers prior to the Grand Prix had many commenting on the speed and proficiency of Febvre, who slightly bungled the GP of Europe at Valkenswaard in April, leaving many questioning whether he could deal with the terrain. Febvre cut a frustrated figure at the end of the day. Two crashes in the first moto saw the 23-year-old expel a lot of energy, and he trailed Paulin to the flag in third. His countryman on the factory Honda had his own difficulties, as a sore right knee due to his crash in the second moto last week in the Czech Republic meant that he was also compensating. Simpson escaped with ease in the opening sprint, but it was Paulin who tried to make a break in the second. The #21 machine bobbed and weaved through the lines, and together with the #24, the two became the only bikes to clear the jaw-dropping quad; nobody else wanted to take the risk, but the leap was worth a second a lap. Paulin tried to break free of Simpson, but couldn’t shake him. Febvre was distant and at some stage slipped into championship mode to safeguard a best-possible points haul for the day.

Once he had taken the lead, Simpson experienced his second dramatic moment for the day. He had earlier been unable to take part in warm-up with his race bike developing an engine problem that had father/mechanic Willie scratching his head and performing a rapid overhaul. On the track, with three laps to go, the quad landing finally caught Simpson out and he crashed. His eight-second lead started to deteriorate, but he picked up and resumed without problem. Simpson may have moved up to sixth in the championship standings and is only a few points away from the absent Max Nagl for fifth (proving the value of regularity and presence) among all the factory bikes, but Paulin made a small chip in Febvre’s plight for a rookie championship by reducing his advantage from 88 to 84 points with four rounds and 200 points still available.

The second wave in MXGP was headed by Evgeny Bobryshev, the Russian gunning for a top-three championship finish at this rate. Rockstar Suzuki’s Kevin Strijbos was fifth and disgusted with his performance, even going so far as to say he was “ashamed” of his and his fellow Belgians’ lack of ability to figure for success at the quintessential Flemish racing course. Jeremy Van Horebeek followed in sixth to further illustrate his point, and the Yamaha man claimed he was dealing with a back issue. A crash in the second moto for Latvian GP winner Glenn Coldenhoff capped a disappointing run in which the Dutchman admitted that the sand was just too heavy for him on this occasion.

Rockstar Suzuki’s Clement Desalle, who felt his troublesome right shoulder again pop out through over-jumping the finish line tabletop on Saturday, was on the injury list. For the third year in a row the luckless Belgian will spend a winter rehabbing from an operation. Steven Frossard was also inactive after a minor operation to remove a piece of meniscus from his right knee.

Monster Energy DRT Kawasaki’s Max Anstie added to the British bounty with his second MX2 win of the season and his second in a row at Lommel, further cementing his reputation as the second-best sand rider in the class. Jeffrey Herlings’ lead at the top of the MX2 standings was left there bobbing like a floating carcass to be picked at by the little sharks all vying for the 2015 crown, and there are still six in contention after Lommel. Anstie, like Simpson, was all-dominant with pole and 1-1, and was even more invincible than his 2015 Motocross of Nations Team Great Britain teammate, as not a single athlete managed to put a wheel past the Kawasaki all day thanks to two holeshots and a Herlings-esque degree of authority.

Sole Red Bull KTM runner Pauls Jonass was the picture of consistency with a 2-2 and enough points to overtake the off-song Tim Gajser and rise to the peak of the championship. The 18-year-old Latvian and factory rookie thought it would take “another two years” before he had the red plate, but now his #41 machine has become the new target. World Champion Jordi Tixier was disappointing with a 7-12 finish, as was Standing Construct Yamaha’s Valentin Guillod, who picked up a DNF in the second moto when he crashed into the prone YZ250F of Brent Van Doninck on the opening lap.

Jonass has 433 points. Anstie—who must be cursing his mistake and crash while leading last week and losing 25 points from his total—is down in seventh in the standings, but just 46 away from the KTM man. Simpson and Anstie’s accomplishments complement more success for the UK with Jack Bintcliffe winning the EMX150 series and Brad Anderson taking honors on his YZ250 in the EMX300 two-stroke championship for the second meeting in a row.

It was interesting to see Ryan Villopoto back in the paddock, still looking trim and coping with the myriad of enquiries about his thought processes over the last two months. He appeared in the Saturday press conference for the event and also in the MXGP Studio TV show where he faced some questions from fans on Twitter and also from commentator Paul Malin. When asked if he thought he misjudged his level of preparation for MXGP, RV admitted that perhaps he should have considered a pre-season international race. He also countered a claim that his move to Grand Prix was influenced by money. The show is worth a watch:

There has been some speculation over the second factory ride at Suzuki. It is widely accepted in the paddock that Clement Desalle will be moving on and is linked with the Monster Energy Kawasaki team for 2016. With Kevin Strijbos confirmed on the RM-Z450, the works crew are looking for a name rider—with most of the top MXGP athletes already set—and it will be curious to see if their catchment net stretches across to the U.S. There is already a rumor that it elasticises as far as New Zealand.

Speaking with Thomas Covington, it looks as though the 18-year-old will be attempting a third MX2 season in 2016 and could be switching teams. Aside from the flyaway events, the Alabama native has struggled to place inside the top five for most of the campaign, and a change of teams could well be the catalyst for a turn in fortunes. His first moto in Lommel was wrecked by a crash that led to a blocked radiator. The second race was more effective, and with tenth-place he admitted that the result “felt like a podium.”

Due to the cancellation of the Grand Prix of Brazil this month—and its replacement by the GP of Lombardia—MXGP finds itself with a respite of dates and two free weekends until the series heads to the sands of Mantova, Italy.