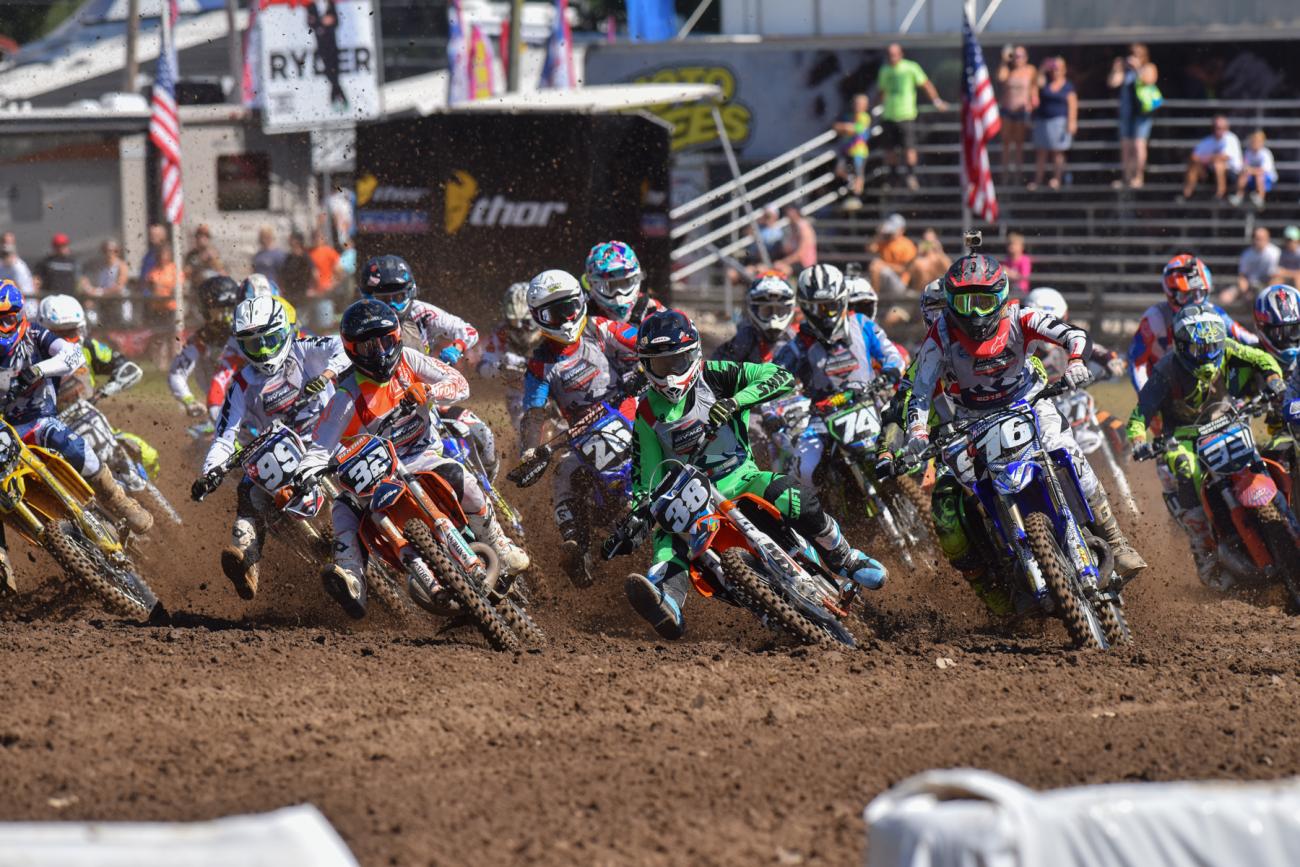 Sebastian Tortelli surely isn’t the only rider of the more than 1,400 entries making there first trip to the Loretta Lynn Ranch—but he might just be the most famous. The two-time world champion had always dreamed of coming to the world-renowned amateur race, placing his name amongst the legends that made their name at the fabled racetrack. He wasn’t just here for fun, though—he wanted to win.

On an atypical breeze afternoon, a small group of fans lined the fence around the podium. It surely wasn’t the only time chants of T-O-R-T-E-L-L-I reverberated around a podium. Heck, it was maybe even the smallest. But this one seemed to mean much more. Tortelli outlasted one of those riders that made their name famous in the small town of Hurricane Mills—Robbie Reynard—to capture the second moto win in Vet 35+, his first ever win at Loretta’s, putting him in line for the overall with 2-1 motos compared to Reynard’s 1-2 scores.

Tortelli has already made his name—in Europe and America. Loretta’s is a just another bullet to check off. For Austin Forkner and Chase Sexton, this week is much more pivotal, as they try and make a bigger name for themselves. The duo from the Midwest (Forkner, Missouri; Sexton, Illinois) have been the class of the B Class this week, engaging in an epic duel in the second moto—and then again in Open Pro Sport. Forkner, who recently struck another deal with Team Green Kawasaki, gained the advantage in 250 B, winning the second moto when Sexton, after making a late push, made a mistake on the final lap, putting him in position to claim the overall behind 1-1 scores. Sexton bounced back to claim the win in Schoolboy 2 (13-16), but Forkner is line to take that overall as well, as Sexton was a DNF in the first moto. If you’re looking for the “next,” you may want to remember the names Sexton and Forkner—they will be around for a while.

For more from the third day at the Ranch, check out the race recap from MX Sports below.

Hurricane Mills, Tenn. - The 34th Annual Rocky Mountain ATV/MC AMA Amateur National Motocross Championship presented by AMSOIL continued today with the second set of motos at the notable Loretta Lynn Ranch in Hurricane Mills, Tennessee. The Ranch is known for sizzling temperatures, but a drop in humidity combined with a breeze set up perfect race conditions.

Lance Kobusch immediately jumped to the front in Super Mini 1 (12-15), but he fell back to third in the "Ten Commandments" by Derek Drake and Garrett Marchbanks. For the first few laps there were constant lead changes as all three racers swapped positions for the top spot. After suffering mechanical issues in the first moto and finishing thirty-sixth Drake demonstrated that he belongs at the top of the pack and finished second, right behind Marchbanks who stood atop the podium improving on his second in the first moto. Lance Kobusch rounds out the podium in third.

Right after the esteemed Super Mini division, the quickest females in the Nation took on the legendary race track in the Women All-Star and Women (14+) section. After a disappointing first moto for Kylie Fasnacht, who finished seventeenth, she proved that she belongs in the front of the pack by pushing from seventh on the first lap to take the win. It wasn't an easy rise to the top because Mackenzie Tricker and Kaitlyn Morrow were busy battling it out in front, but on the sixth lap Morrow bobbled near the mechanics area opening up a position for Brandy Richards. The podium would end up being Fasnacht, Tricker, and Brandy Richards.

Simultaneously the Women (14+) stager started with Gracie Van Horn claiming the Bell Holeshot Award, but she could only hold on to the top spot for one lap before Jordan Jarvis took over. Jarvis, Van Horn, and Annie Wernig hold the top three spots in moto two.

Austin Forkner continued his dominance in 250 B by claiming holeshot and never looking back, he instantly pulled a large gap over the entire class and that gap eventually worked in his favor because Chase Sexton was seen charging hard focused on the pass. Unfortunately Sexton bobbled right before the finish line during the white flag lap allowing Forkner to keep his lead and win, and the podium was a repeat of moto one with Forkner, Sexton, and Cantrell.

The second moto for 250 A was a shakeup from the first moto. Yesterday's winner Mark Worth had a case of bad luck and found himself in ninth place. Mitchell Harrison tried to claim the top spot on the podium by grabbing the holeshot, but was passed on the second lap by Tristian Charboneau who looked like he had the race wrapped up until going down in the mechanics area. This left time for Mitchell Harrison to sneak up into first place, but Josh Osby wasn't able to make the pass for second allowing Harrison to take the win, Charboneau in second and Osby in third. Harrison has now went 2-1, which puts him in the position for a National Championship if he can keep on in the third moto.

Charboneau looked for revenge in the 450 A division, but fell short again claiming another second place. No one could stop Bradley Taft as he worked his way from fourth to first, Darian Sanayei tried to hold him off, but eventually the race ended with Taft, Charboneau and Sanayei.

The Girls Sr. (12-16) was a replication of the first moto with Hannah Hodges, Jordan Jarvis, and Jamie Astudillo, yet in the Girls Jr. (9-13) it was Jazzmyn Canfield, Karly Morgan, and Tayler Allred. In 250 C Levi Newby took home the gold, Richard Taylor the silver, and Salvatore Cusimano the bronze. Haiden Deegan, Sam Garroutte Jr., Emile Lacher, and Canyon Richards were all victorious in the 51cc classes.

The 250 B Limited class brought the excitement to the table as many on-course battles took place, which included Jake Masterpool working his way from tenth to fourth and then eventually he made the move around Cole Barbieri for third. Right after securing the position Masterpool took a hard hit which would leave him finishing up in last place. Joey Crown, Enzo Lopes and Michael Mosiman found themselves the top three finishers.

During intermission multi-year National Title holder Aaron Plessinger made his way back onto the historic course along with Phil Nicoletti to demo the new 2016 Yamaha race machines and the nighttime activity included up-and-coming country music artist Seth Ennis in concert.

Second motos wrap up and third motos begin tomorrow, Friday, July 31 and RacerTV continues with live streaming coverage beginning at 11:30 EST/ 10:30 CDT. Thursday's achieved coverage is now available on RacerTV.com, to view the racing action from day three please click here. Complete results from the 2015 National Championship can be found here and Live Timing and Scoring can be accessed here.