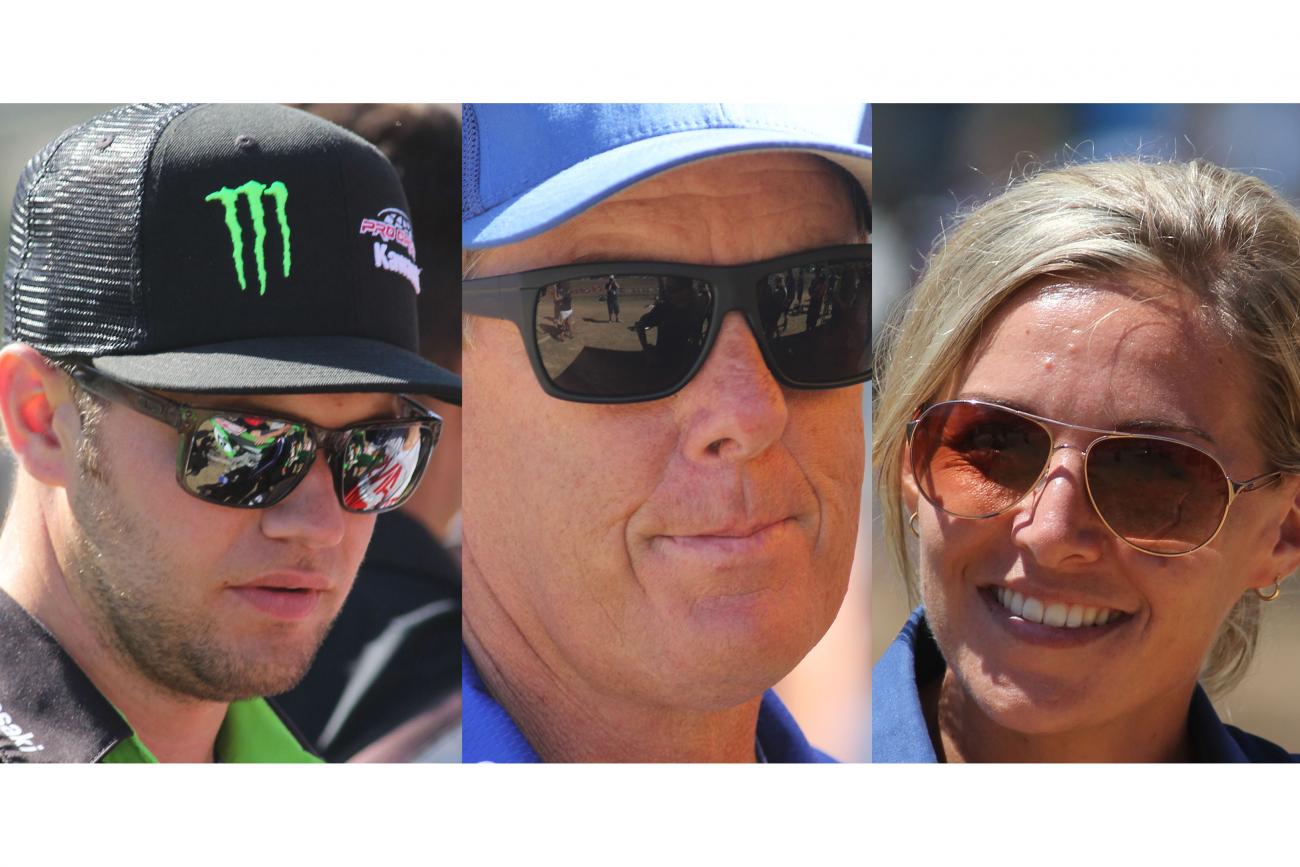 3 on 3 The Amateur Bosses

It’s complicated to hire an amateur kid with hopes that he’ll be a superstar pro as an adult. What do they look for? At the Rocky Mountain ATV/MC Amateur National at Loretta Lynn’s, we tracked down three amateur team managers to find out. Here’s Christy Lacurelle of the KTM Orange Brigade, Ryan Holliday of Kawasaki Team Green, and Donnie Luce of Yamaha’s Blu Cru.

1. How has the recruiting process changed in the last ten to five years?

Christy Lacurelle: It is a little different, for KTM specifically. We were out of it [amateur] about six or seven years ago when the economic crisis hit, and we just got back into about five years ago with the Orange Brigade. For us, it’s been a slow build up to the top, and while we look a lot at results, it’s more of a scouting process for us—send us your resume type thing. We go to the races, so we know who these kids are, and we don’t just base it off one event—we base it off the course of the year. And then comes the attitude. You watch a lot when kids get off the track when they have a good moto or a bad moto and you see how they react to both. You see how they’re probably going to act in the future when they’re going for a championship in a twelve- or seventeen-race series. And of course having a good family support group behind them, that helps a lot in amateur racing—they’re getting them everywhere they need to be at this age. So you definitely want to make sure they have a strong foundation there.

Ryan Holliday: I think there has always been competition, and there always will be competition, but there have been some kids that were successful early and came through the amateur program and were successful early as a professional. Then people saw that it worked, and then I think people start to think that’s the automatic thing to do now. But now I also think you’re seeing that it doesn’t always work. By making that guarantee early to an amateur, to place them on the professional team based on results [at an early age], it is no guarantee for future success. It’s a bit of a bummer, in my personal opinion. I would love to see the kids get down here [Loretta’s] in the A Class and battle it out and really see who the best guys are and not have everything be decided three years before they turn pro. It’s a difficult situation, for sure.

When I came here for my first year [working for Team Green], we had Dean Wilson and Blake Baggett that both won 250 A and 250 Pro Sport titles and didn’t have professional rides [guaranteed at the time]. And here we are six years later, and you have kids twelve and thirteen years old coming out of the Super Mini class, and they have pro deals locked up. It’s a tricky situation and it’s headed in a scary direction, for sure.

Donnie Luce: For me, it’s largely been the same. We work really hard to find those kids that are maybe a little bit under the radar and maybe aren’t quite developed and bring a package to them in hopes that they can develop into the rider we think they can be. There are a lot of riders out there that don’t really get those opportunities. So we try and do our due diligence and make sure we get the right riders and hopefully develop relationships with our dealers to help keep them involved in our program.

It’s definitely different when coming into the pro ranks because we have to have somewhere for them to migrate to. We have a great relationship with Star Racing, and they’ve done a great job helping us build those future stars.

2. Results are a big priority, but what else are you looking for when evaluating a rider? You also have to deal with families, and social media—does that play a big part?

Lacurelle: You have to take it into consideration because the families are the ones that get them there. For KTM, we have an Orange Brigade camp—an east and west one—and we help get the families there, but if the families can’t take off work or get the kids there, we wouldn’t be able to do those things. And they do that for us because they see the importance of our program as well as actually going to races. So it matters a lot if the parents are into it and how dedicated they are. Also, how positive and negative they are for the kid as well—if you have someone that is negative all the time, that can affect the rider in the long run. So we really try and create a positive energy amongst our families. If you’re at any amateur event now, you’ll notice a lot of the Orange Brigade families pitting together because they have formed a bond over the years and it’s created a new atmosphere for us.

Holliday: When you’re dealing with kids, there is a lot to look at. You’re trying to find and figure out as much as possible about them and their families and their surroundings and how they go about their business because all of those things will affect their career down the road. You to take as much into consideration as possible. So it’s not just, “Oh, he’s the fastest guy.” Well, he could be the fastest guy, but their lifestyle and everything around them could be a train wreck, which will hurt them down the road. Of course, there is a lot to look at outside race results, and I think the family is probably the first and foremost thing you consider.

Luce: You have to look at the whole package. Racing on the track is a high priority, but also how they conduct themselves. I can’t say I spend a majority of my time on their Instagrams, but we do follow all of our riders to try and see what they’re doing. Sometimes I learn a little bit more about the rider because of what they are posting.

3. How important is it to let them be kids on social media and stuff, and having fun with their friends, but also represent your company in positive light? Is there a certain line that’s drawn? Do you keep an eye on their social media accounts?

Lacurelle: We obviously follow them on social media and stuff, but we haven’t ever had an issue with a rider yet. We talk about it at our camps and other times throughout the year—how you should promote yourself. With that direction, no one has made any massive mistakes.

Holliday: I think you let them be kids first and foremost, because that’s what they are. They’re kids that happen to race dirt bikes. It goes back to the family thing—you hope that the family has instilled in them to be a good kid and do the right thing. If something does come up where they make a mistake and do something a little out of line, then, yeah, we’ll mention it and straighten it out. Fortunately, we don’t really run into that problem.

Luce: You have to let kids evolve, one way or another. I think all of them are already getting good advice from their parents, and we just make sure they have some minimum guidelines to stand up to.