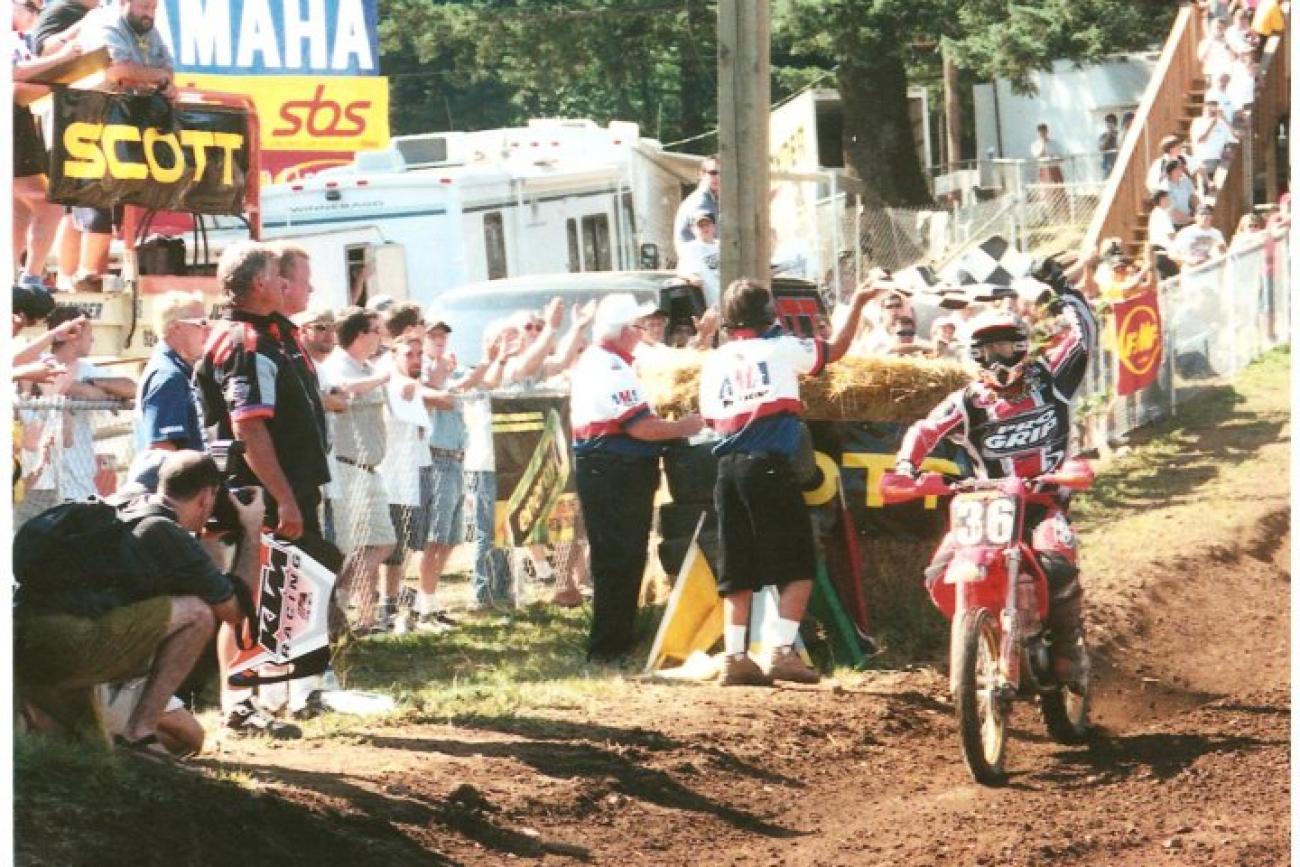 Where Are Jason McCormick

In his first year as a pro in 1993, Jason McCormick set out to make a name for himself on his #184 Honda CR500. Traveling with his life-long friend and training partner Ryan Huffman, McCormick finished tenth overall in AMA Pro Motocross in the 500cc Class and established himself as a contender.

Just a few years later, in 1999, McCormick accomplished a major feat, becoming one of the few racers to win a national moto. McCormick accomplished this by winning the second moto at the 1999 Washougal 125cc National. And while Brock Sellards won the overall that day, McCormick’s win and subsequent third overall (via 5-1 moto scores) were major highlights for the Pacific Northwest crowd. McCormick’s accomplishment was even more significant in that he straight-up outrode and beat one very fast little red-headed kid named Ricky Carmichael.

McCormick hails from the town of Vancouver, Washington, which is only a few miles up the Columbia River from the famous Washougal track. With the 2015 Washougal National just wrapping up, we thought we would look up the now-retired hometown hero and find out what he’s doing.

Racer X: Jason, thanks for chatting with us. What are you up to?
Jason McCormick: Well, mostly just living the family life thing. I am married and raising two awesome kids. I also own my own suspension company, and I’ve been working to grow that business up here in the Pacific Northwest. So I still go to a lot of races, but mostly just the local stuff up here, as I work with and support quite a few of the local riders.

I had no idea you were in the suspension business—that is very cool. Tell me about what you guys do.
Well, it’s called JMR Suspension, and we work on primarily all dirt bike and quad suspension. Of course, motocross is our primary tuning section, but we can work on any type of power-sports suspension. The business is all encompassing and takes a ton of time, but it’s an extension of what I was already doing, so I don’t mind the long hours.

Oh, yeah, and one other thing—I also am working on doing a training academy here at Washougal with my friend Ryan Huffman. We’ve done a few camps over the last several years, and those seem to be pretty popular. We’re working on maybe growing that a bit to something more.

I know Ryan’s parents own the track there, and he is pretty much running it now. But you guys go way back, right?
Yes, we do. He’s like family to me, or more like a brother. We are now both in our forties, and things are different, but we grew up racing together coming up through the ranks. We’ve grown up together and worked our way up through the results, and we were always very competitive together and pushing each other. And now, since I started riding a little bit for these camps, we’ve been having a great time. We are older in age, but things still feel like they always have, which is fun.

Who are some of the local guys who you are doing suspension for?
My main riders are Austin Black, Levi Kitchen, Chase Reed, Austin Ulrich, Max Harris, and Dean Spangler. Those are just a few, as I work with a ton of other guys, but those are maybe the primary fast guys up here.

How did you get into tuning suspension? Most riders starting around your generation were not known for working on their own equipment.
Well, we didn’t have much money, and I was always good with my hands. But backing up a bit, I retired in 2005 and got married. I was really good friends with the guys at RG3, and I was looking for something to do. So I worked with those guys at first doing both testing and building of suspension. I then started a local division of RG3 at Motorsports of Hillsboro, and then hooked up with the MotoConcepts guys just as they were getting going. So then I was doing a ton of race team stuff, and it allowed me to create my own name and start my own business, which was in 2010. So now, we are in 2015 and it is crazy to see how far things have come.

How is business?
I’m very happy with how things are going—no complaints at all. Well, maybe that I work too many hours, but that is a good thing. It’s pretty much just me in the shop, but when things get real busy my friend Dave Riggs comes in to help. Dave was my wrench back in the day, so we have some history. But sometimes things are so busy I will stay in the motorhome at the shop and not even go home. That part of running the business is tough, but the good far outweighs the bad.

Let’s talk about your career—you first made a name as a 500cc rider back in 1993.
That’s right. I turned pro in 1993, and we loaded up Ryan’s box van and went off to the Nationals. My dad was our wrench, and I pretty much raced right through the 2005 season. It was a good run, and I had everything from a full privateer experience all the way to a ride where I was paid a salary and flew to the races. It was a good run. Back around 2003, I started to feel that the fire was going away and I was forcing myself to do stuff. I found that racing had started to be work and it just wasn’t fun like it used to be. So when that happened, I knew I should slow down and find the next step. Then in 2005, I started doing testing with RG3 and some stuff with Bills Pipes, and that led me to the next step.

What were some of your career highlights?
Well, earning that ride with the FMF team in 1998, that was a special moment for me. Then for 1999 and 2000 I got a ride with Plano Honda. So it was three years of full support and some factory stuff from Honda, which was amazing. There were a lot of people who helped along the way though.

One thing that sticks out in my head: It was really hard at the time for me, as my father passed away back in 1997. He was a big help in my racing, but he passed away around the time of the first national, which was then held at Gatorback. I was 20 years old and was pretty messed up over it. I was thinking I was going to just quit and no longer race. Well, Doug Henry invited me out to his house to ride and train with him, and I think to try and help me get my head back together. I had this box van my dad and I had built—well, it wasn’t a box van; it was an old airport car rental shuttle bus, and we turned it into a race van. I drove it all the way to Connecticut; it was just me and my dog. I got my head together and then went out and finished as top privateer that year in the 250 Class while living in that van with my dog and hitting all the races. I was in a bad place at the start of the series, but I got things turned around by the end.

Your win at Washougal—where does that rank on your personal accomplishment list?
Oh, I would say pretty much right there at the top! That year [1999] was really good, though, for me. Everything was clicking and I felt really happy with my riding. What I think a lot of people don’t know, or forget, is that I had two other near wins. The first was at Budds Creek—I was leading in the mud, but my motor blew up. I felt like I was going to win that one. Then, at Unadilla, I was also leading, but let off on the last lap, as I thought Ricky [Carmichael] was further behind me than he was. So he passed me on the last lap. It was a total mental mistake on my part. I could have had that moto won. So then when we got to Washougal and I was out front again, I was on a mission. I charged that whole race and never let off, and was just pulling away from the pack. Ricky was faster than everyone, but he got a bad start. I had a good race, and he couldn’t catch me. There was no way I was making the same mistake. In fact, at the finish, I was so far out front, I think Ricky didn’t even know someone was ahead of him and he thought for a second that he had won the race—but then he saw everyone crowding around me and realized he was second. At least, that’s what I heard.

You spent a lot of time as a privateer rider, but you also had some paid rides with some big teams. How was the money for you?
It was average I would say. I didn’t have any big contracts, but the race bonuses were really good. I could do well with those. I did make a good income, but certainly not enough to retire from. But I was able to put some cash away and was happy enough to have a few years of a paid rides with Honda. I didn’t have an agent or anything, and I did all the contracts myself, so that helped when I ran my own team in 2001 and onwards.

That’s right—you had your own program for a few years. What was it called?
Yeah, it was like a mini version of Chad Reed’s program. It was sponsored by Pro Caliper Motorsports and Suzuki. We had maybe one hundred grand or so of funding, and I went out and found some other sponsors, and it was good deal there for a few years. I even had other guys that rode for me, including Danny Carlson and Isaiah Johnson.

Tell me about your family life today.
Well, I’m married to my wife Karie. We still live in Vancouver. We met through Danny Carlson back in 2000 or so. We have two kids—my son Eli is 14 and my daughter Ava is 7. We go to the local races a lot for my business, but neither of my kids is really into racing. My son is really into skateboarding and riding the scooters on the ramps.

How is the local racing scene up in your area?
It’s pretty good actually. We usually always go out to PIR [Portland International Raceway] on Thursday night and see everyone out there. They’ve had that program going for such a long time, so they get a good turnout. We also attend every event at Washougal as well, including the practice days and the race days. So I would say the local racing up here is pretty strong for sure.

Is there anything else you want mention?
Well, I just want to say a big thank you to Ralph and Carolyn Huffman. They really stepped up and helped me out both before and after my father passed away. They even helped me pay some bills back when I was struggling to make money at it, so I really have to thank them. It’s great to still be involved with them at the track, and to be part of something where there is so much history.