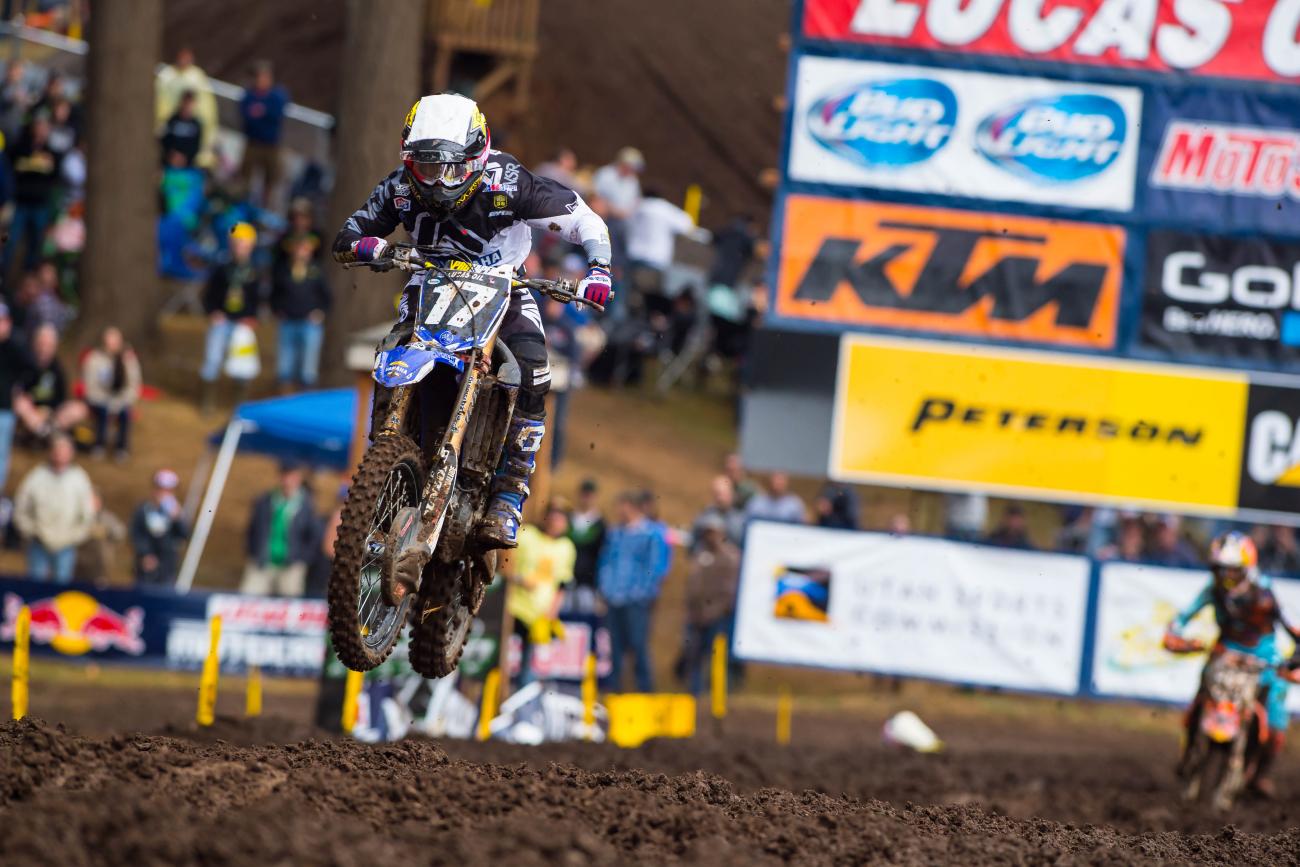 Yamalube/Star Racing Yamaha’s Cooper Webb has stuck himself right in the middle of an intense championship battle between his teammate Jeremy Martin and Red Bull KTM’s Marvin Musquin. An early season injury took Webb out of the championship, but he has made his presence known late in the season, winning the last two overalls. He talked about his day in the post-race press conference.

Racer X: Paint the picture for us and give us the overall of the day.
Cooper Webb: The day was good. Practice didn’t go very good for me, but we made some bike changes. I got a really good start in the first moto, which is nice. I was able to lead the majority of it, and then had a goggle issue, had to pull those and Marvin [Musquin] got around me. We got a good aggressive battle going. Just came up short, and it was a tough one.

In the second moto, we got another really good start behind Jeremy [Martin]. I ended up making the pass around them. Then he made his way around me, and I just tried to stay with him. I knew he had some better lines, but it’s hard to be out front to switch up your lines like that. Next lap he made a mistake, and I was able to hold on and got a nice solid win.

After moto one we heard you on the podium saying, “I got something for him.” When you’re talking that kind of hard-edged talk, is it motivation more for yourself, or are you trying to get into your competition’s head? Or is it both?
I think it’s a little bit of both. I love aggressive racing. I love batting, but when it’s over a jump, that’s a little different. I was ticked off, and maybe it just runs in us North Carolinians, but I guess I just get fired up like [Damon] Bradshaw. I was definitely just a young, dumb kid running my mouth, but I did apologize and we talked about it.

Overall, you’re only three races back from your foot injury now. Obviously it’s feeling okay. Is there anything going on down there at all?
No, I’m 100 percent.

You catch a little flack sometimes for speaking your mind, but we all know it’s nothing that nobody else does. You just happen to say some of your stuff publicly. Does it bother you that you get grief for saying what other people say behind closed doors?
For me, like I said, just growing up, and the way I’ve always been is, I like to tell it how it is. I’m here to race and do a job and win. I know a lot of other guys are a lot better at holding in their emotions and anger. Unfortunately for me, I always feel like I get beat in the worst ways. But it is what it is. It’s racing. Like I said, when we dedicate our life and everything we do around this sport and stuff like that happens, well, it is what it is, whether you like it or not. I’d rather be real with myself and real with everybody else than holding it back and being known as a nice guy.

This is the first time that you’ve come back from injury mid-season in your entire career, correct?
Yeah. Luckily for me I’ve never gotten hurt. To come back, we definitely have. In my opinion I didn’t rush it, but a lot of the team and everybody thought I did. They actually originally wanted me to wait until Millville. But I knew what I had, and I knew racing fitness was going to come. I felt like racing is the best practice and there’s no substitution for that. Even with testing and everything like that, our practice bikes, you can only get them so good at a practice track. You don’t get paid to practice; you get paid to race.

What is your plan and what’s going to happen for the next two weeks?
For me, probably maybe take Sunday and Monday off and then go right back to riding and testing. Like I said, I’m still kind of getting back into the swing of things. Everything’s going really well, but I feel like I need to work on a little speed and the bike a little bit. The bike’s unreal, but with the tracks coming up, it’s pretty important to have your bike dialed in. Just try to find that magic setting.