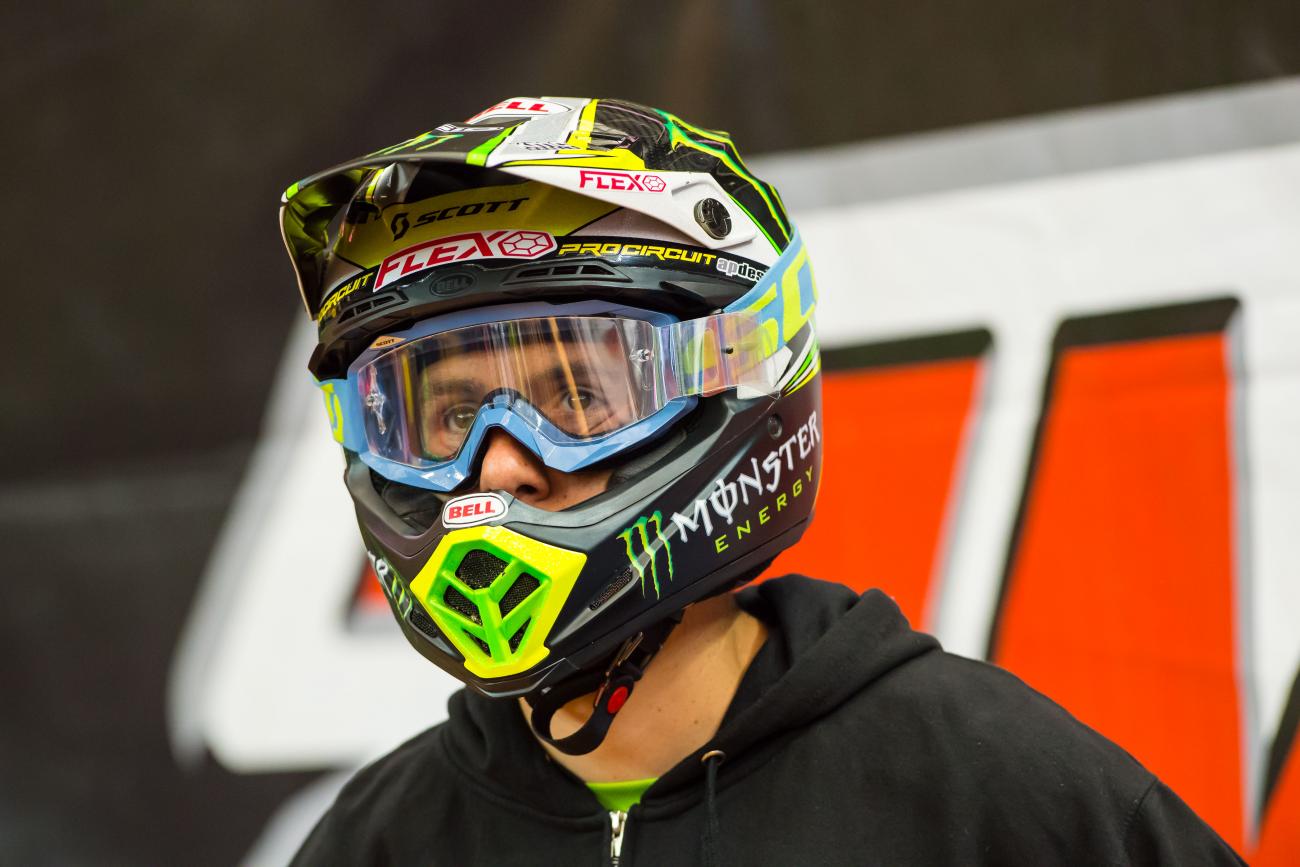 After a series of frustrating starts and stops precipitated by health issues, it all finally fell into place this week to where Arnaud Tonus will be able to take his place behind the starting gate at Washougal on Saturday, and in doing so, make his American premiere in the Lucas Oil Pro Motocross Championship. A member of the Monster Energy/CLS Kawasaki team in 2014, the Swiss-born rider was a consistent podium placing racer during the FIM MX2 World Championship Series, and despite an injury suffered mid-season while chasing after Jeffrey Herlings, was able to broker a deal with Mitch Payton to compete in the United States in 2015. Plagued and haunted by a prism of issues that kept the affable rider off the bike, Tonus’ abbreviated run here (up to now) has consisted of three Monster Energy Supercross 250SX East Region main events. But that was then and this is now and on the majestic evergreen lined Pacific Northwest circuit, the 24 year-old plans on showing the American fans what he’s all about. On the eve of the ninth race of the series, Racer X checked in with Tonus to get a read on both where he has been and where he hopes to be going.

Racer X: Arnaud, we’re happy your back to racing. I’m going to take a wild guess here and say you are too.
Arnuad Tonus: Yeah, finally. That’s the cool thing. I’m really happy. I had some tough times, but it’s definitely cool be back on the bike and racing.

Have you been to Washougal before?
No, I’ve only watched it on TV. I’ve never been there. Honestly, this is the first outdoor I’m doing in the U.S. so I’ve not seen many tracks in real life. Washougal seems to be a hard pack track compared to what the guys have been on so far; it looks a little bit more European style. It should be really cool to race on.

Maybe not so different from the tracks in Switzerland, huh?
Yeah, that’s what they said. The land looks a little bit like home to me with all the trees. We’ll see. It looks really cool and I’m looking forward to racing there and having fun.

You haven’t raced since the second Atlanta round back in February. Has it felt like you’ve been off for an eternity?
Yeah, it’s strange. It’s hard in the beginning to accept what’s going on, especially this year for me because I moved from Europe to California. I put everything together to come here and train all winter and then to be off for so long and to be so far from home, it was tough. I was lucky because my girlfriend was with me. It was tough but I think that you learn a lot from this kind of experience and it just makes you a better person. In a way, it can be positive, even if it is a tough time. You grow up from this kind of thing.

I have kind of a new body to learn. That’s why all this is a little bit weird and why I don’t expect so much. That’s why I just want to go out there and build on these races at the next few rounds.

How is your overall health? Is everything in order now?
Yeah, with this kind of virus it’s really hard to tell. It’s not in my blood anymore but it takes time to rebuild everything and to get back to the intensity of training and riding. That all took me time. With the Epstein-Barr virus, it really puts you down. The hard thing is that you never really know how long it will take or how it will heal. All the doctors pretty much have the same opinion in saying they don’t know everything about it and that everybody is different with it. It can take six months or three months or two years to get better. You don’t really know. The hardest part is that you can’t do anything for it because there isn’t really a treatment for it. In the end you just have the body heal and recover. I’m good now. I won’t say I’m 100 percent because I think it will take a bit more time, but I’m good to race. Physically, I’m pretty good. I just hurt my shoulder two weeks ago. I had first planned to come back at Millville, but I hurt my shoulder so I was off the bike for over 10 days and I had to deal with all that. Now, I’m pretty good physically and I’m good to ride on the bike and race. I won’t say I’m 100 percet, but I’ll get there pretty soon.

What have thought of the outdoor season thus far? Any specific observations that come to mind?
Well, it’s pretty much what we expected. Like, Jeremy Martin and Marvin Musquin are dominating the championship at the moment, but I think those guys are a little bit detached from the pack. You can see that behind those two guys there are a lot of top three guys that are all at the same level, I think. That’s nice. You can see that a lot of riders are really fast and are able to be on the podium so it makes the championship exciting. That’s the cool part: that there are so many riders who are able to get on the box. I think it’s pretty cool to watch and now it’s time for me to race and I’m looking forward to it.

Are you confident that once you get your speed and confidence to where you want them that you can be a consistent podium finisher?
I think it’s hard to say. I know what I can do, for sure, but I’ve never had the type of experience I had with those viruses. I have kind of a new body to learn. That’s why all this is a little bit weird and why I don’t expect so much. That’s why I just want to go out there and build on these races at the next few rounds.

What’s the plan for the rest of the year? Obviously, you’ll do the next four Nationals, but are there any additional races you hope to run in the near future?
I would love to do the GP at Glen Helen and hopefully the des Nations, but nothing for sure so far because with Mitch [Payton], he really wanted me to these outdoors first. From there, we’re going to see what’s going to be next. We haven’t really looked ahead that far because it was kind of hard to see where I was with my health and all that. So now I’m going to do these outdoor races and then we’ll see if I can do the GP, the des Nations and Monster Cup. I really hope I can do them because it’ll be really cool for me.