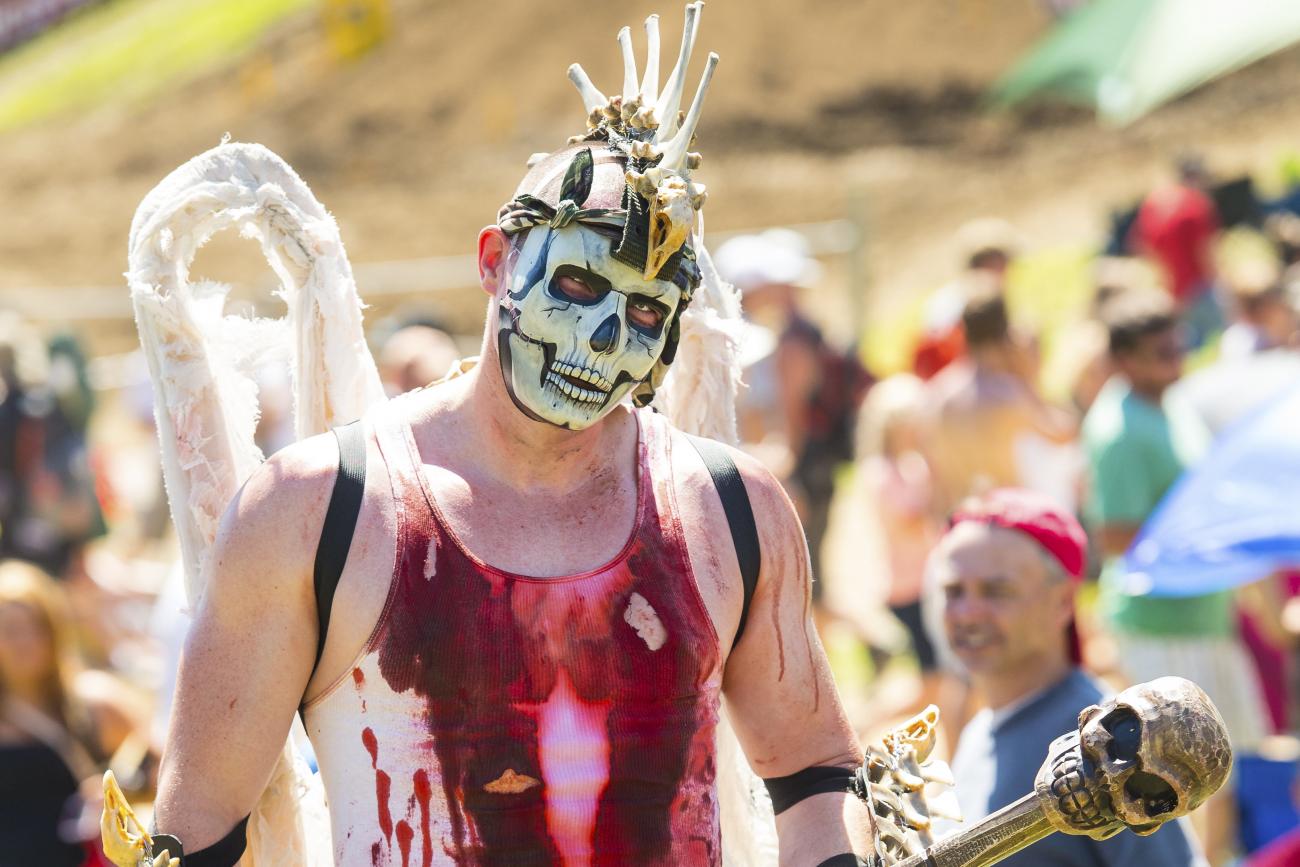 We already knew the NFL printed money. This week we found out how much teams received from the NFL revenue-sharing pool in 2014. According to Bloomberg.com, based on data released by the Green Bay Packers, the pool grew by 21 percent to $7.3 billion. The billions and billions of dollars were spilt amongt the league’s thirty-two teams, with each receiving $224.4 million. Most of the money “comprises mostly television revenue and also includes national sponsorships, licensing, and most merchandise sales,” says Bloomberg. The Packers are the only publiclicy owned franchise, which is why we get to see the huge numbers the NFL brings in. Thanks, public.

The league last year also sold CBS the rights to eight Thursday night games for what Guggenheim Securities estimated was between $250 million-$300 million. There will be another increase next season, as the Thursday night contract was renewed in February and the league reached an eight-year, $12 billion agreement with DirecTV through 2022.

Murphy said that while league revenue has grown in areas outside of television -- such as NFL.com and NFL Network -- broadcast rights are a “high percentage” of each team’s revenue share.

All that cool stuff you film (or at least that you think is cool) on your GoPro can now be turned into cold hard cash, bro. GoPro recently announced that they want to pay you for that footage so they can license it to advertisers. According to AdWeek, “videos start at $1,000 apiece, depending on the extent of commercial use and distribution.” More from AdWeek:

Insiders predict GoPro Licensing could grow into a significant contributor of revenue for the company. Its timing seems fortuitous. Video ads are now a $7.7 billion industry, per eMarketer. And the marketers that produce that content seek a higher level of creative. Forty-eight percent of marketers polled by PAN Communications this past March expressed a lack of confidence in their content.

"I believe licensed video is another step in the evolution of user-generated content in brand marketing," said David Karnstedt, CEO of branding consultancy Quantifind. "There is a significant demand from marketers for quality video content, and with proven economic models from [periphery incumbents like Getty Images and Shutterstock], I believe this new market could be a significant value-creation event for GoPro."

I honestly don’t know how you would have missed this, but I’ll recap just in case you decided to take a trip to the moon last week. Some punk-ass shark tried to step to pro surfer Mick Fanning in the middle of the World Surf League’s J-Bay Open in South Africa. Manning, not having any of it, punked the shark out and then conquered the world later that same day.

There could be two next year, according to a report by Motorsport.com. One team that looks like it will happen is headed by Gene Hass, founder and president of Haas Automation. Haas already owns a successful NASCAR team. The other group, according to Motorsport, is headed by “New York financier James Carney and Austin businessman Tavo Hellmund, who developed the Circuit of the Americas track and cut the deal with Bernie Ecclestone to bring F1 back to the country.” The second group plans to purchase an already existing team.

Sources have suggested it is the British-based Manor team, which is currently controlled by Irish businessman Stephen Fitzpatrick, founder of Ovo Energy.

The team, with drivers Will Stevens and Roberto Merhi, is currently pegged to the back of the grid - using an updated 2014 chassis and last year's Ferrari engine.

It originally entered the sport in 2010 as Virgin Racing, and the team’s major highlight – a ninth-place finish by driver Jules Bianchi at Monaco to secure it tenth place in last year's constructors' championship – was later followed by an enormous low with Bianchi’s crash, which left him in a coma. [Note: Sadly, Bianchi has since passed due to the injuries incurred in the crash.]

Will Leitch, founder of Deadspin, now at Sports on Earth, has put together his second “Ultimate College Football Road Trip,” where he draws out a way for you to attend fifty-one college football games this year. While it seems like you could probably attend more, that would require flying, which is disallowed. This gives me an idea—can we find fifty-two moto destinations within driving distance next year? Weege?

Last year we hit 52 different games. Let's see if we can beat that this year.

An ACC/SEC clash kicks off the season in style, and it even starts early enough -- 6 p.m. ET -- that you can get some sleep postgame.

It's tradition at this point: You have to see Georgia State at the Georgia Dome the first weekend of the year. (We had a blast doing it last year.) The Georgia Dome has only two more seasons left before that crazy-looking new Atlanta stadium is completed, and watching a game with 12,000 fans in a stadium that holds 70,000 at the beginning of our journey will help you appreciate the excitement that's coming later in the year. Plus, you will need this early start time -- 3:30 p.m. -- because you have a long drive tomorrow.

Check it out the full run down here.

Fan of the Week

We made the editorial decision a year or so ago to no longer run our "Fan of the Week" feature on Racer X Online. But, we had to bring it back for this guy lurking in the pits at Spring Creek this past weekend. Do we have a new Whoops Monster on our hands?

Hold the phone. How did that happen?

[Kidding. Racer X cannot legally recommend dropping out of school. Or at least I think we can't.]

Tips for Riding on Another Man’s Motorcycle

Embattled FIFA president Sepp Blatter held a press conference this week announcing that he would not stand another term in the new FIFA elections, which is strange because he already resigned earlier this year. Why would you need another press conference? Before he could get to the announcement, comedian Simon Brodkin busted up the party and made it rain on Blatter with fake money saying, “This is for North Korea 2026.” Awesome!

If you ever want to meet your favorite rider in person, just drop by the local Chipotle the day before a race. Seriously, you will see just about every rider walk through if you hang out long enough. This week, a 23-year-old from Los Angeles has gotten a bunch of attention after eating Chipotle 153 days in a row. While on the surface that seems like a lot, any desk jockey can till you it probably isn’t. Going to the same lunch place day after day after day is possible, if not the norm for some. Vice caught up with the guy—who apparently doesn’t even like Mexican food.

VICE: Why do you order the same thing every time? I get the same restaurant, but why not tweak the meal to keep things interesting?
Andrew Hawryluk: All this originally started after I jokingly told my brother I'd do it for the 40 days of Lent. But I kept ordering the same thing because I'm into weightlifting, and a big thing in that world is that you have to keep a macronutrient diet and keep a certain ratio of calories and proteins to carbs. Beyond thinking it's the best combination of food, it's all about my macros.

I'm already in pretty good shape, and I don't need to lose weight or anything like that, but I'm doing this whole weightlifting thing because it's another hobby or activity to have. I've been approached about doing modeling before, but never anything related to bodybuilding. I'm open to the possibility of anyone who wants to scout me for modeling, especially if they found me because of my Chipotle love.

What are you favorite Chipotle menu offerings other than the rice bowl you order?
I really like the barbecoa hard shell tacos. It's a huge departure from what I regularly get. It's rare how frequently I order the tacos, and you can see that on my blog. I'll get them with white rice, fajita veggies, mild salsa, and lettuce. I've ordered every ingredient on the menu at least once—minus the burrito and the quesarito.

Check out the rest of the interview on Vice.

ESPN is called the World Wide Leader for a reason—it holds rights to just about every major professional sport in the world. It basically prints money, too. With more and more people “cutting the cord,” the premium to carry live sports has increased—it’s one of the major reasons people still have cable. But even that has shielded ESPN from losing subs, as Forbes recently reported that ESPN has lost 3.2 million television subscribers over the past year. ESPN is still in 92.24 million homes, according to the Sports Business Journal, but that’s down more than 7 million homes since May 2011. From Forbes:

Some analysis points to consumers looking to cut costs by going to more slimmed-down versions of cable/satellite subscriptions, but the drop of ESPN subscribers is an outlier of sorts around the sports world. The first quarter of 2015 saw Fox Sports 1′s viewership increase by 73 percent from the prior year. And while ESPN’s primary station is still leading all cable sports networks in ratings, Fox Sports 1 and NBC Sports Network just surpassed ESPN2. It’s a minor gain for rival networks, but it also represents a changing of the tide.

Heck, if you look at the total prime-time ratings for ESPN in comparison to Fox Sports 1 in the week ending on July 5th, a trend away from the powerhouse in Bristol is becoming increasingly evident. ESPN saw 593,000 viewers compared to 405,000 for Fox Sports 1.