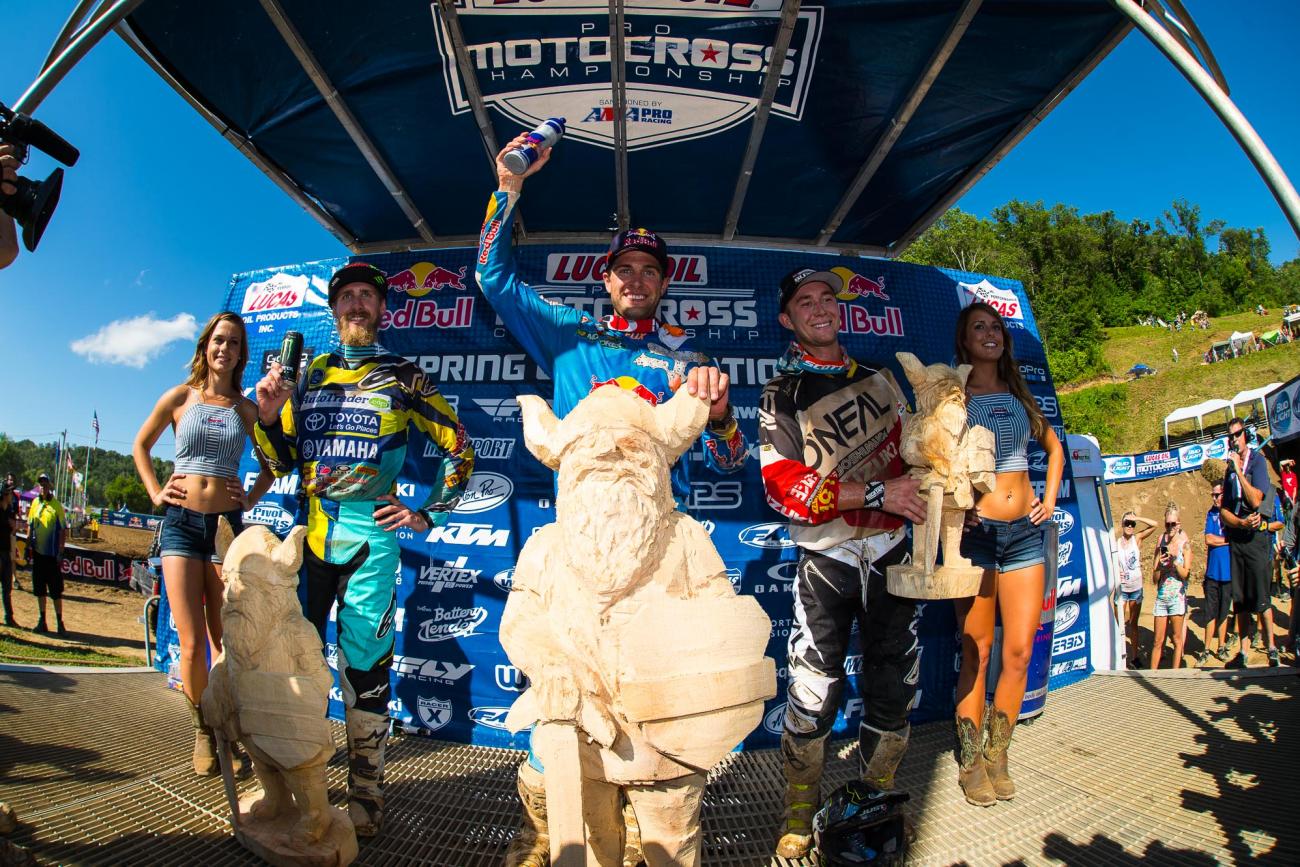 Round eight of the Lucas Oil Pro Motocross Championships took place today under sunny skies in Millville, Minnesota. One of the very best tracks on the circuit, the racers were greeted with a very wet track for the first set of practices but by the time the motos were ready to go, it was a primo track in front of a ton of fans.

Minnesota’s own Ryan Dungey of the Red Bull KTM team took another win in the 450MX class, this time via 1-1 finishes—the first time he had done that this year. Both motos Dungey had to get around AutoTrader.com/JGR Yamaha’s Justin Barcia, but he made a couple of slick passes on the rider that had won the last two races to stretch out big leads in both motos. Dungey’s win in front of his home fans was his first in two years at the track he grew up and extended his points lead to 56 points over RCH Suzuki’s Kenny Roczen, which is over one race. The title looks to be going to Dungey and maybe a race or two early at that.

"The track was difficult today, but I was looking forward to it. This place can get rough and I enjoy it when it does," said Dungey, who won at Spring Creek for the fourth time and is now the second-winningest rider at the facility. "I got a good start in the first moto and was able to get around Jusitn [Barcia] early, then I just rode my own race. In the second moto it took a little longer, but I really wanted to get that 1-1 since I hadn't done that yet this season. The bike was really working great and I was really able to get down the hills well. I knew that if there was a pass to be made, that's where it would be."

Barcia followed Dungey in both motos to go 2-2 on the day and really give Ryan the only trouble he encountered all day. Barcia also showed that his bike has the right amount of power by grabbing the holeshot in both motos.

"I felt good all day. I got good starts and that was huge," said Barcia. "Ryan [Dungey] just had a little bit more than me today. I tried to do all I could but it didn't happen, so that's a little frustrating. I saw where he was faster, but I couldn't figure it out for some reason. Overall it was a frustrating day because I knew I was good in places, but I just couldn't make it happen."

Yoshimura Suzuki’s Blake Baggett had a terrific race in going 4-3 for third overall. In the second moto he was over ten seconds down to the defending champion Roczen and tracked him down before making the late race pass. It was the second podium of the year for Baggett, this being his rookie year in the 450 class. Roczen went 3-4 for fourth overall.

Both of Barcia’s teammates Weston Peick and Phil Nicoletti were right up front off the start but didn’t have the same success as Barcia. Peick fought bike problems in both motos and Nicoletti admitted afterwards that the pace caught up to him a bit and he got winded. HRC Honda’s Freddie Noren had his career best moto finish in the second moto with a strong fifth. Noren’s teammate Cole Seely came back from missing a race with an injury bit proceeded to crash in practice and he sat on the sidelines once again.

In the 250’s, the crowd was eagerly awaiting a Martin brother podium as both Jeremy and Alex had been killing it this year and with their father owning Millville and them growing up on the property-big things were expected.

But the brothers both ran into problems in that Jeremy’s clutch lever came loose in the first moto and he wasn’t able to finish any higher than third. And Alex, after finishing a strong fourth in his first moto, got a poor start in the second moto and was forced to come from basically last. Jeremy did go out in the second moto and crush everyone for 3-1 motos scores and Alex’s 4-14 put him tenth overall.

After a heartbreaking RedBud two weeks ago, Martin’s teammate on the Yamalube/Star Racing team, Cooper Webb, took his first race win this year with 1-2 moto scores and become just the third winner of the series in eight races. Webb ripped though the pack in the first moto (including getting by Martin) for a commanding win. Yes, JMart’s clutch was an issue, but Webb still rode fantastic.

Webb commented after the day that he was dealing with an “angry” Jeremy and he knew that he had the overall if he stayed in second so that’s what he did. Webb’s out of the points race after missing the first three and a half races, but he’s certainly going to be a factor from here on out.

"The day went really good for me. I just felt solid all day," said Webb, who missed four rounds earlier this season with an ankle injury. "I didn't get a great start in the first moto, but I was able to make some passes and pull away once I got into the lead. I got a better start in the second moto, but it was behind Jeremy [Martin] and I know he was motivated [to win]. I knew 1-2 [finishes] would get the job done [for the overall] and since I'm not in the points chase it was important to play it smart."

Monster Energy/Pro Circuit’s Joey Savtagy has been up and done this outdoor season and Millville was a good one for him with 2-4 finishes and third overall on the day. Savatgy said that he had worked on something physically with himself over the break and whatever it was, it helped big-time.

Red Bull KTM’s Marvin Musquin will probably be sitting there wondering what could be after the race. Musquin jetted into the lead in the first moto and was riding great, pulling away from the field. Then a crash set him back to tenth, he worked his way to fifth, crashed again back to tenth and put his head down to salvage eighth. The second moto he took a calmer third but lost more points to Martin as the gap is now nineteen. The good news for the Frenchman is that this weekend is Washougal, one of his best ones.

Bad day for GEICO Honda’s Christian Craig who fell on the first lap of the first moto and hurt his shoulder. Craig tried to tough out the second moto but it didn’t work and in his adopted state, Christian went DNF-DNF. CycleTrader.com/Rock River Yamaha’s Luke Renzland had a career best race with 13-15 finishes and GEICO’s Jordon Smith had a strong fifth place in the second moto.