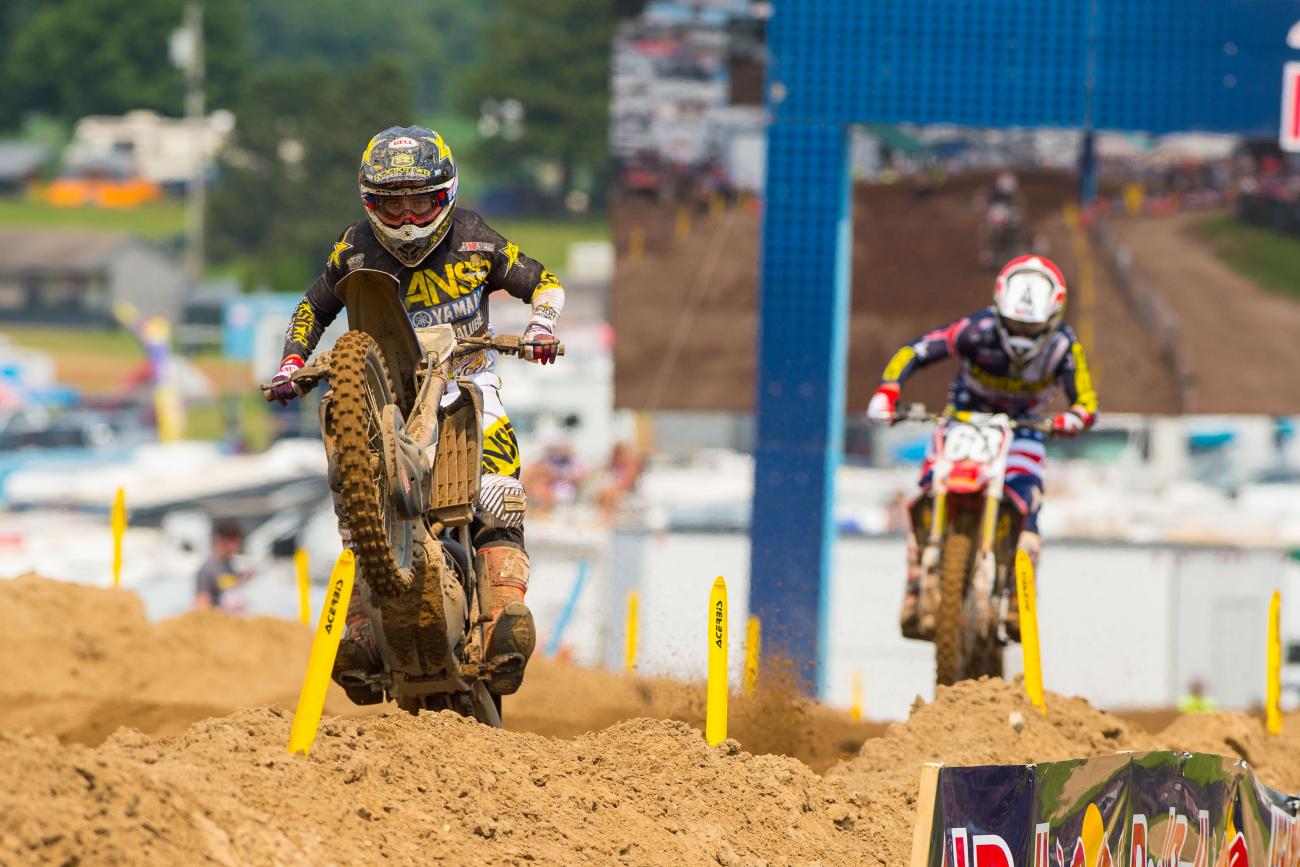 Justin Barcia’s win at Budds Creek was great, but beating Ryan Dungey straight up in the dry conditions at RedBud in the second moto means much more. It produced his second overall in a row, and nobody can dismiss it as a sloppy wet fluke. Sure, Dungey still has a massive 44-point lead over Ken Roczen (and 63 on Barcia), but he still wants to win races, and the last thing he wants is a wild child nicknamed Bam Bam running it in on him constantly. In other words, Dungey needs to put a confidence-smashing beat-down on Barcia this weekend unless he wants to deal with him every moto for the rest of the season. –Aaron Hansel

Most motocross tracks have a left-handed first turn so riders have good access to the rear brake pedal as they dive into turn one with thirty-nine other riders. Spring Creek is different—its extremely long start stretch funnels into a right-hander that’s followed by an uphill and another right-hand turn. Getting a good start here can be tricky, and it’s not uncommon to see riders unintentionally swing wide and even off the track. We’ll see whom this technical feature claims and who can holeshot like Ryan Dungey in 2014.  -Hansel

Another race, another championship leader. That’s been the story in the 250 Class, making the red plate seem like an indecisive girlfriend who can’t choose between Marvin Musquin and Jeremy Martin. Last race was no different, as Martin overcame arm pump to record an outstanding 1-1. Musquin, on the other hand, battled wrist pain stemming from his big crash back at Thunder Valley, and went 4-6 for sixth overall, causing him to lose the lead. If the reciprocating trend follows, he’ll get the lead back this weekend, but with Spring Creek literally being Martin’s home track, look for him to hold Musquin at bay, both on the track and in the points. –Hansel

Predicting the 250 podium is tough these days. Martin and Musquin have been on it a lot this summer, so it won’t be a surprise if they end up there again at Spring Creek, but it’s anyone’s guess who else might be standing on the box at the end of the day. Cooper Webb is a solid pick, Zach Osborne has been coming on strong lately, Jessy Nelson is due for another, Christian Craig has been extremely impressive, Alex Martin is a constant threat, Joey Savatgy has the speed to make it happen, and it wouldn’t be that surprising if someone like Chris Alldredge, Shane McElrath, Justin Hill, or several other races rounded it out. We’ll find out on Saturday. –Hansel

In case you haven’t heard, Monster Energy Kawasaki’s Wil Hahn injured some ribs while practicing and is out until Unadilla at the earliest. Rather than skip races or go without an active rider, the team decided to sign Josh Grant, who was left without a ride when TwoTwo Motorsports folded, for the remainder of the season. The bike isn’t identical to his TwoTwo bike, but he’s been on a KX450 all year, so don’t expect him to be lagging this weekend at Spring Creek. -Hansel

Cooper Webb had RedBud. Twice! The first moto was on lock until Jeremy Martin launched a huge charge and got to him on the last lap. Cooper made a strategic error by changing lines to block him and then blew a turn, allowing Martin by for the win. Second moto, in the same corner, he dumped it in the ruts while holding the lead. Cooper, still working his way back from early-season ankle problems, has had an off-weekend to train and plot his revenge. He won the second moto last year at Millville. Don't expect him to settle for anything less than a victory this weekend, no matter how it impacts the points, or who is racing in front of the home fans. –Jason Weigandt

Man, every time you have Ken Roczen figured out this year, it changes. He looked so out of sorts at Hangtown that we braced for the "Done for the season with back surgery" PR, but instead he turned things around rapidly to win motos and an overall. He expected to be really strong after the break, but then he took a step back at Budds Creek and RedBud. After another break, we're left guessing again. Will we get the High Point Kenny or the RedBud Kenny this weekend? –Weigandt

All in the Wrist

Marvin Musquin gave up a ton of points at RedBud because his wrist started acting up. He told us he'd had painful days during the week, but had been lucky to get the pain under control at each race until then. A weekend off might help, but Marvin says the RedBud downhills were especially painful, which isn't good since Millville's downhills are even bigger. If Marvin wants to stay in this chase, he needs a pain-free day at the races. –Weigandt

Must Protect This House

Ask around and you’ll be hard pressed to find anyone that doesn’t think Alex Martin can win a moto, or better yet the overall, this weekend at his home track. Martin, like his brother Jeremy, has spun more laps “than they can count” at the track and won seventy-seven races there as an amateur. Yet, since making his pro debut at his home race in 2008, Martin has just one top-five overall finish there, back in 2011. Since 2008, he’s averaged an 11.7 overall finish at Millville, with his best moto finish a fifth in 2011. The elder Martin is having a banner year in 2015; will it carry over to his home quarters? –Chase Stallo

“…I’m not really sure if I’m ready. The knee is still really tender, and it’s still a little swollen,” Andrew Short told Racer X earlier this week regarding his return to racing this weekend. Short, who has been out since the East Rutherford Supercross with a broken kneecap, makes his 2015 Lucas Oil Pro Motocross debut Saturday at Millville. But he’s not expecting much—except maybe his patented third-gear start: “Oh, I’m going to go for it at Millville [laughs]. I’m not sure if it’s going to work or not, but that’s all I’ve been practicing at home.” Short said he doesn’t expect to be fully competitive until round ten at Unadilla, but he knows he doesn’t have a lot of time left in professional racing, so he wants to spend it on the track, not the couch. –Stallo