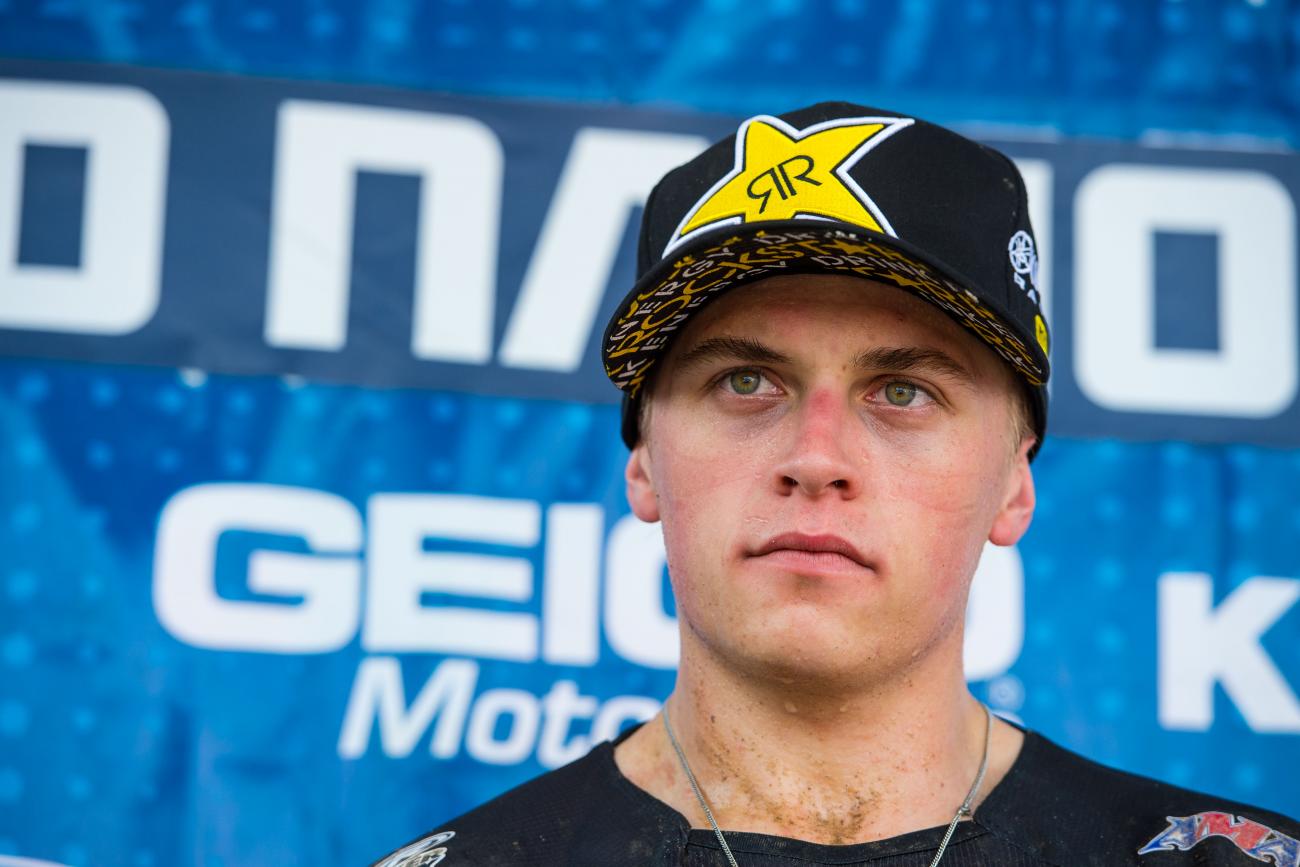 We finally saw the long-awaited Jeremy Martin/Marvin Musquin battle at the Red Bull RedBud National, but both were nearly upended by a resurgent Cooper Webb, who led late in both motos before coughing it up to Martin each time. JMart will take it, as his 1-1 puts him back into the series’ lead in Lucas Oil Pro Motocross. He talked about in the post-race press conference.

Racer X: Obviously a great day for you going 1-1. You seemed to put yourself in a very good position, as other people had a couple problems. It was almost like you the week before, when you were leading, went down, and Alex got his first win.
Jeremy Martin: Yeah, I got off to two really good starts. Was actually leading the first moto there for a little bit and then my arms got rock solid. I made a mistake with the suspension between the last practice and the first moto. Really struggled for a while and those guys passed me. I was like, oh man, here we go. But I was able to turn around and get back up there.

A couple passes came on the face of LaRocco’s Leap. I believe you were going inside drifting outside and causing them to take away their line. That was sort of a risky game to play.
Yeah, it is, for sure. But actually I was going outside most of the time, to be honest. Marvin [Musquin] got me there one time. He went inside and cut me all the way off. It was definitely risky because I’m coming mach 10 around the outside. But it’s good. It’s just a racing move and in the heat of moment. We’re all battling like that. We’re so close that every little bit matters.

It seems like there’s been a couple first motos like that for you. I think the first moto of the year at Hangtown, first moto at Muddy Creek, and here, where it takes you 10 or 15 minutes to get going. Has it been the arm pump each time or is it something different?
No, today it was arm pump and then second moto I was right in second there behind [Christian] Craig and then Marvin ran in really fast on the downhill. Slammed the berm so hard he almost fell off the bike. He did run it in hard. And then Cooper got a two for one special running around the outside on us! Marvin and I, we just battled today. I remember going to bed last night talking to Johnny [O’Mara, trainer] and I’m like, you know what, tomorrow is going to be a show. Tomorrow is going to be the day that I’m going to battle with number 25. And sure enough we were battling. We’ve kind of been dodging each other all season but today is the day that we battle.

What was that like, to actually battle with him? I guess you saw him a little bit last year outdoors and some in supercross but are there things you see from his style, compared to your style?
Yeah, Marvin’s a phenomenal racer. He’s smart. He’s very fast. He knows what he needs to do. He’s got good people around him. It’s good. He’s a really good racer. He keeps me on my toes.

Second moto it looked like Cooper Webb had it. You guys come around a corner. You’re battling with Craig and he’s on the ground. Did you see that coming? What was your reaction?
We came over that little table top before the rollers and I saw that the yellow flag was out. I was like, maybe that’s Cooper. And then we were going pretty slow because Craig saw it too. I was like, that’s a blue machine, that’s Cooper. And then Craig didn’t know what to do because the ruts were really deep out of there. And I was like, this is my opportunity, and I made the move and was able to get them both. I got lucky in that second moto.

Were you tracking Cooper? Did you think you had time? Did you know where he was or were you just worried about Craig at that point?
I was keeping an eye on Cooper. I saw I was starting to inch in at the end there. I think my mechanic pit boarding me and telling me their lap time and my lap time, I could see that I was starting to close in. I think what it could have come down to probably was the last lap again.

How much do you attribute this to your fitness? I know you’re real big on the training and both of these motos at the end is where you really did your damage.
Yeah, I think for sure the more fit you are it just makes your life that much easier on race day. I’ve got a huge wakeup call from working with Johnny. The more fit you are the better chance you have of every time you ride your dirt bike you’re going to make smarter decisions because you’re not tired. You’re not going to fumble. And even if you do hit the ground you have a better chance of walking away because you’re more fit. I think that’s very motivating to me.

I’m going to ask a Millville question. It was big for you to go there last year and win it. Now your brother’s on the gas and winning motos also, so how crazy is this going to be? There could be two Martins gunning for the win! Is it almost going to be too crazy?
No, Alex and I train together still. We’re still going to do it leading up to Millville. It’s good. It’s family racing and Millville’s coming up and he’s going to try to beat me but I’m going to show him who’s boss [laughs].

In that first moto I think you were 2.1 seconds down in that final lap. Did you know where you stood?
Oh yeah. I made a mistake in the first moto right before the last lap and I was like, dude, I’m really going to have to dig deep to try to get back up on him. And then I was fortunate enough to get up on him and then in the corner he went down in moto 2, he took the same line I was taking but he came in so hot he kind of blew the inside and had to drift outside. I was like, thank you, because he gave me the inside, and I got the lead.

That mistake you mentioned, on the lap before you made the pass on Cooper, the turn before LaRocco’s Leap it looked like you tried to take the inside. Did the berm just blow out?
Yeah. There’s a really nasty kicker or hook in there and I hit it so hard I just bogged down really bad. Track was definitely tough!